Warren Johnson was winning races and championships on the IHRA mountain
motor Pro Stock tour long before he became the legend he is today in
the NHRA POWERade Pro Stock ranks. Johnson said this success in the big
engine class provided a springboard to his career.

When Johnson came to race, he came to win – whether he was running his
“Hulk” Camaro or the cars he drove for Georgia businessman Jerome
Bradford. For that matter, his venerable Oldsmobile-bodied entries fit
into that category.

Johnson accomplished two feats in one season back in 1979. Winning his
first world championship was incredible, but his triumph halted the
total domination of “General” Lee Edwards, the first two-time champion
in the class.

Thu, 2007-09-27 08:51
Scenic National Trail Raceway will be jammed packed this weekend as several
hundred of the nation’s best sportsman drag racers make their way to Columbus
Sept. 28-30 for the third annual JEGS NHRA Northern SPORTSnationals. The racers
will be competing for a share of more than $65,000 in cash and $400,000 in
contingency postings that are available in the following NHRA eliminators: Comp,
Super Stock, Stock, Super Comp, Super Gas, Super Street, Top Dragster and Top
Sportsman. The Spitzer Race Cars Top Dragster class and the Dart Top Sportsman
category will also run at this event, as well as the popular Mopar Performance
Super Stock Hemi Challenge.

In addition to the huge cash prizes, the JEGS Northern SPORTSnationals
presents one of the last opportunities in 2007 for sportsman racers to earn
points towards NHRA Lucas Oil Series national and divisional championships.
Racers in Comp, Super Stock, Stock, Super Comp and Super Gas can earn points
towards national championships while Super Street, Top Dragster and Top
Sportsman competitors will be racing for divisional points. The points battles
in almost every eliminator are close meaning that this event could go a long way
towards determining the 2007 NHRA champions.

While the sportsman racers are the undisputed stars of the JEGS NHRA
Northern SPORTSnationals, fans who attend the event on Saturday will also be
treated to a the Hot Rod Heritage car show and exhibition runs by nitro-burning
front-engine Nostalgia Top Fuel Dragsters and Nostalgia Funny Cars.

The Las Vegas Chapter of Speedway Children’s
Charities will hold its fourth annual “Cards for Kids” Texas Hold’em Poker
Tournament on Wednesday, Oct. 24, at the Cannery Hotel & Casino.  The
charity event will kick off the NHRA AC Delco Las Vegas Nationals Oct. 25-28 at
The Strip at Las Vegas Motor Speedway.

Tournament players will have the opportunity to
play against NHRA drivers, including Brandon Bernstein, Melanie Troxel, Morgan
Lucas, Dave Connolly and “Fast Jack” Beckman and the list is expected to grow.
Entry fee (buy-in) is $250 and players will receive $1,000 in tournament
chips.  Players also will receive complimentary hors d’oeuvres and drinks
throughout the evening.

No matter what form of Pro Stock racing he participated in, Ronnie Sox excelled.
When the IHRA converted to the mountain motor configuration in 1977 Sox
immediately began to qualify at the top of the fields.

If not
for a broken engine Sox would have been in the final round of the 1977 IHRA
Winternationals at Darlington, SC. The IHRA’s break rule replaced Sox after a
semifinal victory over Harold Denton.

Denton
went on to score the win over Roy Hill. That victory could have belonged to
Sox.

Sox
went to an incredible 25 career finals in IHRA competition and he emerged
victorious 14 times. In fact, when the IHRA staged its very first national event
in Rockingham, NC, Sox took home the trophy.

Wed, 2007-09-26 19:41
Several hundred of NHRA’s best sportsman drag racers will converge on National
Trail Raceway for this weekend’s JEGS NHRA Northern SPORTSnationals, but only
eight will have the opportunity to win the coveted JEGS Crown. The JEGS Crown is
a beautifully handcrafted trophy, which was designed and created by Dan
Dreisbach, the head fabricator at Rahal Racing. In order to win it, a racer must
claim two victories in the same class at the Jegs.com NHRA Cajun
SPORTSnationals, which was held last April in Belle Rose, La., and this
weekend’s JEGS Northern SPORTSnationals.

The JEGS Crown trophy might be one of the most difficult awards in all of
drag racing to earn. In three seasons, it has only been awarded once; to former
Pro Mod champion and current nitro Funny Car star Mike Ashley, who won both
SPORTSnationals events in 2005 while racing in the AMS Pro Mod Series.

CSK Auto, Inc. has exercised its option to renew its primary sponsorship of
Del Worsham's NHRA Nitro Funny Car for the 2008 season, which will mark the
12th year the auto parts company has backed the successful and popular
driver from Southern California.   In conjunction with the renewal, the
company and racing team have announced a shift in their marketing strategy,
as they now will focus their resources on Worsham's car alone.   CSK has
sponsored two Checker, Schuck's, Kragen Funny Cars since 2000, with a
variety of drivers filling the seat, including Jeff Arend who is

"Our
partnership with Del Worsham and his organization has been very beneficial
to us for 11 seasons, and we're extremely excited to renew our agreement
with Del for 2008," said Jim Schoenberger, Vice President-Marketing for
Phoenix-based CSK Auto.  "In today's business world, highly focused and
nimble organizations are the ones best able to lead the way, and we feel
it's in everyone's best interest to place all of our focus on Del and his
red Checker, Schuck's, Kragen team in 2008, rather than spread our support
and the team's infrastructure over two duplicate
organizations.

"Having been associated with Del, his father Chuck, and
the Worsham Racing organization since the start of the 1997 season, we're
all excited to extend what has been a very successful relationship through
the 2008 NHRA POWERade season.   This excitement extends from our
corporate office, through our distribution centers and store crews,
right into the heart of our customer base.  We're all great fans of NHRA
Drag Racing and the Worsham team." 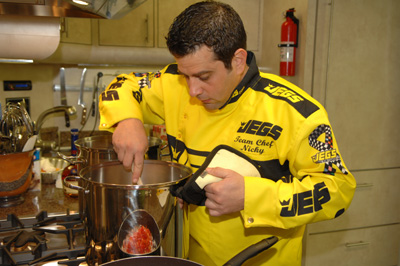 The most accomplished chef in motorsports will bring his unique and rollicking
blend of culinary and hot-rodding experiences to the small screen when FSN Ohio
debuts The Racing Chef at 10 p.m. ET on Oct. 8.

The reality-style show follows
the exploits of Team JEGS chef Nicky Morse as he crisscrosses the country on
the NHRA Drag Racing Series, chasing down exotic ingredients and cooking up
world-class cuisine for the Coughlin family and members of the Team JEGS racing
crew.

“Its a cooking show, a backstage
racing pass and a travel adventure all in one – not to mention a rare personal
glimpse into the Team JEGS racing experience,” said Don Lee of Horizons
Companies (www.horizonscompanies.com), the
Columbus, Ohio-based company producing the The Racing Chef. The idea for the
series was hatched by Lee and Morse, along with Scott Woodruff, director
of media and motorsports marketing for JEGS.

Billy Huff had been exposed to drag racing for much of his life and it showed
when he got behind the wheel of a mountain motor Pro Stocker. As a rookie, he
drove like a seasoned veteran.


The
son of veteran sportsman racer Sherrill Huff, Billy Huff won a national event in
his rookie season of running IHRA Mountain Motor Pro Stock in 1991. That was
enough to land him in the eighth position in the championship points.

Several months ago Torco’s CompetitionPlus.com was vilified by some for
reporting that the stock price of Bravo! Brands, the parent company of
Slammers milk products, was rapidly declining.
Slammers was the primary
sponsor of Dave Connolly’s Pro Stock Chevrolet, and an associate sponsor of
Jeg Coughlin Jr’s car at the time. Shortly after our story appeared the
names disappeared from the flanks of those cars. 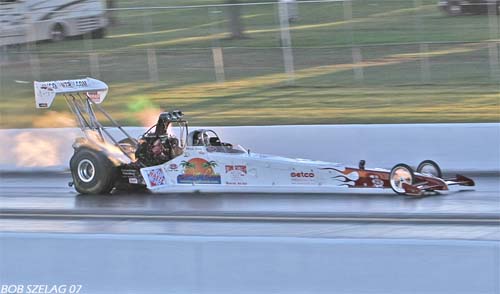 Dave Gallegos, 39, of Saint Mary’s, ,
acquired his IHRA Top Fuel competition license last Sunday at
behind the wheel of Mitch King’s La King’s Confectionery machine.  The former bracket racer competed for years
and before becoming a nitro crew member back in 2005.

Gallegos made some runs earlier this year in King’s “Bone
Bucket” AA/Fuel Altered during competition with the Outlaw Fuel Altered
Association. His licensing enables him to achieve a personal goal of obtaining
his IHRA Top Fuel license.