FINAL ROUND RESULTS FROM CHICAGO

Sunday's final results from the 10th annual Torco Racing Fuels
Route 66 NHRA Nationals at Route 66 Raceway. The race is the ninth of
23 in the NHRA POWERade Drag Racing Series: 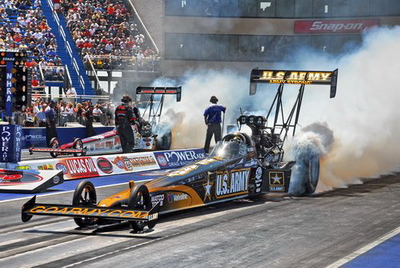 The
10th annual Torco Racing Fuels Route 66 NHRA Nationals will shake up
the Countdown to the Championship standings, particularly in Top Fuel,
where the seventh and eighth place drivers each failed to qualify.

In Top Fuel, No. 7 Dave Grubnic and No. 8 Whit Bazemore -- the last two
in if the 17-race regular season ended today -- each failed to qualify,
opening the door for ninth-place Cory McClenathan and 10th-place Bob
Vandergriff.

Vandergriff's UPS team stands to make the biggest move. It already
passed McClenathan's Fram team with better qualifying position and
Vandergriff can pass Grubnic and Bazemore as well with a first round
win Sunday.

Gary Scelzi said that he had
bad vibes during Saturday’s qualifying and some were confined to his Oakley
Funny Car and others weren’t.

“The car has had a
vibration out there,” Scelzi said. “We changed some tires and did some
different things. There are vibrations on the burnout and vibrations during the
run. I’m not sure where it’s coming from and I don’t like going into Sunday
with that kind of a car.”

“Basically one good run out
of four is not the car we had in ,”
Scelzi said. “I’m actually surprised that it didn’t make it down on the last run.
We had it backed down. We just went out and shook the tires.”

Scelzi said he had yet to
see the computer graph, so it was impossible for him to comment on what
happened during the run. But, he has an idea.

It’s all about the track
prep.

Heading into the final rounds, the Division 1 team held a slim
100-point (one-round) lead over the Division 4 squad, and the Division
2 and Division 6 teams were still mathematically in the running.
Division 4 racer Craig Abbott tied the score with his win in Super
Street, but the Northeast Division squad slammed the door with
consecutive wins by Linke, Iacono, Biondo, and Manzo. Iacono's Super
Stock win officially clinched the title and the $20,000 bonus that
accompanies it.

No. 1 qualifiers are
Schumacher, Scelzi, Anderson and Hines 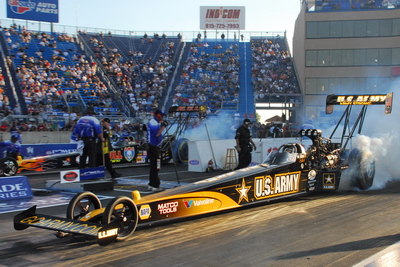 Schumacher's 4.462 at 327.11 mph in Top Fuel got the biggest cheer, but
Scelzi's 4.736 at 330.96 mph in Funny Car was just as impressive. In
Pro Stock and Pro Stock Motorcycle, Anderson and Hines thrilled with a
pair of track records.

Unlike year's past, Schumacher's provisional top qualifying effort
didn't set him far apart from the rest of the Top Fuel field. But it
was enough to set the four-time champ up for his fourth low qualifying
award of the year on a weekend when his sponsor, the U.S. Army,
celebrates its 232nd birthday.

"Alan [Johnson, crew chief] said before the run that the track would
take whatever we threw at it and he was right," Schumacher said. "I
always used to say that qualifying No. 1 wasn't that important but
after winning
the championship by just a few points it really was all those No. 1
qualifiers we had that made the difference in the end."

More accustomed to blasting down the quarter-mile at 330 mph in under five
seconds, Ron Capps demonstrated his non-drag-racing expertise by mixing it up on
the dirt with NASCAR and other oval-racing stars on Eldora Speedway's half-mile
clay oval last Wednesday in the NEXTEL Prelude to The Dream charity race.

The
driver of the Brut "Test Drive" Dodge Charger R/T Funny Car at this weekend's
Torco Racing Fuels NHRA Nationals at Route 66 Raceway qualified in the top 10.
With an inversion system, Capps landed on the front row for the first qualifying
heat. With lots of action in front and behind him, including Bill Elliott
spinning and Jeff Gordon scraping the wall, Capps restarted fifth after a short
caution. Fifth place would have transferred him into the top 11 of the A-main.
He held onto that spot until the final lap, when Elliott, with whom he'd had a
spirited battle, passed him then proceeded to flip over in a crash with Ryan
Newman at the finish.

Want to match drag racing skills with some of the NHRA’s best racers?

It can happen starting this weekend when Ford
Racing launches a new interactive display for race fans at the Torco Racing
Fuels Route 66 NHRA Nationals in Joliet, Ill.

In the John Force Shootout, consumers race against each other on a
virtual drag strip for times that are recorded for the day and measured against
an earlier time established that weekend by a member of John Force Racing:
either 14-time champion John Force, his daughter Ashley Force, or their teammate
Robert Hight.

In what promises to be an extraordinary showcase event pitting a NHRA Pro FWD
racecar against a competition airplane, Team Chevy's Gary Gardella and Red Bull
Air Race World Series pilot Kirby Chambliss will face-off in a series of
specially synchronized eliminator rounds that will feature Gardella's
Ecotec-powered Cobalt and Chambliss' EDGE 540. The "Air and Asphalt" media-only
event will take place at Atco Raceway on Wednesday and Thursday, June 6 – 7,
just days before the running of the NHRA Northeast Sport Compact Nationals.
Photos and video of the event can be seen on www.gmtunersource.com.

"We'll be shooting down the
quarter-mile, going through our normal routine, and it will be a little bit
different because we're either going to have the plane ahead of us or behind
us," said Gardella. "Once we start doing the burnout, they'll cue for the plane
to come in, and as he comes in, he'll start flying straight up in the air. As I
move the Red Bull Chevrolet forward into pre-stage the plane will actually start
its way down. As soon as I hit stage, he's going to do a maneuver that will take
him straight down the track and then I'll launch.

For an NHRA sportsman racer few things are more prestigious than winning the
annual JEGS Allstars event at Route 66 Raceway in Joliet, Ill. A special event
that highlights the best Lucas Oil Series racers from all over the North
America, the JEGS Allstars features eight car fields of competitors in eighth
NHRA classes – Top Alcohol Dragster, Top Alcohol Funny Car, Competition
Eliminator, Super Stock, Stock, Super Comp, Super Gas, and Super Street – and
features a total payout of more than $100,000. Competitors qualify for the
Allstars event by earning points at divisional events throughout the previous 12
months. Each of NHRA’s seven geographic divisions sends a field of eight
drivers, one per class to compete in the event. Defending event winners are also
welcomed back to round out each eight-car field.

The COMP Performance
Group™ is proud to announce the hiring of Brian
Reese as Director of Business Development. As
the former Director of Engineering at SLP Performance Parts, Reese specialized
in aftermarket performance with a special focus on late-model
engines.

Reese is a graduate of
Ohio
State
University with a
Masters Degree in Mechanical Engineering and Automotive Business Management. His
professional career started at General Motors where Reese worked in
Michigan at the
Warren
Technical
Center and Milford
Proving Grounds. After

General Motors, Reese
worked as a Research Engineer for Ohio
State
University’s Center
for Automotive Research (CAR). The OSU research led Reese to Hunt Fuel Systems
in Atlanta,
GA, where he
served as Program Manager for their then new fuel injection
division.