While Stanton is the current ADRL
points leader in the featured Pro Extreme class, Hernandez may be the hottest
Pro Modified driver on the planet.  Wheeling the  “Dr. Moon’s Rage” Chevrolet
for Howard Moon, the Texas driver has won five of seven races this season in the
NHRA Pro Mod Series and was runner-up in a sixth, all but locking up the AMS
Championship.

He also has enjoyed
previous success at The Rock where he was the Pro Modified Champion at the IHRA
Spring Nationals in 2006.

Dragstock IV is the
last of eight races in which drivers can earn points that will determine who
will compete for Flowmaster ADRL championships in the Battle of the Belts at Ennis, Texas.
The top eight drivers after Saturday’s eliminations will compete Oct. 12 in a
showdown event at Ennis,
Texas that will determine champions
in Pro Extreme, Pro Nitrous, Pro Extreme Motorcycle and Extreme 10.5 classes.

Pro qualifying for
Dragstock IV begins Friday with a single session at 8 p.m. followed Saturday by
12 noon and 3 p.m. sessions that will set the fields for final eliminations.  A
single round of racing Saturday afternoon will set the stage for final
eliminations beginning at 7 p.m.

Ed Conrad, 62, Gardenia, CA., died on September 6 at Irwindale Speedway. He was the victim of an apparent heart attack.

Reportedly, Conrad suffered the heart attack in the burnout box and the
car traveled down the track before crashing. Conrad did not appear
injured in the subsequent crash.

"From what the paramedics told me, it was an apparent heart attack,"
Speedway Vice President Robert DeFazio said. "I'm told by witnesses he
slumped over the wheel, passed out, and went down the track a little
ways and stopped."

Speedway safety crews performed CPR on Conrad until Los Angeles County
firefighters arrived. He was transported to Methodist Hospital in
nearby Arcadia where he was pronounced dead.

Even before the term was coined, hot rodders were racing across the dry lakes of southern California in the1930's.
One of them, Wally Parks, who went on to found the National Hot Rod
Association in 1951, helped organize the unorganized racers into a
group called the Southern California Timing Association (SCTA).  Formed
in November 1937, the SCTA held its first race in 1938 and has been
sanctioning races at El Mirage dry lakes and at the Bonneville salt
flats ever since.

To help celebrate the SCTA's 70th Anniversary, The Automobile Club of
Southern California agreed to underwrite an exhibit at the Wally Parks
NHRA Motorsports Museum, presented by the Auto Club of So. Calif.

Opening to the public on Nov. 7, 2007 at 3:00 p.m., (with a media and
VIP reception at 1:00 p.m. the same day) the exhibit will comprise a
number of milestone land speed racing vehicles. They'll include Stuart
Hilborn's Ford-powered streamliner—the first hot rod to go 150 mph; Al
Teague's Spirit of '76, the first single-engined, wheel-driven car to
go 400 mph; Kugel & LeFever's Pontiac Firebird, the first
stock-bodied passenger vehicle to exceed the 300 mph barrier; and,
finally, the Toyota Prius Greensport hybrid which went 130.74 mph at
the Bonneville salt flats in 2004.

FINAL ROUND RESULTS FROM CAYUGA

Monday's final results from the IHRA Canadian Nationals presented by
PartSource at Toronto Motorsports Park. The race is the ninth of 11 in
the $19.5 million 2007 Knoll Gas Nitro Jam Drag Racing Series: 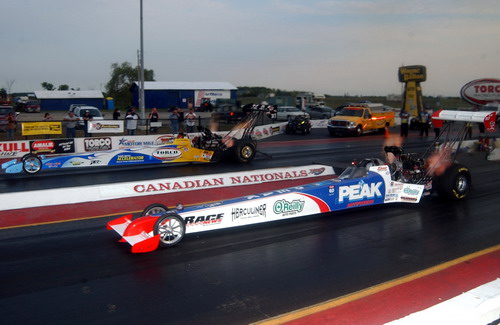 This year's Super Bowl of Bracket Racing, to
be held on September 22 and 23, will feature an extra Super Bonus provided by
Ohio Crankshaft.  The Saturday winner in
Super Pro and the Sunday Super Pro winner will square off in a one round
shoot-out to run for an additional $1500.00.
And, the Pro winner from Saturday will face off against Sunday's Pro
winner for an additional $1000.00.  Ohio
Crankshaft will also provide a unique rosewood acrylic trophy for the shoot-out
winners.  The Super Bowl starts off on
Friday with a test and tune and early parking, with gates opening at 4:00
p.m.  Saturday and Sunday, the gates open
at 8:00 a.m. with cars on the track at 9:00 a.m.  Go to www.dragnews.com for more information.

IHRA officials have announced the Canadian Nationals presented by PartSource
will be completed as an 1/8th-mile competition.

Following a full day of rain on Sunday, the racing surface
at Toronto
Motorsports
Park during
round one of eliminations on Monday began to release moisture near the outside
guardwalls. While that round was completed without problems, the situation began
to worsen as the day went on, therefore forcing race officials to make the call
to finish on the 1/8th-mile.

“Safety is always our No. 1 concern and we are again making the call to
run 1/8th-mile with that in mind,” said IHRA vice president of racing
operations Skooter Peaco. “The water was controllable during first round, but by
the end it was to a point where it is more than we can keep up with now. With
impending rain moving in, we didn’t want to take a chance to not finish
today.” 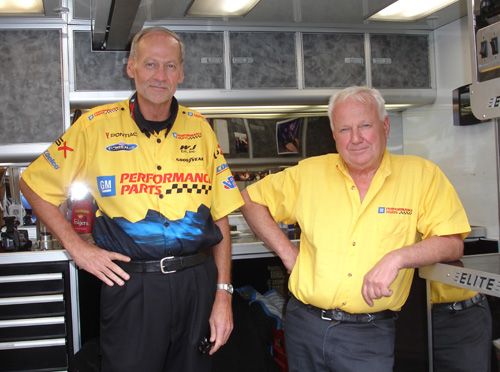 One
of the more prominent storylines entering the 2007 NHRA POWERade Drag
Racing season was Warren Johnson’s hiring of veteran tuner Terry Adams
as the crew chief on the GM Performance Parts Pontiac Pro Stocker.  The
initial public reaction acknowledged that their combined experience
would provide a wealth of knowledge, while questioning how their two
vastly different approaches would work together.

Seventeen races later, drag racing’s self-proclaimed “Mutt and Jeff”
team have established a sound working relationship, which has resulted
in a solid performance on the race track, capturing the seventh spot
for the second phase of the POWERade championship tussle, the Countdown
to Four.  Entering the second race of the NHRA’s version of the
playoffs in Memphis, TN, the two veterans took time to talk about their
season, their relationship and their outlook moving forward.

There’s a real world out there completely unlike the fantasyland
that is drag racing.  It’s a world in which people have bills to pay,
jobs to go to and concerns often far more important that the next four
second run or round of eliminations.  We visit that world when we’re
away from the track, but some of us are so wrapped up in what we’re
doing that what’s taking place in homes all across America sometimes
escapes our notice.

Let’s find out what some of or friends think about other than drag racing.