Sunday eliminations for the IHRA Canadian Nationals presented by PartSource have
been postponed and will be completed Monday.
Rain began early Sunday morning and continued to saturate
the track throughout the day. At 3:30 p.m., IHRA and Toronto Motorsports Park
officials cancelled racing for the day, rescheduling eliminations for
Monday.
After near-perfect conditions Saturday drew a
standing-room-only crowd for the Chevrolet “Night of Fire,” race officials opted
to run three full rounds of sportsman eliminations in anticipation of Sunday’s
rain. That tough call was preceded by Friday’s decision to bump the professional
qualifier up an hour to avoid impending rain. When it began raining Friday night
at 7:25 p.m., only two cars hadn’t been down the track.
“We’ve made two tough decisions already this weekend and
thankfully both have been correct,” said IHRA vice president of racing
operations Skooter Peaco. “The only good thing about bumping Sunday to Monday is
that it was an easy call to make because the temperature is rapidly dropping and
the rain just wouldn’t stop.” 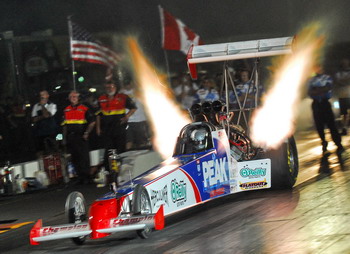 T.J. Zizzo jumped to the No. 1 Top Fuel qualifying position with a track
record-setting 4.576 elapsed time during the IHRA Canadian Nationals presented
by PartSource at Toronto Motorsports Park. 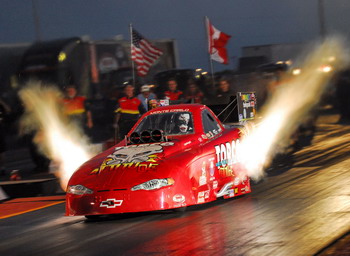 A usually reliable source reports overhearing a conversation between
Tom Compton and Graham Light in the Parks Tower during the running of
the Mac Tools NHRA U.S. Nationals concerning former employee Ray Alley,
which prompted us to track him down.  Prior to his departure from NHRA
late last year Alley was in charge of the three core professional
categories of competition, a position now held by Dan Olson. 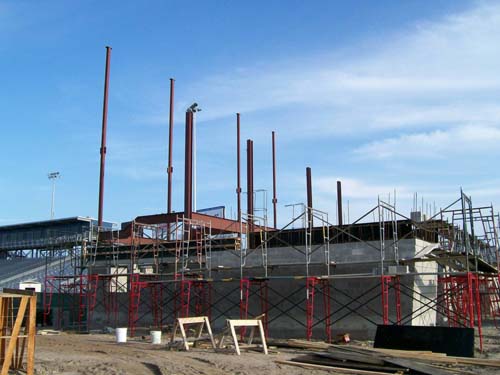 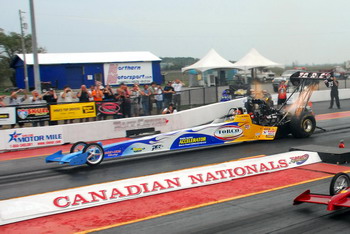 If there was a defining
moment in Floyd Cheek’s decade-long career in IHRA Pro Stock competition, it
certainly came in 1991. The milestone for the former IHRA sportsman champion
(1988 - 8.90 Quick Rod) was reached that year at ,
during one of his first events as a competitor in the mountain motor division.
He and fledgling team owner Alvin Whaley not only qualified No. 1, but also
reached the final round before losing to the iconic Rickie Smith.

“That’s when I really
realized that we could kick some serious butt doing this,” Cheek said. “I shook
the tires on that run, but it really woke me up to doing this.”

Cheek quickly climbed the
ladder of success and in his career reached 16 final rounds with eight national
event victories. He won two of those events in 1997 when he won the world
championship. 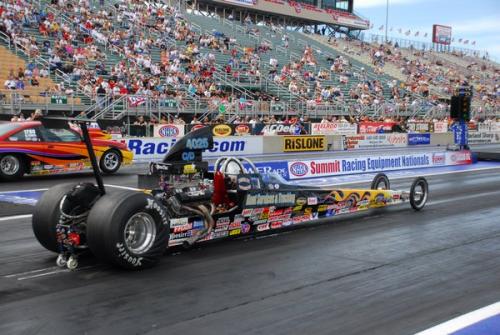 Joey Tanskley, of Greenwell Springs, La., currently
leads the division with 303 points with his C/Dragster, but is followed closely
by the defending Division 4 Champ, Craig Bourgeois, who trails by a mere 11
points in his A/Nostalgia Dragster.  The Championship chase isn't limited to the
top two, however.  Charlie Watson, Jr., currently third, trails Tanksley by only
two rounds (31 points) with his potent Super Mod Cobalt.  Young Chase Williams,
currently fifth, is within striking distance of the leaders, 76 points back with
three events left to claim in his Super Mod Grand Am.  The wild card in this
points race is Scott Benham, who currently sits sixth with 210 points, but has
only been to three races in his Super Mod Cavalier.
Championship scenarios are wide open at this
point.  Racers in Comp Eliminator can claim their best five out of the first
eight division races they attend towards the Division Championship.  Tanksley,
Bourgeois and Watson all have been to six events, leaving two more events to
claim for them.  Williams has been to five, leaving three more events for him to
claim.  With only three races under his belt, Benham will be able to earn 'full'
points at his next two events rather than replacing events like his competitors,
which clearly makes him the spoiler in the field.

Kenny
Bernstein is arguably among the most important competitors on the NHRA
POWERade Series circuit.  As the president of Pro he wields
considerable influence with both his fellow racers and the NHRA, and
his two decades-plus relationship with Budweiser cant be ignored.  Last
year, for example, Bernstein was brought into the initial discussions
about the Countdown program with the NHRA hierarchy, although he was
sworn to secrecy.  When his fellow racers found out he’d been involved
in the discussions fro the very beginning, they weren’t happy until
they realized that it was better to have had at least one racer’s voice
o the panel than to have none at all.  But, that’s not to say that he’s
totally pleased with the way the Countdown program has been structured
thus far.

Fri, 2007-09-07 08:25
Ashley Force, the 24-year-old driver of the Castrol GTX Ford Mustang Funny Car
and recent winner of AOL Sports’ “Hottest Athlete” poll, will guest Monday
night, Sept. 10, on The Tonight Show with Jay Leno.  The NBC-TV show airs in
every major market following the late local news.
Coming off a solid performance in last week’s Mac Tools U.S. Nationals at
Indianapolis, Ind., a race in which she qualified No. 2 and, on race day, posted
the quickest quarter mile time in the category (4.784), Ms. Force has
distinguished herself this season as the first woman to compete in the Funny Car
class since 2000.
Her No. 2 start at Indy was the best ever for a woman Funny Car driver and
she already has won more rounds (10) than any of the nine other women licensed
in the class.  She also has become only the second woman to advance as far as
the Funny Car semifinals, doing so in back-to-back races at Atlanta, Ga., and
Madison, Ill.
Although she has established her credentials as a candidate for the
Automobile Club of Southern California’s Road to the Future Award as the NHRA
Rookie-of-the-Year, Ashley has gone through a baptism of fire – literally and
figuratively. 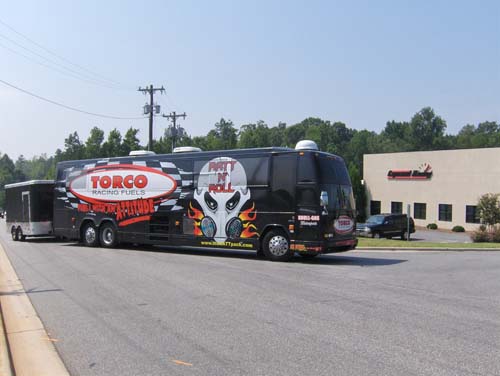