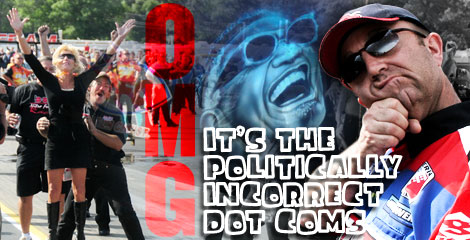 In addition to the annual 100-percent reader voted Dot Com Awards, the staff of CompetitionPlus.com produces a not so politically correct Dot Com Award section. Over the course of a year we see stuff and while we report factually and unbiased what we see, there are a few things where we have tongue in cheek opinions that we don’t express at the time.

Well … that time is now.

Read at your own risk.

He didn't come out on top in the inaugural NHRA Get Screened America Pro Mod Challenge world championship title chase, but 33-year-old Brad Personett was a 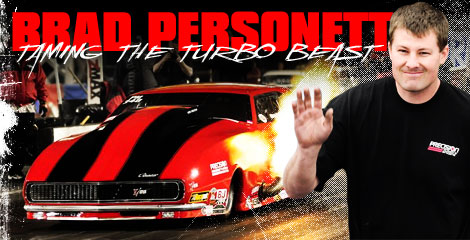 standout in the series nonetheless.

Driving the turbo-powered Big Stuff Precision Turbo '68 Camaro for Personett Performance, the former Sport Compact ace scored two victories – the first at the prestigious Mac Tools U.S. Nationals in Indianapolis, where he also reset the national record for speed to a breathtaking 255.39 mph, and the second at the season-closer at The Strip at Las Vegas Motor Speedway, where he stopped No. 1 qualifier Melanie Troxel in the final.

"Winning Indy was great, of course," said Personett, for whom the victory was a career first in the series sweetened by the fact that it came at his home track in front of a multitude of family and friends.

"Winning the Vegas race capped everything off at the end of the year, though," he continued. "We fine-tuned and tweaked the combination, got to the point where we had some spare parts, and I got my feet back underneath me after playing catch-up all year long. In Vegas, things finally started clicking."

FEDDERLY PREFERS THE SHADOWS OF THE SPOTLIGHT 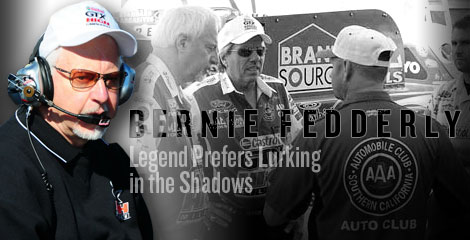 He’s a part of the so-called John Force brain-trust. The one member, he says, who is the quiet guy sitting in the corner who offers his input from time to time.

That’s the world as Bernie Fedderly sees it. Brought in as a co-crew chief, i.e. extra set of eyes for Austin Coil in 1992, Fedderly now only assists current crew chief Mike Neff after the recent departure of Austin Coil.

“I just stay in the background and throw in my comments every once in a while when I’m not sleeping,” admits Fedderly.

Whomever Force brings in to fill the Coil vacancy, Fedderly is ready to mesh with the appointee, as well as Neff. The team is expected to make the announcement once they begin testing in February.

Fedderly says from his vantage point in the shadows, the ability of the team to work as an army of one, was the strength behind the 15th John Force title. 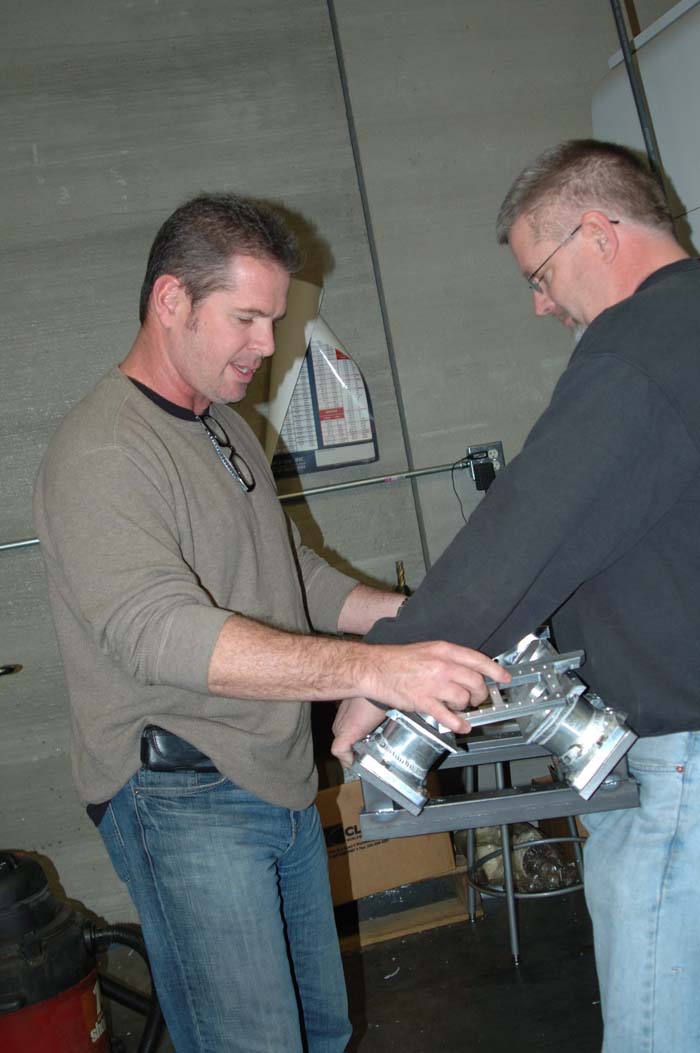 Matusek, the driving force behind the Aeromotive brand and a soon-to-be NHRA GSA Pro Mod competitor, has a passion for performance which leads to a better understanding of the bullet he has loaded between the fenders of his innovative new Mustang.

“It just goes to exhibit what we know about racing in general; about cars, about performance. We understand it,” said Matusek, speaking of the Aeromotive research’s development department. “We build it. We live it. The intake is just one part of the equation. It was something we needed for the new car. We looked at having it done on the outside, but the amount of time it would take, and resources and we thought, you know what we can make one of these. We have engineers and machines and programmers and let's just make one and see how it works. So, that is what we are doing.” 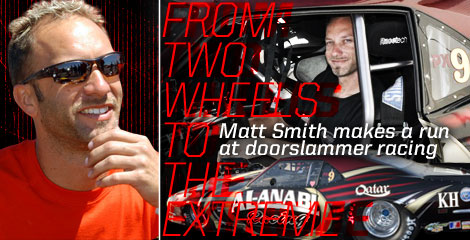 Racing League series. He headed home to North Carolina a month later with a freshly minted Pro Modified license in his pocket and an entirely new career path laid out before him.

The dramatic and unexpected turn from Pro Extreme Motorcycle to the ADRL’s premier four-wheeled class came for Smith after Al-Anabi’s Sheikh Khalid Al-Thani opted out of driving his Frank Manzo-tuned ’68 Camaro after just the first of eight scheduled races. Despite rampant rumors swirling about the Sheikh’s sudden departure from the driver’s seat of last year’s championship-winning ride, Smith says the decision resulted from several definable factors.

“I’m not speaking for him so don’t hold me to it, but it’s a lot of different things,” Smith suggests. “He’s got his country to run over there, he’s the head of security in Qatar, he’s got other businesses over there that he’s got to run; plus his back was hurting from driving.

MCCANDLESS REUNITES WITH “BEST EVER” CAR

Herb McCandless had to see it for himself. 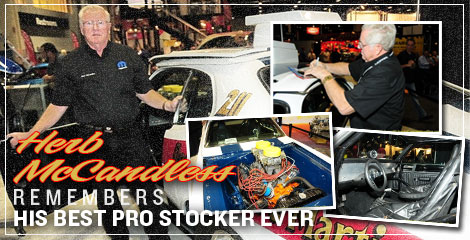 The Pro Stock legend, known for his prowess shifting a four-speed transmission, received a call approximately two years ago informing him his renowned 1972 Dodge Demon had been located in Buffalo, NY, sitting in a basement.

McCandless was the only one who could say for sure if the classic Mopar was authentic.

“Once I looked at it I immediately knew that it was the right car because I did a lot of things to this car that only me and Gale Mortimer knew about,” McCandless admitted. “The car was found there and Todd Warner (St. Petersburg, Fla.) bought the car and sent it to Eric Linburg over in Minnesota [for restoration].”

There would be nothing like the perfect race final to cap off this evening-all live on the giant rock and roll station WKJR. Compare this scene to a handful of 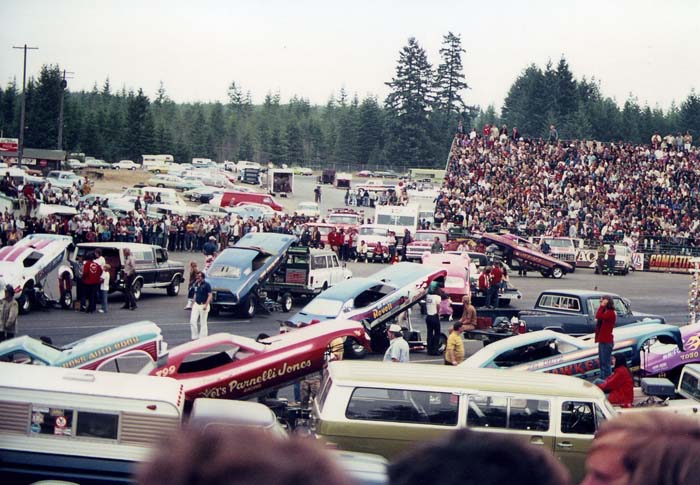 hydros sputtering around Lake Washington the next day….no contest, folks!!

To set the scene Bill Doner had “worked” the huge Seattle audience into a near frenzy with his hyped announcing efforts. As the two racers rolled forward in the staging lanes everyone stood up in anticipation of a great final. As late as it was on that Saturday night not a soul had left … or even considered leaving until the answer was clear. They had watched the team of Whipple & McCulloch for years at SIR and tonight they both were going nose to nose, so to speak … no blinking anywhere.

The motors for this final affair were lit simultaneously leading to lengthy burnouts, side-by-side nearly to the eighth mile mark. The fans were all standing, barely enduring the tension in the air as the two “floppers” pulled closer to the starting line.

SNAKE NOT 'OVER' DRAG RACING BUT FOCUSED ON OPEN WHEEL 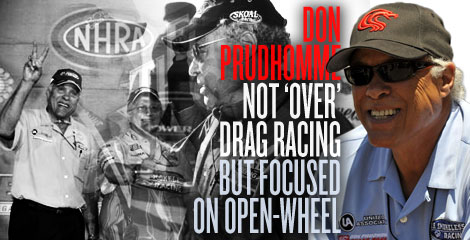 It has bothered him, this perception.

It has haunted NHRA icon Don Prudhomme ever since he retired from drag racing at the end of the 2009 season.

He helped shape the sport, from drag racing's infancy in Southern California's San Fernando Valley through a career as a multi-time champion driver and owner. So his flippant remark that he's "over drag racing" has haunted him.

And as he joined close friend Chip Ganassi in Indianapolis for the team owner's announcement this week of a new two-car Indy Racing League operation, Prudhomme wanted to set the record straight.

"I'm so glad to get the chance to clear things up," Prudhomme said. "I wasn't misquoted when somebody wrote that. I said it, but I'm not a master of the English language. I'm guilty of saying things I wish I hadn't.

THE LEGEND OF LARRY SUTTON 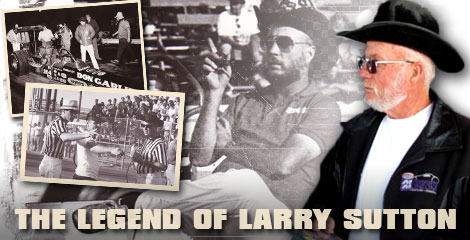 the undisputed boss on the starting line, fair-minded but tough as he presided over Southern California tracks in drag racing's golden era.

It wasn't just that Sutton had the best seat in the house as racing history unfolded before him; he was a part of it, too, driving almost continuously from his teens to age 52. "I loved driving, and I loved being on the starting line," he says, "and it truly was the best of both worlds."

Sutton rode his bike to Lions to hand out time slips when he was 13, became the starter at 16, and prowled the line until the day the track was shut down. When Lions' gates closed forever in late 1972, Sutton shifted to Irwindale and Orange County, working wherever the bigger race was, and eventually he was flipping the switch at Seattle, Fremont, and all the big West Coast tracks.

AN INTERVIEW WITH LARRY MORGAN 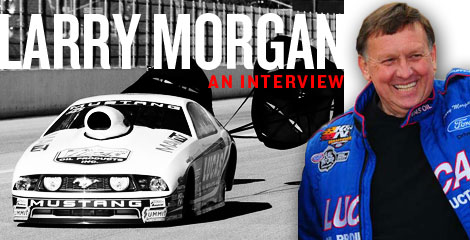