Banned from the park he helped shaped into a
versatile racing facility and removed as its general manager after a sordid
three-year legal fight, a bitter and beaten Orville Moe reluctantly must look
ahead.

SO-CAL STRIPS: Where did they go?

Once the Promised Land for drag racing, Southern California is nearly
a ghost town

It was the era of Jan and Dean, the Beach Boys,
Mel's Drive-Ins and Hot Rods.

Over the next few months I’ll present a history of
the Northwind Top Fuel dragster of the 60s and a progress report as the
rebuilding of the car continues for a Pomona debut in November.

I had followed drag racing since I was in the eighth grade and by the time I
was 22 in 1965, I found myself heavily involved. Most of my learning experiences
were crafted through trips to places like Aurora and Scappoose, Oregon, as well
as Shelton in Washington state. Back then, I had hitch-hiked or bummed rides in
order to get to the races. I wanted to learn more.

Most of my time was spent photographing every car that traveled down the drag
strip with my Brownie camera. I spent many an hour standing in the grass
alongside the track. My insatiable desire for cars, and especially drag racing,
grew until I was able to get in close contact with the sport through a neighbor
of mine in North Portland.

Be careful what you wish for. It just might come
true.

It has for J.R. Todd, and the NHRA POWERade Series rookie is loving
it.

Todd is enjoying a quick rise to NHRA stardom this season. He just
wrapped up a successful Western Swing by winning two of the past three events -
both times against Top Fuel stalwart Tony Schumacher - and is the obvious
favorite for the Auto Club of Southern California Road to the Future Award,
which is annually presented to the NHRA Rookie of the Year.

He's living
out his dream.

This season Castellana has found the going a little tougher as he had not
visited the Winner’s Circle before the 25 th Annual Torco Racing Fuels Northern
Nationals at US 131 Motorsports Park. Things all came together for Castellana
during the Torco Pro Modified Shootout, however, as the Westbury, N.Y. resident
topped Quain Stott in the final to collect the $20,000 winner’s check. It was
the first significant victory for Castellana this season and, he hopes, a
springboard toward better things the rest of the season. His 6.141 at 232.31 mph
put him in front as Stott posted a 6.161/232.96.

“This feels great,” Castellana said. “We’ve kind of struggled this year and
it has nothing to do with nitrous cars or blower cars, we just kind of struggled
to find our combination that we had last year. Things really came together at
the right time this weekend. We’re thrilled with this. We needed a little shot
in the arm to get things going, now we feel like we have things headed in the
right direction. Hopefully we can keep it going.”

Castellana, one of two nitrous-powered cars in the field, went from the #3
seed to the championship. In the first round he squared off with the ’53
Corvette of Rick Distefano. He took advantage of lane choice against the
seventh-seeded Distefano, posting a 6.177 pass at 231.12 mph to top Distefano’s
tire-shaking pass.

Of the nearly 6000 powerplants prepared by Ed Pink since 1948, we figured
his most memorable to be some form of the nitro-burning Chrysler Hemi that
propelled him to international attention in the Sixties and Seventies.  Instead,
it’s a tiny German gas-burner from the Eighties, as Pink explains here ...

“Every business has its
peaks and valleys.  Mine started to go into a valley in the mid-Eighties, and we
had a pretty-good-sized nut to crack.  So we got involved in sports-car racing,
around 1987.  My old friend and drag-race customer, Jim Busby, had started
running a 962 Porsche in GTP, the ultimate IMSA prototype class.  One day he
called me up and asked, ‘Why don’t you do Porsches?’

“I said, Jim, we’ve never done a Porsche before; I don’t even know what the
inside of one of those things looks like.  He says, ‘An engine’s an engine.
You can do it!  I’ve got strong connections with Porsche.  How about if I get
you to Germany, to their R&D center?’   I said, Well, that would sure
help.  So, he got me hooked up with them, and I spent two weeks in the engine
department.  That was quite an experience.

Capps piloted his Funny Car to a 4.846 second run at 317.87 mph. The
current POWERade points leader in Funny Car, Capps has been excited to
see what his team can do during these testing days in Indy.

“Testing was awesome,” Capps said. “You know these conditions are those that we could see on Sunday for the Skoal Showdown.”

Capps is one of eight drivers competing in the $100,000 Skoal Showdown
at O’Reilly Raceway Park during the Mac Tools U.S. Nationals Aug.
31-Sept. 3. The Skoal Showdown is a high-stake, high-speed race
featuring the eight quickest and most consistent Funny Car teams from
the last season. Capps will face Don Schumacher Racing teammate Gary
Scelzi in the first round of the event.

But Capps says that the biggest excitement surrounding this year’s U.S.
Nationals is the addition of the Countdown to the Championship. 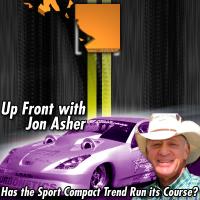 The SEMA International Auto Salon has proven
to be a pretty accurate barometer of where the industry niche, Sport Compact
racing, is going, and it appears that if it’s going anywhere, it’s away from
drag racing.


This once-important industry mini-convention came to life three years ago
with an impressive showing at the Los Angeles Convention Center.  The following
year it moved cross country to smaller digs in Atlantic City.  This year it
moved to the Fort Washington Expo Center, a warehouse-like venue 30 minutes
outside of Philadelphia. 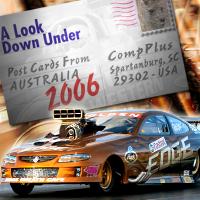 It was hard to believe that over a year had passed
since my first visit to New Zealand and Australia. It was in May of 2005, to be
exact, that I joined American doorslammer pioneer Camp Stanley and New Zealand’s
Top Doorslammer champion Dave Green on a trip to Western Sydney International
Dragway for the Nitro Champs event. We had a great time, and long before we
boarded a plane for home I knew I wanted to experience the sights and sounds of
drag racing “down under” again.

Fortunately, in addition to being a veteran of supercharged door car racing,
Camp is also a seasoned long-distance air traveler. He makes the trip to New
Zealand and/or Australia three to four times a year. On many of these trips he
joins Dave’s crew at New Zealand Drag Racing Association (NZDRA) events and
serves as tuner for their blown Corvette. Thanks to his expertise it was a
relatively simple matter to make arrangements for the 2006 version of our
journey to the Southern Hemisphere. This time around we were heading to the
biggest race on the Australian National Drag Racing Association (ANDRA)
calendar, the Castrol Edge Winternationals at Queensland’s venerable Willowbank
Raceway.