Three of drag racing’s well-known nitro tuners are writing a new chapter in their racing career.

The tuning duo of Tim and Kim Richards along with Rob Flynn have found the most unlikeliest of homes – tuning 2500 horsepower, suspended chassis race cars within the ADRL’s Pro Extreme division.

“I think this is where the future is,” said Alex Hossler, one of the ADRL’s leading Pro Extreme racers. “I think a lot of people see that and they want to jump on the bandwagon. Not knocking NHRA, but who knows where NHRA is going to be five years from now. Who knows where ADRL is going to be five years from now? This is the fastest growing motorsport that I know of and I think these guys all want to be a part of it.”

Hossler recently added Flynn as his tuner following the lead of the Al Anabi Racing team of Sheikh K.H. Al Thani who hired the Richards to cover for Frank Manzo, on the weekends when he races in the NHRA’s Top Alcohol Funny Car division. 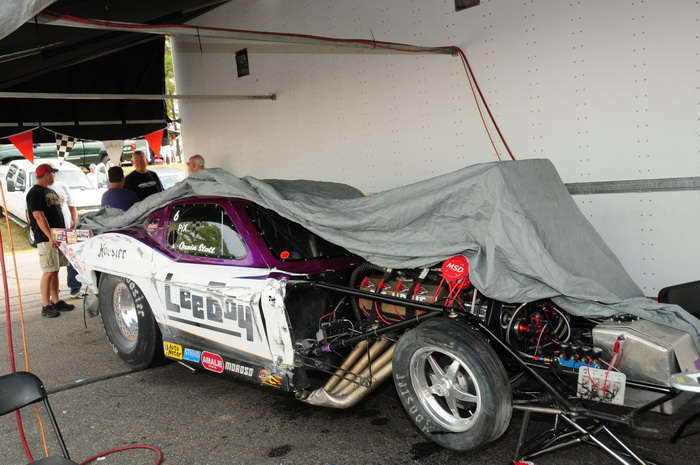 Quain Stott will attest drag racers are creatures of habit.

On Friday, during the ADRL Dragstock VII event in Rockingham, NC, the Pro Modified champion now racing in the Pro Extreme division learned how hard those old habits are to break.

Stott had a run in with Rockingham Dragway’s right retaining wall and wrecked his LeeBoy-sponsored 1963 Corvette, taking him out of competition for the remainder of the event.

“It was just driver error,” Stott admitted. “I got on the brakes too hard. Still trying to learn how to drive this converter car. For 35 years, I’ve been driving a clutch car. I went through the finish line and the only thing I can figure is out of habit I pushed in what I thought was the clutch and it was the brake. Then it locked up the brakes and put it into the wall.”

This is a story unlike any other you may have read about Ed “The Ace” McCulloch.  It is the last time we’ll ever reference McCulloch’s early days in the sport, when his physicality wrote the headlines, not his exceptional driving skills.  He is so far removed from that younger, wilder McCulloch as to be a completely different individual in 2010 than he was during that long-gone era.  As McCulloch himself says, “When the guys working on the car (the Ron Capps-driven NAPA Auto Parts Dodge) hear those stories about me they don’t believe ‘em.  They say they can’t be true because I’m not like that.”  If they only knew, really knew.  But we’re finished making those references, for this is indeed, a markedly different McCulloch.

As a driver few could match McCulloch’s intensity and desire.  As a crew chief he’s retained those same traits.  It’s just far less openly evident as were his emotions some years ago.  When the race car doesn’t do what he expects it to there’s no head-shaking, no wrench-throwing, no shouting.  There’s only the vision of McCulloch turning to head back to the rig with his head down, determined to figure out what happened and why, and to fix it.

Team owners are under a lot of pressure these days, whether they show it or not.  Obtaining a sponsor is far more difficult in 2010 than it was even in 2005 – and it’s likely to get more difficult in the months ahead.  Knowing this, team owners show far less patience with a recalcitrant race car today than they did yesterday.  They ask more questions and make more demands on their employees than they ever have in the past, sometimes with good cause.  It’s a cold, cruel world out there, and they know it.  And they also know that one of the two conversations they never want to have with their sponsor begins with, “How come the car’s not running better?  We’re getting killed out there by our biggest business rival!”  The second conversation – far worse – begins with something like, “We’re sorry, but we’ve decided to go in a different direction.  We won’t be renewing our deal with you for next year.”

Veteran drag racer Johnny Gray often prefaces his statements with the reminder: "I've been doing this for 38 years or so . . . " 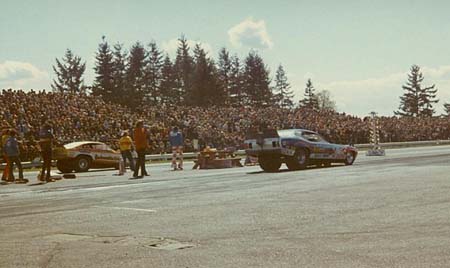 Nearly 40 years ago America was going through the first of two major gasoline crises. The country was still trying to extricate itself from Vietnam and drag racing, like other forms of American motorsports was still in the toddler stage.

Drag strips were struggling to keep fans in the stands and something called the “funny car” was still in its infancy. But, it was 64 of those “funny cars” which would rescue tracks like Pacific Raceways.

INJURED NMCA RACER: “IT ALL HAPPENED SO FAST” 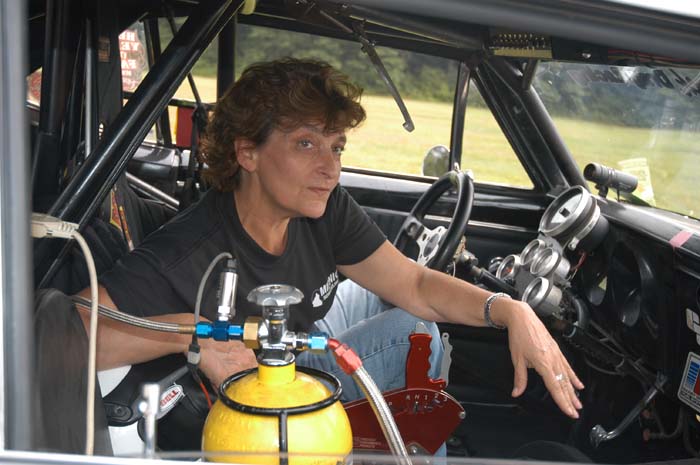 It happened in the blink of an eye; at least that’s how Barbara Nesbitt remembers it.

“I reached up to pull the parachute handle and thought the nitrous bottle exploded,” Nesbitt recalled in an exclusive telephone interview Thursday afternoon.

This was Nesbitt’s first interview, just eleven days after a top-end drivetrain failure nearly took her right arm, broke a finger on her left hand, and bruised her liver and a lung, and at least three ribs while racing her Camaro at zMAX Dragway in Concord, North Carolina in the NMCA’s ARP Nostalgia Pro Street class.  The car, which only had ten passes on it since its construction, had already been clocked running in the mid-7’s at over 180 MPH.

Nesbitt still isn’t sure of the exact sequence of events.

NMCA RACER TO LEADERS: NO WHEELIE BAR RULE IS UNSAFE 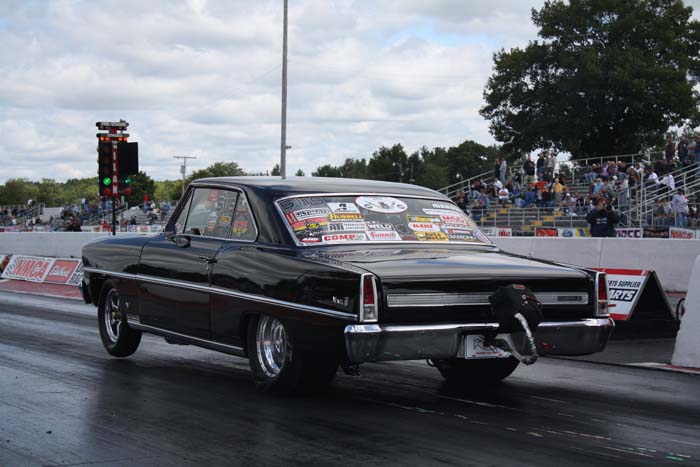 stock-type chassis and 10.5-inch wide tires. Entries are permitted small block and big block engines up to and including a maximum of 565 cubic inches (depending on combination).

LARRY MORGAN: SOMEHOW WE ARE SURVIVING 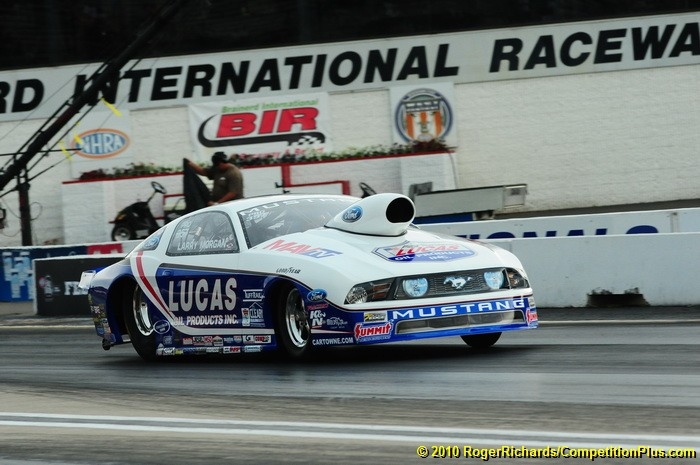 Larry Morgan admits he’s survived some tough seasons in his storied career but 2010 has been in a league of its own. He’s blown up enough engines and broken enough parts to leave the legendary Henry Ford shaking his head in disbelief.

He knew the year was going to be one of transition with a change of manufacturer and a new engine program. However, Morgan never envisioned the carnage would reach the level where he would be left to wonder if he’d survive financially.

“When you break seven engines and try and survive that, that’s a tough deal,” admitted a puzzled Morgan. “I am lucky to even still be here. I’m not sure how I am still here, but I am. We’re here. We’re struggling along and I’m fine with that. I could be home doing something I don’t want to do.

A MAN AND HIS LOVE FOR AN “OLD SCHOOL” BUS 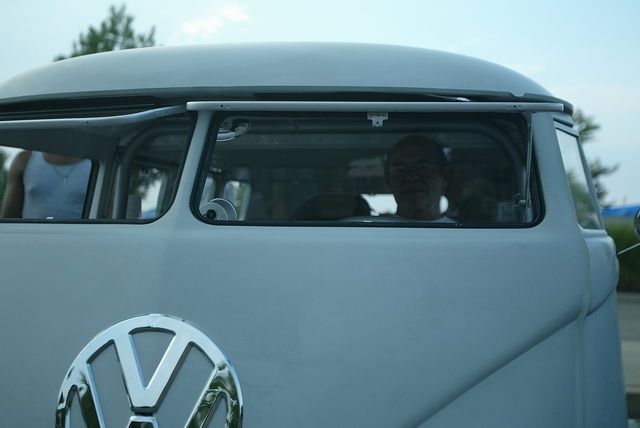