Two seasons ago Antron Brown experienced what could be described as one of his highest of highs as a drag racer.

The former Pro Stock Bike rider drove his way to a clean sweep of the NHRA’s famed Western Swing in just his second season as a driver.

On February 21, 2010, the usually upbeat Brown experienced his lowest of lows.

Brown’s dragster lost a tire and crashed into the wall during the NHRA Full Throttle Series event in Phoenix, Ariz. He was uninjured but the errant tire hurtled through the pits and fatally injured a first-time drag race attendee.

“The accident part didn’t hurt me,” Brown said. “I understand that we put on a show for entertainment, we’re out there racing, and we always have our mindset focused on winning. Never once do you think about endangering somebody’s life in the stands.”

Brown has talked little in the media about the days following the accident -- days, he believes, were the darkest he’s faced in his life. Major League drag racing in Australia has reached a critical crossroad. At issue is which direction Down Under drag racing goes. Should the sport continue as it is, a mutiny of epic proportions from within the ranks of the professional, or Group 1, racers has the potential of tearing organized competition apart.

By following the racers a precedent could be set which essentially devalues the image of the Australian National Drag Racing Association (ANDRA) as a sanctioning organization. Going in a different direction could empower the sanctioning body, with all parties placing the future of their sport in the hands of a management group whose own members admit they’re incapable of handling all aspects of the sport, from rules enforcement to marketing. Larsen has always considered himself a happy person. He lives a different kind of happy at 64 years old. His elation comes in reaching a milestone of two decades of being drug free and sober. The vices which once consumed his life are now as distant as one end of the universe from the other.

Larsen’s personal demons of addictions and substance abuse were byproducts of the 1970s drag racing lifestyle where nitro racers and their crews were considered in many circles as one notch lower than rock stars.

“I’ve done this sport for about 40 years and I’m a child of the 1960s from southern California,” said Larsen. “I grew up with some of the problems of abuse. I grew up with both parents as alcoholics. I drank some and smoked some pot. I did other things I’m not proud of. My misspent youth went into my 40s.” Come September there will be, not one but two, DeJoria's anxiously awaiting the start of Funny Car qualifying.

Alexa Dejoria, the driver of Patron Funny Car, and her father Paul have both marked Spetember 23rd as a very important day in their journey as a father and daughter.

“I’m very excited about it,” said DeJoria, the excitement coming through in her voice.

For DeJoria the first day of qualifying at the NHRA AAA Texas Fallnationals will represent a rite of passage. She will officially be a full-fledged nitro racer. And, even though her father was steadfastly against her driving in the NHRA, over time his attitude has changed. He has since warmed up to the idea to the point he’s eagerly looking forward to each race and to the day she takes the next step in her racing career.

The current task at hand for Alexa is becoming more acquainted with the Funny Car which burns a potent blend of nitro versus her Top Alcohol Funny Car.

PENSKE WAS ONCE A DRAG RACER

The winningest team owner in Indianapolis 500 history started out as a winning drag racer. That little-known fact about Roger Penske was revealed in an exclusive interview the 15-time Indy 500 winner did with CompetitionPlus.com. The 100th anniversary running of the “Greatest Spectacle in Racing” is this Sunday at the Indianapolis Motor Speedway.

“As a kid, in the 1950s, I used to go to the Akron (Ohio) drag strip and take my dad’s Buick Century there,” remembered Penske. Enough to bring an NHRA legend close to tears.

In 1992, Kenny Bernstein owned the Quaker State Lola-Buick Roberto Guerrero qualified on the pole with a four-lap, 10-mile average speed of 232.482 mph, then an Indianapolis Motor Speedway track record. Indy 500 qualifying is this weekend and the 100th anniversary of the first "Greatest Spectacle in Racing" is scheduled for Sunday, May 29.

Even though Bernstein is a six-time champion, winner of 69 national events, and No. 6 on NHRA's 50 greatest drivers list, he rates the accomplishment VERY high on his personal list.

GETTING TO KNOW PAUL PAGE

I met Paul Page for the first time in the late 1970s at the old Trenton Speedway in New Jersey. We got to talking while waiting for the crossover gate to open at a USAC Championship Trail race. A couple of years later, when I became CART’s communications director, we started working closely together and developed a long-term friendship. Page began at WIBC Radio in Indianapolis in 1968. In 1977, while on assignment, he was almost killed in a helicopter crash near the Indianapolis Motor Speedway. That same year he took over as anchor of the worldwide Indy 500 Radio Network on short notice when the legendary Sid Collins died in May; in fact, he was Sid's hand-picked successor. Paul was the race's "voice" for 15 years and also called the action on NBC's early CART telecasts.

Shawn Cowie, who was critically injured April 9 when his motorcycle was rear-ended by a car on Interstate 40 in Nashville, Tenn., is expected to be transferred 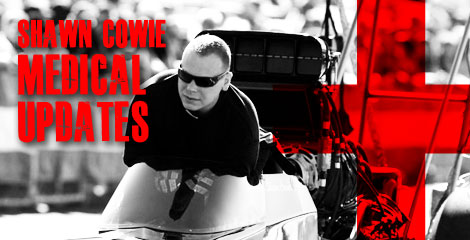 from Vanderbilt University Medical Center in to an as yet determined hospital in Delta, British Columbia, a suburb of Vancouver.

Cowie will be transported to Delta via an emergency medical plane.

“They are basically just waiting for a bed in Canada now and once a bed is assigned to him up there they will fly him out,” said Ron Cowie, Shawn’s father, while speaking with a writer from CompetitionPlus.com Thursday from Vanderbilt University Medical Center. “He will go to an area hospital there (in Delta). There are no more surgeries scheduled, but they (doctors) will have to deal with the pins in his pelvic area and the pins in his foot/ankle area in the next number of weeks. I call him stable, but they want him to be in a critical care area because of the injuries. There is nothing life-threatening at this point. They just want to monitor things very closely.”

The Summitracing.com Nationals turned out to be one of the better races we’ve seen in Nevada – and that covers more ground than you know.  While we didn’t get the 20-degree drop in temperature many were expecting, it cooled off just enough, and the air got just enough better, so that the racing was very good. There was far less tire smoke than was expected, and the number of good, solid side-by-side runs was excellent.  It’s just too bad that so few people turned out to see it in person.

We didn’t reference the spectator turnout prior to Sunday because it was so disappointing. Even track personnel expected a better turnout today, but it didn’t happen. There is a significant difference between the spring and fall races at Las Vegas Motor Speedway, with the second event far out-performing this one. A statewide holiday on Friday of the fall race certainly helps, but when you have excellent weather as we had on Sunday, well, it’s just a shame more folks didn’t show up.

Way back in 1984 Mark Oswald won both the NHRA and IHRA championships in Funny Car. He was also a standout Top Fuel driver in the Thomas, Oswald & Kattleman machine. Now he’s a superior tuner with partner Brian Corradi. While Antron Brown was the Top Fuel winner, it was Oswald and Corradi who made it happen.

Drag racing has a rich history of vintage cars. Unfortunately, memories of most of those dragsters and Funny Cars are relegated to photographs, home movies and old TV footage.

That’s not the case for the Jim Kirby/Dick Harrell 1968 Camaro AA/Funny Car. This car, which was last raced in 1972, is still available for the racing world to see in its original glory. The car is now owned by Bill Porterfield.

“I was match racing the Gibb/Harrell ZL-1 in 1990 and heard about this Kirby car,” Porterfield said. “I talked to Jim (Kirby) a couple of times and he gave me a price, but I could not handle it. Matt Murphy acquired the car in 2003. He restored the chassis, but left the original paint and I bought it from him in 2009.”