ALAN JOHNSON AND WHAT COULD HAVE BEEN 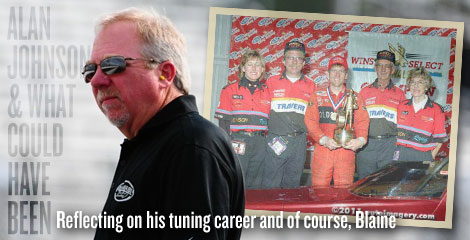 Alan Johnson may have a way to go to pass Austin Coil as the most prolific fuel tuner in drag racing history, but is there any doubt that he'll end up on top in the end? Johnson, who won three Top Fuel championships (1997, 1998, and 2000) with driver Gary Scelzi and the Winston team a decade ago, another five with Tony Schumacher's Army dragsters in the 2000s (2004-08), and his first of who knows how many with Larry Dixon and the Al-Anabi team last year, is still in his early 50s.

And just how many Top Fuel championships would Johnson's late brother Blaine have by now if his life hadn't been cut short by a crash during qualifying for the 1996 U.S. Nationals? No one questions whether Blaine, then in just his third year in Top Fuel, would have won that 1996 title. Even Kenny Bernstein, who won a tainted title that year said so, graciously handing the championship trophy to the Johnson family during the awards ceremony in perhaps the classiest move of his long career. "I know this will have an asterisk next to it," Bernstein said at the time. "It will always be there."

"I think Blaine definitely would have a lot of Top Fuel championships by now," Johnson has said of his younger brother, who set the Indianapolis Raceway Park track record (4.61) on that fateful run. "I've had a lot of great drivers over the years, and I mean great drivers, but to me, Blaine is the best of them all."

HIGHT SEEKS TO PIECE TOGETHER THE PERFECT SEASON

As the newly appointed President of John Force Racing, Robert Hight knows a thing or two about the computer process of cut and paste. Now, if he could just 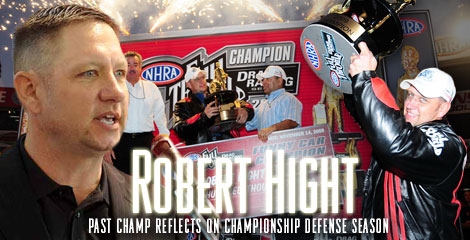 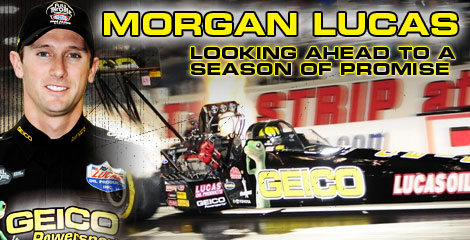 Halfway through the 2010 NHRA Full Throttle season one could have hardly faulted Top Fuel dragster driver Morgan Lucas if he was looking forward to the end. By the time the end arrived, Lucas wasn't nearly ready.

In a few short months, Lucas and his team were having fun again.

“I really love what I do and I wouldn’t trade anything for the world but it makes it easier to love what you do when you go to the starting line and think you’re going to win,” explained Lucas, who was one of ten NHRA Top Fuel drivers to qualify for the Countdown to 1 playoffs.

“At Pomona I really felt good, especially after first round. We made that great run on Saturday night and we go in the first round and I felt like we made a really good run then too. It just gave us so much more to go into the winter based on. It’s like now seeing all the little things that are going on around here and the stuff that’s being approached in a common sense light. It makes me look for the long term in this whole deal.” 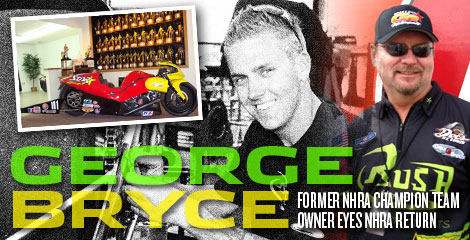 When team owner George Bryce left NHRA’s Pro Stock Motorcycle ranks following the 2008 season, it was on his own terms.

Now, Bryce, a six-time world champion owner, is ready to get back in the class in 2011.

“Last weekend, the activity to buzz again, and the juices started flowing again (about getting back into racing),” the 56-year-old Bryce said. “We never quit doing research and development. We still do Suzuki engines for customers and the S&S Buell engines like Hector Arana runs. We have all that stuff and we a great 18-wheeler and a good team, and all we lack is a little bit of a budget to go (racing).” 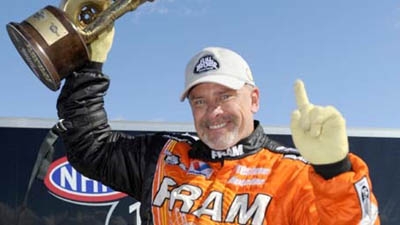 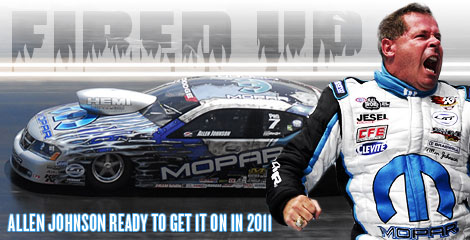 It’s interesting to note that in all the research I did to complete this story of the early 1970s, Funny Car events were very popular in all parts of the country. But 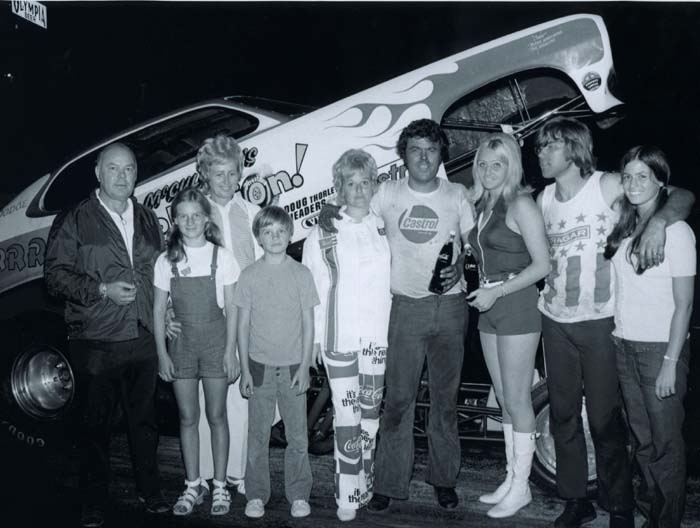 nowhere could I find where the shows were much more than match races with two, four, six, or maybe eight funny cars.  Orange County International Raceway (OCIR) had the manufacturers’ team race annually but nothing in the format, size and impact that 64 Funny Cars was about to have at SIR.

Nowhere was there going to be any event even close to the scale of the “Seattle Giant”.

The cars in these early times were able to run at events up to four times a week in the highly-populated East Coast, but SIR was the only place where this monster event was about to take place. It sure made sense to me that many of the named stars of the sport would want to be involved with the biggest Funny Car event anywhere, and of course, winning it would be one major accomplishment. 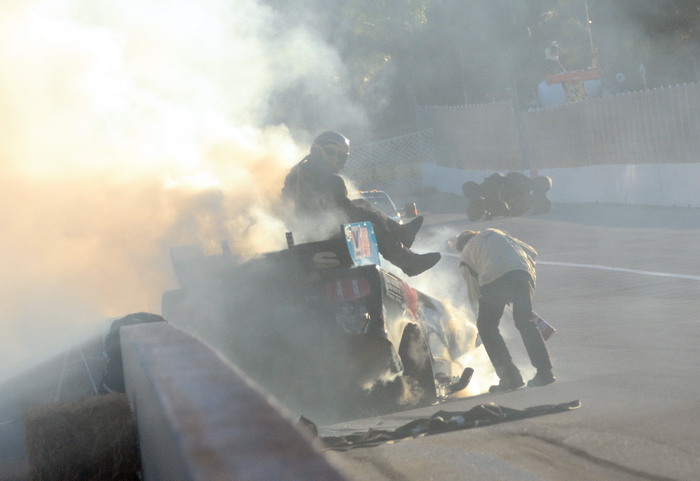 Thus, to improve the quality of their races for the fans, the sanctioning body announced Wednesday it is implementing stiffer penalties to reduce lengthy downtime because of oildowns and improve track preparation.

In 2011, when Top Fuel, Funny Car, Pro Stock and Pro Stock Motorcycle drivers oildown the track, they will be subject to fines and championship point deductions.

For its part, the NHRA is increasing its track prep and oildown clean-up capabilities by adding additional equipment to the Safety Safari, including a second drag tractor.

Lee Beard, a championship crew chief and team manager, applauded the NHRA for taking action. Beard is returning to his familiar role as a crew chief in 2011 as the wrench boss for the new Funny Car team with driver Johnny Gray at Don Schumacher Racing. Beard also will remain in his position as DSR’s team manager.

DESPITE CHANGES, TASCA FORGES AHEAD IN 2011

Usually when an NHRA Top Fuel Funny Car team completely changes its engine program during a season, success is hard to achieve.

Driver Bob Tasca III and his Motorcaft/Quick Lane Ford team, however, didn’t let the overhaul sabotage their 2010 campaign. Tasca finished a career-best fifth in the season points chase, highlighted by his win at the NHRA Supernationals in Englishtown, N.J., in June.

“2010 was a roller-coaster for us in a lot of ways,” Tasca said. “We worked all winter of 2009 with a certain setup. Then, we worked real hard with that setup through testing and we opened up the 2010 season with that setup. Then, we made that big announcement (in March) with the ‘One Ford’ approach. We switched over to the Boss (500) engine platform. That was a pretty massive undertaking. You start a season out and I think we were four or five races into the (2010) season and we had done all this testing and when we ended the season, not a bolt was the same on the car as it was going into the season.”

The ‘One Ford’ approach focuses on all Ford sponsored teams having the  same availability to the Ford engineered technology and equipment, which will in turn make all Ford Mustang Funny Car teams more competitive.

AND THE WINNERS ARE ... THE 12TH ANNUAL DOT COM AWARDS 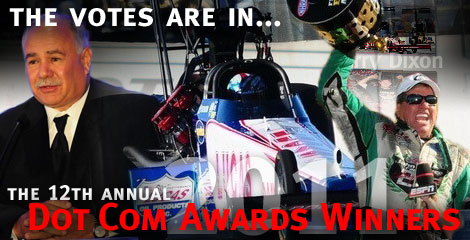