Organizers of the JEGS ProMod Challenge have announced the first list of
invitees for the series-opening 39th annual ACDelco NHRA Gatornationals, the
series-opening race that runs from March 13-16 at Gainesville Raceway in central
Florida. In all, 24 racers have been invited to compete.

"It is our hope
that every race on the 2008 JEGS ProMod Challenge will exhibit the very best the
Pro Modified class has to offer," series promoter Troy Coughlin said. "We strive
to invite the drivers that best represent this style of racing, including all
six former series champions, racers with winning records at previous races held
during NHRA national events, and solid representatives of each style of racing
we allow -- including supercharged, nitrous oxide, and turbocharged-powered
entries.

"We'd love to open the doors to everyone but we must remember
that we are invited guests of the NHRA and as such we need to follow the
guidelines of our agreement with the organization. It's a privilege to race on
their stage. As such, our competition committee spent several hours putting our
first list of invitees together."

Troy Buff is learning what each driver who preceded him in driving for
veteran team owner and piston manufacturer Bill Miller found out. He’s
learned that Miller is tough, but fair. The former Top Alcohol Dragster
standout quickly points out the most crucial lesson he learned is that
Miller is an excellent teacher.

Buff joined Miller’s BME-sponsored team in late 2007 as Alan Bradshaw
resigned his position to accept a full-time tour driving for Dexter
Tuttle. Prior to the assignment, Buff had limited seat time behind the
wheel of the Tim and Renee Coglan Top Fuel dragster. 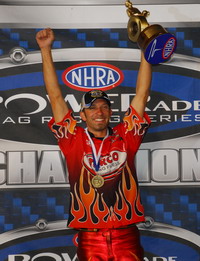 The NHRA Pro Stock Motorcycle entry list for the 9th annual CSR Eastern Spring
Test Nationals presented by Torco’s CompetitionPlus.com confirms one thing –
South Georgia Motorsports Park [SGMP] will be buzzing with the leading teams
getting in one last test session before the season begins. As many as 14 top
teams, including the NHRA POWERade Pro Stock Motorcycle champion Matt Smith,
will take advantage of nearly identical conditions to those expected the
following weekend during the NHRA ACDelco Gatornationals in Gainesville,
Florida.
Smith expects to put his NitroFish-sponsored Buell through its paces
Thursday through Saturday during this annual event which brings a national event
atmosphere to the Valdosta, Georgia community.
“We’re going to bring in the same tune-up we finished out last season,”
said Smith, who won the 2007 NHRA championship on the final run of the season.
“We have a lot of things we’ll be trying out during ESTN.”
One thing Smith finds particularly exciting is getting to perform in front
of fans when the level of pressure is not as high.

On a partly cloudy day at Firebird Raceway outside of Phoenix, Brittany
Force, the 21-year old daughter of 14-time Funny Car champion John
Force, completed a job that started over six months ago; making the
necessary passes for her A-Fuel license.

The process had its ups and downs for the Santiago Canyon College
senior including a brush with the Las Vegas Speedway guardwall as she
was learning the ropes. Her final licensing pass was a solid 5.59
seconds at 262 mph.

“Today was my first really good clean run. It was just a normal run and
it felt good. I was definitely nervous and sweating it out before I got
in the car,” said the California blond and recognized “problem child”
of the Force racing clan. “My dad is excited now to have us all
licensed. I am excited to have my A-Fuel license since now we can
continue to move forward.”

DO YOU KNOW THESE GUYS?

Probably
not, because they’re just two faceless members of the vast John Force
Racing army.  The gentlemen on the left is Troy Allen, a new recruit on
Ashley Force’s team, while on the right is Lew Arrington, who has
worked on Force’s car for the last half dozen years.

Thu, 2008-02-28 14:51
Former NHRA Top Alcohol Dragster Division 4 Champion Lee Callaway will kick off
his sophomore campaign behind the wheel of a Top Alcohol Funny Car during this
weekend's Division 4 Lucas Oil Drag Racing Series opener at No Problem Raceway
Park just outside of New Orleans.  Callaway will receive assistance from James
& Carla Thompson of Pepper Express Racing and Division 4 Hall of Famer
Jackie Stidham will return as the team's tuner.
Callaway, from Baytown, Texas, solidified himself
as a legitimate contender in the Funny Car ranks late last year with a solid
semifinal appearance at the O'Reilly Fall Nationals in Dallas.  After fighting
through ignition problems at the season closer in Noble, Okla., Callaway hopes
to return to the 5.60 (elapsed time) form he displayed in Dallas, or
better.

Thu, 2008-02-28 13:59
In its quest to present the best in Pro Modified drag racing, the Pro Modified
Racing Association Presented by Torco Racing Fuels Ontario is pleased to
announce its inaugural race at New York International Raceway Park in Leicester,
New York.
The PMRA Challenge will be held at New York International
Raceway Park Saturday, June 7.
“This is a real positive step forward,” said PMRA Director
of Operations Bruce Mehlenbacher. “We’re very pleased to be running at a new
track, and providing another quality venue for our teams to
compete.”
Opened in 1970, New York International Raceway Park is
just south of Rochester, and has been known as Motor City Raceway and Dragway
36. It is an IHRA sanctioned facility and was home to the IHRA’s Empire
Nationals in 1991.

Thu, 2008-02-28 13:47
Former NHRA Division 4 Top Alcohol Dragster Champion Spencer Massey will attempt
to regain his title with the renewed assistance of associate sponsors Rucker
Performance and Lucas Oil.  Massey has gotten off to a strong start in his brand
new Joe Monden chassis with a runner-up finish at last weekend's Division 2
event in Gainesville, Fla., and will look to follow that up with a win at this
weekend's Division 4 Lucas Oil Drag Racing Series opener at No Problem Raceway
Park just outside of New Orleans.
Massey, of Ft. Worth, Texas, is looking forward to
getting more laps on the new pipe this weekend and continuing the momentum they
started last weekend.

Coming
off their partial season in 2007, Doug Winters will hit the ground running in
2008.  His ’57 Chevy Nitro Coupe / Outlaw
Pro Mod will continue to carry the Torco banner for Mach Series Accelerator
even though he won’t be officially sponsored by Torco Race Fuels.