Many drivers will use IHRA national events scheduled on
off weeks for the NHRA tour to work out some kinks and test in a competitive
situation for NHRA competition. Terry Haddock, the Washington-based driver who
finished third in IHRA points standings last season, is taking the opposite
approach.

Founder Tom Harmsen will be
braving the winter elements, remaining OUTSIDE and SLEEPLESS for 72
hours to raise awareness for this wonderful cause.  Volunteers will be on
hand during the event to accept donations.  The goal is to bring in $125k
in donations to help disabled children and offer scholarships to those disabled
students wishing to further their education.  Donations will also be
accepted in the following cities:  .
, ,
,
CA. .  Online Donations are also
available, as well by U.S. Mail.

With March being disability
awareness month, it gives
's Dream Foundation the perfect opportunity to gain local, regional, and
national support to those children less fortunate.  's Dream Foundation seeks to
fulfill dreams of any magnitude for the youth in our midst.  This is an
opportunity for society to come together and lift up the hearts and spirits of
this youth.

Foster remains hospitalized in
recovering from heart problems he experienced on the day before Thanksgiving.
Several prominent members of the drag racing community have organized a
fund-raiser to defray the costs of Foster’s family support. They have been by
his side since he was hospitalized and with that said; the temporary lodging
and other expenses have piled up.

Boyd Coddington, the creative visionary who took hot rodding to an art form and
custom wheels to a new level dies at 63.  Coddington who was a long-time
diabetic died from complications that were brought on from a recent surgery. It
was Coddingtons' ever forward-looking view at the design and art of the hot rod
and his unconditional desire to create the finest quality cars that became the
"Boyd Look".

"It is a major loss for the automotive enthusiasts and hot
rod aficionados around the world.  Boyd Coddington did so much more than create
automotive trends, he also built the finest hot rods.  He was entertaining on
his TV Show (TLC's- American Hot Rod) and an ambassador who educated.", said
Harry Hibler, former publisher of Hot Rod Magazine.

Coddington who grew
up in Idaho was a car enthusiast from a young age.  At age 12, young Boyd traded
his prized shotgun for a Model A Ford, this began the legacy of the "Boyd
Look".  Moving to Southern California to chase his dreams of chrome and
customizing, he first worked as a shop machinist at Western Gear.  Then in the
1970's, Coddington found work as a maintenance repairman and machinist at
Disneyland.  Coddington would recount fondly his experience at Disneyland and
the companys desire for perfection, a trait that he instilled in everyone who
worked at his hot rod shops.

During the off season the Pro Top Outlaw organization
has been working hard to ensure that 2008 will be their best season yet.  Two
time series champion, Phil Esz, announced at the end of the 2007 season that he
would be stepping out of the driver’s seat and taking over the responsibilities
of running the organization.  The series, based out of Cincinnati, offers
something for everyone with an array of dragsters, funny cars, altereds and pro
mods all running heads up against one another during competition.

Over the winter, the organization is excited to announce
they have teamed up with Goodson which will be the series title sponsor.  Dave
Monyhan, national sales manger at Goodson, is coming on board as well to be the
official announcer.  And the infamous, Nitro Joe Jackson will be on hand at each
event serving as the Goodson PTO event coordinator.  In addition, the Pro Top
Outlaws will have a sponsor support trailer at each event provided by W&M
Enterprises, Inc.  The trailer will be equipped with official Pro Top Outlaw
hero cards, designed by McSnyder Designs, that you can have signed by your
favorite driver, souvenir t-shirts, literature on the series and various
sponsors, as well as other items at each event.

The Top Alcohol Funny Car Team of Nancy Matter is very proud to
announce their new multi-year associate marketing partnership with Drag
Strip Girl. The apparel and accessory company based in New Hampshire
prides itself with having the most hip, yet casual drag strip attire.
Drag Strip Girl Apparel is perfect for on and off the track, and
appeals to women as well as young girls throughout the drag racing
community.

JEGS Mail Order will bring the exciting world of ProMod drag racing to the NHRA
POWERade Drag Racing Series as an exhibition class for the eighth year in a row
in 2008 with the JEGS ProMod Challenge. Hosting 10 events this season, the JEGS
ProMod Challenge begins March 13-16 at the 39th annual ACDelco NHRA
Gatornationals in Gainesville, Fla.

"This is an exciting time for
ProMod, the drivers, their sponsors, and the multitude of fans across the
country and around the world," driver and series organizer Troy Coughlin said.
"We've seen the competition grow from a small exhibition deal in 2001 to full
16-car fields of extremely well-matched racecars in just seven years.

Matt Hartford made a name for himself racing four-cylinder, turbo doorslammers on the 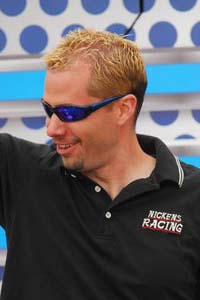 NHRA
Sport Compact series. He’s prepared to give the same effort to
establish a reputation on the big stage of 500-inch NHRA Pro Stock
racing.

Hartford is driving the David Nickens Stratus for a limited amount of races in 2008.

“I'm going to try to run Pro Stock as much as I humanly can but what that means?” Hartford said. “I don't know.”

Hartford made the Phoenix field, his second consecutive qualifying race. He’s not shy about showing his excitement, either.

”This is great,” said Hartford. “David's great to work with.  How long
this deal lasts I don't know but we're going to enjoy it while we can.
Any seat time is good seat time.  I've got Mike Sullivan up there
telling me how the world is round and if I listen to him and David then
I should be pretty good.” 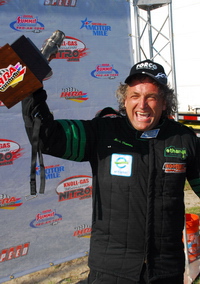 Seven-time IHRA Alcohol Funny Car World Champion Mark Thomas will have
a different look this season. The mop-topped farmer from Ohio will be
the first drag racer to drive a 2008 Impala SS body in competition.

“There is another Impala SS out there, I know there is an NHRA driver
who has one, but I don’t think he will be on the track before us,”
Thomas said. “Other than that I don’t know of anyone else who has one.
And you should see this thing…it is thoroughly wild. It looks like a
Batmobile. The wind tunnel numbers on this thing are incredible so
we’re expecting to be very fast.”

How fast? Well, Thomas has a number in mind.

David Reese is switching gears and is getting ready to run Pro Mod for
2008. See his new Mustang.