Series organizers have revised the points system to be used in the 2008 JEGS
ProMod Challenge to mirror the points system used in other professional-level
classes of NHRA competition. The new points system will begin March 13-16 with
the series-opening 39th annual ACDelco NHRA Gatornationals at Gainesville
Raceway.

The points per event will be awarded as follows: 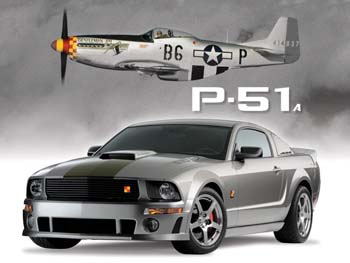 ROUSH® Performance, in partnership with the Ford Motor Company, is going to
put the very last production 2008 ROUSH P-51A™ Mustang under the gavel and
spotlights of the Barrett-Jackson Collector Car Event at West Palm Beach,
Fla. This car,
number 151 in a limited production run of 151, will be sold on
Saturday, March 29 with proceeds going to the Salute to Education
Scholarship charity.

“Number 151 is a pretty significant car for ROUSH
considering the total inventory of ROUSH P-51A Mustangs basically sold out
within 24 hours when the dealer order banks were opened up,” said Joe
Thompson, general manager of ROUSH Performance. “Whoever ends up with this
car will truly acquire a part of ROUSH history.”

Jack Roush, the
motorsports legend, NASCAR team owner, and aviation enthusiast who owns and
flies his own World War II P-51 fighter planes, will be in attendance
personally overseeing the bidding on the highest horsepower Mustang that
ROUSH Performance has every built. He is flying in from the NASCAR Sprint Cup
race at Martinsville (Va.) Speedway specifically for the auction.

Throughout its history as title sponsor of NHRA national events in Las
Vegas, NV and Gainesville, FL, automotive parts leader ACDelco has
distinguished itself by appointing dignitaries whose presence adds to
the race’s excitement.  This tradition continued today with the
announcement that legendary drag racer “Big Daddy” Don Garlits will be
the Grand Marshal of this year’s ACDelco Gatornationals, the third race
on the 2008 POWERade Drag Racing Series schedule.

“ACDelco is keenly aware of the Gatornationals’ significance in the
motorsports community, and, as its title sponsor, we feel a
responsibility to add to its legacy,” said Paul Johnson, General
Director of the Global Independent Aftermarket for ACDelco.
“Therefore, when considering candidates for Grand Marshal of this
year’s event, we looked for someone commensurate with this race’s long
and storied history, the ultimate Pro Who Knows.

“Naturally, the name at the very top of our list was one synonymous not
only with this great race, but with the sport of drag racing, Florida’s
own Don Garlits.   Although he competed under the banner of an
alternate manufacturer, in the true spirit of ACDelco’s ‘all makes, all
models’ philosophy, we are honored to have “Big Daddy” join us as the
Grand Marshal of this year’s ACDelco Gatornationals.”

Jim Trace has a good problem to have. The Director of
Broadcasting/Video Communication for the NHRA has an abundance of class
drag racing videos that he’d love to market to the nostalgia starved
drag racing fans but doesn’t know where to begin.

Trace has at his and the NHRA’s disposal, a plethora of video footage
acquired when the sanctioning body reacquired the Diamond P drag racing
footage.

“We’ve got plans for the old stuff and possibly re-releasing some of the older videos,” said Trace. “That’s the plan for now.”

The NHRA took delivery of the classic footage three years ago. A lot of this footage is stored on obsolete formats.

“Some of it has to be restored,” Trace said. “We are going through the
whole organizational process with it. When we got it, it was a little
bit of everything everywhere. We had to undergo a large organization of
everything.”

WyoTech, the official technical school of NHRA, recently offered its guidance and technical know-how to Drag Race High,
a reality TV show that pits rival high school students against each
other as they build race cars. The show captured the emotion, rivalry,
and real-life lessons of preparation and competition as contestants
raced against the clock to build a race car from the ground up.

Nine weeks of classroom theory and hands-on building led two high school teams, in and in Lyles, to a final face-off on the quarter-mile dragstrip at in . Judging
the winner went well beyond which team had the fastest car on race day.
Criteria included how well the vehicle conformed to the rules, which
team had the most donated parts, which team raised the most money, and
which car underwent the biggest transformation, including the quality
of the engine, bodywork, and paint.

"The
response from the racers and the fans since JEGS took over title sponsorship of
the series has been phenomenal," series organizer and racer Troy Coughlin said.
"It's already very clear to us that we made the right move getting involved with
this popular form of drag racing. The exciting thing is we're just getting
started." 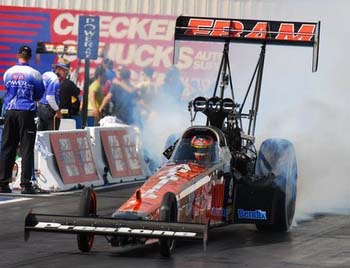 Cory McClenathan has a new friend to fill the void left when his 17-year old Cocker Spaniel passed away last year.

Cory
McClenathan enjoyed one of those bonds with a Cocker Spaniel named
Cookie. The veteran driver of the FRAM Top Fuel dragster lost Cookie
last year prior to the fall Las Vegas event.

McClenathan proudly proclaims he’s got another Cocker Spaniel. This one
is not a replacement for Cookie. Instead the new puppy is another
friend to bond with.

The new puppy was a gift from McClenathan’s girlfriend Debbie upon returning from Pomona.

Following 14-time Funny Car World Champion John Force’s dramatic crash
last September in Dallas, a decision was made by John Force Racing to
pursue the design and manufacture of an integrated composite safety
structure that could be mounted 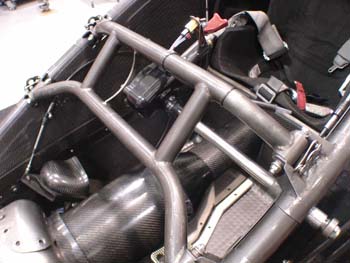 into
the existing chromoly chassis that would provide additional protection
to the driver’s lower extremities in the event of a chassis failure.

John Force Racing through The Eric Medlen Project (TEMP) brought in
Aerodine Composite Group, to develop a safety structure that would
protect the driver’s lower extremities. John Medlen, director of TEMP,
had previously worked with Aerodine Composites and knew they were the
perfect company for this critical job.

With input from all of the JFR crew chiefs and chassis builder Murf
McKinney, Aerodine Composites was able to develop a lightweight
two-piece composite footbox structure built from carbon fiber and
ballistic fiberglass that further added to the safety of the cockpit.
The initial part was designed, manufactured, and fitted to a chassis in
time for NHRA championship contender Robert Hight to race in Richmond,
Virginia, less than two weeks after John’s horrific crash.  The use of
advanced composites allowed Aerodine Composites to add the additional
protection required inside an already cramped cockpit, while minimizing
weight that could adversely affect the performance of the car.

Lew Arrington Jr., a Funny
Car pioneer, passed away on February 24 of heart disease. The former match race
icon was 69. 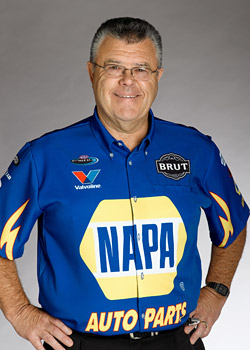 Oh, what Ed “Ace”
McCulloch would give for access to one of those miracle weight-loss
products.  You know the ones.  Their commercials proliferate late-night
television:  “Lose 60 pounds in 60 Days,
the

Easy Way
”
or “I lost (pick a number) pounds on the so-and-so weight-loss plan and so did
my wife.”

But alas, none is
applicable for McCulloch because the extra baggage isn’t around his hips.  It belongs to the NAPA Auto Parts Dodge
Charger that he tunes and Ron Capps drives.

New Funny Car rules
legislated this year piled on 100 extra pounds raising the minimum weight to
2,555 pounds, a number the former Funny Car and Top Fuel driver finds
overwhelming.  His gripe, he points out,
isn’t with the safety aspect.

“I’m all for safety,” said
McCulloch.  “I’m all for making these
cars safer. If we have to have a stronger car – which we do – I’m all for what
we have to do.”

McCulloch, a drag racing
veteran who began his successful driving career at the wheel of a late 1960s
push-started, front-motored Top Fuel dragster like everyone else drove at the
time, does have a few suggestions.