With a successful opening round in the Pro Modified Racing Association
Tour at Toronto Motorsports Park recently, the PMRA will be back at TMP
in Cayuga, Ontario for event two in the five-race 2007 drag race series.

The first event of our season hosted a record number of Pro Modified
teams”, said Bruce F. Mehlenbacher, Director of Operations for the
PMRA. “And having the 10th different winner in 10 races since the PMRA
series started three years ago I think says a lot for the uniformity of
our teams and a solid level of competition.”

The PMRA series expects to see the return of series regulars and
principals in the 2007-Point Series sponsored by Wix Filtration
Products, Valvoline, a division of Ashland Inc., Uni-Select, and Moen
Incorporated.

Dave Connolly’s Knoll-Gas Motorsports Chevy Cobalt will have a
different look this weekend when he arrives in Topeka, Kan., for the
O’Reilly Summer Nationals at Heartland Park Topeka.  But the paint job
is all that changes for Connolly, who is in hot pursuit of his first
Pro Stock championship.

Connolly, winner at St. Louis earlier this month, thanked
Knoll for “giving us all the funding we need to stay out here and run
competitively in this extremely tough class.  He’s definitely stepped up to the
plate in more ways than one.  He is one of the best owner/sponsors a guy could
ask for.  He has full confidence in his driver and team. Evan put us in a good
position with a good team and good people to work with at Cagnazzi
Racing.

Despite several rain delays Friday and Saturday, all three rounds of
professional qualifying were completed. However, Sunday brought more rain which
was expected to last all day.

“The first real glimpse of dry weather isn’t until Tuesday or
Wednesday,” said IHRA president Aaron Polburn. “So, it’s impossible to run this
race as scheduled. It’s a tough call to have to make, but we feel it’s the right
one based on weather forecasts and all the rain we’ve already
experienced.” 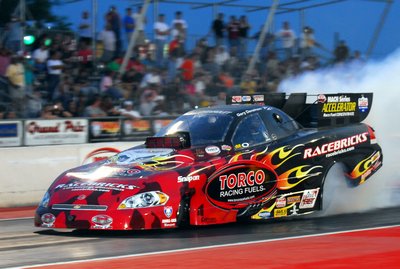 Densham held his ground from Friday night and picked up another Last Man
Standing bonus with a 4.8878, 314.02. Tim Wilkerson is qualified second, followed by Jon
Capps and Terry Haddock. Bob Gilbertson, who entered the race No. 5 in the point
standings, did not qualify.

Heavy rain has been falling all morning at England's Santa Pod Raceway, delaying
the last day of qualifying for "The Main Event," the first round of the
FIA European Drag Racing Championships.

DAVE CONNOLLY - RACING TO THE TOP

After doubling up in the winner's circle with his dad Ray Connolly at the
recently completed O'Reilly Midwest Nationals in St. Louis, that little dose of
success has breathed fresh air and new life into Dave Connolly's campaign to
capture his first NHRA POWERade Pro Stock championship. With three consecutive
top-five points finishes already in tow, and with what may be the best car and
race-team combination he's ever competed with, the Torco Racing Fuels Chevy
Cobalt driver is feeling bullish about his title chances in
2007.

"Without question, I couldn't ask for a better team or group to be
associated with," said Connolly. "Victor (Cagnazzi) has put together all the
right people toward creating a successful program, locating it in Mooresville
(N.C.) in the heart of NASCAR and building a beautiful new shop and now we're
ready to make a run at the championship. Evan Knoll is about the best team owner
a driver could have and Torco Racing Fuels is about the best sponsor a team
could have. Even when we got beat in Las Vegas, Evan said to me, 'I'm not going
to tell you how to drive. You know what to do.' He's very loyal to his drivers
and his teams.

"Tommy Utt, our crew chief, and John Utt, our clutch guy,
do a great job. Tommy's like a second dad to me and John's like a second
brother, and we've all worked together from just about day one. John was with me
when I made my first Pro Stock pass in Chicago in 2003, and other than a small
timeframe, Tommy's also been right there with us. We can talk openly with each
other because the whole team chemistry is there. Our engine program has done
extremely well. We're consistently No. 3 and 4 on the backhalf and with a little
time, we're going to be right up in front. I also have a great teammate to work
with in Jeggie (Coughlin). We were friends long before we were teammates and
none of that has changed. We were both in a slump after Atlanta, but he also
drove extremely well in St. Louis."

WJ AND THE FUZZ

For
one sunny Georgia afternoon a few weeks ago,
the parking lot at Warren Johnson Enterprises resembled the set of a reality
show, swarming with squad cars with their lights flashing and numerous sheriff’s
deputies patrolling the grounds.  Despite the official-looking nature of the
event, including one officer issuing NHRA Pro Stock legend Warren Johnson a
summons, there was no cause for alarm.  With an unexpected break in the
schedule, the GM Performance Parts GTO driver was simply giving back to his
community, taking part in a photo shoot as part of a campaign to help promote
safe driving.

“The Elbert County Sheriff’s
Department contacted us before the Atlanta race to see if I would be interested in
participating in a campaign to promote safe driving,” said Johnson.  “Naturally,
I jumped at the chance, especially since it was aimed at younger drivers, who
need as much help as they can get, although there are certainly a few older
drivers who could also use some advice.

Mark and Tammy Mazzant are the newest owners of Quaker City
Raceway according to the track’s website.

The newly sanctioned NHRA sanctioned track had been on the
auctioneers block early in 2007 and one of the oldest drag racing facilities in
the world appeared headed for permanent closure.

Mazzant got together with track owner Dan Swindell and put together
a deal that would keep the track (that is ready to celebrate its fiftieth
anniversary this year) as a motorsports facility.

“I am over the moon that the track will not be lost to
racing. I put a lot into it but could not continue to put all my efforts into
the facility and I had to give it up,” Swindell said. “I wish Mark and Tammy
every success and will help them in any capacity they need.”