NHRA - BRAINERD ROUND BY ROUND

John Force recorded his 125th Funny Car victory Sunday and secured a spot in the
Countdown to the Championship by beating fellow legend Kenny Bernstein in the
closest drag race of the 26th annual Lucas Oil NHRA Nationals at Brainerd
International Raceway. Force nipped Bernstein by .0048 seconds, or about two
feet, with a 4.794-second pass at 316.60 mph to Bernstein's 4.801 at 320.43
mph.

Force and Bernstein last faced each other in 1989
at the SuperNationals in Englishtown, N.J., an event that Bernstein went on to win
for his last Funny Car victory. Bernstein now holds a 13-8 mark against Force,
including a 6-2 record in final rounds. Force's career record improves to
125-74, while Bernstein's falls to 69-51.

"Austin Coil [crew chief] has run this track a lot
more than me from the old days of match racing and he really knows this place,
whether it's hot or cool here," said Force, who now has 11 wins at Brainerd.
"This season has been something. Early on I couldn't beat anyone, including that
girl named Force, and I remember awhile back telling Coil we were pathetic.
Something just had us snake-bit and we never did find what it was.

FINAL ROUND RESULTS FROM EPPING 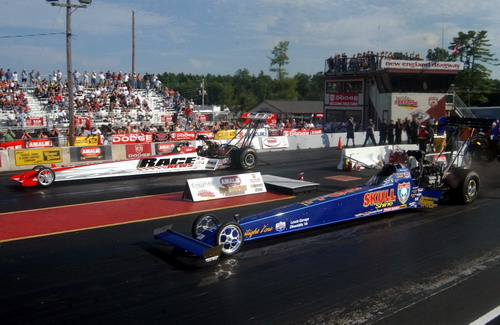 IHRA - EPPING ROUND BY ROUND

“I really just
wanted to qualify so we could come out here and have some fun on Sunday,” said
Lagana Jr. “My dad, he came down to top end crying. He was so happy. Problem is
now he wants to take a lap in the car.”

Mike Ashley had the quickest Funny Car
of all four qualifying sessions to easily secure the No. 1 position in the
elimination field of the 26th annual Lucas Oil NHRA Nationals.

Zizzo topped the Knoll Gas Torco Racing Fuels Pro Nitro Top
Fuel class with a 4.610, 320.13, which earned the
Lincolnshire,
Ill., driver Last Man Standing as well. Terry McMillen
qualified second, 4.663, followed by Scotty Cannon and Bobby Lagana Jr. Current
points leader Bruce Litton is fifth. His lead over Zizzo is less than one round,
and the two will meet in the first round of
eliminations.