The Drag Racing Association of Women (DRAW) continues to be the most
unheralded organization dedicated to helping the families of every
injured drag racer, yet they continue to do their remarkable work in a
sort of media vacuum. Everyone even remotely connected to the sport
understands what this remarkable group of volunteers does, yet the
media pays very little attention, and racing’s officials, while openly
supportive, have long since ceased making their annual $25,000
contribution. Without that support the efforts of the women – and yes,
there are a number of men also involved – are more important now than
ever before.

We caught up with Rosalee Noble and her husband, Terry, at the Summit
Racing Equipment Nationals at SREMP (ah, what the heck, let’s just call
it what it is – Norwalk), and got this report. Noble reports that the
group took in slightly more than $59,000 at their annual auction that
took place during the Joliet race, stating, “We were very pleased with
the results.

As Funny Car points leader Ron Capps aims to solidify a place in the top eight
for the new Countdown to the Championship playoff beginning at the U.S.
Nationals on Labor Day, his familiar Brut Dodge Charger will sport Valvoline
colors at this weekend's O'Reilly NHRA Thunder Valley Nationals in Bristol,
Tenn.

This is the second of four venues this season at which a Don
Schumacher Racing Funny Car will carry the Valvoline red, white and
blue.

"At Valvoline we are psyched for Bristol!" said Rob Stravitz, vice
president for global brands at Valvoline. "We have NHRA Funny Car points leader
Ron Capps running the Valvoline red, white and blue paint scheme and we have all
the DSR drivers running with Valvoline.

"We also have a stellar lineup
of Sportsman racers in Valvoline colors, and we have thousands of Valvoline
consumers watching the race in the stands and on ESPN2," added Stravitz. "If
that were not enough, Valvoline is the Official Motor Oil at
Bristol."

TJ - HITTING ON ALL CYLINDERS 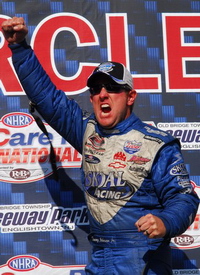 Despite an inauspicious start to the 2007 NHRA POWERade season, Tommy Johnson
Jr. and his Don Prudhomme Racing team have the Skoal Racing Chevy Impala SS
hitting on all cylinders as they make a final push to make the final eight for
the Countdown to the Championship at this weekend's 7th annual O'Reilly NHRA
Thunder Valley Nationals at Bristol Dragway.  Johnson has qualified in the top
half of the ultra-competitive Funny Car field for the last five NHRA contests
including his eighth career No. 1 qualifier at Englishtown two weeks ago.  Even
more impressively, the Skoal Racing team overcame a first-round fire at
Englishtown and parlayed the season's first No. 1 qualifier into the team's
first win of the season.  Although Johnson stubbed his toe with a first-round
loss at Norwalk after qualifying fourth, the Avon, Ind., resident sits ninth in
points and likes the turnaround the team has made heading into the final six
races that det ermine the eight qualifiers for the Countdown to the
Championship.

"We're heading in the right direction," Johnson said.  "At
Topeka we went back in a different direction (with the car), and it took us a
race or two to actually get the tune-up back to where we knew how to make a
run.  We had changed so many things that it took us a little awhile to get the
thing back to where we knew how to run it.  Now, it really responds.  When (crew
chief) Mike (Green) makes a change to the car, it does what he tells it.
Earlier in the year, he'd make a change and it really wouldn't do anything.
Once we got the problem solved and started tuning the race car, it made all the
difference in the world.  And the better downforce (with the new Impala SS) we
have over what we had last year has allowed us to run much better half-track
speeds.  Even though we've struggled, we've learned along the way what makes
this thing tick, and we're now reaping the rewards from that.

After a
season-low points position of 15th after Atlanta, Johnson finds himself just 10
points out of the coveted elite eight and gives all the credit for the season's
turnaround to the hard work and dedication of his Skoal Racing team.

Mike
Dunn was a darn good driver when he was competing in either Top Fuel or
Funny Car, but he’s clearly found a home behind the microphones of the
ESPN network. His insightful commentary on the POWERade broadcasts has
probably expanded the sport’s reach to a new audience. We caught up
with him in the pits, figuring if he was interviewing people, we could,
like, turn the tables on him for a change.

THE NOT SO DIRTY DOZEN

Twelve bracket racers from the former Norwalk Raceway Park were
branded with the nickname “The Dirty Dozen” and banned from the
facility for life and from the IHRA indefinitely. Those dozen bracket
racers were alleged to have performance-enhancing devices that would
enable them to accurately monitor elapsed time during bracket races.
This happened almost a decade ago, but those involved are proving that
time heals all wounds.

The switch of sanctioning bodies has brought about a pardon for their
alleged crimes. Crimes one of those accused still says never happened.

Dave Connolly wants to set the record straight as one of those who was
accused but never proven guilty. The Pro Stock hitter has moved well
beyond those days and admittedly struggles to remember the
controversial scenario. All he knows is that a lot of finger pointing
took place and plenty of allegations were leveled, even though little
or no evidence was ever brought to the table. To Connolly, it was
nothing more than a witch hunt.

LARRY MORGAN'S STATE OF THE UNION

Despite
his opener of, “It’s the same old crap, just a different day,” Pro
Stock Dodge driver Larry Morgan was comfortable in what’s become his
new home town track in Norwalk. “I only lived a few minutes from Columbus,” he
lamented, “but this place is great, and it’ll have to be my new home
track.

“This is an absolutely beautiful facility. I’ve always said it was
beautiful. I’ve raced here my whole life, and have always enjoyed the
Baders, they’ve been very good to me. I think Summit coming in is
great. It’s like it’s in their back yard. If they can make this
facility like it needs to be, this will be a great place to race.

“I think this track is goig to be right up on the list of the best
place, but I hate the fact that they left Columbus because it was so
close to home for me, but this facility is definitely better than the
Columbus facility.”

Dave Connolly made his second trip this season to the NHRA Pro
Stock winner's circle with a final-round victory over Larry Morgan at today's
inaugural Summit Racing Equipment Nationals at Summit Racing Motorsports Park.
The 24-year-old Connolly, who hails from nearby Elyria, Ohio, turned in an
impressive weekend performance that culminated in his 11th career victory, and
low elapsed time of the meet for the Torco Racing Fuels Chevy
Cobalt.

"This is pretty sweet," said Connolly. "I grew up at this track -
I made my first run in a racecar here, so to come back at the first NHRA event
ever held here, and to be this successful, the weather to be this nice, in front
of 40,000 fans in the seats, this is about as good as it gets."

Connolly
entered the Sunday eliminator with his Torco Racing Fuels Chevrolet qualified in
the No. 4 position. He defeated Warren Johnson in round one with his Chevrolet
running the quickest time of the meet at 6.628 seconds. He came back in round
two to defeat Greg Stanfield, and then advanced to the championship heat with a
semifinal-round win over Cagnazzi Racing teammate Jeg Coughlin Jr.

Matt Hagan Racing is proud to welcome Cody McManama to the team.
25-year-old McManama, formerly a Pro Mod driver for Cody Mac
Motorsports from 2001 to 2004, has also crewed for Pro Street Champion
Pat Musi and as served as team manager for a Pro Stock Team.

McManama will be filling the role of clutch and chassis specialist for
Matt Hagan Racing, as well as assisting Matt with day-to-day operations
of the team.

A month ago, the NHRA’s technical department added ten pounds to the
minimum weight for Buell Pro Stock Motorcycle teams. In successive
races, the Harley-Davidson and Suzuki teams rewrote the performance
standards. The Buell teams fell behind.

The NHRA made an adjustment earlier this week to restore parity.
Instead of removing the extra ten pounds from the Buells, the NHRA gave
back five pounds and nailed the Harley-Davidsons and Suzukis for a five
pound increase.

Wouldn’t it have been easier to remove the 10-pound adjustment to the
Buell teams to achieve the unified minimum weight? That’s the question
pondered by many in the class.

“I think they know they made a mistake,” said Matt Smith, the rider
cited for the Buell weight adjustment following his record-setting
performance in St. Louis. “They’ll probably never admit it. It hurt us
for a couple of races and luckily we have this new Countdown to the
Championship. Each race is not as critical as it used to be.”

FINAL ROUND RESULTS FROM NORWALK