A persistent Jerry Toliver is determined to soon get back into the NHRA Funny Car fray. With some good fortune and the sealing of a new partnership, he might be back in the saddle to open the Powerade Drag Racing Series next year.

“We’re very close at completing a deal for 2007 and beyond,” Toliver said from his race shop in Temecula, Calif. “Hopefully we can get it done real soon. 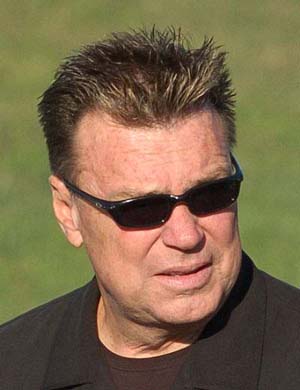 A persistent Jerry Toliver is determined to soon get back into the NHRA Funny Car fray. With some good fortune and the sealing of a new partnership, he might be back in the saddle to open the Powerade Drag Racing Series next year.

“We’re very close at completing a deal for 2007 and beyond,” Toliver said from his race shop in Temecula, Calif. “Hopefully we can get it done real soon.

“Obtaining sponsorship is a tough deal in any sport, and in the NHRA, it’s very difficult,” he added. “We’ve been fortunate in the past to have had some great sponsorships. … We’re very close to getting this deal done. We’re excited about going forward for next year and beyond.”

Toliver, who last raced in Funny Car two years ago on a limited budget, is working with Toyota and Kalitta Motorsports to drive one of the program’s pioneering Solaras for next year.

Toyota and Michigan-based Kalitta Racing debuted the first Solara Funny Car at the U.S. Nationals on Sept. 1. Scott Kalitta, a two-time Top Fuel world champion who made the switch to Funny Car this year, has made steady gains with Toyota during the second half of the season. Kalitta, a 17-time national event winner, qualified fourth and reached the semifinals before losing to the eventual winner, Eric Medlen, at Richmond, Va., on Oct. 15.

The ’07 forecast calls for Toliver to race for an independent team, but one that will share data with the Kalitta clan to form a formidable Toyota-backed tandem. Toliver, a 56-year-old Southern Californian, is optimistic that he can secure sponsorship and will make that announcement at the appropriate time. 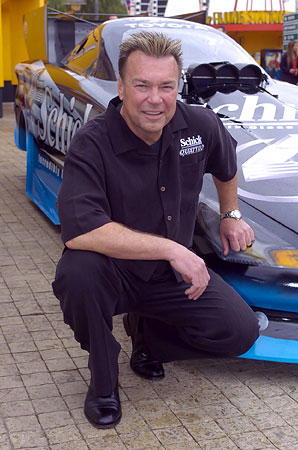 In 2002, Toyota made history with the debut of a Celica, the first foreign manufacturer to compete in the NHRA pro ranks. Two years later, Toyota again made history when it became the first foreign maker to win in a pro division, when Toliver and the Alan Johnson-prepared Celica captured the Winternationals at Pomona, Calif. Toliver, who qualified No. 15 in the Schick Quattro Celica, knocked off Medlen, Cory Lee, Del Worsham and finally, Gary Densham for his fifth and latest career “Wally.”

In doing so, Toliver posted career bests for elapsed time (4.738 seconds) and speed (328.22 mph, the fourth fastest in history at the time).
“I woke up the next morning and couldn’t believe that it actually happened,” Toliver said of the stunning win that came after an 18-month hiatus.

But it would prove to be Toliver’s last visit to Victory Lane.

The Schick deal, as Toliver explained, was a short-lived one-year deal. The program’s objective was to explore and sample the drag racing market with some success. By midseason, Toliver learned Schick would end its run at the completion of the ’04 season. A top-10 team, Toliver struggled home. The team operated on a small budget that didn’t allow for frequent testing or the full means to stay competitive with the major players.

Without a ride, Toliver stayed busy in the shop the past few years, primarily working for Toyota in developing its racing program with other pro teams. That relationship has put Toliver back onto the driving landscape for next year.

Time away from racing has been difficult for Toliver, who had made his mark as a late-comer to Funny Car.

Toliver was a longtime drag boat racer until he seriously was injured in a crash, forcing his retirement in 1995.


The nephew of legendary drag racers Art and Jack Chrisman, Toliver then took to racing on land. He made his Funny Car debut in 1998, and won his first national by upending John Force to take the NHRA Finals in Pomona a year later. In 2000, he was a title contender driving the World Wrestling Federation-sponsored Pontiac for crew chief Dale Armstrong. He delivered three national event wins and led the series standings at midseason before fading to third. For his efforts, he was named Car Craft Magazine’s “Person of the Year” for contributions made to the sport.

Toliver knows he has the crew and the resources to get back toward the top. He has never lost sight of his dream to race again against the likes of Force, Ron Capps and Gary Scelzi.

“It’s definitely a lot of work,” Toliver said of his comeback crusade. “You have to love the sport and I love drag racing. But you’ve got to keep the faith, and I’m adamant about getting the sponsorship, returning to drag racing and continuing for several years.”

Toliver actually was a candidate for a Funny Car opening this year, but Kenny Bernstein got the nod. Bernstein, a six-time world champion who retired at the end of the 2002 season and replaced his injured son Brandon to race partly in ’03, will make his comeback next year as the driver of the Monster Energy Dodge Charger Funny Car. Bernstein’s race team is sponsored by Budweiser, and Anheuser-Busch wholesalers distribute Monster products.

“Ultimately, Kenny got that deal with his sponsorship,” Toliver said. “It’s always disappointing when you don’t get the deal. It was a great deal and Kenny will do a great job over there. He’s a great ambassador for the sport and a great driver.”

Toliver understands how such deals come into play.

“It tests your resiliency. You’ve got to learn to take no for an answer sometimes, and sometimes it’s hard to swallow,” Toliver said. “It certainly would be better if NHRA is at the next level of sponsor procurement with the corporate level. But, that being said, the sport is growing leaps and bounds and is moving forward. The sponsorship is there, but it takes awhile.”

Toliver has come full circle in an unsympathetic sport of extreme highs and lows.

“I think the big lesson I learned is to not take it for granted,” Toliver said in reflection. “I got thrown into the fire in 2000 from the start. We won the Winternationals and led the points from race one and kept it going. We just marched on through until mid-season. I had never been in that position before.

“I think now I appreciate more of what it takes to win a national event, much less lead the points. It is very gratifying to be there,” Toliver added. “I’ll just savor those moments more now and understand that it can be taken away from you just as quickly as you earned it.”