For Bill Reichert, it was just a matter of completing some unfinished monkey business.

Down and out after a disappointing run at the spring Gatornationals, the veteran Top Alcohol Dragster driver returned home to Owosso, Mich., to assess his situation. “We had run several 20s (5.20-second runs) but we red-lit in the second around. And that just devastates you,” said the 55-year-old Reichert. “You pride yourself on being a good driver … and the job really isn’t that hard.” 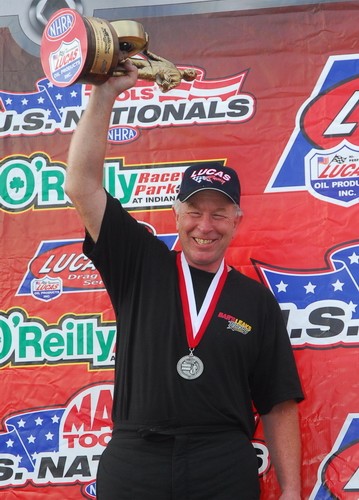 For Bill Reichert, it was just a matter of completing some unfinished monkey business.

Down and out after a disappointing run at the spring Gatornationals, the veteran Top Alcohol Dragster driver returned home to Owosso, Mich., to assess his situation. “We had run several 20s (5.20-second runs) but we red-lit in the second around. And that just devastates you,” said the 55-year-old Reichert. “You pride yourself on being a good driver … and the job really isn’t that hard.”

Reichert was making it more difficult than it had to be from the cockpit, and was reminded of that by Bob Mermuys, a friend and Bar’s Leaks president who sponsors the Michigan-based dragster. Reichert had mentioned to Mermuys that the driving aspect was “so easy, I could teach a monkey to do it.”

He returned to Reichert’s engine shop the next day with a toy monkey, a reminder to his driver that keeping things simple and easy actually would go a long way toward chasing down a national points title.

With the monkey forever tied to the frame rail, a composed and focused Reichert went out and won his next race, a national event at Houston, which became a springboard to capturing his elusive first national championship in the Lucas Oil Drag Racing Series.

Reichert rode the momentum, unleashing a string of dominating performances. He won three nationals, including the big one – his first U.S. National at Indianapolis Raceway Park on Sept. 4. He also won five consecutive division races, four of which came from his own backyard tracks sprinkled in North Central Division 3. 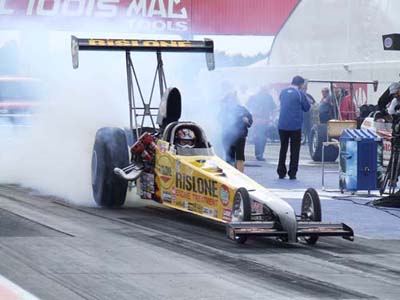 The lifelong drag racer, a determined and hard-working driver, had finally seized his national title. “It’s just an awesome feeling,” Reichert said. “I’ve raced essentially all my life in some form or another, and championships are a measure of a racer. They are a thing, that once they are achieved, show that you are a real racer. And to achieve it, it’s a lifetime dream come true.”

Reichert used years of experience and wisdom – not to mention his talented son’s calls from the family’s engine shop – to maintain consistency and win rounds. “Our team has fewer resources than others, and we make due with what we’ve got,” Reichert said. “But my son (Andy) and I love engines. He gives me input on tune-ups, and we’re able to reach a certain performance level. The years of experience, the understanding of the tune-ups, we use that to our advantage.”

The younger Reichert enjoyed the ride this season, watching his father’s quest
“It’s pretty amazing. I’m definitely real proud of him,” he said. “He’s been at it for a long time. It’s quite an accomplishment.”

Reichert began racing go-karts when he was around 12 or 13, before discovering the drag strip and the sportsman ranks. He drove modified eliminator, then tried comp eliminator before taking a four-year sabbatical to establish his engine-building business in Owosso, which sits between Lansing and Flint.

In 1992, Reichert returned to racing, earning his license in Top Alcohol Dragster. He soon struck a partnership with Mermuys and began to tour.

Always steady and ready, Reichert has won his share of races but never the ultimate prize. He finished a close second to Oregon’s Mitch Myers, the TAD’s current national record holder in elapsed time (5.109 seconds), for the 2004 series championship. At the prestigious U.S. Nationals, he knocked on the door but lost in the 2001 final. Just last year, Reichert delivered a national-record speed mark of 280.66 mph at Joliet, Ill.

But this year was different. The Reicherts found a comfort level with parts, performance and crew. They also got some breaks. The team decided to stick with an older frame, a 1997 Bowen chassis that proved reliable and strong. The Bowen family shop, run by Mike with Scott doing the building, conveniently is located close by the Reichert’s engine plant. The nitro-burning 421 cubic-inch engines also were proven commodities. Andy and Bill got the most of their creations. The team also benefited greatly from Bill’s wife, Gloria, who handles all aspects of the team, both in the pits and from the startling line.

Team Reichert also got the continued support of Mermuys’ Bar’s Leaks, and ventured to debut the Bars’ Products’ Rislone Engine Treatment at Indy this year. Lane Automotive and its product line, All-Star Performance, also came along for the ride.


The plan all along was to run down a national title. The Reicherts planned national stops at tracks where conditions wouldn’t be so severe on A-Fuel cars.
But once the weather turned hot and humid in the Midwest, the Reicherts adjusted well for the conditions. They found the right tune-ups for the right conditions, neither overpowering the tracks nor second-guessing themselves.

It began in Joliet, where Reichert rolled to victory. It continued at Gateway International Raceway outside St. Louis, where the Reicherts responded with their fourth straight division win on Aug. 6. During Friday qualifying, Reichert broke the track’s E.T. record with a 5.305-second run at 274.27 mph. He continued that with 5.3-second wins in the first two rounds of eliminations on Sunday. He punctuated the weekend by beating reigning division champion Marty Thacker in the final with a 5.346-second, 271.35-mph pass to Thacker’s 5.981-second, 188.89 mph effort.

A week later, Reichert won his second national, laying down a 5.244-second, 275-mph final-round pass at Brainerd, Minn. Reichert then put away Randy Meyer to claim his first win at storied Indianapolis. Reichert, after qualifying No. 2 in the quickest field in class history, set low E.T. in every round, including a career-best 5.180 at 278.35 mph in the second round. That E.T. remains the quickest run by an A/Fuel Dragster this year and the seventh-quickest ever.
In one of the quickest TAD finals in history, Reichert chased down Meyer, stopping the clock in 5.244 and 271.13. Meyer followed in 5.273 at 267.37.

“I just kept thinking that this is just anther race,” Reichert said. “I was able to keep composed. To see the win light come on at the end of the track was an amazing thing.”

After a division win at Columbus, Ohio, Reichert finally clinched the title by reaching the semifinals at Richmond, Va., on Oct. 8. By doing so, Reichert mathematically eliminated Division 7 runner Sean O’Bannon, of Alta Loma, Calif., and avoided the prospects of coming to either Las Vegas, Nev., or Pomona, Calif., to block O’Bannon and secure the necessary points for the crown.

“I don’t think there was any extra (incentive to win the title) this year. We were close before,” said Andy Reichert. “We had a real good year this year. Everything worked out and we seem to get the breaks when we needed them and the others guys didn’t. And that’s all that separates you.”

With the title in hand, Reichert is enjoying the moment and is making plans to defending it next year. He has fielded offers to become a crew chief for other teams, but hasn’t been persuaded yet to surrender his seat. “He will not give up and that’s the bottom line,” Andy Reichert said of his father. “He works on the car every day after work. He’s out there in the garage, working on it. That’s his life and he isn’t going to quit. He’s going to keep going and going.”