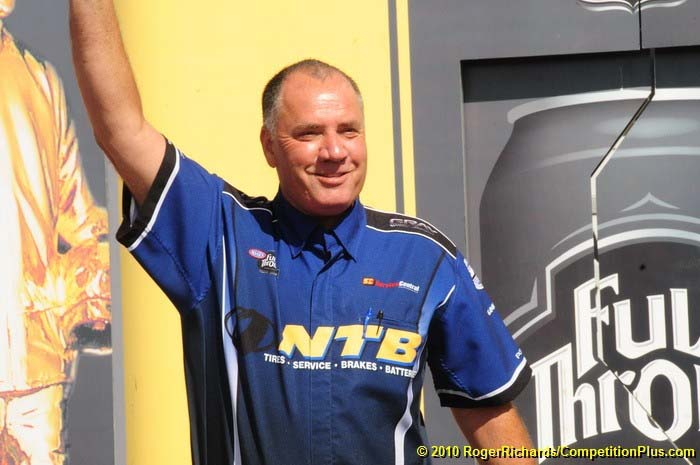 Come and listen to my story ‘bout a man named Gray,
A quick Pro Stock racer, liked to live his life that way --
Then one day he was lookin' for some fun
Sold his oil firm for a couple billion  . . .
Bucks, that is -- for black gold, New Mexico tea.

Well, the next thing you know, ol' Gray's a billionaire
Son Shane is beatin' him, but aww -- he doesn't care --
Spendin' kids' inheritance -- he's really on a spree --
Now he's focused on his Pontiac and ready for Indy ...


Veteran drag racer Johnny Gray often prefaces his statements with the reminder: "I've been doing this for 38 years or so . . . " 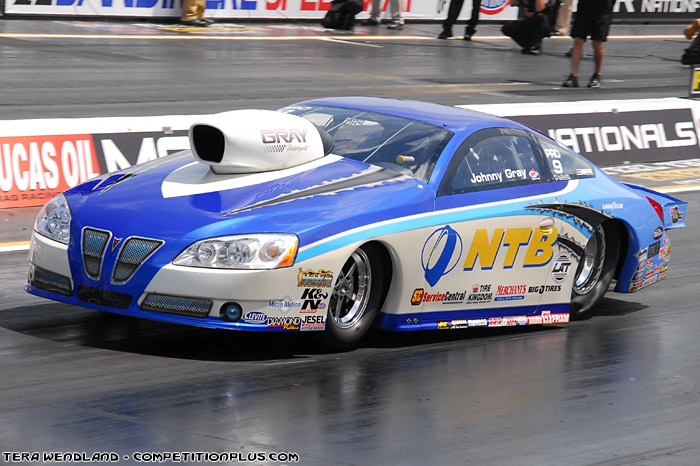 He has been a father that long.

Johnny Gray is entitled, although (at least in a political context) the New Mexico native would spit out the word "entitled" as if he accidentally gobbled a mouthful of serrano chile peppers.

Gray deserves to take a breather from the cutthroat, government-badgered world of the oil and gas industry. He has earned the right to enjoy the profit he and his sister made July 19 from selling the assets of their Marbob Energy Corporation to Midland, Texas-based Concho Resources for, according to the Roswell (N.M.) Daily Record newspaper, $1.65 billion, including $1.45 billion up front.

In oil-and-gas-industry lingo, the term "play" means a geographic area targeted for exploration because of favorable survey results or production numbers from existing wells. Concho executives said Marbob's holdings, located in the Permian Basin of southeast New Mexico is "in one of the most exciting emerging plays in the industry today" with its 76 million barrels of oil equivalent reserves and about 2,300 drilling locations.

The racer's father, John R. Gray, founded Marbob in 1974, and he and business partner Mack Chase named it for their wives, Bobbie Gray and Marilyn Chase. By the time Johnny Gray and his sister sold it, the company was pumping about 14,000 barrels of oil a day. Gray was accounting for an annual estimated revenue of $100 million-$500 million and was responsible for about 75 employees at the Artesia, N.M., headquarters.

That used to be a dream he didn't dare articulate. He called it an honor to race Greg Anderson and Jason Line: "I can remember in years past, sitting at home on Sunday evening, watching the Pro Stocks on TV and wondering if I'd ever get to meet [the drivers], much less get to race them."

READ THE FULL SIDEBAR HERE
"To be honest with you, it became a runaway train. It was growing so fast," Gray said, adding nevertheless that it "was an extremely difficult decision to make. But the kids (sons Shane and Jonathan, who race and help with the family's in-house engine program in Denver, N.C.) didn't want to run it." He said he isn't interested in remaining in that industry "till the U.S. gets its act together" and stops "trying to run domestic oil and gas out of the U.S." Taxes, government interference, and environmental concerns sapped the fun from his job.

Said Gray of his Marbob Energy selling price, "It's a lot of money. It's all great. But 38 years ago, my wife and I put everything we owned into our Datsun pickup truck and moved to Carlsbad, New Mexico. We moved into a little apartment in an alley. I can drive you to that apartment. I still know where I came from. I know how hard my father worked and how hard all the people who have worked for us have worked to get me to where I am.

"So it doesn’t change my lifestyle," he said. "I have been blessed. It won't change me, except maybe I won't die from too much stress."

That is, unless he gets overly wound up about the drama du jour in the Pro Stock class.

To set the record straight, he said it's pure rumor that he offered or tried to buy the NHRA.

"I just got rid of one adult day-care center. Why would I want to run the NHRA?" Gray asked with a chuckle.

But he has earned the right to express his opinions about the NHRA in defense of the class he races in. Truth is, he said sees the NHRA as being in what he called "a no-win situation" on so many fronts.

"I just wish they would understand that Top Fuel and Funny car are not the only classes. They hype the fuel cars to the point that people think that's all there is," Gray said. "I just think that the NHRA does not understand the Pro Stock class. The track is prepared for the fuel cars.

"In Graham's defense," he said, speaking of Graham Light, NHRA senior vice-president of racing operations, "Graham is learning that there is another generation of drivers coming along who loves Pro Stock. He's beginning to understand that there are a lot of people who love the factory hot rods. Our races are won all the time by a few thousandths of a second. Ninety-nine percent of the time, our cars go down the track and it’s going to be close at the other end. And when we test, we're fighting for a couple of thousandths of second -- not hundredths -- thousandths.

"Believe it or not, it costs a fortune to test a Pro Stock car," Gray said. "It costs $70,000-$80,000 just for the parts and pieces for one engine. And that has nothing to do with the technology part of it. It costs as much to run a competitive Pro Stock car as it does to run a so-so fuel car."

That shows Gray isn't coasting through drag racing. He chose the hardest, most competitive class in which to compete -- maybe the most expensive for the dollar-to-E.T. ratio or for return on investment. He knows from experience. He has raced in seven different NHRA eliminator categories during his career.

So he has earned the right to spend his kids' inheritance -- the notion that several years ago inspired his racing team's parent company, SKI Racing. This year, with rookie son Shane three spots ahead of him going into the Countdown, starting with the Sept. 2-6 Mac Tools U.S. Nationals, Gray is getting his NTB (National Tire and Battery) Pontiac GXP ready to roll.

Gray was Funny Car runner-up to Tim Wilkerson in the 2003 U.S. Nationals. This year, with his team's in-house engine program, he is a serious Pro Stock contender this time.

"In October we didn't have any of this, and in a few months we put it all together," Gray said, looking back on the development of his engine program and his sponsorship package for the two-car platform.  "We're real excited to have NTB, Tire Kingdom, Merchant's Tire and Auto, and Big O Tire join our program."

Back at Pomona, he predicted, "You will see us start out slow. By mid-season, we'll be strong, and by the end of the year, we'll be a top team." And he's right, as SKI Racing represents 20 percent of the Countdown lineup. KB Racing, featuring champions Greg Anderson and Jason Line, is the only other two-car team in the Pro Stock title chase.

He has earned the right, after going the motor-renting route, to have his own engines, the freshest he can put in his car and in Shane's. Central to his whole philosophy is the "and in Shane's" part.

Gray had spent his career depending on the kindness of his competitors. He  discovered that when it comes to racing, expecting to perform well and make money at doing it, kindness is a concept that doesn't compute.

In other words, as he put it, 'You know that when your competitor prepares your engine, you aren't going to get the best one in the shop." It's simply a fact. 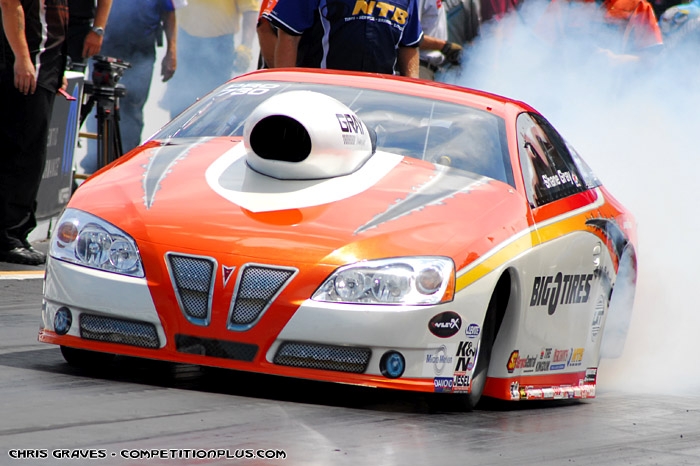 "I've been done that way, and I refuse to do somebody else that way. Right is right and wrong is wrong," Gray said.

So his own engine shop hums along, already having given him and his son the edge to make the Countdown (while such talented drivers as Kurt Johnson, six-time champion Warren Johnson, Larry Morgan, Rickie Jones, V Gaines, and Bob Yonke missed the cut this season).

However, Gray indicated he would have to think hard before renting motors to anyone, although he has at least three drivers wanting to become customers. "I don't know if  I could do it and have a clean conscience," he said.

"It cost about a million a year to rent a motor," Gray said. And when somebody steps up and hands you a million dollars and you tell him, 'You're going to have the same stuff I've got,' then you have to be willing to do that. If that guy has a problem with his engine, you have to be willing to say, 'Here's my engine and my carburetor and my headers' and I'll take what's in your car and put it in mine' and not take something out from under the bench for yourself."

Maybe when he retires from driving? He said then he'll be willing to tell a customer up front, "You can have the second-best motor. The best is going in my son Shane's car."

Said Gray, "You don’t take the money if you’re not willing to do that. If I didn't do what was right, I'd still have get up in the morning and look at the guy in the mirror when I'm shaving. And I'm not going to like him."

He said, "In some classes that's OK" to prep your rivals' engines -- "but not in Pro Stock." A past engine supplier told him that his own engine is only "a little better" than Gray's. "I've been beaten by a few 10-thousandths of a second," Gray said, asking then, "How much is a little better?"