NIVER REMEMBERED AS RACER AND FRIEND 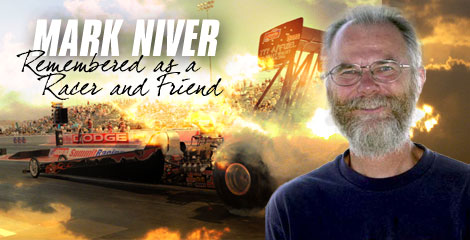 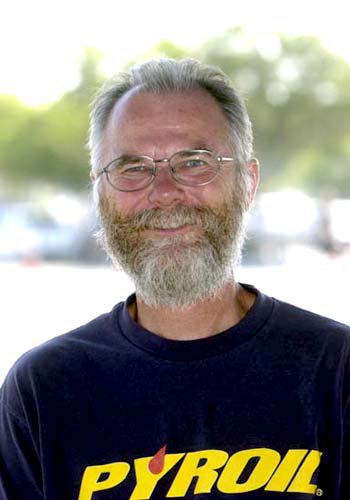 Sportsman racers mourned this second top-end fatality in the past three national events, and the consensus was that Niver was one of the sport's most popular competitors.

“He was practically a father to me. He and my dad were pretty much best friends,” Top Alcohol Dragster driver Kyle Rizzoli, of San Luis Obispo, Calif., said Sunday as he serviced his car that was pitted next to Niver's. “We vacationed together.

“You can't replace a Mark Niver -- ever,” Rizzoli said. “You can talk to anyone out here at the racetrack, and there wasn't one person that didn’t love him. He was a true racer, racer's racer, totally old school, built all his own stuff.

Rizzoli's father, Jim, also drag raced, and Rizzoli said Niver and his dad “had the funniest little competitions with each other, designing and making little winglets and stuff for the race cars. Just the engineering -- you just don't find people like that anymore. He had the old-school craftsmanship. He did it all.”

Niver used to race in the Top Fuel class, and among his close friends is veteran nitro-class crew chief Johnny West. “The Top Fuel guys had respect for him. He's probably one of the most respected guys out here.”

Morgan Lucas, whose family's Lucas Oil company funds the sportsman earnings program and built an impressive sportsman-racing record,  said, “Mark Niver is one of the most awesome people I've ever met. He's a great craftsman and a great human being. He was more optimistic than anyone I've ever met. The sport had a big loss today.”

Huntington Beach, Calif., driver Larry Miersch and his team worked closely with Niver, and Miersch said after learning of Niver's death, “He was a pure gentleman . . . such a kind man. The guy would do anything in the world for you. He was always a positive individual, a gentle, gentle human being. No matter what happened or what kind of thrash he was in, he'd be there to help you.

Miersch said Niver won here at Seattle a couple of years ago, completing back-to-back national-event victories. “It was awesome.” He said Niver's celebration was being “with his friends and his family, (and he'd) sit back with that big ol' smile he had on his furry face, sit back and have a Coors regular. That's exactly what he'd do.”

SpeedZone Magazine journalist Bob Wilson remembered Niver as someone “who always had all the time in the world for anybody. No matter how badly things were going for him, he was always smiling, always upbeat, always positive. He was the kind of guy when you were around him he made you feel better.

“He was a brilliant guy but very humble,” Wilson said. “He built his entire car, machined all the parts. He was a master machinist.”

Rizzoli said Niver would not have wanted racing to stop on his account, said the show should continue. "That's what he would've wanted. We're racers. If I got killed, I wouldn't want people to stop racing. I'd want people to get right up on that horse and do it. We're out here because we love this. There's inherent danger. It's just you hate to see stuff like this.”

Niver, who won in his final pass, had beaten Shawn Cowie with a 5.364-second elapsed time at 271.79 mph. Rizzoli guessed that Niver, applying his brakes, had trimmed his speed considerably by the time he made contact with the netting beyond the sand trap that ends the shutdown area.

That handed the event victory to Los Angeles driver Chris Demke, who said, “This is not how I wanted to win this race. I want to dedicate this event to Mark Niver. He was doing what he loved most.

“He was just that guy everybody loved,” Demke said. “You could always turn to him for a happy handshake. He was one of the nicest guys ever.”

Will Hanna, a veteran Top Alcohol Funny Car and Top Alcohol Dragster crew chief, was stunned by the news of Niver's death.

“I'm kind of numb right now,” Hanna, who also used to drive an Alcohol Funny Car, said. “I didn't really know Neal Parker, who we lost just over a month ago. I was pretty close to Shelly Howard and Darrell Russell, so losing another driver I knew pretty well kind of stings pretty hard. It is just a really sad deal.”

“Mark was a great guy with a great team,” Hanna said. “He would lend you the shirt off his back to help you out or make one. That's the kind of guy he was. For a long time, he made nearly every part on his race cars himself. He even ran cylinder heads he made before he switched over to the conventional fat head combination with his A-Fuel car. If I'm not mistaken, I think he was the first guy back in the day to run a PSI Supercharger, back in 1987 or 1988.

“He was one of those guys who never had anything bad to say. He always had a positive attitude, and even if he would disagree with you he would tell you in a respectful manner,” he said. “He was really a class act, a smart guy who was an innovator. He was as-good-as -gold type of person. His cars also were not only fast and winners, but they were really a piece of art from a machining and engineering standpoint.”

Sunday's crash thrust safety concerns to the forefront once again.

Rizzoli said “safety first” always is everyone's concern and suggested some ideas that might be helpful in the future.

“Mark had a freak breakage. It was some sort of part failure. No one could have prevented what happened,” he said. “(Racing to) 1,000 foot would be the logical thing. I don't like the nets. With Mark, he didn't go in that fast. It was just more how the dragster got caught up in the net. I've never seen a dragster enter a sand trap and come out well. The nets are not designed for dragsters, and they've got to change that.”

He said, “NASCAR and IndyCar, we've got to look at their technologies. Especially in run-off areas, they don't have nets. They have cushions and that kind of stuff that displaces the forces.”

Nets, he said, might stop a car but in the case of dragsters, “it's not a graceful stop. Something's got to give, and it's going to be the chassis every single time. So I think some sort of the cushion or tires or barrels with sand would be better. It wasn't a high rate of speed (with which he entered the sand pit).”

Top Alcohol Funny Car driver John Lombardo Jr., who crashed into the netting at Pacific Raceways in 2008, said, "It's tougher for a dragster -- so much spindly, sharp stuff that can get tangled with the net.

The Northwest Nationals is the 14th of 23 stops on the Full Throttle Drag Racing Series tour. The next race will be this weekend at Infineon Raceway at Sonoma, Calif., for the middle race of the NHRA ‘s Western Swing.