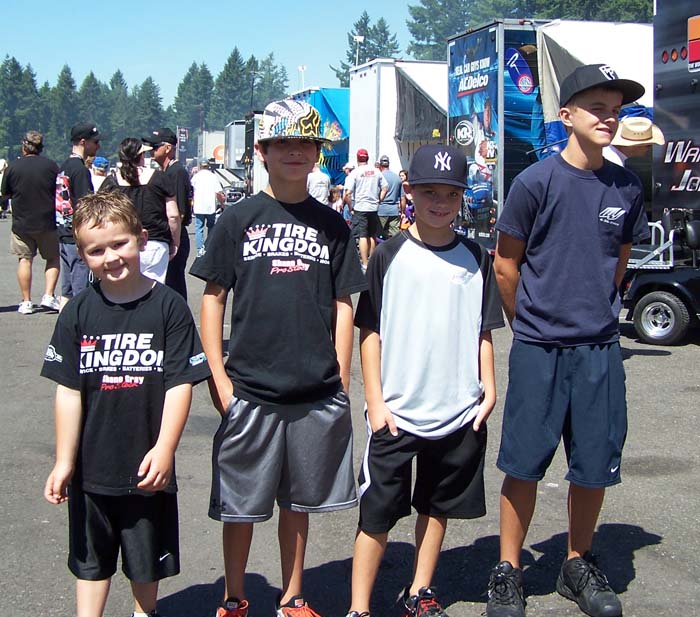 Because they sometimes are separated by ten-thousandths of a second on the racetrack and as few as one or two points in the standings, Pro Stock drivers guard their proprietary information carefully. They frown on anyone trying to photograph their engines. They often cover up their handiwork with a blanket. They're always on guard for technology spies. 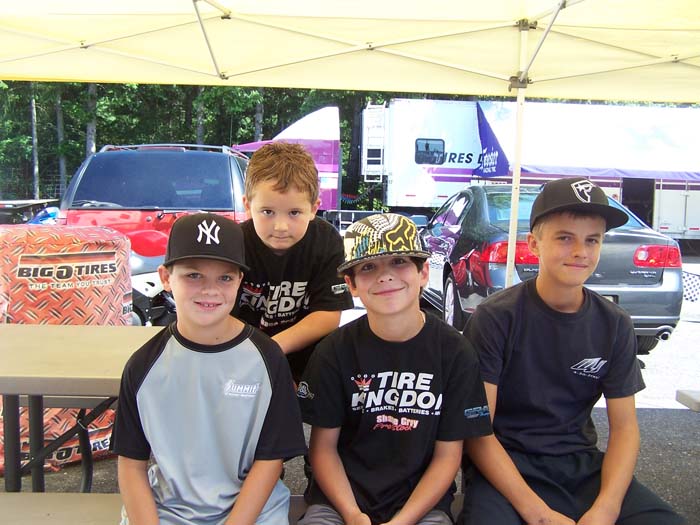 Because they sometimes are separated by ten-thousandths of a second on the racetrack and as few as one or two points in the standings, Pro Stock 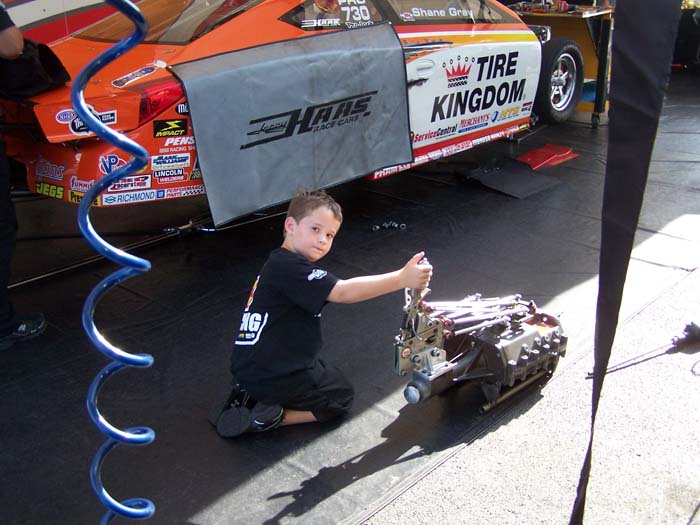 The Gray boys appear to have a future in drag racing ahead of them. [Top] Taylor Gray tries out his dad. Rookie of the Year candidate Shane Gray's transmission, while [below] Bryce [14] packs his grandfather Johnny Gray's parachutes. 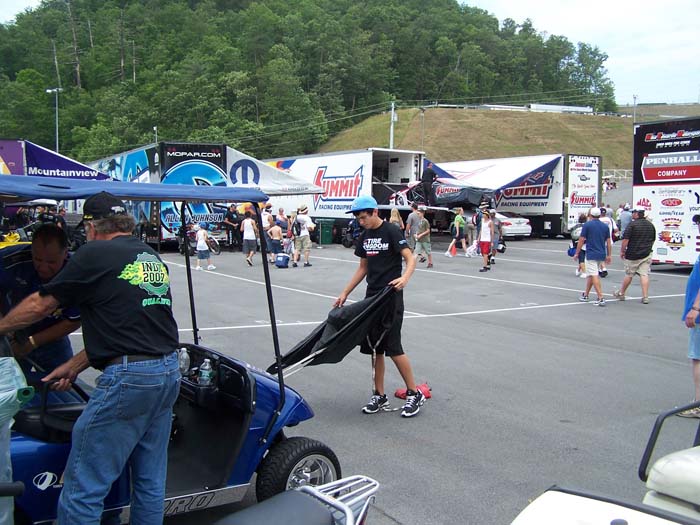 drivers guard their proprietary information carefully. They frown on anyone trying to photograph their engines. They often cover up their handiwork with a blanket. They're always on guard for technology spies.

Amber Gray, Shane's wife, corralled them Friday during the NHRA Northwest Nationals for an excursion to a nearby shopping mall. There the gang bought matching baseball caps -- which they had festooned with the words "Hey, Baby" -- along with SpongeBob Square Pants T-shirts and goofy glasses. (They skipped the double-secret decoder rings -- too.)

Cody Anderson will ride to Sonoma for next weekend's FRAM/Autolite Nationals in Shane and Amber Gray's motor home. Then at Denver, in a last hurrah before they all head back to school, Amber Gray has planned several outings: riding pit bikes and go-karts and an indoor skydiving experience.

"It's an awesome sight, to watch all the different kids run from pit area to pit area to pit area," Johnny Gray said. "And the adults are out here, [saying to each other,] 'Don't be looking in my pit area very much.' But the kids are awesome. They play together. They run together.

"Greg Anderson and Jeg, we don't go in their pit area. They don't come in our pit area. That's Pro Stock. That's an absolute no-no," he said. "But our kids run back and forth between the two and play and run around together. I've been racing a long time, and it's real good having a family here and having grandkids here running around and participating. They get to spend time with their parents, and it's a neat deal."

Earlier in the weekend, Gray said, "My grandkids are down at Greg Anderson's, and I'm not the least bit worried about them. They're in amongst good folks. The pits are full of good people."

Unlike the "Gen2Cru" that formed with second-generation drivers and contemporaries Ashley Force Hood, Brandon Bernstein, Morgan Lucas, Eric Medlen, and J.R. Todd, this Pro Stock posse has no clever name.

Johnny Gray didn't have the luxury of being one of those freestylin' pit kids when he was young. "My mother kind of liked racing, but my dad didn't like racing at all. He really didn't come around until about the last five years of his life, when I was running fuel cars. He got really into it and started coming and watching and we had a big time."

But when his younger son, Jonathan, was growing up and Gray was driving in the alcohol ranks, "half the time, when we got all loaded up and got ready to go, we had to get on the golf cart and go down through there and find him. He'd be down at Brad Anderson's. He used to hang out with Lance Larsen at (Funny Car driver Dean) Skuza's deal. These people are all real good with kids."

Said Gray, "NHRA drag racing is a family sport, and if you look around, all the proof in the world's here. That's what it's all about. It's a family sport. It's a good deal."

While the teens and 'tweens have their own brand of fun, Shane Gray's five-year-old son, Taylor, has his eye on his own team someday. He has decided at the moment that he wants to drive a Pro Mod car, but he also might be eyeing the jobs of crew chiefs Jim and John Yates and Craig Hankinson.

"He's a mess," Johnny Gray said endearingly of his grandson.

From left to right: Taylor Gray, Tanner Gray, Cody Anderson and Connor Johnson.
susDuring a recent testing session at Bandimere Speedway near Denver, Taylor said he "wanted a headset. The guys at Bandimere found him a headset, and I had a radio that will receive but won't transmit. So it was perfect. We put a headset on him, and he walked out with Craig when we were testing. It was great."

Young Taylor had his first taste of excitement in a Pro Stock car when he sat alongside his dad during the warm-up at Topeka and accidentally put it in gear.

"Sunday morning we were warming the car up, and Taylor was sitting in the passenger seat," Shane Gray recalled. "He looked at the gear shifter a couple of times, then he looked back out the window, and he looked back and looked up again, and just in time I saw his little hand reach over there and yank it. It didn't do anything. It just went in gear for a second. The tires started turning. It scared him. You've got to yank on it, but he's a pretty stout little guy."

Johnny Gray has chuckled through this summer's family mayhem, watching the whole scenario. The parent company of his and Shane's racing team is SKI, which stands for "Spending Kids' Inheritance." Said Gray, "Now my kids are spending their kids' inheritance."

Ironically, he has a special photograph from his young days that illustrate how lasting young friendships can be.

His father's brother was friends with the uncle of a little girl named Terry. They eventually took a job in Colorado, drilling water wells. "Everybody stayed in camps back then," Gray said. He has a photo of himself and Terry "playing together in the sandbox [wearing] diapers. We grew up and our families went their separate ways. We ran into each other in high school, and we've been together ever since. We've been hanging out together for 38 years. I wouldn't have it any other way."

For that, he deserves his own "Hey, Baby" hat, SpongeBob Square Pants T-shirt, and goofy glasses.