DARRELL RUSSELL: A FRIEND HELPS US REMEMBER, A SPORT IMPROVES ITSELF 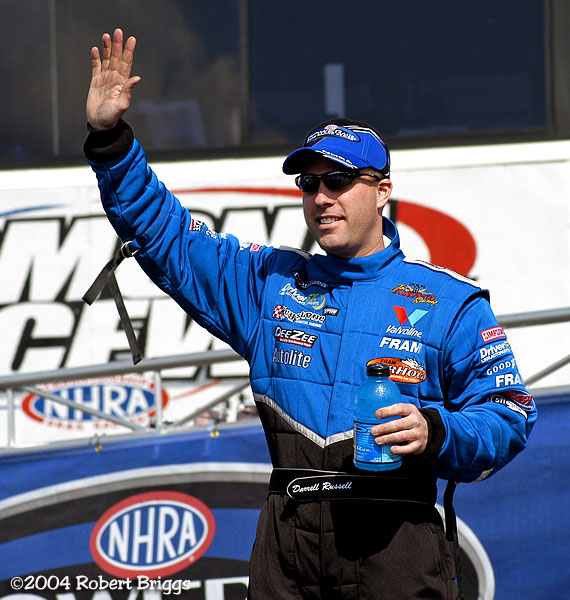 popped loose from Rubens Barrichello's car and struck him in the helmet as he was traveling about 170 mph in qualifying for the Hungarian Grand Prix. That incident happened six days after Henry Surtees died from injuries in an accident at a Formula Two race at England's Brands Hatch course. Surtees was struck on the head by a wheel that had come off another car.

For drag racing, the alarm sounded six years ago -- Sunday, June 27, 2004, at Gateway International Raceway near St. Louis, with the death of Top Fuel racer Darrell Russell. Cut down in his prime, his life blunted by a broken piece of his dragster, Russell died so suddenly and so incongruously from the way he lived.

Always smiling, always unflappable, Russell was the epitome of happiness. He genuinely was joyful, and that radiated from him. No one would have guessed such an alarmingly violent, ugly act ever would be associated with the polite, handsome, clean-cut Texan. This was the same unassuming man who in 2001 capped his acceptance of the Auto Club Road to the Future Award by saying, "I love you, Julie" to his wife in a boyishly innocent touch of sweetness.

But from his horror came some salvation. From his tragedy came the titanium shield that protects Top Fuel and Funny Car drivers, as well as a renewed diligence about tire and wheel safety.

Increased focus on the rear wing led the NHRA last October to mandate that all Top Fuel dragsters to be outfitted with a cable wrapped around the rear wing main element that will deploy the parachutes automatically in case the rear wing becomes separated from its supports.

Rob Geiger, one of Russell's best friends and a journalist/public relations representative with more than a decade of drag-racing experience, marveled on the eve of this weekend's visit to St. Louis for the AAA Insurance NHRA Midwest Nationals at the results.

"The titanium shield  -- it seems so obvious now, doesn't it?" Geiger said. "We never thought about stuff coming from behind the driver and hitting him."

Perhaps Don Garlits often has been amazed, too, thinking how obvious the rear-engine dragster was for safety's sake. It has been said -- and lamented, 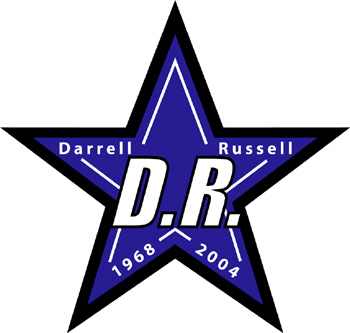 for no one's son or daughter deserves to be sacrificed -- that the racing rule book has been written in blood.

But as Geiger noted, "your mind doesn't even think that way" until something inexplicable happens. Calling Russell's accident "a weird, little, fluky thing," he recognized the NHRA for reacting quickly to protect racers even more. "You do have to credit the NHRA with their safety stuff. They've always been good about that," he said.

"I still haven't seen the wreck, other than when it happened and I was at the top end. I never watched the video of it. I've heard what other people have told me, about the way that twisted around and the pieces that came forward," Geiger said. "So definitely people learned some stuff from that."

But, as with the stunningly horrible deaths of Eric Medlen and Scott Kalitta after Russell's (and Blaine Johnson's at Indianapolis before them all) -- and again with Antron Brown's accident at Phoenix this February that resulted in the death of a spectator in the pits -- it's impossible to anticipate what might happen.

Its something Russell understood.

Said Geiger, "Fans are always curious about that. 'Do you ever get scared?' is one of the questions drivers get asked a lot. Darrell's answer to that was always the same: 'Bad things can happen at 300 miles an hour.' It's something that drivers realize. That's got to have a translation of: You can die. You're putting yourself at peril going 300 miles an hour. It can happen. We've seen it."

And, as devastating as it was, Russell's wreck was a bit like the one at the Daytona 500 that killed Dale Earnhardt. We have seen wrecks more spectacularly vicious. Same for Jovy Marcello's fatal crash in practice for the 1992 Indianapolis 500. But those deadly basal skull fractures (which also claimed the lives of racers Adam Petty, Kenny Irwin Jr., and Neil Bonnett, among others) were the catalyst for development and production of the HANS Device. According to racing safety engineer Tom Gideon, it "prevents the whipping motion of the head, and then prevents the centrifugal force in the neck."

NHRA tightened its rules on restraint systems, mandating a seven-point driver harness in 2007.

"That part of it, when you start overanalyzing it, that's when it gets tough for me," Geiger said.

That's only natural. Safety contributions might be the best Russell's family and friends can cling to now -- that and, of course, the unforgettable memories of a contented and kind young man.

Funny Car veteran Del Worsham said back in 2004, "Darrell was everything you'd ever want your own brother, son, or good friend to be."

Top Fuel driver David Baca said in Russell, "both the man and the racer, we lost an ambassador, a poster boy for NHRA drag racing, and my friend. He was the kindest, nicest person both on the track and off. In all my years of knowing Darrell, both in competition and away from the track, I never once heard Darrell say anything negative about anybody or anything. Every time I picture Darrell, all I see is teeth. All you saw was his smile. A good old Texas, down-home gentleman, and gentle man. Handsome and wholesome. A winner on the track who was just now developing into a superstar."

It's no wonder Russell's funeral procession reached Klein Cemetery on Texas Highway 249 at Pinehurst before everyone had left the service at the First Baptist Church in neighboring Tomball, near Houston.

After the formal good-byes, the grieving doesn't stop for family and close friends. And so it was for Geiger. 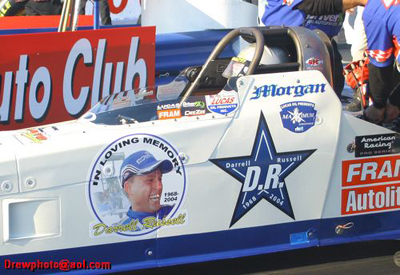 He interacted with both Medlen and Scott Kalitta and reminisced how ironic it was that both had different personalities from Russell's and from each other's but that bpth were Russell's friends; "Scott kind of in a mentor capacity and Eric more like a couple of cowboys who talk to each other." Said Geiger, "There's some weird synergy there, isn't there?"

But he has discovered an eerily familiar Russell-esque personality in Funny Car sophomore Matt Hagan, of Don Schumacher Racing.

"I went up to Matt Hagan earlier this year," Geiger said, "and I said, 'The journalism side of me -- I've got to apologize to you. I can't seem to bring myself to come and talk to you. And I talk to every driver out here. You remind me so much of Darrell in so many ways -- just like his mannerisms and his smile, his general look. I feel like I short-changed you as a journalist, because I just had this weird feeling about it.'

"It almost raises the hair on the back of your neck sometimes," Geiger said, "and the fact that he's a cowboy, too, runs that cattle ranch -- " he said. He told Hagan at the recent O'Reilly Spring Nationals at Houston Raceway Park, "I know you didn't know Darrell and you might not even remember. But I've avoided you because I feel weird, like you're some kind of connection to Darrell."

He said that what struck him about Hagan, who raises Angus cattle on his farm near Christiansburg, Va., was his "easy, big smile -- that kind of temperament that country-cowboy kind of guys have, where they don't get super-duper excited about stuff . . . they're just kind of laid back and easygoing. There's just a lot of similarities about those guys."

Hagan, who right here that weekend went on to win the Funny Car trophy -- his first in NHRA competition -- said, "I hope that's a good thing! I hope you remember the good parts."

That Darrell Russell Moment grabbed Geiger. "Then after I told him that, he turned around and won the race," he said. He told Hagan, " Isn't that weird that we talked about Darrell and you won it here in Houston, where this is Darrell's track? You can sense Darrell around here.

"That's when you start knowing there are some powers beyond our control, pulling the strings or something. It was kind of neat," Geiger said.

Even though the race dates at Madison, Ill., have changed from late June to April/May this year, those who remember and knew Russell still have that flash back when they return to Gateway.

Geiger said he recalls thinking initially of the wreck, "Oh, man, we just wadded up a new car that had worked so well and won the last race and we were No. 1 qualifier at St. Louis. This sucks. We've got a brand-new chassis that was working so good and now we've just wrecked it."

When he arrived at the spot where Russell's dragster stopped, he began to realize the gravity of the situation. He saw Russell unconscious and saw that "Doc Brickey (the late Dan Brickey) was being so particular with what he was doing." That's when, he said, that he knew "Something big is wrong here. As the seconds tick by, you know this isn't good.
We didn't know that (immediately)."

So, Geiger said, "There's no question it's an odd place for me to go. I do tend to feel a little antsy and sad when I'm there. When I look down the St. Louis track and I look at that spot on the track that me and the team and the medical people all got together, that's what I don't like. Those are the memories you don't want to have."

In fairness, St. Louis isn't the only reminder of Russell for Geiger.

"It's funny, because the memories of Darrell aren't just in St. Louis," he said. "I can go by a little pizza shop in Englishtown or a place in Topeka where we had a laugh or dinner one night and it makes me think of him. I don't know that I'll ever forget Darrell.

"He made such a positive impact on my life in so many different ways -- as a friend, most of all. We shared a lot of good times out there, so it's easy to think of him and smile," said Geiger, who penned the book "Broad Smiles, Quarter-Miles" about the Hockley, Texas, cowboy who lassoed himself a top-tier drag-racing ride with NHRA legend Joe Amato.

"I just hope he's in a better place with Eric (Medlen) and Scott (Kalitta) and all the other drag racers who have passed away."

He said he keeps in touch regularly with Russell's young widow, Julie. "She's doing great. She's good," he said. "She's moving of out the house that she and Darrell built, moving farther out into the country so that she can have more animals, which is right up her alley. So she's in the process of selling the house and getting one built farther outside of Houston. Her parents have some land. That's perfect for her. She takes care of some people's animals. She just likes being around animals." 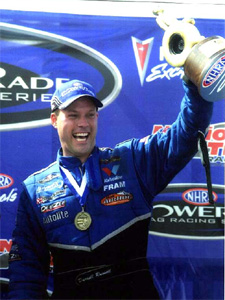 Said Amato in the days after Russell's accident, "He was a rising star and had all the qualities of a champion. No words can describe in God's world what's fair."

That's true. The scene at Klein Cemetery evoked the words of poet A.E. Housman in "To An Athlete Dying Young": "The time you won your town the race we chaired you through the market-place. Man and boy stood cheering by, and home we brought you shoulder-high. Today, the road all runners come. Shoulder-high we bring you home and set you at your threshold down, townsman of a stiller town."

But amid the unfairness, like some anthem of Darrell Russell, drift the words from Rod Stewart's ballad "Forever Young":