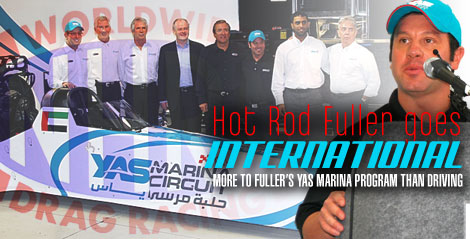 More than five centuries ago, explorers brave, bold, and battle-ready sailed into uncharted seas and lands in search of silk, spices, and “The New World.” They had no idea what they would discover, but the quest for a conquest was overwhelming.

Today a 5-foot-5 former football player with a Masters degree from the University of Arkansas, a 39-year-old man who loves shopping and exotic cars when he isn't buffing up at the gym, is embarking on a grand expedition in the other direction. Just as on their journeys Christopher Columbus carried the flag of Spain's King Ferdinand to the Western world, “Hot Rod” Fuller will be representing the National Hot Rod Association and “the nation of drag racing” in Abu Dhabi, the United Arab Emirates. 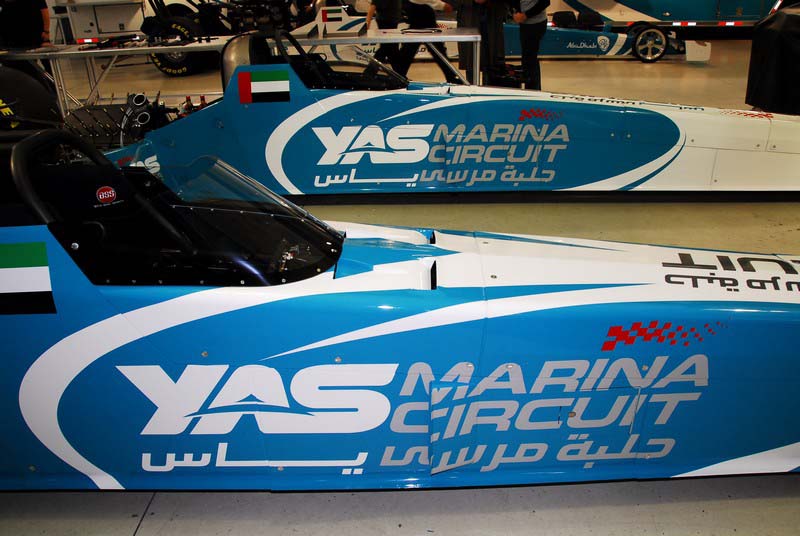 More than five centuries ago, explorers brave, bold, and battle-ready sailed into uncharted seas and lands in search of silk, spices, and “The New World.” They had no idea what they would discover, but the quest for a conquest was overwhelming. 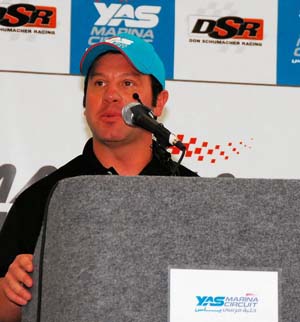 Today a 5-foot-5 former football player with a Masters degree from the University of Arkansas, a 39-year-old man who loves shopping and exotic cars when he isn't buffing up at the gym, is embarking on a grand expedition in the other direction. Just as on their journeys Christopher Columbus carried the flag of Spain's King Ferdinand to the Western world, “Hot Rod” Fuller will be representing the National Hot Rod Association and “the nation of drag racing” in Abu Dhabi, the United Arab Emirates.

Not seeking spices, textiles, or the fountain of youth, Fuller and fellow Top Fuel racer Tommy Johnson Jr. are navigating new waters and surveying lands foreign to drag racers. Call it the Nitromethane Trail around the globe, by air and not by wooden ship. They'll be among the first to occupy this Middle East “settlement” called Yas Marina Circuit, arguably the most expensive, most gleaming, most beautiful, most intriguing auto-racing facility in the world.

Newcomers to a strange land with unfamiliar customs, Fuller and Johnson will be The Foreigners and their cars “The Imports.” Said Fuller, “Right now they race what we'd call imports. We're 'the imports' now. The Top Fuel is going to be 'the imports' now.”

But Fuller's compass has him headed right for the target that Don Schumacher, the architect of this 21st-Century adventure, has determined. And the route couldn't have been more circuitous for Fuller.

He has weathered his team's economic struggles, ownership changes, mutinies, controversies, and ultimate decisions that left him sitting on the sidelines more than once, despite evidence that he has the skills to vie for a Top Fuel title. In his personal life, he has faced fears with his mother's (successful) liver transplant, and he has survived broken relationships. But this opportunity with Yas Marina Circuit -- for which he will be a Top Fuel driver, developer of the United Arab Emirates' drag-racing program, and drag-racing school instructor -- has given him fresh purpose.

“I've matured a lot in the last year,” Fuller said. “It definitely humbled me, not that I ever got a big-head or anything. But there were things I definitely took for granted, and when you lose all that stuff, it kind of puts things in perspective. If you looked at me and all the stuff that happened to me in the last five or six years, there's been a lot of adversity in my life. But a lot of great things happened, too.”

The notion of taking something totally American and preaching it around the globe didn't strike Fuller at first. Perhaps because it all happened so fast, he said he never approached it in those terms.

“If you ask me today if I could run a full (traditional 23-race NHRA) schedule or be able to do this, I would say I would turn down a full schedule and do this, because I think it's a greater opportunity for me,” Fuller said. “A lot of people over there don't know who John Force is or Tony Schumacher. But when I get over there and race, they're going to know who I am. I'm not only going to be known in the United States. I'm going to be known all throughout the globe.” 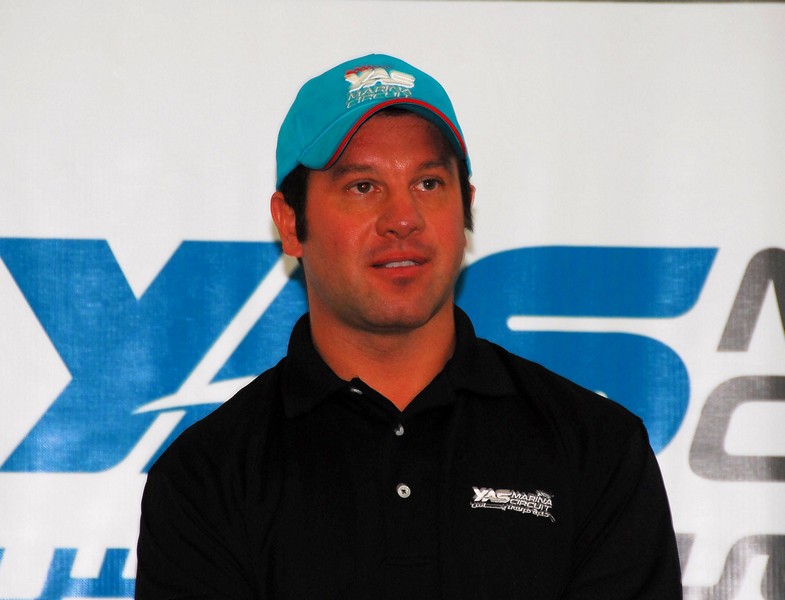 Hot Rod Fuller said he truly considers it an honor to be Yas Marina Circuit's multifaceted “Everything Guy,” evangelizing, if you will, the gospel of drag racing.

“I'm going to be running the racing school that we have planned and helping them with their weekly bracket-racing programs.”

CLICK HERE TO READ THE FULL ARTICLE
Fuller, who officially is a full-time employee of Yas Marina Circuit while Johnson Jr. is a Don Schumacher Racing employee, said DSR's and NHRA's expansion already has piqued interest in this sport which has struggled during America's stumbling economy.

“I've already had sponsors contact me, Caterpillar being one of them -- they're global companies and they're excited about this,” Fuller said. “NASCAR doesn't go beyond the borders of the Unites States, and here we're going to be traveling to all these trick countries. On the business side of it, it really puts NHRA in the forefront. There's not a lot of American-based racing organizations that go worldwide. So we're going to be a leader in that.

“I think that's really going to help our sport out, especially at a time when, in America, the economy's so bad and sponsors are dropping out left and right,” he said. “I think it's very, very proactive thinking on NHRA's part and Don Schumacher's part and on all the rest of the racers' to see this expansion and to go global.”

[Fuller said reaching out to Canada, Japan, and Brazil is what saved the Indy Racing League's IZOD IndyCar Series. “Growing up, I was an IndyCar fan,” he said. “I didn't want to drag race. I didn't want to run NASCAR. I wanted to race IndyCar. I wanted to be like Danny Sullivan and Rick Mears and those guys. IndyCar lost me when I had nobody to cheer for on a national level, no American drivers. You could probably count on one hand the American drivers who run in the series. I think that's what killed the sport. If it wasn't for IndyCar's global expansion, IndyCar would have died.]

So while Sarah Palin is “Going Rogue,” the music industry is going Gaga, and GoDaddy is going Danica-mad, drag racing is going global in an even bigger way than ever. And with racing in America being one of the goals of Yas Marina Circuit-trained drivers, Fuller said he expects this wave to wash back from the opposite side of the globe to the United States.

“I think the goal of Yas Marina Circuit and the whole European and Australian (drag-racing communities) is to put a whole race series together after our season is over here and get paid to go over there -- not just get paid to win but also run for a huge purse over there -- let's say a million dollars to win the championship,” he said. “I guarantee you that if they did that and when we establish that, it'll be pretty cool. It'll be drivers from the U.S., Australia, Europe, and the Middle East fighting it out to see who really is the world champion.”

WHEN IN THE UAE … 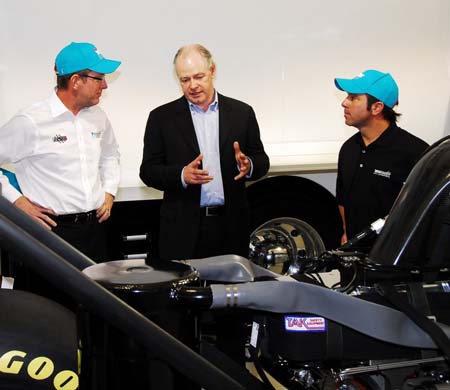 Misconceptions abound, Fuller indicated, when it comes to American racing organizations such as the NHRA and DSR doing business with Middle East-based companies.

“A lot of us Americans are very ... uh ... I'm trying to think of the proper, polite word to say it ... We're almost brainwashed in the sense that we only hear what we hear on the news, and the news only talks about the bad stuff and only focuses on a few bad circumstances,” Fuller said. “It almost generalizes it, makes people think that's what the Middle East is and what it’s about. And it's not. That's a very, very small portion of what goes on.

“Where we're going is the melting pot of the globe. There are people from every culture,” he said. “I've talked to Americans who have been over there, and they kind of laugh at how people perceive the Middle East and what people think of us over there. Probably one of the best about this, too, is I'll be able to convey, on my blogs and my Facebook and through you guys and media channels, of how cool it is and some of my experiences, what I'm seeing, and what's going on over there.”

He said his knowledge of United Arab Emirates culture was just a mouse-click away.

“You can pretty much find out everything you want on the Internet nowadays. The thing about Abu Dhabi, where I'll be living, is that Abu Dhabi is like the 'new Las Vegas.' The only thing they don't do is gamble,” said Fuller, who has made his home for the past few years in the Las Vegas suburb Summerlin, Nev. “The way everything is built and how modern everything is, it's really comparable to Las Vegas.

“[In] that whole region, the majority of the population are foreigners: Americans and English and Irish and German and Australian, the melting pot of the globe. It's not like I'm going to be a minority there,” he said. “There are a lot of people who are going to want to learn from me about our culture. And it'll be a great opportunity not just to promote drag racing but to learn about their culture.”

He said he and Johnson are just what Yas Marina Circuit was looking for, “We fit that bill well, because we are established and matured. We're not the young bucks who want to go out and party. Over there, that probably wouldn't be a great thing. That's one of the reasons why they picked me. I don't have a wife. I don't have kids. I don't have pets. I don't have nothin' to hold me back here.”

‘SOMETHING ABOUT A LOT OF PRESSURE’

He has nothing holding him back in Abu Dhabi, either.

No, clearly Hot Rod Fuller wants to seize this opportunity and break free from any labels or limitations. He wants to show the world, literally, what he can do.

“It all played out for the best for me. I'm glad I was patient,” he said. “I did get offered opportunities that just weren't what I needed to do or what I wanted to do. But one of the things I'm grateful for is winning a bunch of races and being successful so that I could be a little more selective than if I never had won any race.

“I consider myself a championship-caliber driver. I knew deep-down that I did what it took to win a championship,” Fuller said. “There's something about a lot of pressure going over there (to the UAE) and running on a brand-new racetrack and having to be able to perform.”

Unlike ancient explorers, he won't have to battle hostile natives, disease, greed, clashes of culture, unbearably harsh weather, deprivation of resources, or a frightening wilderness. Hot Rod Fuller is well-prepared and ready, in NHRA President Tom Compton's favorite words, “take the sport of drag racing to the next level."