Over the course of the next two weeks, Torco's CompetitionPlus.com will feature the world champions of both the NHRA and IHRA. Senior writer Susan Wade delves into the behind-the-scenes stories that made each one of these champions the best in the their respective games during the 2006 season. This installment features the IHRA nitro champions - Clay Millican and Dale Creasy, Jr.

Millican Reminded That Titles Are Tough To Earn 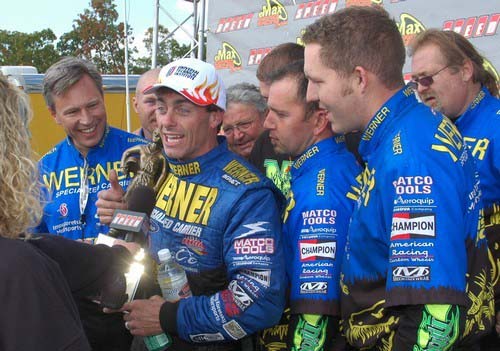 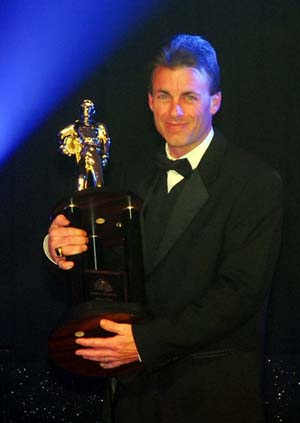 "It has been a building year for our team," the Werner Enterprises/Kenny Koretsky Motorsports Dragster driver said after recording his 50th International Hot Rod Association event victory to cap his sixth consecutive Top Fuel championship.

Building year? How can that be? In all of drag racing, only National Hot Rod Association superstar John Force has done better, with 10 straight Funny Car series titles.

Even Pro Stock icon Bob Glidden (incidentally the 1976 IHRA champ) saw only (only!) five of his 10 NHRA crowns come in succession. In the IHRA ranks, both Scotty Cannon (Pro Modified) and Rickie Smith (Pro Stock) managed four straight. Anthony Bertozzi claimed six straight IHRA Super Stock championships in the sportsman ranks, but no one but Force has done it at the pro level.

The fact that Millican and his team considered 2006 a building year meant they were focused on the future rather than the past. They wanted to move forward and blaze trails, not rest on the ground they had conquered.

In doing so, Millican and crew chief Mike Kloeber proved their prowess, but they brought drag-racing back down to earth.

"Expectations are so high that they really aren't realistic," Millican said. "We didn't dominate, but you can't always dominate."

No, you can't, not when you have a new version of Goodyear's drag slicks and one
persistent rival in Doug Foley, for starters. 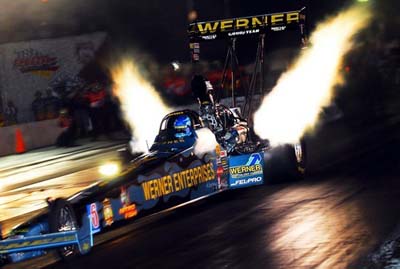 Foley sent notice to Millican in the season premiere at San Antonio that the rest of the Top Fuel class wasn't going to concede an inevitable championship to the popular driver from Drummonds, Tennessee. He beat Millican in the final there in the Lone Star State, and that was just the start of a Texas-sized task for the defending champ.

Millican won just once in the first eight races, not until the fourth race of the year. Cory McClenathan, Bobby Lagana, T.J. Zizzo, Andrew Cowin, and Hillary Will combined with Foley to limit Millican's victories to just four (at Edmonton, Alberta; Cayuga, Ontario; Budds Creek, Maryland; and Rockingham, North Carolina).

Though Foley and Millican are, no pun intended, fast friends off the track, Foley cut Millican no slack. At Cayuga, Foley was primed to meet him in the finals, like he had at San Antonio. He was No. 1 qualifier that day, and with a victory, he could have had Millican on the ropes with just two more events remaining.

But Foley met the same fate that Bruce Litton had in the previous race, at Epping, New Hampshire. He crashed. He rode out a sickening wreck that left him with a concussion, broken left leg and ankle, separated right shoulder, broken tooth, and various cuts and bruises. Millican resumed the points lead, wrapped up the championship at the next race, and knew that he had weathered a brutal season. 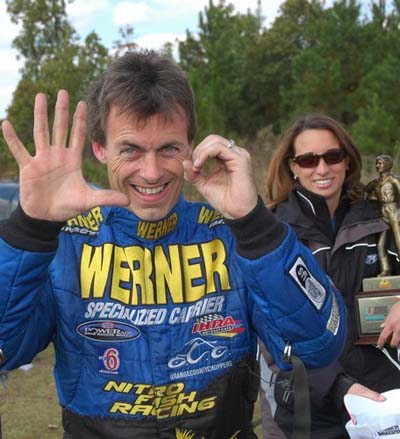 And how did Millican allow Foley such a foothold? Why did he have a slow start?

Kloeber addressed the early-season inconsistency and the tire-smoking performances that simply were "un-Millican-ish." Said the crew chief, "We're looking toward the future, and eventually this is the tire everybody is going to have to run. Toward the end of the year, we were starting to get the tire to behave for us."

Said Kloeber, one of drag racing's most intense and most relentless wrench-twisters, "I was on a quest this year. I went through more set-up and basic combination changes this year than I will probably go through the rest of my life. We mixed up all the best from all our different changes this year with how we've run the car the last five years . . . and that's what's made the car turn around."

But the end of the season was bittersweet. Foley attended the final race, using a wheelchair and testifying not only to his grittiness but to the truth that life is fragile.

So, too, for Millican were sponsorships. Werner Enterprises, his primary sponsor for seven years, announced it is leaving drag racing. Said Millican, "It's a tough, tough thing to see them leave. We absolutely appreciate everything they did for this race team. We will always remain friends."

He and Foley will, too. They will race another day and for another championship. But this Championship No. 6 was no small feat. Even team owner Kenny Koretsky, who stirs a business whirlwind wherever he goes and has earned the nickname "Captain Chaos," felt the sense of relief.

"I'm very, very proud of Mike Kloeber, Clay, and the whole team for not losing their composure during this tough season," he said. "It was a battle to the end -- and I'm glad we won." 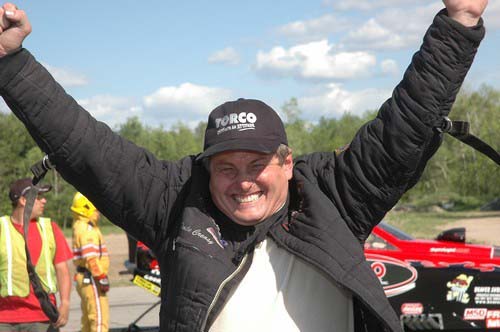 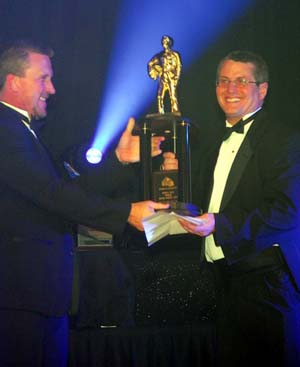 The continuous-loop warning played inside the head of points leader Dale Creasy Jr. as he prepared to race closest challenger Jack Wyatt in the Nitro Funny Car final round of the final race of the season.

Creasy, in the Torco-sponsored Chevy Monte Carlo, had a 25-point lead. That sounded wonderful, but he knew it wasn't enough.

He knew the door was open a crack, and he knew Wyatt was just hungry enough and dogged enough to wedge his foot in and open it all the way. After all, Wyatt had tried for so long with so little, like Creasy had, and had experienced all the frustration Creasy had as a smart driver with lots of heart and little funding. Furthermore, at stake was more than the race victory. The championship was on the line in the class freshly reinstated for the first time since 1992.

Oh, Creasy had enjoyed the battle. When it looked like Wyatt might have to ditch his quest for the championship because he had blown his last available motor, Creasy loaned him an engine block and set of cylinder heads so he could continue. Thanks to Creasy, Wyatt pulled within 56 points of the lead. Would it turn out to be a case of hiring his own assassin? "I wouldn't have it any other way," Creasy said.

A Creasy loss that moment in Rockingham combined with a black-flag penalty was Wyatt's only chance to take the championship. "If we did everything right we could still lose the championship," Wyatt said. Creasy knew that, but that was no comfort.

"I knew if we didn't make a mistake, we were going to win whether we lost or won the race," Creasy said. "I was so worried about oiling that track down." 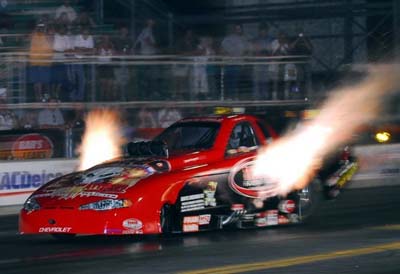 He didn't. Despite red-lighting and idling down the track while Wyatt zipped to his second victory at Rockingham Dragway, Creasy secured his first championship -- a triumphant end to a season that had brought him the first three victories of his career, all north of the border (at Edmonton in Alberta, and Grand Bend and Cayuga, in Ontario).

Talent, luck, a skilled crew, a cooperative car . . . Creasy had it all this season. After 20 years or so in the business, Dale Creasy Jr. -- known as "Peanut" to everyone -- finally was a champion. A champion. No one ever could take that away from him.

At first, he didn't seem to be transformed by his new status. He and his crew, under the direction of brother Steve Creasy and second-generation crew chief Allen Meyer, loaded the hauler as usual. Then along came a young boy, not unlike what Creasy probably looked like as a grade-schooler, rolling a discarded drag slick. When Creasy signed his name and wrote "2006 Champion" after it, that's when it sank in.

"That was kind of neat," Creasy said afterward. "I guess I'll have to get used to that."

The sentimental favorite even received kudos from Wyatt. "This was a great way to end the season," the series runner-up said. "Dale Creasy and the Creasy Family Racing Team deserve this championship, and they are going to be great representatives for IHRA." 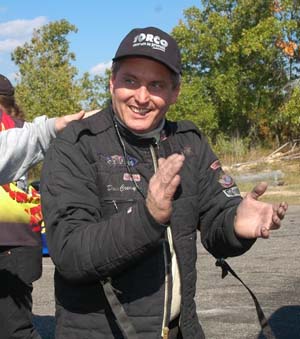 Creasy made the record books for another reason. His margin of victory over Wyatt was just five points, the closest championship in IHRA history. That trumped Paul Romine's 2000 Top Fuel title that came with just seven points more than Clay Millican.

Creasy's list of folks who helped him along the way in general and this season in particular would stretch from the starting line to the shutdown area of a drag strip. For instance, Meyer's father Larry is a drag-racing pioneer who helped Cruz Pedregon win the NHRA Funny Car championship in 1992.

His biggest supporter, though, has to be sponsor Evan Knoll.

"I'm so proud of Evan for sticking with me," Creasy said. "He asked me last year if we're going to win the championship. I told him I'm going to try as hard as I can." Then, speaking for fellow privateers Vinnie Arcadi and Terry Haddock, Creasy said of Knoll, "He gave us an opportunity to race -- and not at a lower level. This is top-notch racing right now."

He said he and Arcadi, Haddock, and Wyatt, among others, have raced in NHRA and still could compete there, "but we'd be beating our heads against a wall."

Creasy said he thinks IHRA's fan base will do nothing but expand.

"I'd like to attribute it to Funny Cars coming back. People love Funny Cars," he said. "They're wild. They're a handful. You never know what they're going to do. They start a fire. They smoke."

Wyatt was right. Creasy wasted no time in being an enthusiastic representative for IHRA.