Over the course of the next two weeks, Torco's CompetitionPlus.com will feature the world champions of both the NHRA and IHRA. Senior writer Susan Wade delves into the behind-the-scenes stories that made each one of these champions the best in the their respective games during the 2006 season. 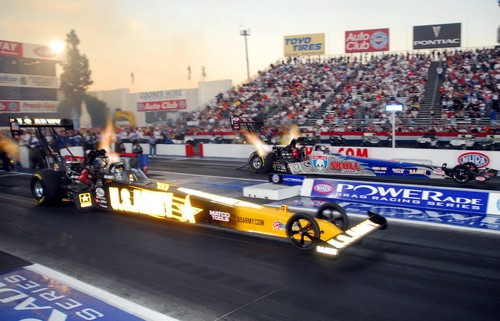 Army Dragster Driver Gets Third In Row, Fourth In All 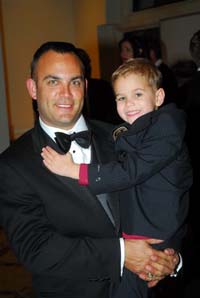 Tony Schumacher's desperate final-round flash -- that 4.428-second blur at 327.98 mph, the one that stunned points leader Doug Kalitta and gave Schumacher his third straight championship and fourth overall -- forever will be known simply as The Run.

It capped what undeniably was the greatest championship comeback in sanctioning-body history and punctuated a rally from what had looked destined to be Schumacher's worst series finish in this decade. In executing the nearly impossible task, the U.S. Army Dragster driver became only the fifth to earn three straight titles. He tied Top Fuel's Joe Amato (1990-92) and Pro Stock Motorcycle's Matt Hines (1997-99), Angelle Sampey (2000-02), and Andrew Hines (2004-06).

Schumacher rose from eighth place in June, making up a 336-point deficit by winning four times in seven final-round appearances since the race at St. Louis.

"That was a perfect run," Schumacher said. "There has never been a better run than that one. Maybe equal, I don't know. Never bigger.

"That was a perfect day," he said. Considering all the situations and parts that could have gone wrong to ruin his last-ditch effort, he said, "It was just perfect timing, perfect situation, perfect outcome. Awesome. 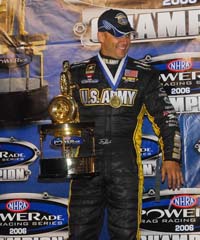 "That team is amazing. Period," he said of his U.S. Army Dragster crew members. "They're built for big moments like that."

Schumacher's national-record time of 4.428 seconds, which gave him the 20 bonus points he needed to claim the championship by 14 points, is tied for the second-quickest run in NHRA history. (As such, it automatically became the Auto Club Raceway at Pomona track record.) Ironically, the quickest pass belongs to Kalitta, with a 4.420-second pass from Joliet, Illinois, in May 2004. (Kalitta also owns the other 4.428-second elapsed time. He set it at Joliet in September 2003.)

Said Schumacher of his 4.428 E.T. ride, "My heart was pounding. I could hear it beating over the car [noise]," he said, adding that the dragster "was haulin' butt. It was over 280 [mph] at half-track. Everything was trying to move on my helmet."

In all the Schumacher jubilation, a bit lost besides Kalitta was Melanie Troxel, the driver who took him out in the semifinals and fell in the final round. She had led the standings the entire first half of the season and lost the lead to Kalitta in her hometown, Denver. Schumacher recognized his teammate Troxel and the key role she played in this championship.

"I can't tell you how great of a job she did driving today," he said that Sunday night. "There's a very good chance I'm sitting here holding the Powerade trophy because of what she did. That's a fact. Can't sugar-coat that. She went out and kicked his butt and did a great job. Kalitta sat silent on his golf cart at the top end of the track, watching the final-round results. And even Tony Schumacher, who had a gracious moment afterward with the man whose goal he stole, couldn't help but sympathize with the Mac Tools Dragster driver.

"I felt so bad. I love the guy," Schumacher said. "Of all the people to battle with, if I couldn't win it, I'd pray for him to win it. He's so deserving.

"Doug went out there and set out one of the most amazing driving records. Had he not done that, we would not need the record," Schumacher said.

But this sensational comeback was not without some, well . . . sensation. Just like the specter of steroid use cast a pall over the home-run performances of baseball sluggers Mark McGwire, Sammy Sosa, and Barry Bonds, and just like Roger Maris' Babe Ruth-surpassing home-run feat carried an asterisk for years, Schumacher's stunner has its baggage.

Schumacher said of his crew chief, "What can you say about Alan Johnson? He's simply the best crew chief and tuning mind ever, period. No one comes close. To pull off what he just did should end all discussion on the subject." 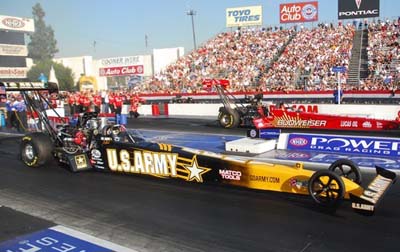 But it didn't. No one questions Johnson's ability -- just his awareness level when chief starter Rick Stewart, allegedly the ultimate track authority, signaled to him to shut down the Army Dragster before Saturday night's qualifying run because of an oil leak. Schumacher saw him but said he listens only to his crew chief. Johnson said he didn't see Stewart. In the end, NHRA fined Schumacher $20,000, a mere slap on the wrist according to many observers.

As it turned out, Schumacher wasn't disqualified or docked points for ignoring the rules. And although he had no chance to set the pivotal national record, he went out and did it the next day anyway. Was the burden on Johnson to acknowledge what the starter was doing, knowing he had an oil leak (which he said he repaired)? Was the burden on Schumacher to shut off the car, as he acknowledged that he saw the starter's gesture? Was it Stewart's duty to prevent Schumacher from running? Was it everybody's responsibility to consider Doug Kalitta's situation and how the incident affected him? Was it all those?

What it was was a shame that the incident detracted from a thrilling battle where every single point counted, an incident that detracted from the Schumacher crew's "Army Strong" example through thick and thin.

Just the same, Tony Schumacher's fourth Top Fuel championship will keep everyone talking about The Run. 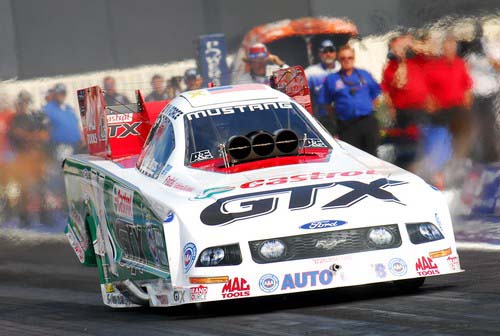 Years ago, John Force considered Cruz Pedregon a major thorn in his side.

Then it was Cruz's younger brother, Tony Pedregon, Force's own teammate.

Then Gary Scelzi switched from the Top Fuel class, jabbed at Force by good-naturedly calling him "Seabiscuit," made Force crazy counting point scenarios just like Cruz had 13 years before, and finally made him cry "Uncle!" on the last day of the 2005 season.

But for years, Ron Capps was the driver Force seemed to fear the most.

That's fear as in respect.

"He's a talented driver, a great interview, good for the sponsors, and just a great guy," Force told the San Bernardino Sun. "Capps will win a title in time, because you learn from the mistakes you make. And he doesn't make many mistakes."

Force made one critical error last year, when he lost the championship to Scelzi after leading with two races remaining. "I thought I couldn't lose. That was a mistake," he said. And it was one he promised himself never to make again.

Even so, the Castrol GTX Ford Mustang driver said, "If Ron wins, I will hug him until his eyes pop out. I have a soft spot in my heart for Cappsy. He deserves to win. He deserves that respect." 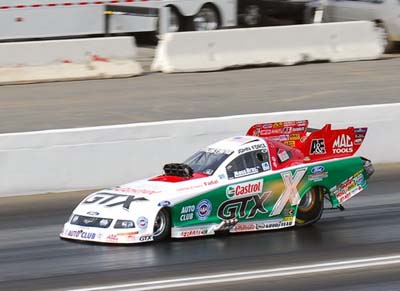 Capps was impressive, leading the standings for 15 straight events from February to August, then for two more later before surrendering the lead for good at Reading, Pennsylvania. He had a class-best five victories in eight final rounds. Still, it wasn't his turn yet.

But after Force clinched his record 14th Funny Car championship with his second-round triumph over Capps, he said, "In my heart today, [Capps] won the championship. I believe that Ron Capps won this championship. The only difference is that they give me the trophy and the check. I'm not trying to sugar-coat this. I believe Ron Capps won. That's in my heart. This is no bullshit from an old man that gets sentimental."

Although he genuinely recognized the disappointment Capps was feeling, Force said, "I've got a job to do, and that job is to win. If I don't, my sponsors will take my money and give it to somebody who wants to win -- like Capps.

"I'm honored to race against Ron Capps," he said. "The kid worked hard. I watched that kid's pain. I watched him puke. What he went through, I went through it, guys. I lived it. I've lived it, because it’s a gut-ache that tears you right down to the wire. I know Doug Kalitta’s sick [after his narrow Top Fuel miss]."

Robert Hight -- Force's son-in-law, teammate in the Auto Club Ford Mustang, and man he defeated in the semifinal -- finished second in points, 112 off Force's pace. Along with Eric Medlen, he helped the Force team finish 1-2-4 in the standings.

"I hate it for Robert and for Ron Capps, two kids who raced their hearts out. But they'll have some more chances. I'm 57 years old, and I'm not going to win forever. "I ain't got nothin' to jump up and down about because I'm the champ. I was already the champ," he said. "In about 60 days, we'll all be standing there with no points. And Capps will look at me and say, 'I'm going to kick your butt.' And it starts all over again."

But Force had another Don Schumacher Racing Funny Car driver besides Capps and Scelzi he should've been looking out for, too. Jack Beckman, in just his fifth Funny Car race, nearly ran the table in the Matco Tools Iron Eagle Dodge Charger by swiping the No.1 qualifying position and setting both ends of the national record (4.662 seconds and a speed of 333.66 mph). But he lost to Force in the final round.

The Pedregons, Capps, Hight, Beckman . . . No one could stop John Force, who by season's end had qualified for 392 consecutive races, extending a streak that began with the first event of the 1988 season.

Force and his team, with Austin Coil and Bernie Fedderly at the helm, remain the gold standard in Funny Car racing.

Ed "Ace" McCulloch, Capps' crew chief and a man who years ago used to whip Force regularly as a driver but one day yielded Force his first victory, said as much: "Force's operation is as good as it comes. We came up short."

Legendary Green Bay Packers football coach Vince Lombardi is a man Force counts as a hero. He has a shrine to Lombardi in his Yorba Linda, California, office, and he has read the coach's books. "He said in every book that winning is everything. But I believe if a man fights as hard as you and he doesn't win, I believe he's still won. I just don't agree with Vince Lombardi that winning's everything."

But for now, it's pretty darn satisfying.