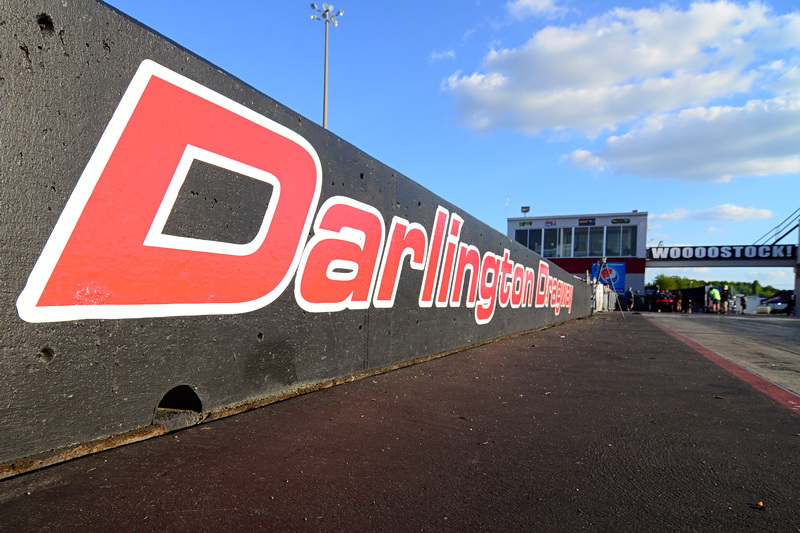 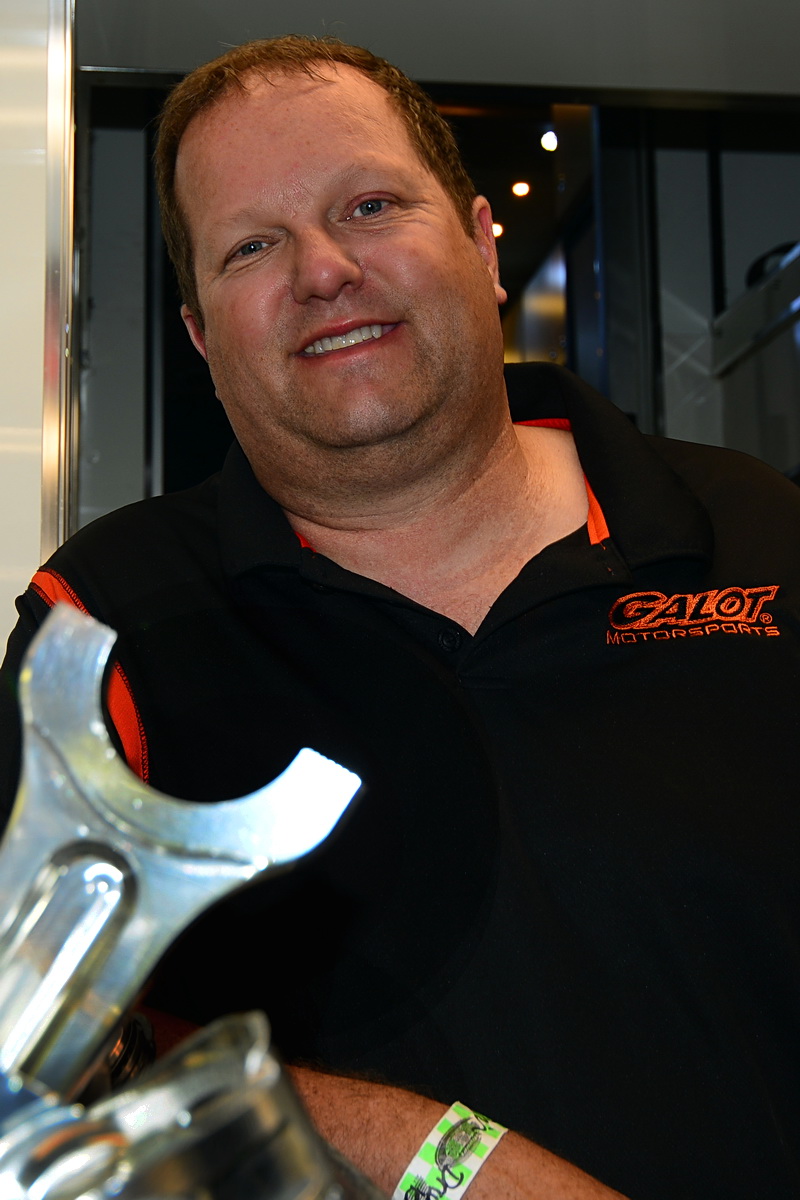 RIVENBARK READY TO GO RACING - Like most race teams, Kevin Rivenbark and his GALOT Motorsports crew headed into 2020 with eager anticipation and high hopes.

Then the global Coronavirus pandemic hit and everything shut down.

"Yeah, everything ground to a halt. But we're lucky because it don't affect us as much, 'cause we're not relying on sponsorship for each race. Of course we want sponsors, but our team owner, Mr. (Earl) Wells, he's our sponsor, so if we don't go race, we're just not spending his money," Rivenbark explained. "We just pretty much just shut down and when you're not going up and down the road you're not spending money.

"But, you know, guys like Rickie (Smith), he's not getting paid until he goes racing at certain places for whatever his contract says, right? And I mean, in Top Fuel and Funny Car I guess it's probably the same way. If you don't race, you don't get paid."

So for Rivenbark the toughest thing to deal with is the waiting--especially after an encouraging start.

"You know, we went to Bradenton first of the year in January and we went to Lights Out and stuff, so I mean we went to two races and got in some test sessions so I guess we got more into it than a lot of people. So I feel privileged that we got that in."

Regardless, after the unscheduled break, Rivenbark said firing up his ProCharger-equipped '69 Camaro for Wooostock 4 felt like the start to an all-new season.

"We didn't know for sure what was gonna' happen. I mean, we did a good test at GALOT a few weeks ago, but this is our first race since March. So I mean, it's been awhile, maybe even longer than we were off for the real off season normally," Rivenbark added.

"So we're ready and looking forward to getting back to racing, even if it is with a lot of restrictions. But still, I mean, we get to race, and that's got to help the industry. But no matter what I think the 2020 season is going to be marked a big X for a lot of people." 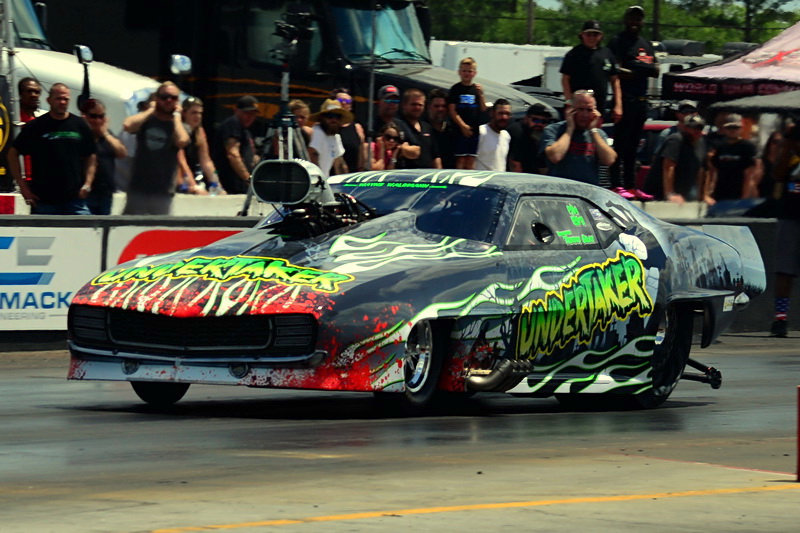 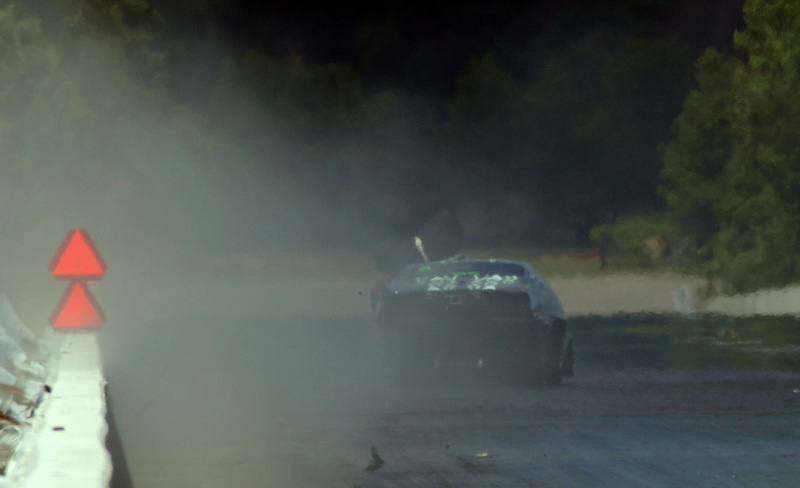 GRAY RECOVERING IN HOSPITAL AFTER 1ST-ROUND CRASH - After qualifying his blown '69 Camaro 12th with a 3.76 at 199.47 mph in the Noonan Pro Mod class at Wooostock 4, Tommy "Undertaker" Gray lined up beside James Beadling in a similar machine for round one of racing Saturday afternoon.

Gray and Beadling launched hard on a side-by-side run, but nearing the 330-foot cone, Gray's car shot across the track from the right lane behind Beadling to heavily sideswipe the left guardwall. It then crossed both lanes to strike the right guardwall past the quarter-mile mark, crossed the track once more and hit the left wall well into the shutdown area and then again recrossed the track to bounce off the right side one last time before slowly rolling to a stop against the left wall.

Track rescue workers were arriving on the scene even before Gray's car came to a halt. Wooostock promoter Keith Berry later said Gray was reported awake and aware, though complaining of significant left side body pain and a headache. Upon being transported to a local hospital, Gray was found to have seven broken ribs with surgery scheduled for Monday to reset them. Unconfirmed reports also suggest he suffered a concussion and possibly a broken left wrist. 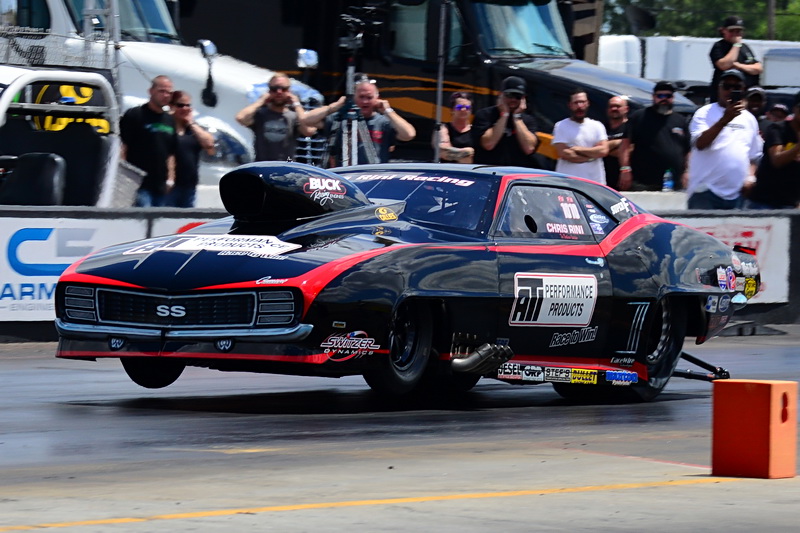 RINI WINS WOOOSTOCK AT DARLINGTON - Chris Rini turned out to be the lone big winner this weekend during promoter Keith Berry's 4th annual Wooostock doorslammer event. The event was cut short by dew settling in after midnight at historic Darlington Dragway with Radials vs. the World and X275 ready to enter the semi-finals. Full purses were split evenly for the remaining competitors in both classes.

"We ended up eighth so we had to race nine, so you know, on paper we had the tightest first round and it never got any easier from there," said Rini, the reigning Carolina Xtreme Pro Mod (CXPM) champ. "We were on a real tough side of the ladder but we got through it and we had a good car, good power, and we just made good runs all day."

Rini opened with a 3.74 at 200.62-mph pass over Steding, then followed up with a holeshot win over an uncharacteristically late Strickland in round two. A .032 leave by Rini in the right lane was enough to allow his 3.76 at 200.18 to beat Strickland's 3.72 by more than a hundredth.

Rini's first pair of elimination wins were highlighted by big mid-track wheelies, though, so he calmed down his ride for round three and improved to a 3.72 at 201.79 mph against Jeff Miller and his blown "Bumblebee" 2017 Camaro. 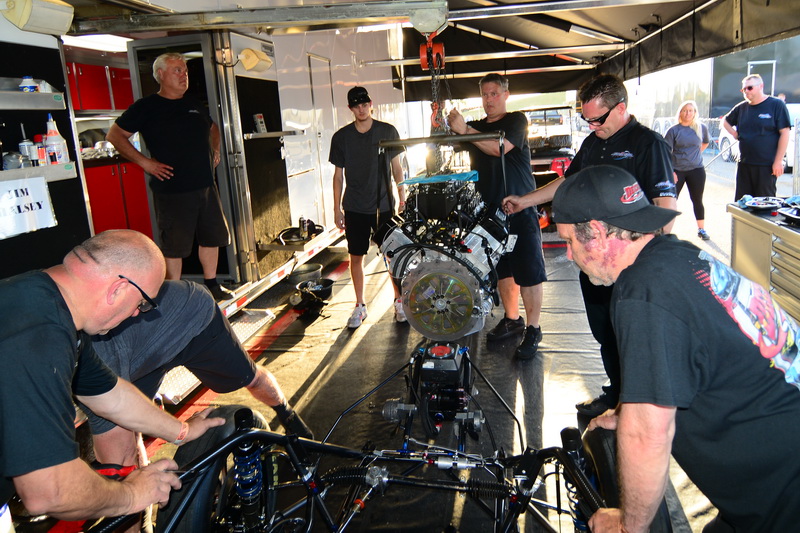 That set up a final showdown against Halsey, who steered his nitrous-fed '69 Camaro past Stan Shelton and doorslammer legend Rickie Smith before taking on third-place qualifier Randy Weatherford, where he lit up the Darlington scoreboards with an unreal 3.56 winning pass at just 203.71 mph.

"Yeah, I don't know what went wrong, but that time's not right," stated Halsey, who owns Cecil County Dragway in Maryland. "So that means he (Rini) will get lane choice based on a timing malfunction."

Unfortunately for Halsey, the pass also led to significant internal damage to his nitrous-fed engine, prompting a between-rounds swap by his Brandon Switzer-led crew. Regardless, Rini took nothing for granted.

"There's no comfort factor at all," he stressed. "I mean, Jim Halsey is one of the best of the best, obviously last year's PDRA world champion and he has Brandon Switzer tuning--just like I do--so i know he's good and he's got a great team all the way around. Bottom line, the final is going to be tough no matter what happens."

In a battle of champions for the Wooostock 4 win, Rini took a .020 starting-line advantage and never looked back, leading an eighth-mile later with another wheelstanding 3.65 effort at 203.80 over Halsey's 3.67 at 203.62 combo. 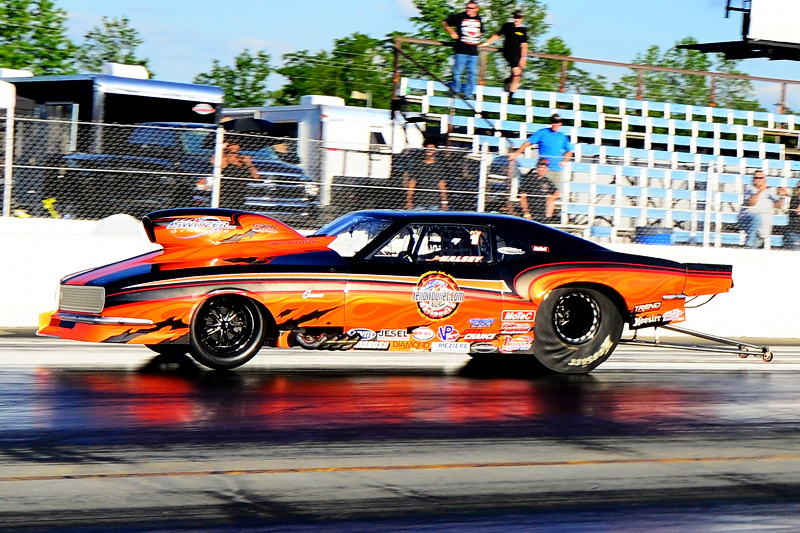 "Yeah, I knew it could be decided on the tree, so I rolled in there, got the motor cleared out and then I cleared my head as I was starting to roll into the beams," Rini recalled. "When it took off it was probably a little bit better than I expected it to be and then it came up to wheelie again through the middle and I was like, 'Oh yeah!' And it overcame that and really made a killer run. At the end of the run I saw the win light on the wall and I was just happy as can be."

It marked Rini's third-straight race win after scoring the final CXPM race of 2019 to cap off his championship run and the 2020 CXPM season opener, also at Darlington.

"You know, we're trying to run big numbers in not the best weather conditions. It's hot, it's humid, but the track was on point. I gotta' say, they prepped the track killer for that run," Rini said.

"You know, the cars are so good now, the teams are so good, the tracks are so good, and I mean, you can see it any on any given day, any one of these cars could win," he continued. "It's just a matter of putting together the best run that car could make under those specific conditions and then the driver doing the best he can to get off the start line first. And yeah, a little luck will always help, too." 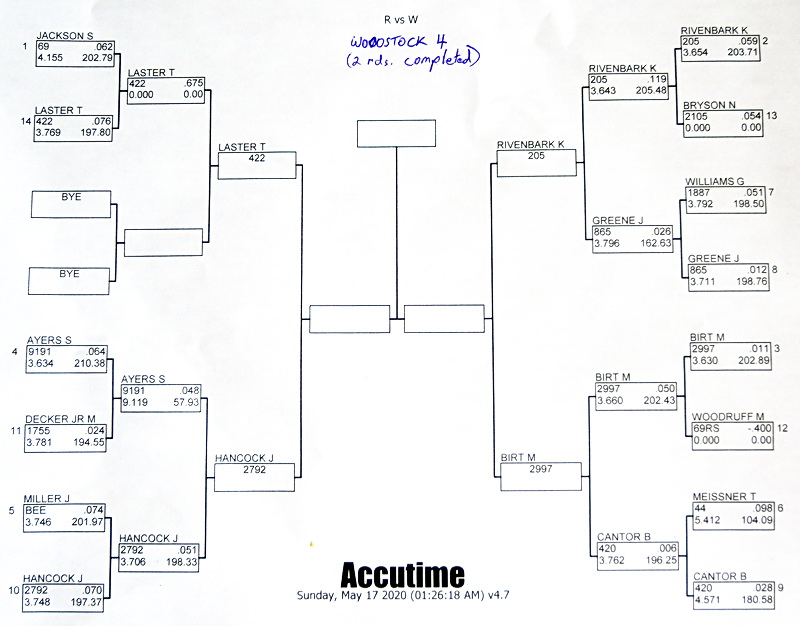 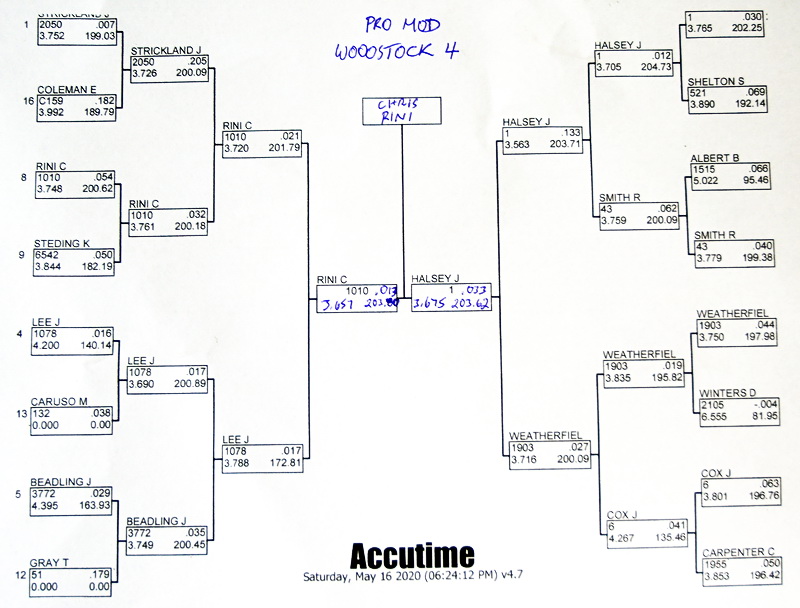 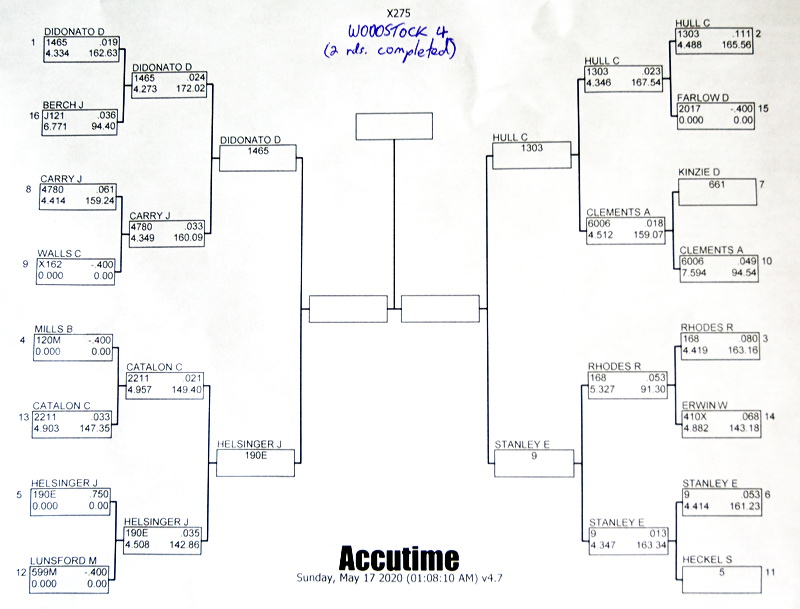 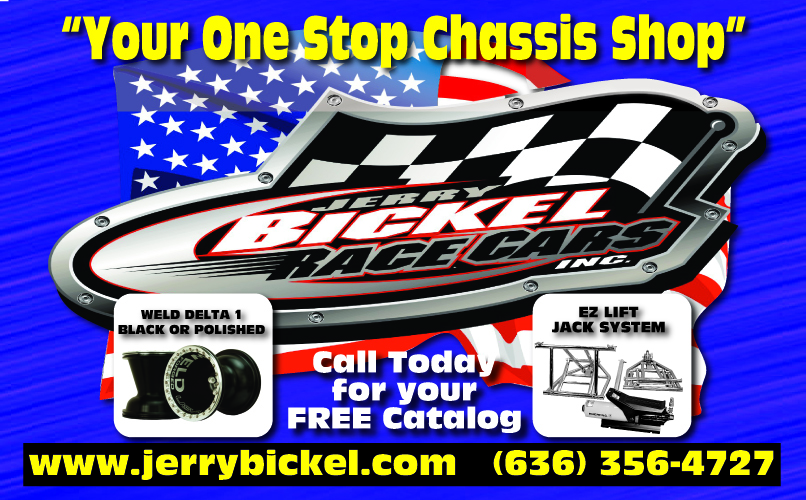 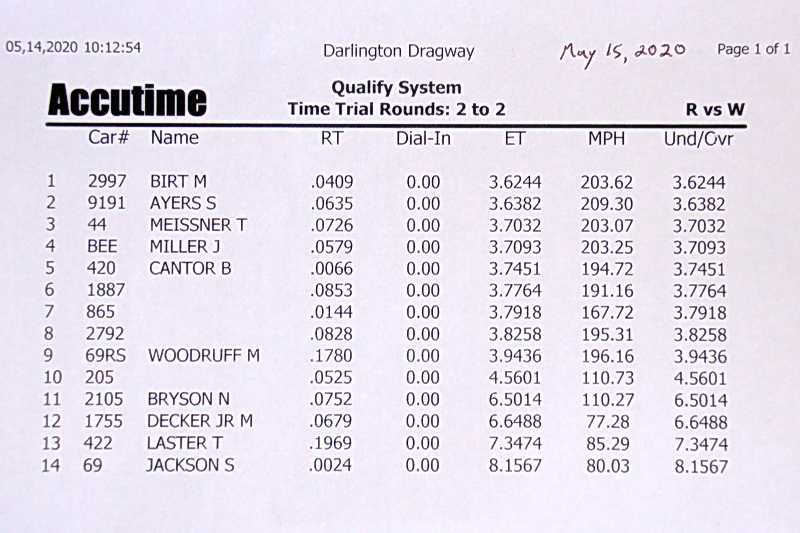 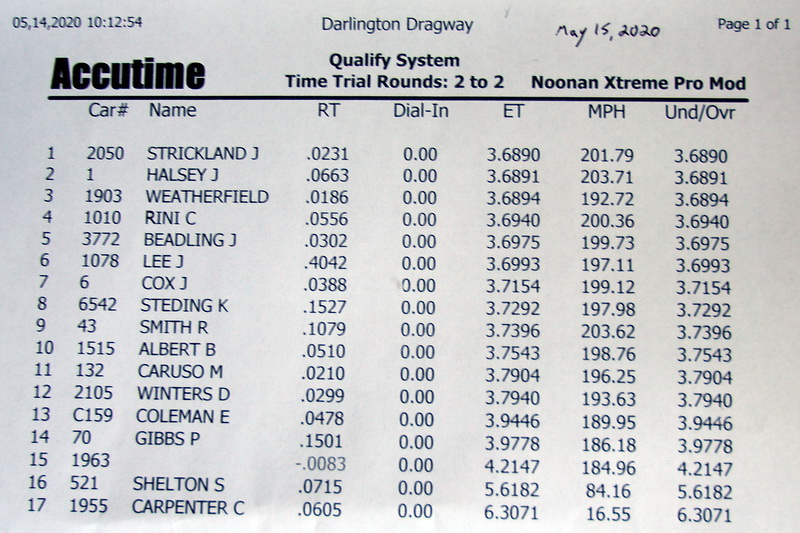 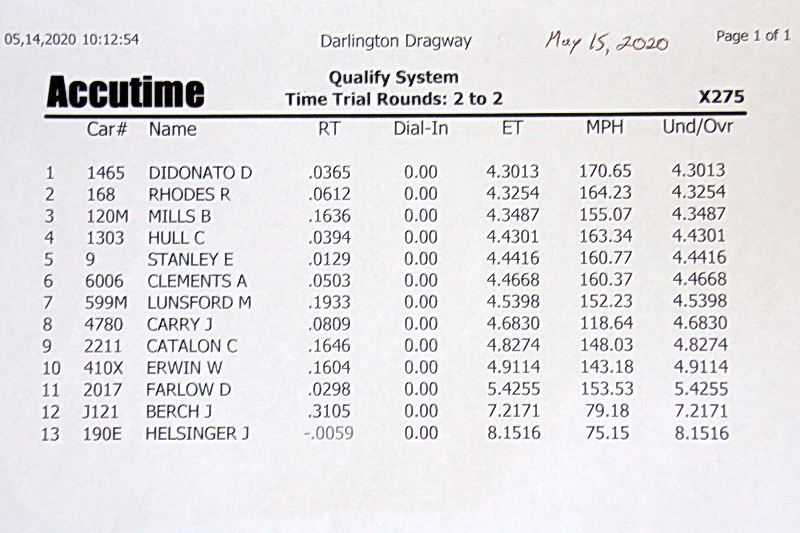 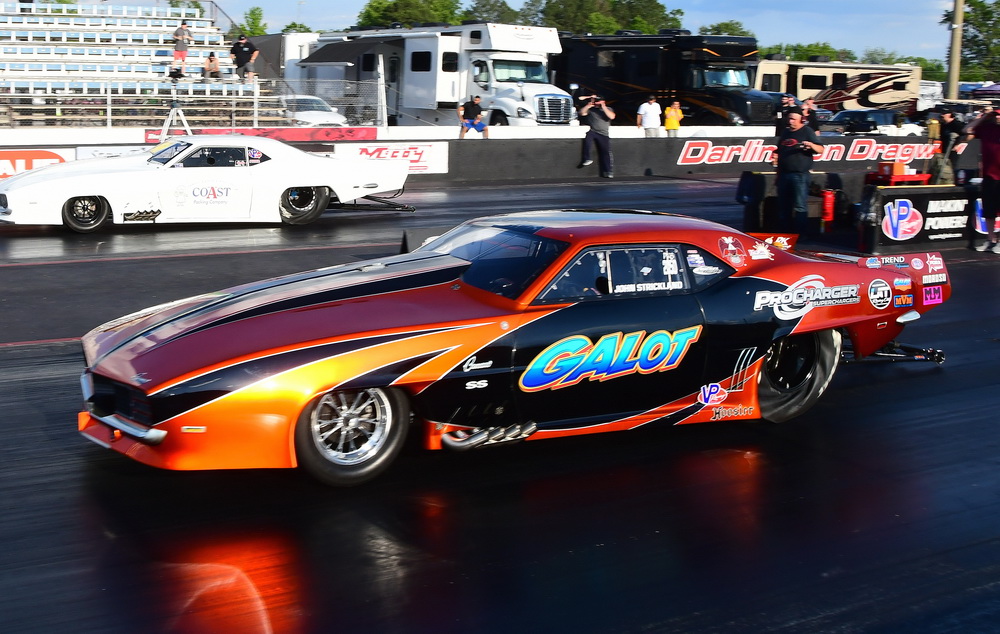 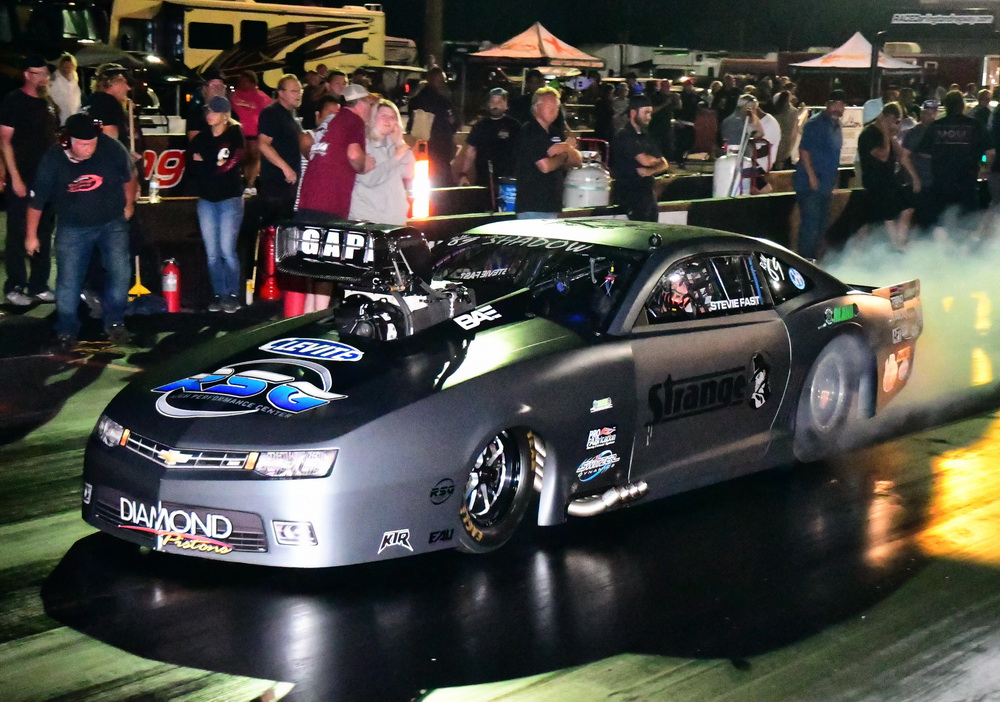 STEVIE WOOOS THEM ON DAY ONE - Stevie "Fast" Jackson, the reigning NHRA Pro Modified champion, proved that when it comes to Radial vs. The World competition, at least at Wooostock 2020, he didn't need to practice to be perfect.

Jackson drove his way to the provisional No. 1 qualifying position at the first major Drag Radial event since the pandemic halted live events.

"Me and Billy kind of decided to not test," Jackson explained. "We thought we were kind of where we needed to be. He asked me before we rolled up how fast I wanted to go. And I told him I wanted to start from the .54 that we ran in the final at Valdosta and kind of back up a little bit to be safe and send it. It ran exactly what we thought we would run. Just kind of set that thing up to where we can haul ass tonight."

For the record, hauling ass in Jackson-speak doesn't necessarily mean there is a 3.4-second pass to be had tonight. 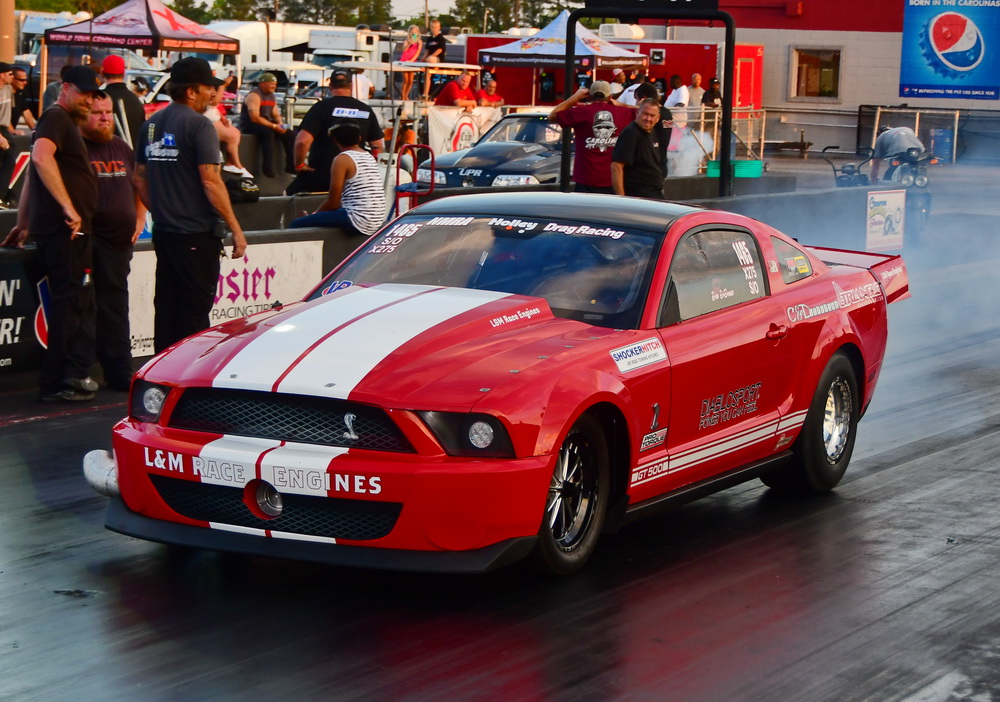 "I don't know that we'll have enough air to do that with a supercharged car here during qualifying, but it's always on the very tip of my tongue," Jackson admitted. "If for some reason it gets cool enough, and I think the racetrack is there, I'm going to swing at it. I promise you. And I will swing at it every single time I can swing at it until I hit it there."

John Strickland was tops in the Xtreme Pro Modified division, pushing the Galot Motorsports Camaro to a 3.680, 201.79. the nitrous entry of Chris Rini was second with a 3.709.

Qualifying will resume this morning, wrapping up this evening. Final eliminations are scheduled for Saturday. 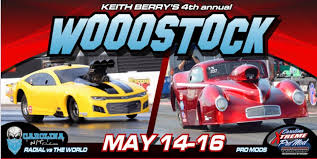 WELL, IT WAS FUN WHILE IT LASTED - South Carolina Governor Henry McMaster has rescinded permission for spectators to attend Wooostock 2020, scheduled to begin Thursday, May 14, and continue through Saturday, at Darlington Dragway.

"Initially we were not going to have fans, but then it was opened to where we could have 2,500," Berry said. "We got word through the grapevine it was eventually going to become unlimited, but I never promoted that part."

"I guess that has gotten the Governor all scared, or worried, I don't know, but the Governor called the Sheriff's Department here in Darlington and said, 'let's not do fans at Wooostock," Berry said. "The race is 100-percent a go. But no fans." 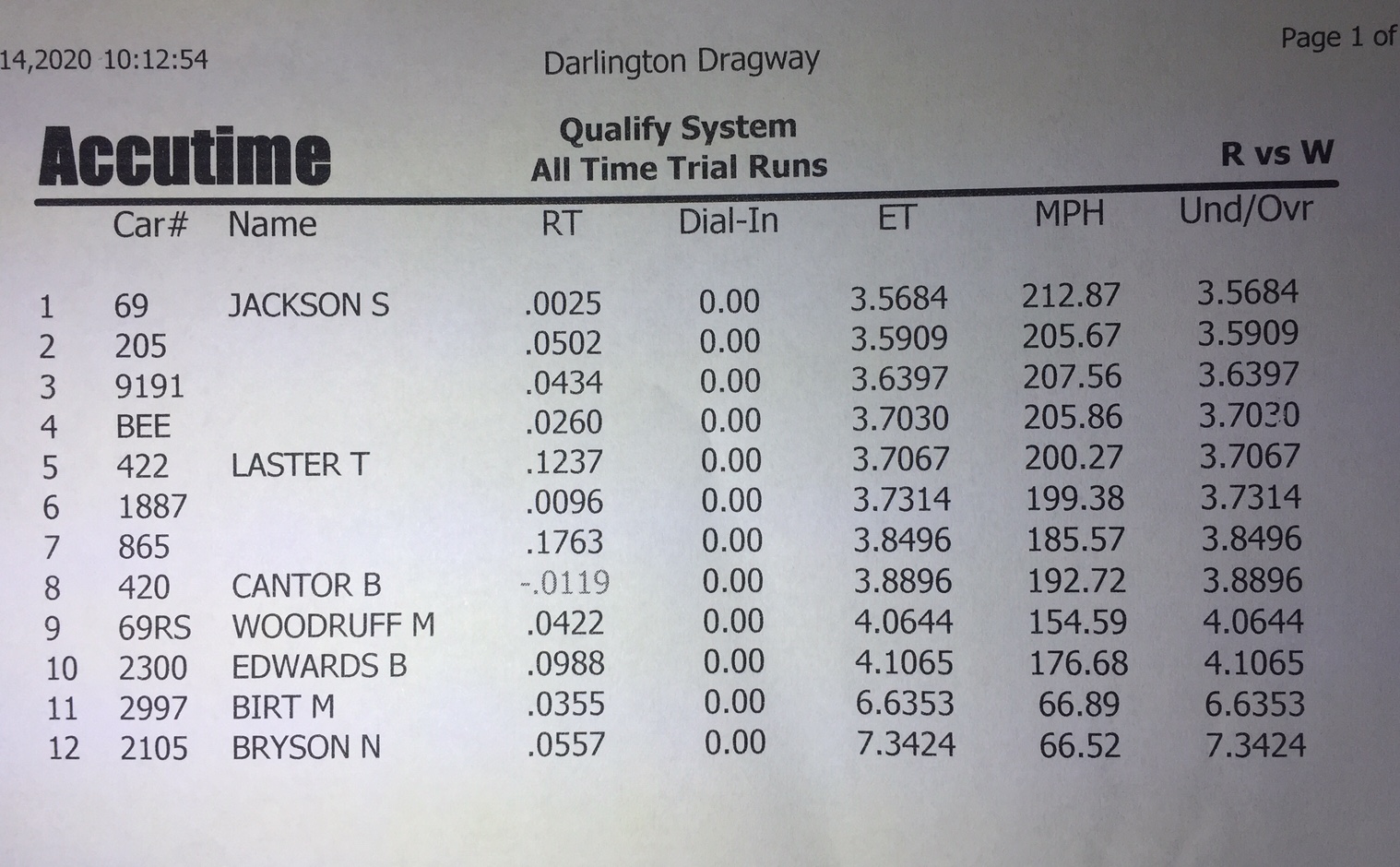 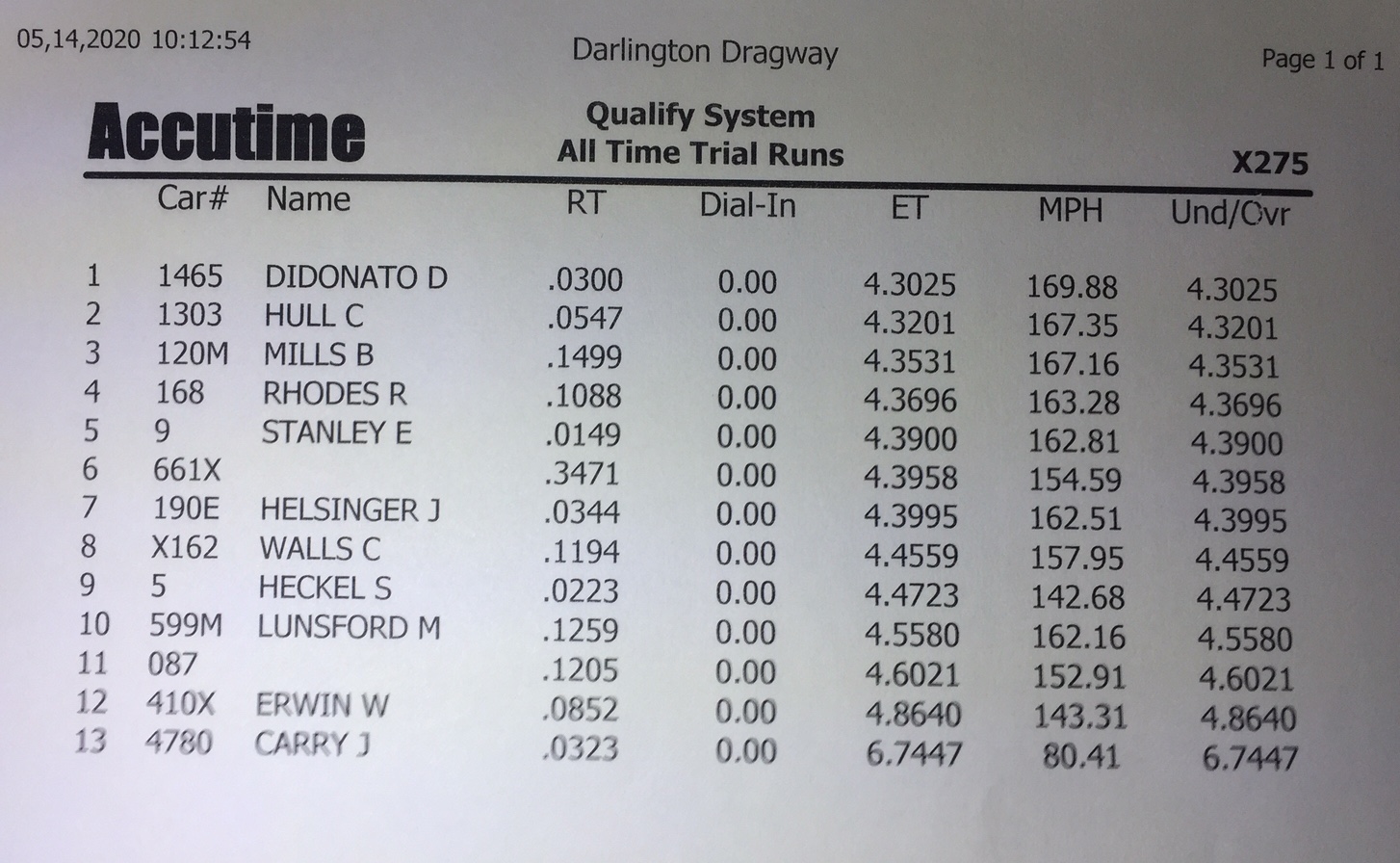 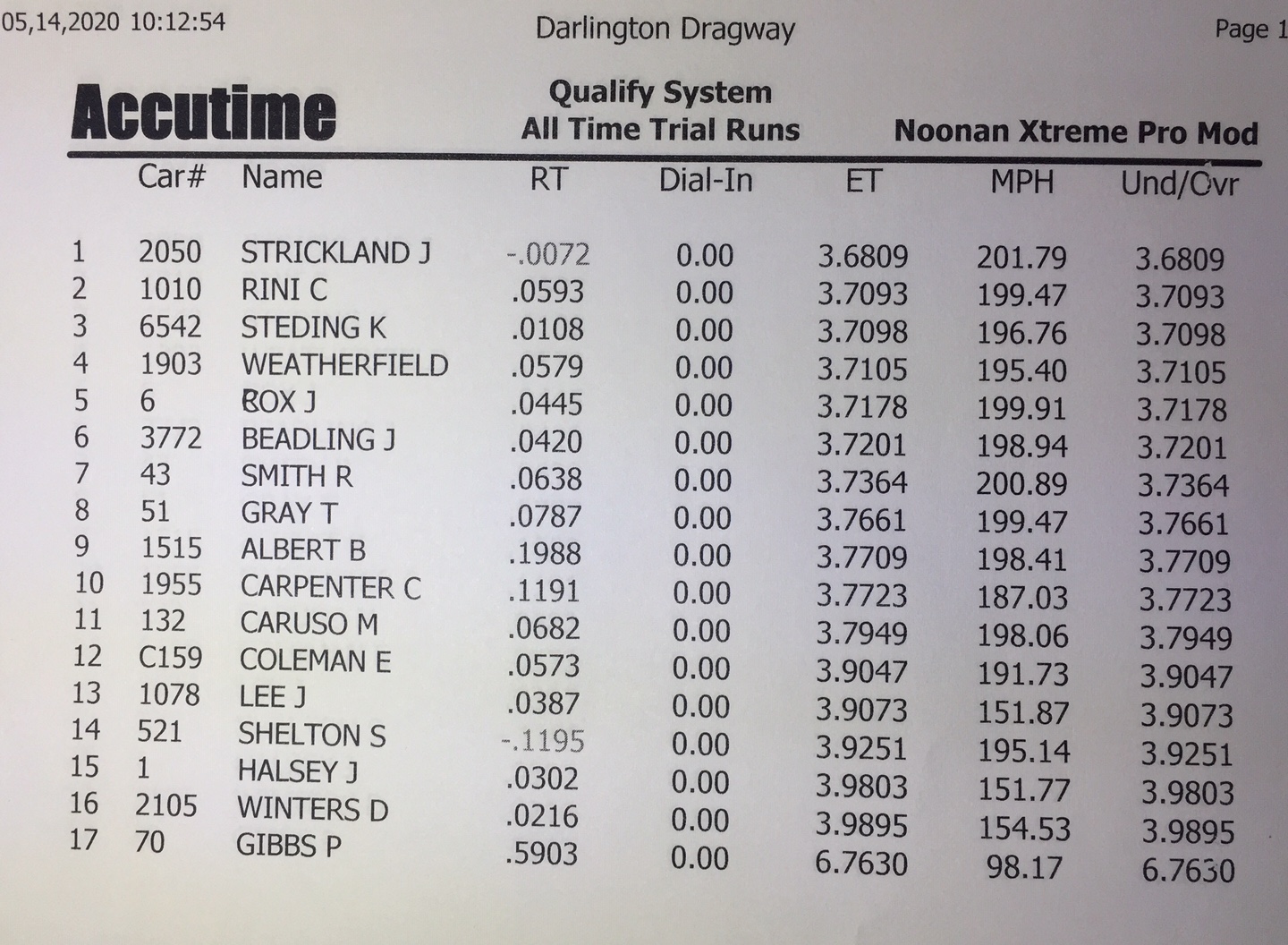