Keep up with this weekend's sportsman action from the Texas Motorplex as the NHRA Fallnationals races through the weekend. 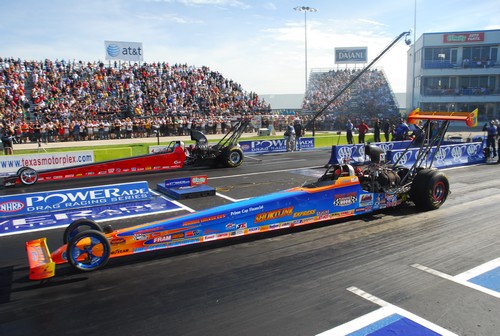 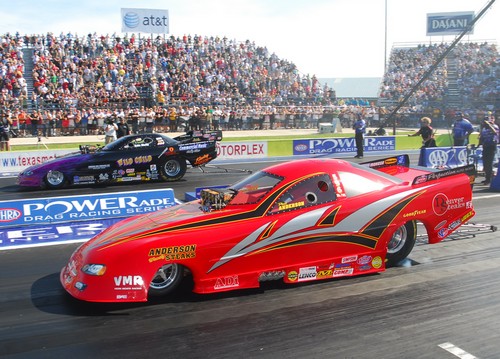 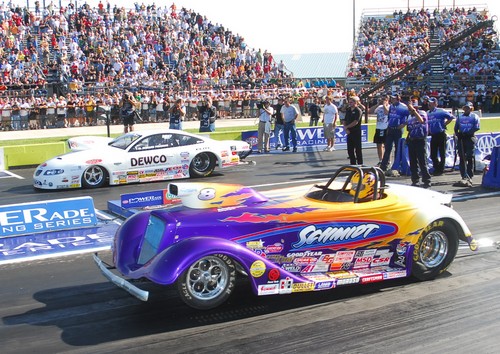 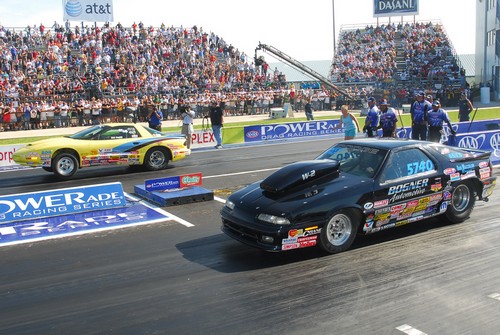 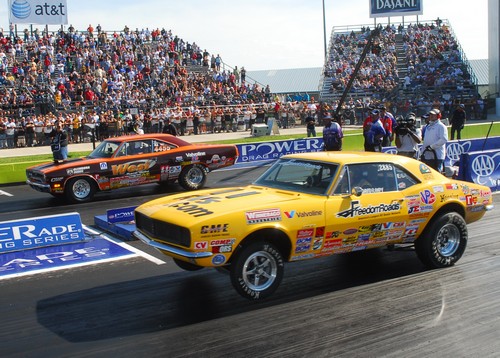 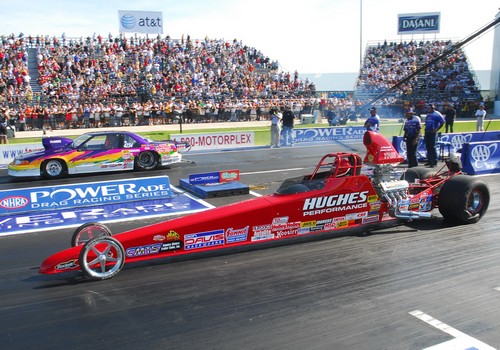 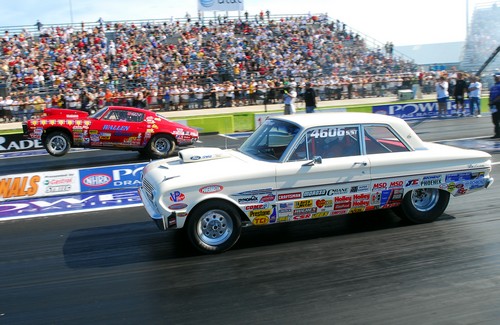 Crime and Tequila doesn’t pay – After a hard day of racing, Big Bruce, crew chief for the Tequila Petrone Super Comp team, felt there was more to be done. While cruising the pits in his golf cart he noticed a commotion going on near a souvenir trailer.

According to Big Bruce, “I was driving along, I didn’t even know what was going on, and a big guy came running by followed by two smaller guys yelling for help. We chased him down. The little guys jumped on my golf cart and they tried to pin him down, and he started fighting back – throwing them around like rag dolls. So, I went out there and put him in a choke hold against a trailer until the police came. It turns out, he had stole a lighter, and started fighting the guys in the booth, ran, and started fighting with them again. I just couldn’t stand to see the little guy get beat-up by the big guy. Crime doesn’t pay. Look at the day; he ruined his day and maybe his life. The police gave them an option. They could prosecute them for shoplifting or strong armed robbery since he assaulted them to escape. He’s now looking at a felony or multiple felonies.”

Woman’s intuition – A/Fuel Dragster pilot Troy Kaiser spent the first part of the weekend struggling despite the efforts of his team. Just after the final qualifying, Troy decided to take some valuable advice.

“[Crew member] Mary Meyers said after the second qualifying run yesterday, the car went slower, so when we got back to the pits, she suggested that we do the complete opposite of what we did,” said Kaiser. “So we did and it went a lot faster. We went .8 faster, and we give all the credit to Mary. We are now talking sweet and nice to her today. We run another A-Fuel car, Brandon Pierce tomorrow. He smoked the tires today, so I think we have a really good chance. My teammate Randy [Meyer] is out, so I think we’ll have a full crew tomorrow and Randy will help and give us full attention tomorrow. I think things will go really good tomorrow.”

Rookie stardom – Super Comp driver Courtney Force feels she has learned a lot this season. As the youngest daughter of Funny Car legend John Force, the teenager had big expectations. This weekend at the NHRA O’Reilly Fall Nationals, she again has high hopes and big expectations.

“We did one round this morning, then it rained and we got a little delayed,” said Force. “I think we will run again around 7:00, so time will tell. [The show] definitely adds to the excitement. I think it brings a lot more fans to the races. There is so much of a variety of people that come to the races now. It’s really exciting because I see a lot more girls out here now. It’s really fun, I love it. Brittney [Force] went out first round, but I’m not sure what she ran, she was behind me.”

From the announcer’s booth to the starting line – Former NHRA and current IHRA announcer Bob Unkefer continues to learn the nuances of racing in Super Stock.

“The car is spectacular,” stated Unkafer. “The car last weekend in Houston was dead on the money. I couldn’t find the tree with a seeing eye dog, but we kept working on it. We did figure out though what the problem was and we have rectified the problem. Results have been pretty good this weekend and we go racing right now. The car will pick-up; it looks like it will be .03 -.04 quicker. We’ve gone from a tail wind to a head wind, and that will play into things.”

Champ looking to score big – Reigning 2005 Lucas Oil World Champ in Super Comp and Super Stock Gary Stinnett is hoping to keep the momentum of his talented team. Stinnett commented, “I hope to get by so we can be here on Sunday and race. The cars are running good, so it’s all up to the driver. Everybody thinks that you should be able to come back and win every race and win every round. Everybody always tries to take their best shot every round, but they step it up a notch. They would rather chance a red light then to get beat, so it can make it rough.”

With two championship cars running, Stinnett is working hard at what he does. “I just work all the time, everyday and every night,” said Stinnett. “I come to the races to rest and catch-up on sleep, but it’s fun and I enjoy it. The problem is that I like each car and each class too much to give it up and race one. They both have their idiosyncrasies that I enjoy, and I just haven’t decided to give one up yet.”

Following in Dad’s footsteps – Ashley Force, daughter of John Force, is quickly making her mark on the racing community just as her father has. The young woman racing her A/Fuel Dragster in the Top Alcohol Dragster class is showing the world she too can go rounds.

“We just want to get things ready depending on the air read-out tomorrow and hopefully win,” said Force. “I race Spencer [Massey], who actually used to work on my team. He’s a good buddy of mine; that will be fun going against them. They are doing awesome. They are running in the .30’s and he cuts great lights, so it will be a tough round, but you know first round was tough for us and we came out on top. We really tune the best we can. You can only run as good as your car can run, and you start thinking about what the other guy is doing and you screw yourself up. We kind of try to race in our own lane, but you do kind of think about it.”

The Dyno Meter – Dave Heitzman didn’t get to enjoy his rookie season too long. During Friday’s qualifying for the NHRA O’Reilly Fallnationals, the final round was contested for the rain-delayed Houston NHRA Division 4 – LODRS event. Heitzman won it and with that victory lost all the perks that came along with being the new kid on the block.

“The guys told me that I lost all claim to rookie mistakes,” Heitzman said. “It was hot and I mean hot out there. There was a 100-degree heat index but that didn’t stop the boys from tuning it up and making it go right down the track.”

Blown Alcohol King – Jay Payne is once again pulling double duty.  Running in both Top Alcohol Funny Car and Pro Mod during this weekend at the NHRA O’Reilly Fall Nationals, Payne is hoping to get in the winners circle in at least one class.  “[The Funny Car] ought to run high .60’s,” said Payne.

“It ran a .75 there, and that qualifying run was the final from the Houston points race, so that was kind of cool.  Both cars should run good, but we’re struggling a little bit with the Pro Mod.  We’re trying some new things and it’s just not there yet.  All we can do is work on it.”

According to Hanna, “We’re in the middle of the pack in a tough field, so we’re happy with that.  The car is making progress.  We switched over to the Goodyear tires last weekend at the Houston divisional, and it finally quit shaking, so we’re able to get after it more.  We’ve been getting after it a little more each pass – finding a nickel here and a nickel there.  To be No. 10 right now as a new team – we’re pretty happy with that.

“The other teams have some experience and they have their combinations a little bit more refined.  We run the Lenco drive combination like [Mick] Snyder does, so there is only three of us out here doing that.  We’re trying to collect data and build on it.  We’ve all been on teams, so we’ve all got experience in various capacities.  I’ve been crew chief for a couple of cars the last few years, and Harry has been around it for a long time.  Our experience kind of catches-up with getting some data for the car; it all comes together.”

Hometown proud – Former National Event winner and local heavy hitter Craig Anderson of Waxahachie, Texas is excited to represent the local drag racing talent at the NHRA O’Reilly Fall Nationals.  Anderson, who is racing in the super competitive field of Super Comp is looking for a better day and better weather tomorrow.  “We’re all over it,” said Anderson.  “We’re making a lot of changes this weekend, and the weather is funky; the humidity is 70 on one run and 30 the next, so it’s tough on everybody.  Tomorrow morning it will be a lot different.  It’s tough.  Every racer is competitive.”

Pulling double duty – Racing extraordinaire David Rampy is once again pulling double duty, racing in two Lucas Oil Sportsman classes.  Just coming off a disappointing weekend at the last NHRA National Event in Indianapolis, Rampy is seeking redemption.  “Both cars are running very good,” said Rampy.  “We think we have things evened out.  The one car that didn’t run well in Indy is running well here, so we think we kind of straightened out the problem.  The Stocker struggled in Indy and the Comp did well.”

Although Rampy had performed well in Comp Eliminator his last National Event, during a NHRA ruling to re-run round one of competition, Rampy took too long to stage and was timed-out on the auto-start.  Rampy had originally won that round but couldn’t repeat in the re-run.  According to Rampy, “NHRA thought there was oil on the track when the last four pair of Comp cars ran, so they decided to re-run us, which is something I’ve never heard of my whole life.  Who knows, it was just one of those deals.  They do what they want to do and we have to play by their rules.  I made it the first time, but the second time I really don’t know what happened.  It was one of those deals that I lost track of time or something.  Anyway, I got counted out and red-lighted.  The fact that we had to re-run, the thought was just wrong.  Maybe we can re-group here and everything will be good.  The Comp car is running real good and the Stocker is running good, so hopefully everything will workout here.”

Optimism and high hopes - Comp Eliminator veteran Richard Freeman is heading up a two car team and hoping both cars are able to beat out their competitors.  “Everything is good,” stated Freeman.  “We’ve got one car with Dewco that is No. 4 and I ended-up No. 10.  I had a shock problem, but everything is going good.  It’s just tough Competition.  We’ll have to see how it all comes out tomorrow morning.  I think there are about 36 cars and it’s a pretty tight field.  We have to go out and do our thing.  You need to be in the top seven – that’s good, and if you are not, you’re better off being down at the bottom because No. 1 races 17, No. 2 races 18, so you don’t want to be in the 17 or 18 spot, but we’re good there.”

Not only does Freemen have 35 other Comp Eliminator racers to contend with, the weather and high wind is playing a major factor today.  Freemen went on to comment, “The heaver car is okay, but my car gets jammed around by the wind a little bit.  More then anything the water grains really kills these naturally aspirated cars on horsepower.  Tomorrow the rumor is the high will be 75, so if that is true it can possibly be better, but we are still talking about a lot of water in the air.  It’s supposed to rain.”