Bristol Dragway is known as “Thunder Valley” not only because it cuts a path between mountains, but also because it can be home to incredible performances, and repaving will have done nothing but aid those pursuits. The facility hosted NHRA’s Springnationals from 1965 to 1967.

SUNDAY FINAL - JOHN FORCE GETS FIRST WIN OF THE SEASON; BERNSTEIN AND COUGHLIN ALSO IN 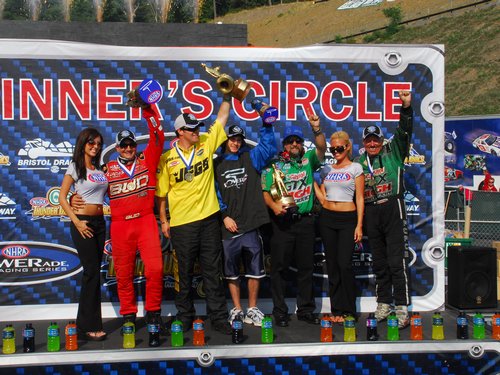 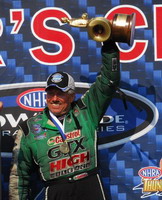 An emotional John Force celebrated his 123rd Funny Car victory Sunday like it was his first, erasing the memories of a very tough first half of '07 with a huge win at Bristol Dragway.

Force outlasted Advance Auto Parts pro Cruz Pedregon in the final -- 4.993 at 284.62 mph to 5.024 at 279.73 mph -- to score his first win of the season. Prior to this weekend's seventh annual O'Reilly NHRA Thunder Valley Nationals the 14-time champion hadn't advanced past the quarterfinals in his Castrol GTX High Mileage Ford Mustang.

"We went from being one of the greatest teams ever in the sport, if I can pat my own back, to being the worst, right there in the cellar," Force said. "We just couldn't figure out what was wrong. This [car] was the most stubborn woman I've ever met in my life. No matter what we did to her she wouldn't go down the track. I couldn't even beat my own daughter.

"I also asked (former driver, the late) Eric Medlen to forgive me. I said, 'I know you're up there Eric and if I've done something wrong, I'm sorry.' I don't know how all that works but it made me feel better in my heart to get it off my chest. I'm not seeing aliens or hearing voices, but today we started having magic."

Despite his struggles this year, Force's win puts him in a tie for 13th place, just 63 points behind the Countdown to the Championship cut-off point. 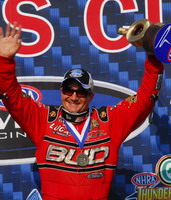 Bernstein had an easy victory pass after UPS racer Vandergriff smoked his tires right at the hit of the throttle. Just to make sure, he kept the Budweiser/Lucas Oil machine in the middle of the lane and posted a 4.648 at 317.57 mph to claim his fourth win of the year in five finals. He now has a career final-round record of 16-5.

"We started the day with that 4.53 and I was blown away," Bernstein said. "Then we go out in the second round and the semis and we're pedaling like crazy just to get to the other end. Tim [Richards, tuner] made a great call in the final to just back it down and get it to run from A to B.

"We've struggled the last few weeks but this team doesn't get down. We just stayed focused and we were able to come out today and get a win. We seem to have a habit of rebounding like that after we DNQ or lose in Round 1."

After three forgettable races that resulted in him dropping from first to fourth place, Bernstein moved back up to second Sunday with his big win. He now trails "Hot Rod" Fuller by 74 points.

After stealing away holeshot wins from points leader Greg Anderson and third-place runner Dave Connolly en route to his second career final, Pro Stock finalist Kenny Koretsky almost did it again in the money round against Coughlin. The veteran racer left first, .013 to .041 seconds, and led past the 1,000-foot timer before Coughlin's JEGS.com Chevrolet Cobalt blew by to take the win by .0024 seconds. The final numbers had Coughlin crossing in 6.809 at 203.22 mph to Koretsky's 6.839 at 201.82 mph. 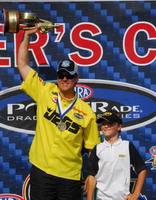 "What a great win for this race team," said Coughlin, who tied Don Prudhomme and Anderson for 10th place on the all-time wins list. "Kenny raced his wheels off his car today and he was hammering the Tree. Luckily, our Cagnazzi horsepower was just barely enough for me to win, and when I say barely, I mean barely, just two-thousandths of a second margin of victory.

"There's been a Cagnazzi Racing car in the last six finals and between Dave [Connolly, teammate] and me we've won four so that tells me the entire team has been working extremely hard to make us look good. Today they gave me a flawless car. I was slow letting the clutch out a few times; that was the only issue we had."

Coughlin's second win of the year combined with points leader Anderson's first-round exit allowed Coughlin to pare Anderson's once gigantic lead to just 86 points. Over the last nine races, Coughlin has out-scored by a margin of 804-718 points.

Koretsky averaged a .013-second reaction time on the day. He was runner-up to at the 2004 Indy race.

Sunday's final results from the Seventh annual O'Reilly NHRA Thunder Valley Nationals presented by Q at Bristol Dragway.  The  race is the 12th of 23 in the  NHRA POWERade Drag Racing Series: 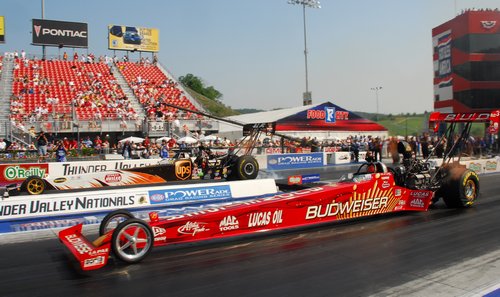 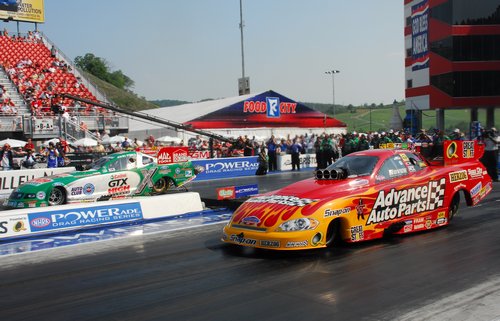 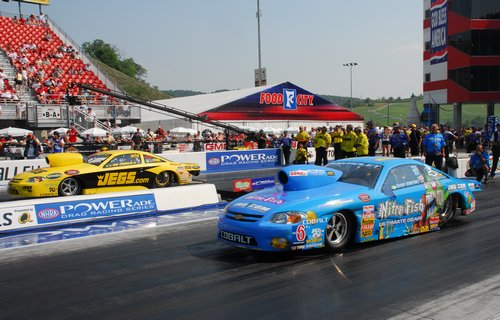 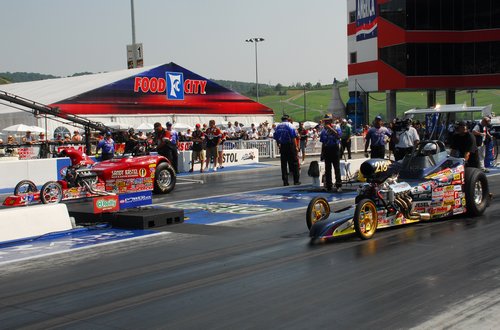 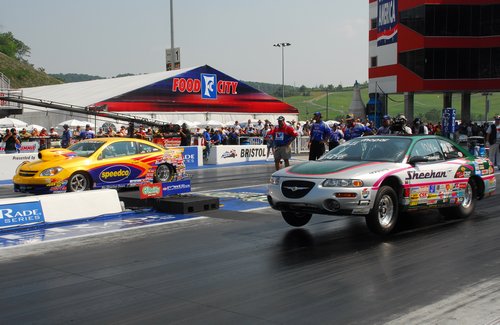 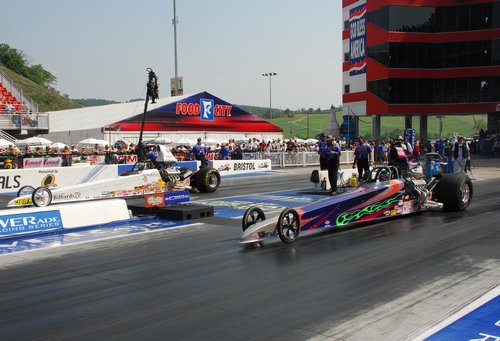 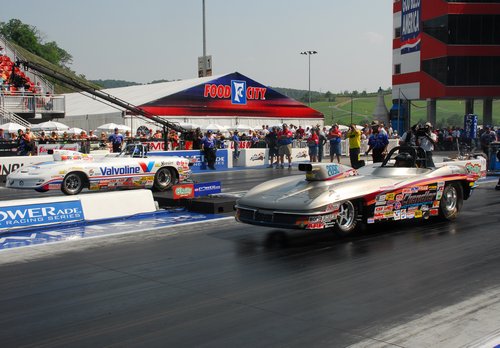 
OT SCHUMACHER GRABS NO.1 SPOT IN ; COUGHLIN AND WILKERSON TAKE NO.1 SPOTS ALSO 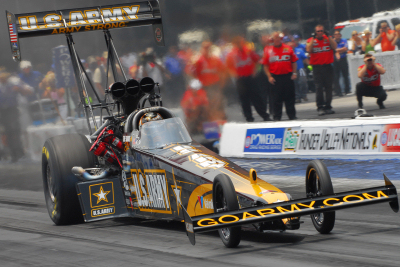 Reigning champion Tony Schumacher will try to become the first Top Fuel driver this season to win a race from the No. 1 qualifying position after racing his U.S. Army dragster to the top of the field Saturday at the seventh annual O'Reilly NHRA Thunder Valley Nationals presented by Q.

Schumacher, Funny Car leader Tim Wilkerson, and hard-charging Pro Stock racer Jeg Coughlin all finished the day on top of their respective ladders at historic Bristol Dragway at the NHRA POWERade Drag Racing Series event. Coughlin's run to the top was the most impressive as he went from out-of-contention to race favorite in 6.765 seconds. Like Schumacher, Wilkerson relied on his Friday night run to earn low qualifier honors.

This was Schumacher's sixth low qualifying effort of the season, which he secured with his Round 2 pass of 4.544 at 321.12 mph. He then backed it up with Saturday's quickest pass, a 4.585 at 322.58 mph in his U.S. Army dragster to prove he has a car capable of winning its third trophy of the year.

"My guys have assured me that we are capable of winning out of the No. 1 spot so I'll try my best to rest easy tonight," Schumacher said. "Getting down the track in the heat is probably way more important than being No. 1 qualifier. It's great to be on the pole again but we don't race at night. We race when it's hot out and tomorrow we start at noon, not 11 a.m., so it'll be hot for sure."

Matco Tools pro Whit Bazemore stayed second with his 4.547 at 327.43 mph. Brandon Bernstein is third with a 4.553 in the Budweiser/Lucas Oil dragster, while points leader "Hot Rod" Fuller remained fourth with a 4.592 in his David Powers Motorsports dragster. 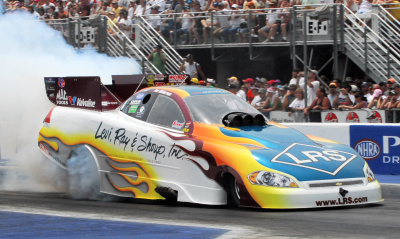 A favorite along pit row and among the fans, Wilkerson scored one for the underdogs by wrapping up his first No. 1 qualifying award since the Brainerd event in 2004, a span of 65 races. His Round 2 pass of 4.819 at 321.42 mph in his Levi, Ray, and Shoup Chevrolet Impala SS entry was untouched in Saturday's two sessions.

"We've been coming around here lately, going down the track nearly every pass," Wilkerson said. "We really just try and treat every day and every pass as something new. We put Friday night behind us today and started working on getting down the track under the sunshine. Being No. 1 qualifier is a good thing but it doesn't mean anything tomorrow."

Mail Terminal Services racer "Fast Jack" Beckman locked up second place in his Dodge Charger with a 4.827 at 319.67 mph. Cruz Pedregon parked his Advance Auto Parts Chevrolet Impala SS in third with a 4.831. John Force qualified fifth with a 4.853 in his Castrol Ford Mustang, while points leader Ron Capps moved up to sixth with a 4.863 in the Brut Dodge. 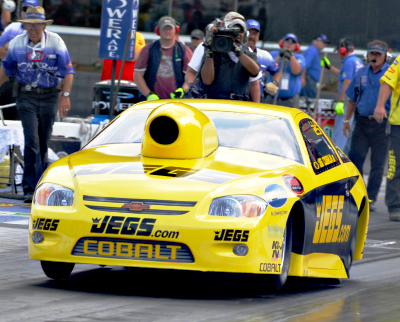 Coughlin's Saturday morning pass was impressive as he jumped from out of the Pro Stock field to the top spot with a powerful 6.765 at 204.05 mph in his JEGS.com Chevrolet Cobalt. Coughlin was 12th after Friday's action and was pushed down and bumped out by the time he made his run of record, but his Cagnazzi race team responded under the pressure.

"It's very common in Pro Stock these days to be sitting back in the staging lanes all suited up and hear the runs ticking off and you know you're gonna get bumped out," said Coughlin, who has now qualified on top three times this year. "I was a little concerned. We hadn't run well and as a driver you want to make sure you stage as perfectly as you can and make those shifts as perfectly as you can. We were able to get it all together and make that run."

POWERade points leader Greg Anderson and Coughlin's teammate Dave Connolly were second and third, respectively, with a pair of 6.782s. Anderson was slightly faster with a 204.35-mph clocking in his Summit Racing Pontiac GTO compared to Connolly's 203.58 mph top speed in his Torco/Seeyle Wright Cobalt. 's stablemate Jason Line was fourth with a 6.789.

First-round pairings for professional eliminations Sunday for the Seventh annual O'Reilly NHRA Thunder Valley Nationals presented by Q at Bristol Dragway, the 12th of 23 events in the  NHRA POWERade Drag Racing Series.  Pairings based on results in qualifying, which ended Saturday. 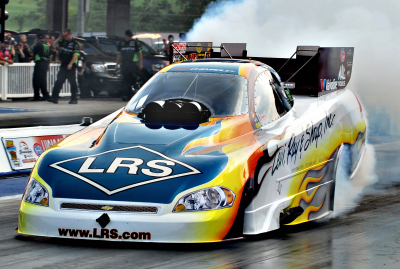 Racing without the benefit of a teammate or a big-name sponsor, Wilkerson showed the little guy can still hang with the big dogs, if only for a day. If his run stands, Wilkerson will have a chance at his first No. 1 qualifying award since the Brainerd race in 2004.

"The people are usually pretty excited when they see an independent guy run good," said Wilkerson, who received an ovation from his peers when he towed back to the pits. "There are a lot of teams in the Funny Car and Top Fuel ranks that give us a lot of help. Don Schumacher has been letting me run his blower dyno here lately. He'll probably lock the doors now on me but I hope not. There's a group out here that pulls for the little guy and I think that's cool."

John Force continues to qualify well, earning the fifth spot here with a 4.853 at 292.46 mph in his Castrol GTX High Mileage Ford Mustang. Daughter Ashley is 15th with a 4.923.

Points leader Ron Capps crossed the centerline in Round 2 in his Dodge Charger, which voided what looked to be a good run. His earlier 4.949 second run places him on the bump. 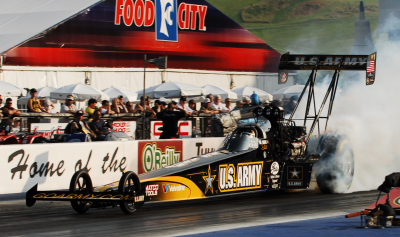 Schumacher, the four-time champion, finished the night with a 4.544 at 321.12 mph to gain the No. 1 position heading into Saturdays session.

"I had the 'chutes out early because I got over by the wall," Schumacher said. "I joked with Alan [Johnson, tuner] that I pulled them early so we wouldn't be No. 1 qualifier, since we can't seem to win from the No. 1 spot. We saw what happened in front of us and if Lee Beard [Bazemore's crew chief] can run a number Alan's sure going to try and top it. I knew we'd either get to No. 1 or smoke the tires."

"I'm excited to be up here [as top qualifier]. It's been awhile," said Line, who last qualified No. 1 in February in . "We've had some busy days lately. We made what I call a series of bad decisions starting in and we're not really out of the woods yet. Unfortunately, my goal right now is to make it through this weekend without breaking anything else. We already have enough to do before the Western Swing."

winner Dave Connolly broke a motor in Round 1 but rebounded well in the evening session, qualifying a lofty second on the grid with a 6.795 at 202.88 mph in his Chevrolet Cobalt. Points leader Greg Anderson is third with a 6.797 at 202.97 mph, the last of the 6.7-second passes on the day.