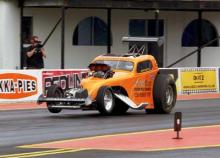 The Summer Nationals had a huge overall entry of Sportsman racers but this weekend the headliners were the ultimate in doorslammers - the Pro Modified cars running in their third round of the MSA (Motor Sports Association) British Drag Racing Championship. The 220mph machines had seven British entries and one Dutch competitor but had to contend with copious amounts of rain that was deluging the country during the past week. It more or less wiped out the Saturday qualifying day allowing all competitors just a one shot qualifier on Sunday morning.

In the Pro Modified class Danny Cockerill driving his 526 cubic inch motored Chevy Bel Air sat in pole position with a fine 6.385/226.26mph clocking with the remainder of the pack stretching all the way down to the wild but slowed up 12.131/73 from Gordon Appleton’s Chevy Camaro then the DNQ (did not qualify) from Holland’s usual strong contender Marc Meihuizen in his Chevy Coupe. 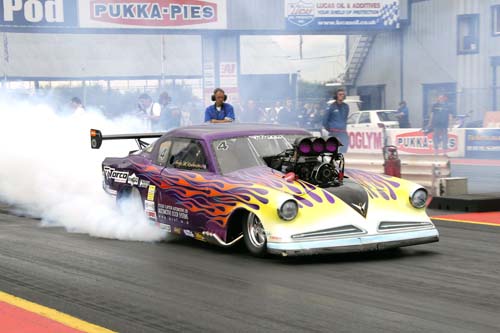 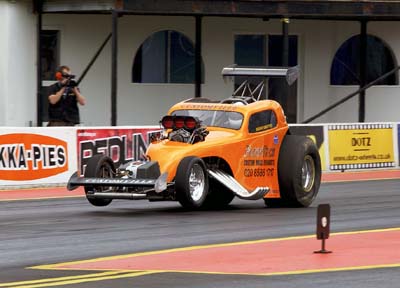 The Summer Nationals had a huge overall entry of Sportsman racers but this weekend the headliners were the ultimate in doorslammers - the Pro Modified cars running in their third round of the MSA (Motor Sports Association) British Drag Racing Championship. The 220mph machines had seven British entries and one Dutch competitor but had to contend with copious amounts of rain that was deluging the country during the past week. It more or less wiped out the Saturday qualifying day allowing all competitors just a one shot qualifier on Sunday morning.

In the Pro Modified class Danny Cockerill driving his 526 cubic inch motored Chevy Bel Air sat in pole position with a fine 6.385/226.26mph clocking with the remainder of the pack stretching all the way down to the wild but slowed up 12.131/73 from Gordon Appleton’s Chevy Camaro then the DNQ (did not qualify) from Holland’s usual strong contender Marc Meihuizen in his Chevy Coupe.

Eliminations were held under warm but mainly overcast skies and were kicked of by the bye run from Cockerill who ran the weekend’s best E.T. a 6.383 at 222mph. A newly licensed Kev Slyfield took his Willys on a near collision course with the wall on his launch, rescuing it to record a losing 8.335/172 as opponent Andy Robinson turned in a 6.845/204 winning lap. Number two qualifier Ian Bishop in the only nitrous injected car in the group managed a personal best 7.129 at 189mph but lost to Gordon Appleton’s Wheelgame Camaro’s 6.452/207 who poured out vast amounts of engine smoke in the lights resulting in some hurt pistons and liners. Ray White managed a 7.999 slowing to a 139mph lose in his 526 c.i. vintage Ford Zephyr as Bert Englefield in his black Ford Coupe carded a 7.088/196 win to wrap up round one. 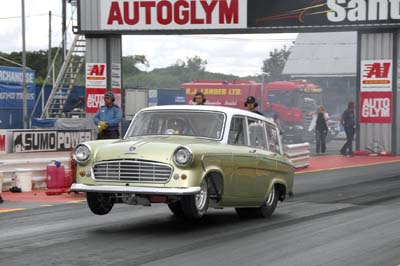 Danny Cockerill faced Andy Robinson in the first pairing of round two but was slower off the line then faltered to a 7.541/140 as his air bottle ran out starving him of power to shift gears, Robinson went on to capitalize with a 6.712/202 win. Bert Englefield shook the tyres severely slowing him to a coasting 12.558/64 in a lucky solo win as Appleton could not repair.

The final proved a win for Andy Robinson in a judgement ruling over Bert Englefield as the timing system locked up failing to record the race but clearly Robinson took the trophy. “Were you aware that you were ahead at the finish” was the posed question afterwards, a brief “Yes. I could tell I was ahead, I was just surprised at no times” he reflected.

In the increasingly popular Nostalgia Fuel Altered Association final after their complicated qualifying points were allotted it became a battle of the alky Topolino’s as Dennis Wratten and Frank Bennett slugged it out all the way up track. Wratten got the nod with his first six, taking the trophy with the 6.948/194 as Bennett chased, not quite having the car to pass him his 7.116/191 took runner up.

The Super Modified category fielded six cars with Andy Kirk running a 7.686/178 to top the pile. Round one and the ousted were Andrew Chilton, Nigel Payne and Paul Mander. Kirk got the second round bye run and didn’t waste the chance to get a better time than round one a 7.686/174 got him to the final. Tim Garlick left on a good light and hung on to take the win with a 7.733/174 beating the better 7.682/177 from Andy Hone’s Ford Granada. 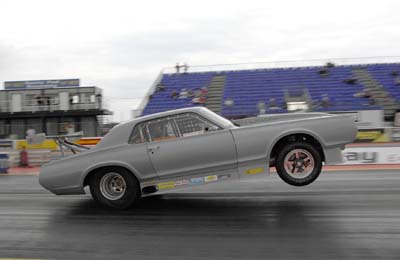 A bigger entry was expected but the inclement weather kept some of the Super Comp competitors away or others just gave up after the main qualifying day was washed out. Qualifying in the 8.90 index class was led by Peter Creswell in his vintage Ford Mustang with an 8.911/148 and sitting on the bubble was Dave Day in his Roadster with a breakout 8.851/148.

Several heavy hitters went out in the first round including the current point leader Belinda Bull and last years Champion Chris Johnson to name but two. Into the second round and it was Peter Creswell, Brian Pateman, Martin Curbishley and Chris Isaacs that advanced to the semis.

The final was a solo as Creswell broke just leaving the line allowing Chris Isaacs an easy 10.321/103 win.

In Super Gas there was a sixteen car eliminator after Martin Curbishley’s Brogie Roadster took number one in qualifying with a 9.938/147 leaving Steve Wells sitting down on the bubble with a breakout time of 9.741/110. Some big names departing rounds one and two included Mike Bentley, Bob Doyle, Tim Adam, Martin Curbishley and Stuart Morrice. The semi finals saw Paul Marston break out with a 9.825/144 leaving the win with Conrad Stanley’s 9.915/154 whilst Jon Morton overcame the stout leave by Brendan Clancy and took the win with a 9.950/138 to the 9.985/130. 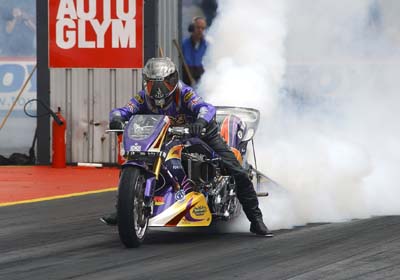 Into the final and Jon Morton was on a roll, once again he chased down the better leave by a wheels up launch from Conrad Stanley’s neat red Firebird, Morton’s Camaro clinched the win with a 9.920/141 to the 9.936/154 lose.

Super Street saw an eleven car chase with top qualifier position going to Mark Watkins and his blown Datsun 280ZX on a 10.963/122 and down on the bottom was Charlie Chivers Capri with a breakout 10.758/119.

The final however came down to a run off between the ‘Thatadoo’ Camaro of  Ian Brown and the old Ford Zephyr of Neil Grant and it was Grant that kept his cool running a legal 10.933/131 to take the win as Brown broke out with a losing 10.814/109.

Twenty Two competitors packed the Super Pro ET ranks with the top spot going to Steve Johnson in his ‘Motor Mouse’ dragster at 7.362/179 placing Derek Flynn in his last outing in the class before a move to Top Methanol Dragster at twenty two with an under index 6.796/193.

The final was a battle of dragsters with Steve Johnson recording a near perfect leave of 0.0001 coupled with the 7.335/179 that gained him the event class trophy as opponent Barry Giles in the Giles & Hartley machine runner upped with a 7.738/169.

The huge entry in Pro ET was headed by Keith Herbert in the great looking Plymouth Sport Fury with an 11.504/113 leaving Steve Bolton and the wheelying Plymouth Scamp down at twenty-nine on a 9.396/142.

Keith Herbert remained in the frame all the way through and his 11.506/104 got the award in the final as opponent Neil Hunter in his Capri ran a losing 10.325/135 for runner up.

Despite its size the Dodge Ram truck made its way through the rounds and ended up facing Lee Huxley in his Mustang. Despite a long wait for his light Huxley chased down the truck and nipped in for the win at the lights with a 15.616/85 to the 19.754/68 runner up.

There were fourteen runners in the exciting Junior Dragster ranks and it was Matthew Seamarks ‘Gingerman’ modified machine that sat on pole with an 8.150/79 with a reaction time of 0.0130. Clare Giles’ little stock dragster sat in the unenviable last place with a 15.189/39 on a -0.116 R.T.

There were seventeen magnificent Street Eliminator cars racing for a win and topping the qualifiers was Jeff Meads in his yellow Ford Pop on an 8.385/164 leaving Colin Lazenby down at the bottom of the pile for a change with a below par 10.678/133 from the Chevy 210 Sedan.

Worthy mention must go to Steve Nash in his newly built Cougar who lost in round two to Jon Webster. Nash came out on a test pass after his dismissal and surprised everyone including himself with a series of huge power wheelies all the way down track.

Onto the two wheels missiles and Top Fuel Bike where a tight field of four machines was separated by just over one second. Steve Woollatt unsurprisingly took the lead with a slower than usual 6.627/165. Current ACU Champion Steve Carey was next wit a 6.945/191 whilst Ian King managed a below par 7.138/159 and Ian Turboville a 7.657/169.

Chris Hall led the Funny Bike runners with a 6.967/188, the only six in the one shot qualifier. Paul Knapp sat on the bottom of the eight bike class with an 8.940/148.  Neil Midgley was on a roll after initially qualifying number two with a 7.121/150 as he despatched Dave Bailey in round one, ran a stunning 6.661/202.62 in two to beat Tim Blakemore’s 7.362/169 and go on to the final. Meeting Midgley would be Ken Cooper who managed to get by Stephen French the Chris Hall in two.

Neil Midgley wheelied his machine for most of the quarter and turned in a winning 6.768/200.08 that also provided him with the new Funny Bike speed record as it backed up his earlier 202.61mph. Ken Cooper slowed to an 8.326/140 for second place.