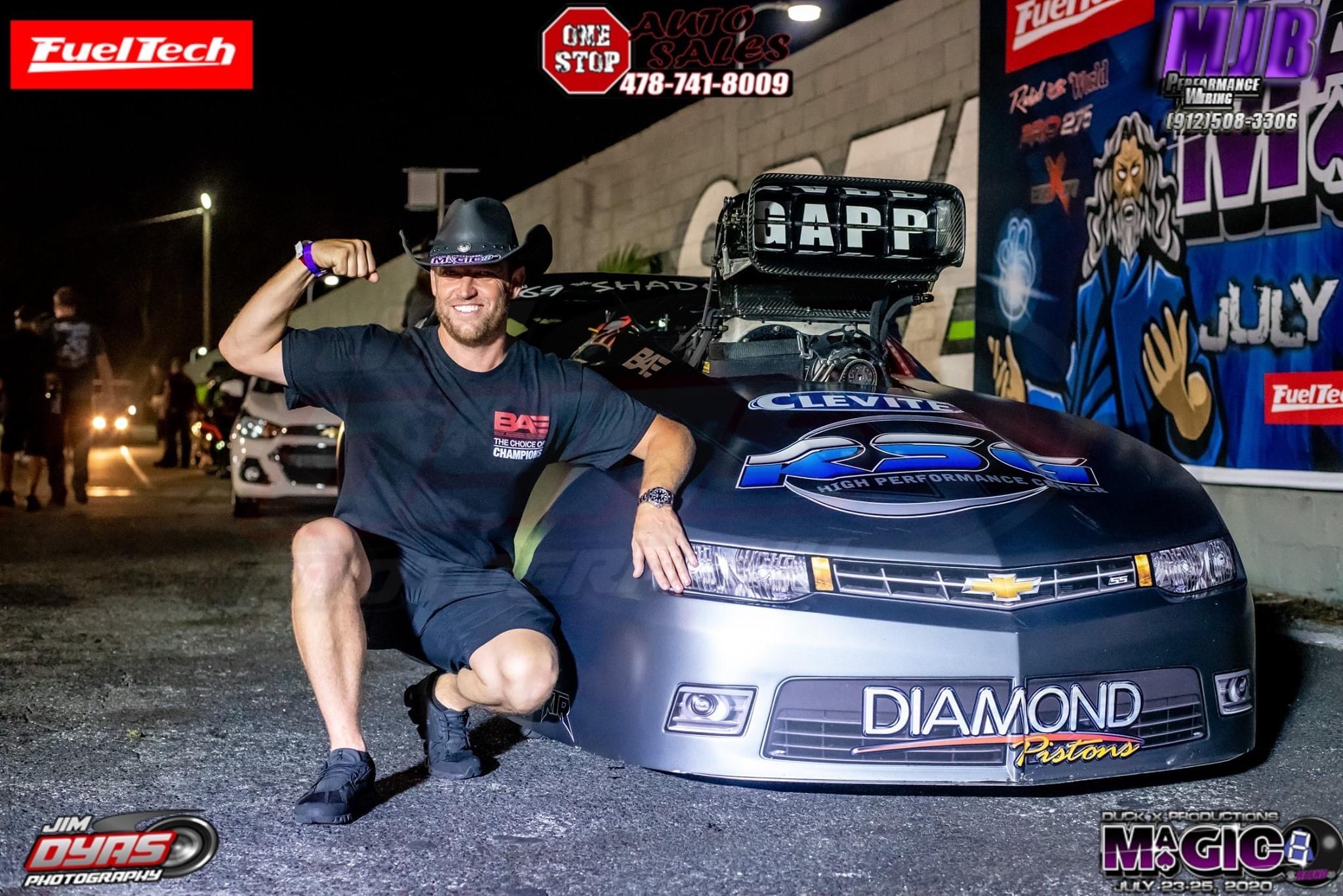 When major league baseball legend Babe Ruth called his legendary shot in Game 3 of the 1932 World Series at Wrigley Stadium, and then delivered on the bold move, it was the stuff legends were built on.

Friday evening, just ahead of the final Radial vs. The World qualifying session at the Magic 8 Drag Radial event promoted by Duck X Promotions, a lesser figure in world sports history pulled off a similar feat. However instead of pointing a wooden bat at the fence, iconic small tire racer Stevie “Fast” Jackson made a proclamation as well.

He intended to qualify No. 1, so as to not have to race teammate Marcus Birt in the final round of the event in Orlando, Fla. For Jackson, showing confidence and similar bravado is nothing new for the Evans, Ga.-based driver. Sometimes he hits, sometimes he doesn’t.

Friday night he hit. Saturday evening he backed it up with a victory over Birt in the finals. If only Jackson was playing baseball.

“That was a hairy ride,” Jackson admitted. “It looked under control, but that was a treacherous mile around there. That thing blew up something in the drive train at about half track and smoked up the whole inside of the car. I didn't see where I was at or where I was going until I turned off track on the top end. It was bad. I just looked over, spotted how far I was away from the wall, and just kept the car that far from the wall.”

Jackson understood even though he was the No. 1 qualifier, Birt had the better car on Saturday night. He was regularly .03 to .04 behind Birt, a car ironically Jackson tunes. There were few options available to Jackson other than keep the gas pedal to the floor regardless of the hell it was creating inside of the engine.

“I've never been so angry to win a race,” Jackson said. “And I mean that. I got out of the car and I was cussing. Marcus was like, ‘What's wrong?” 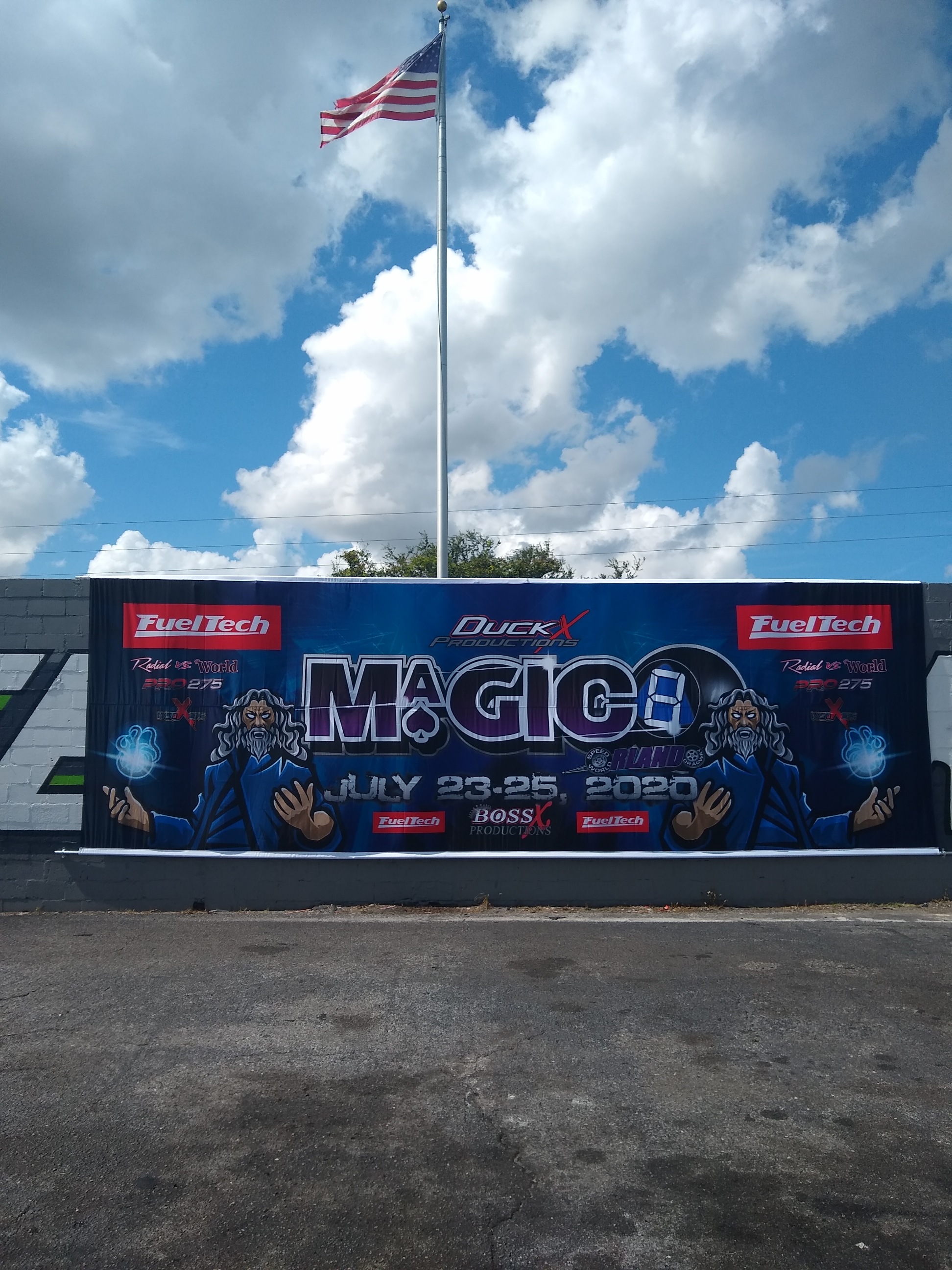 “It's hard to get crushed as a crew chief and win as a driver, but it is what it is. It's why we line them up.”

Jackson has no one to blame but himself. He couldn’t resist poking the bear; a bear which inevitably took him on the ride of his life.

While Jackson was trailing Birt all Saturday night in performance up until the final round, his reaction times were second to none, proving he is just as good a driver as a tuner.

Jackson was quick on the tree; in fact the quickest of all three rounds with an .015 and a .012. He was quicker than Birt on the tree snagging .006 in his pocket out of the gate.

“Man, it's awesome to get to put on a show for the fans at a time when I think our sport really needs to show for the fans,” Jackson explained. “You got people like Donald Long and Ozzie Moya and Maria that are putting their neck out on the line, losing money to have these events to help our sport and our industry keep going.

"And for us, it's much more about supporting that. It feels awesome to win the race, but at the end of the day, we're all drag racing fans. We need drag racing to win. So we do whatever we can to help further the sport. And it's cool to win. I just talked to a group of 12 kids in the winners circle and explained to them how the car works and when you can do that and a winners circle, and you get 12 kids interested in drag racing, that's far better than winning the race. And I mean that.”

As Jackson sees it, impressing youthful drag racing fans makes a much better legend than calling a shot which has become the norm for the drag racing icon. 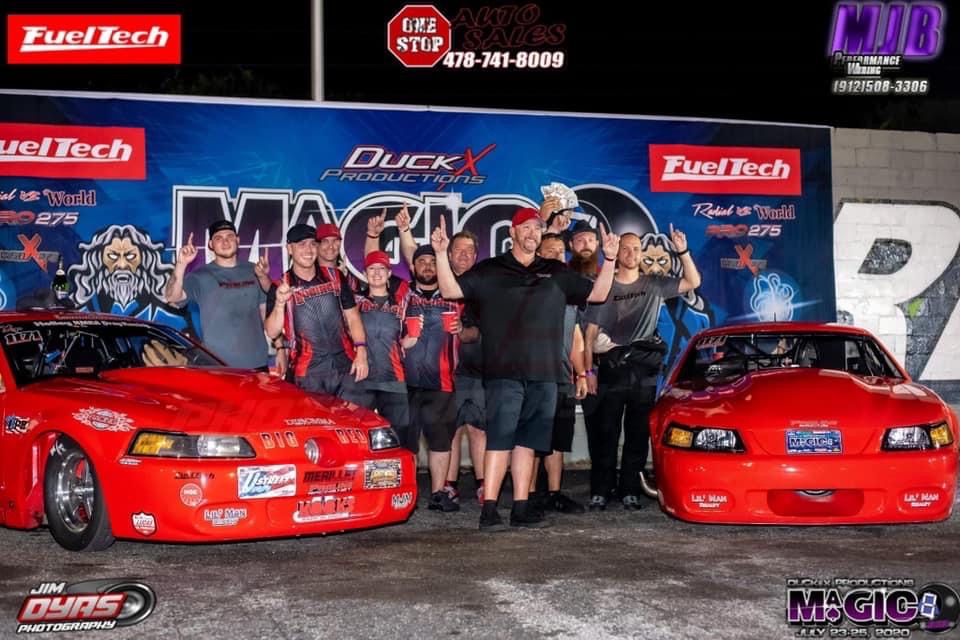 Possession in legal terms might be nine-tenths of the law, but for team owner Manny Buginga possession of two-third of the winning cars at the Covid-8 was all the law and order he needed to make the drag radial event at Orlando Speedworld Dragway his personal playground.

Dilliard qualified No. 2, drove Buginga’s Mustang to a convincing victory, stopping the timers with a 3.863, 196 mph run to get the best of Tommy Ranier’s Camaro.