AS SPONSOR SUPPORT GROWS, SO DOES MATT SMITH'S EFFORTS 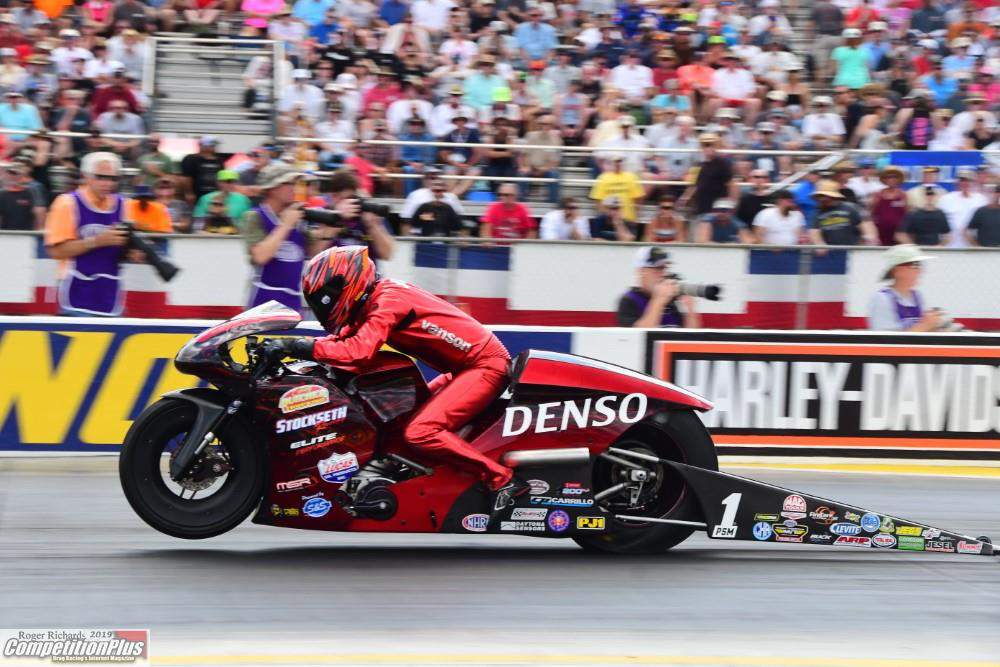 Matt Smith has seen the highest of highs and the lowest of lows during his illustrious racing career.

He has ridden the highs of two championships in 2007 and 2013 and nearly two dozen race wins, to the lows of missing races and skipping runs due to lack of funding. Just a couple of years ago, Smith wasn’t even sure if he would be able to continue racing with no money and no help, leaving the team in flux and unsure of its future.

But then he received some help. A new sponsor in Denso came onboard. And then he started receiving a bit of help from other race teams such as Elite Motorsports. And then the results on the track started to improve. A top qualifier here, a race win there. He even set the new NHRA record for speed in the class at 201.76 mph. And then, when it mattered most, it all came together in the form of a third championship last year.

“We’ve been to some pretty low points. Times where we didn’t have a sponsor and we didn’t know if we were going to get to race and had to sit runs out at different races to save money and save parts,” Smith said. “But that has changed. We’ve got a good sponsor right now. Do we need more help? Yes, we definitely need more to compete with the Harley team out here. They have four times more budget than what we have, but the biggest thing is we are running right there with them and we are making it work. To be successful, you need money. Money drives the sport. But where we are right now, I am very happy.”

And it is that success against the Harley-Davidson team that Smith is most proud of.

Despite a massive gap in funding, technology and team support, Smith has been able to run alongside the likes of Andrew Hines and Eddie Krawiec, even beating them much of last year and edging them both to claim his third PSM title.

“We are pretty proud of that. It is just me and Angie (Smith) in the shop working. We take care of all of our own motors, Elite helps with the cylinders for us, but that is it. Everything else we do in house,” Smith said. “When you go up against that black trailer down there, that team has 30 employees in their shop and all the CNC machines in the world and to beat them is pretty special to us. We love what we are doing and we are going to keep doing it as long as we can.”

Coming off that championship-winning season, Smith has backed that up with a win and two final rounds in 2019, placing him fourth in points behind the Vance & Hines Harley-Davidson duo of Hines and Krawiec, as well as Hector Arana Jr. But at this time last year, he was seventh in the standings and went on to win the championship.

Can he find that mojo as he enters the second half of the year just like last year? He thinks so.

“We are running good. We’ve got a bunch of motors and we are not hurting parts. We are just very consercative right now,” Smith said. “We are not trying to push our stuff really hard because we don’t want to get penalized by NHRA. We are trying to play the smart role right now and just not run really, really fast and save our stuff for the Countdown.”