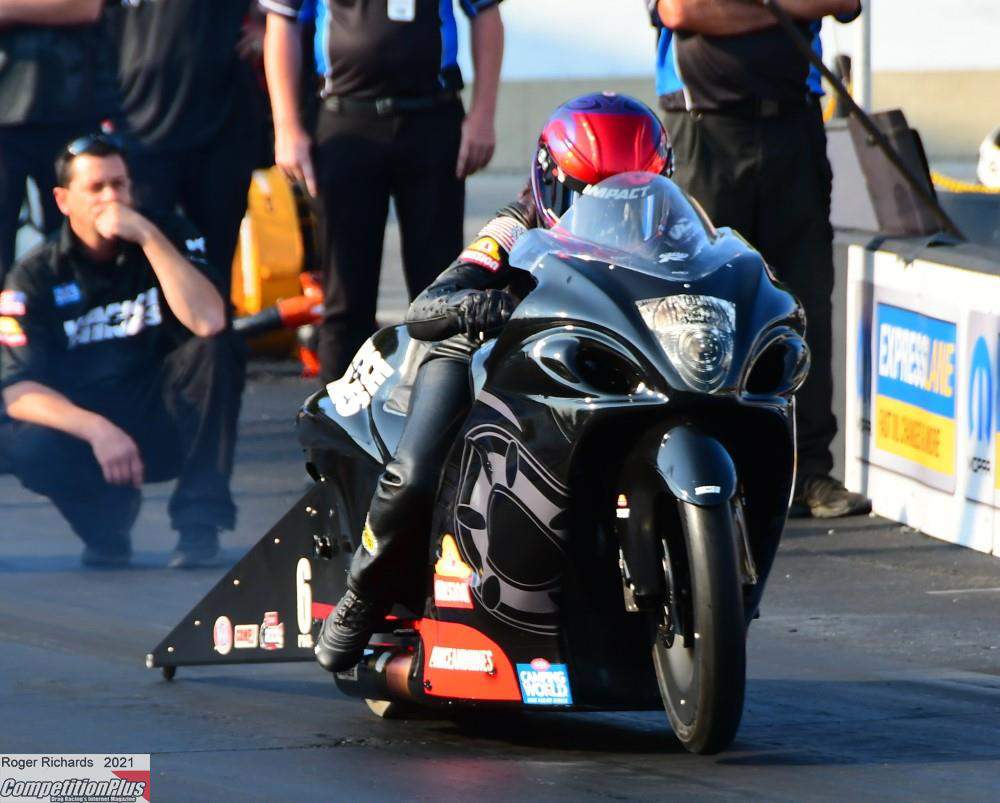 Getting off to a good start in qualifying has not been iconic Pro Stock Motorcycle rider Angelle Sampey’s strong suit in 2021.

Alongside Ryan Oehler during Friday’s lone session at the Mopar Expresslane NHRA Nationals in Reading, Pa., the past NHRA champion hit her mark with a 6.761 elapsed time at 198.85 miles per hour.

“It’s an amazing start because I’ve actually struggled getting on the racetrack on the first round of qualifying basically all year long,” Sampey admitted. “I’ve gotten in on some runs but this is the first time I’ve taken it out of the trailer; bring it down the track and go number one. So really excited about that.”

As Sampey sees it, as superb as her first attempt was, there was some performance left on the table which can be tapped into during Saturday’s qualifying sessions, expected to bring equal if not better conditions.

“We talked earlier about trying to get it down the track in a straight line and I pretty much did that,” Sampey said. “Did it pretty well. A little bit of a correction I need to make on it. I didn’t shift perfectly. So there is more in the run. So I’m excited about it. But just for the most part, the momentum that I feel going into the next round of qualifying, because it sucks when you have to go into second and third, and you’re either not in or way on the bottom. So it’s already a great start.”

This weekend represents the first race in the NHRA’s Countdown to the Championship, and Sampey expects the competition to be gunning for her top spot. She’s gunning for improvement as well.

Just opening an event with a good outcome is a positive the Louisiana-native has needed following the effects of Hurricane Ida on her home state.

“When my personal life is in a tornado, I really do well on the racetrack,” Sampey explained. “It’s something about being able to escape my world and put the helmet on and just get away, and it seems to be true. It’s 20 years now. When things are upside down for me, and I put the helmet on, I do better on the racetrack. It’s not something I want to happen. I don’t want my personal life to be in shambles, and not me personally, but I’m talking about my family at home with the hurricane and my friends. I have friends and family who have lost everything.

“I’m over here racing for them. I’m over here knowing how blessed I am even to be here. I have a house standing at home. So I’m taking advantage of every moment that I have on the racetrack to do well. Plus, it’s a motivation just to do well because I need to. I need to get this win. I need to bring that home to my people. So I feel guilty at the same time, though, because I’m here enjoying myself and doing what I love while everybody at home is struggling. But I know that they would want me to do this. So I’m doing it for them.

“This is my job. I gotta go to work. Fortunately, my job is the greatest job in the world. Most exciting for sure.”