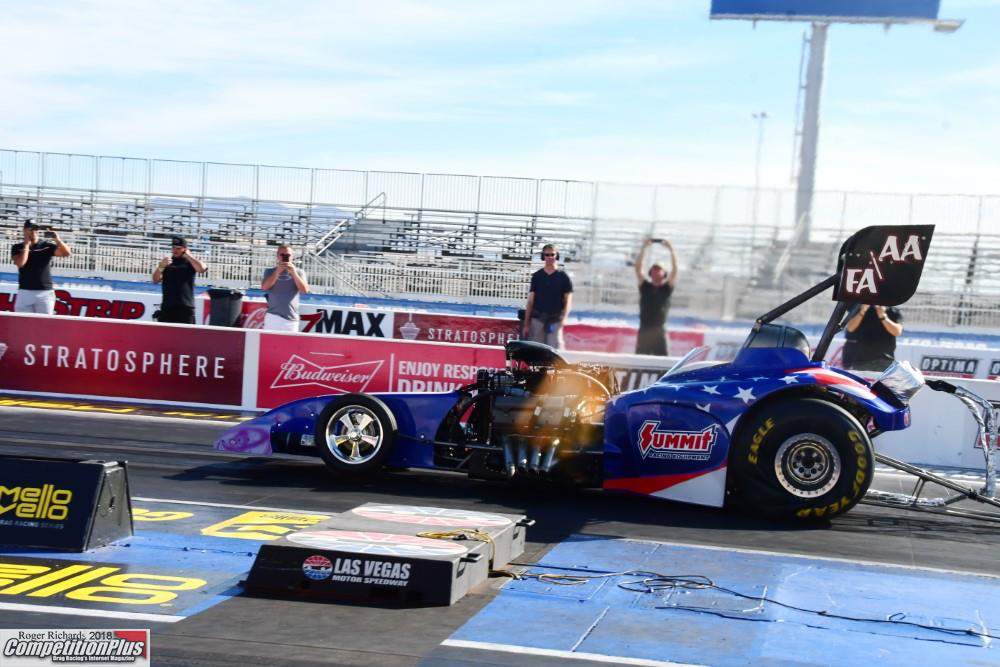 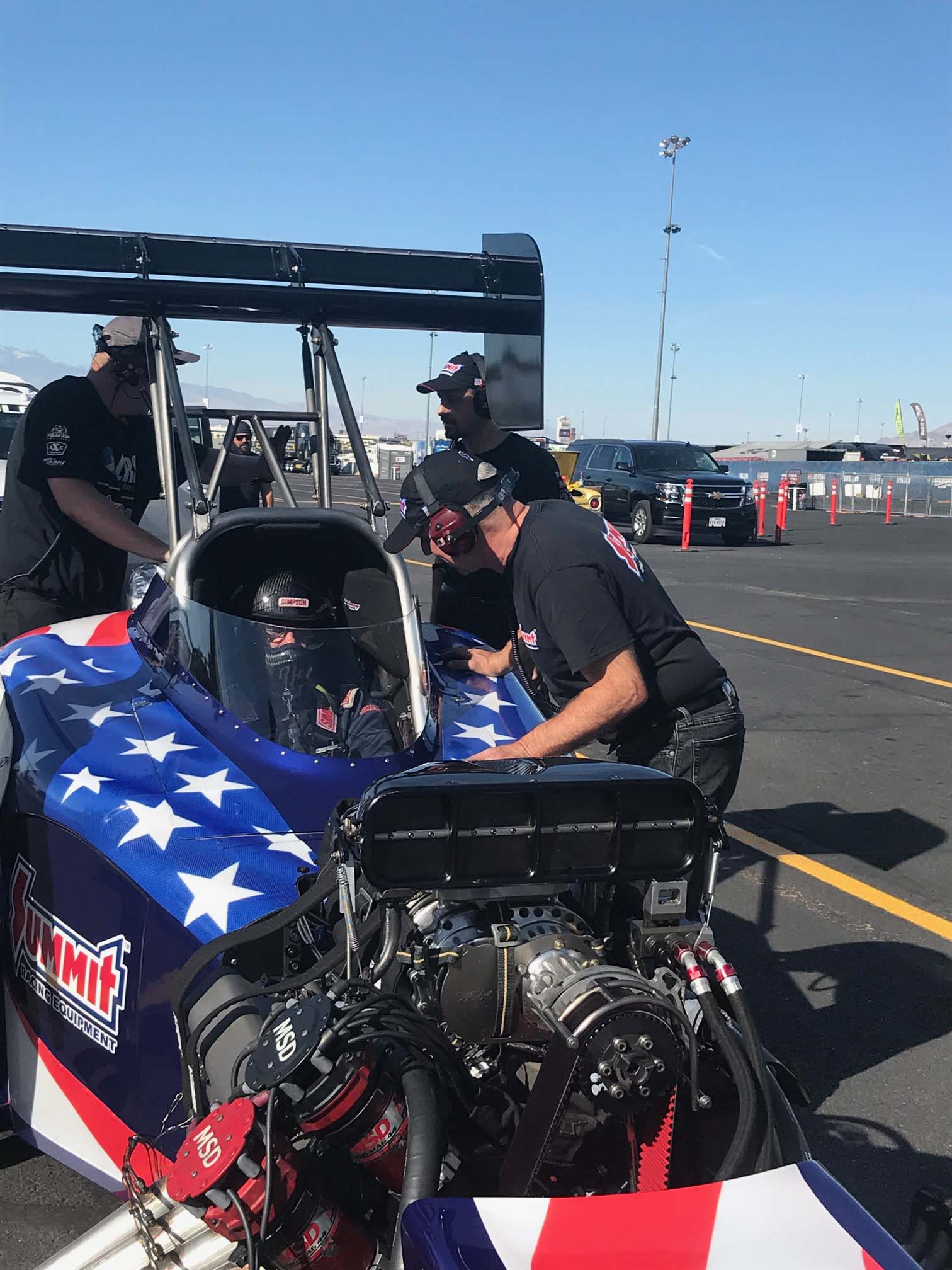 A Fuel Altered and a Doorslammer were the only two racing vehicles Richard Hartman hadn't driven in his career.

Since doorslammers don't burn nitro, for the crew chief of Funny Car icon Tim Wilkerson, the choice was an easy one.

Hartman, with the encouragement  of and assistance from Wilkerson, pursued the challenge on the Monday following the NHRA Toyota Nationals in Las Vegas.

"It was pretty awesome, really," Hartman said. "It was kind of one of my dreams to drive a Fuel Altered at some point and I kind of fulfilled that."

The momentous occasion was one which had been in the works for nearly a year.

"I built an Altered for a guy up in Canada, it’s blown alcohol but he kind of let me run a little wild with how I wanted to do it," Hartman explained. "I just love the car I built for Kyle Harris. I showed it to Tim one day, and I said, ‘Man, I’d love to build a Fuel Altered, but kind of expand on this concept a little bit."

"That was a little over two and a half years ago and a little over two years ago I got the chassis from him and been working on it," Hartman said. "This summer, early summer, he picked it up and finished it. So it’s been a long process, but we just wanted to see what we could do with it and have a little fun."

It wasn't as if Hartman hadn't raced nitro considering he ran a Nostalgia Funny Car last season. He wasn't the least bit intimidated when the AA/Fuel Altered fired for the first time.

" I sat there thinking, "this is awesome," Hartman recalled. "It finally happened."

The engine came to life, and the first run was just a roll of the dice for the crew chief who makes a living finding a baseline on the first run.

"How do you set a car like that up?" Hartman pondered. "There’s no template for it, right? So we just took our best guesses, and Tim put a tuneup in it, and I put the wings to where I thought they should be and we just said, ‘Okay, this is a stab in the dark, let’s see what it does."

In typical Wilkerson tune-up fashion, the fuel altered left the starting line like a crazed beast, with the wheels in the air. 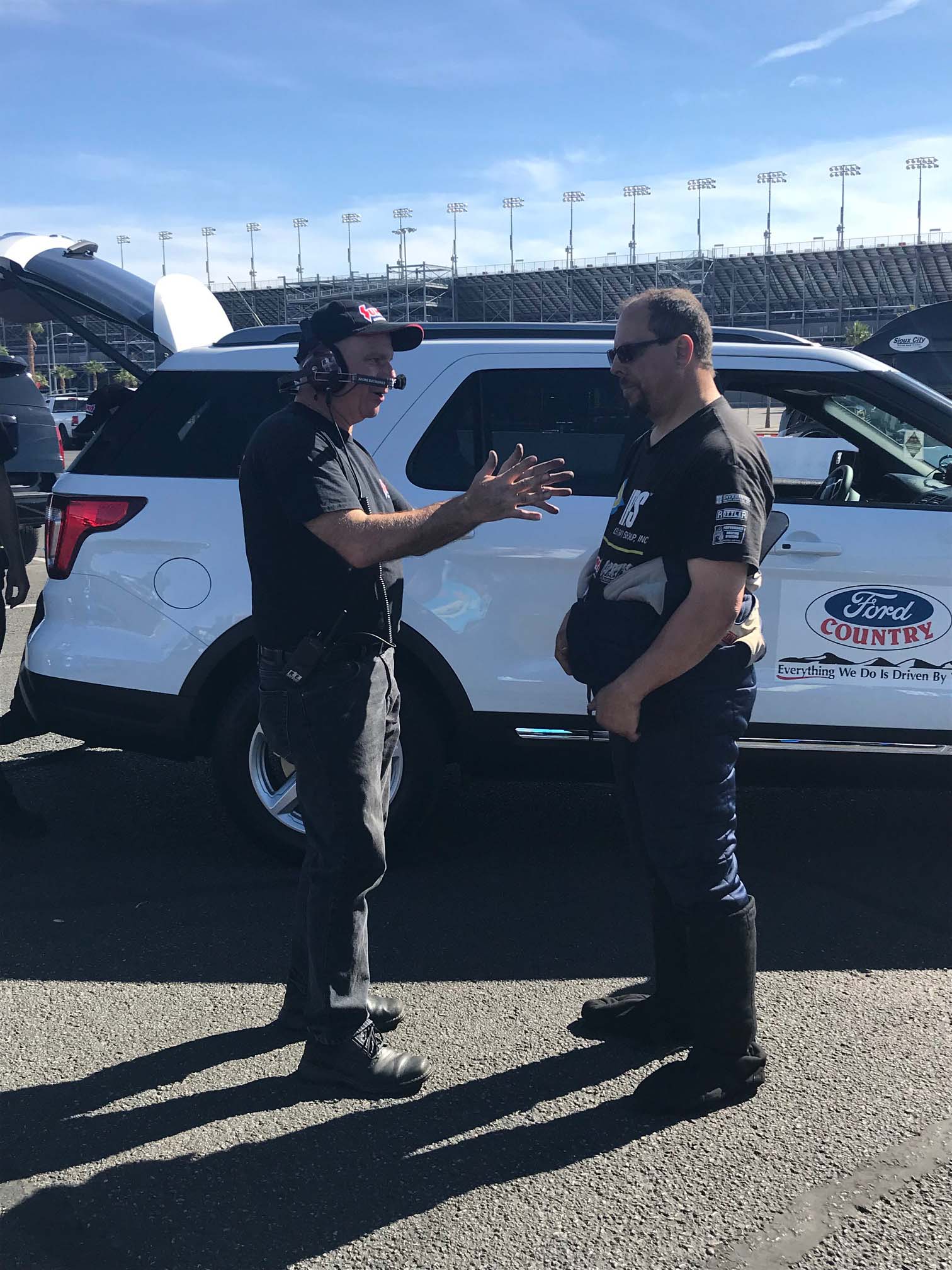 "I didn’t realize quite how far it was up in the air until I let off the throttle, it was a planned shut off, and when I let off it took about probably another 50-60 feet for the front end to come down," Hartman said with a chuckle. "That’s when I said, ‘Oh boy, this is a handful."

"So that was kind of, that was the moment that you’re kind of a little bit like oh boy, what have we got ourselves into?"

Hartman's best run was a 3.46 second to the eighth-mile, coasting at 233 miles per hour on a run where he admittedly aborted three seconds in.

Hartman said the Nitro community was there to watch the circus show; some Hartman said, even getting upset when he didn't notify them of his run schedule.

"When we made the final run, a couple things that were really funny, we get up there, and there had to be over a hundred crew chiefs and crew members and drivers and different things standing around to watch this because they knew it was going to be our final run," Hartman said. "Then we had several teams come up to Tim right after the run and say, because we had to tear down our pit and get ready to make flights and stuff that some of us had, and the guys had flights in the morning, so we had to get everything torn down. They said, ‘You guys tear down the pit. We’ll service the car for you so we can all go up and make another run."

"These are other teams offering to do this. So it was pretty awesome. It was a really neat experience. I’ve had a lot of friends and different crew members and crew chiefs and drivers just, ‘Man, when are you going to run that thing again? We want to come watch."

Hartman said there was no argument over who would drive the car.

"Obviously he’d do a better job driving," Hartman admitted. "I didn’t do horrible. My biggest fear was doing something stupid in front of him because I respect him so much. Luckily I didn’t do that. It was fun. We had a lot of good laughs. It was actually kind of a good team morale boost. All the crew members, they didn’t have to stay and do this, they volunteered to stay and do it. They all had as big of grins as I had. They thought it was awesome."

"We were going to fly Daniel out and have Daniel drive it, but Richard said, ‘Hey, I just want to do a burn out in it and stage it and hit the gas once. You don’t care, do you?" Wilkerson added. "I’m like, ‘No, we don’t care."

Will Wilkerson take a spin in the yet unnamed beast, and if you ask him, he's likely not to channel his inner cowboy any time soon.

"Probably not, as long as I am driving a Funny Car," Wilkerson confirmed. "I'll let Richard and my kid handle that. We probably won't turn down any match race offers, and we might make it out to Bakersfield.

'Hope we get to run it again, that was fun."