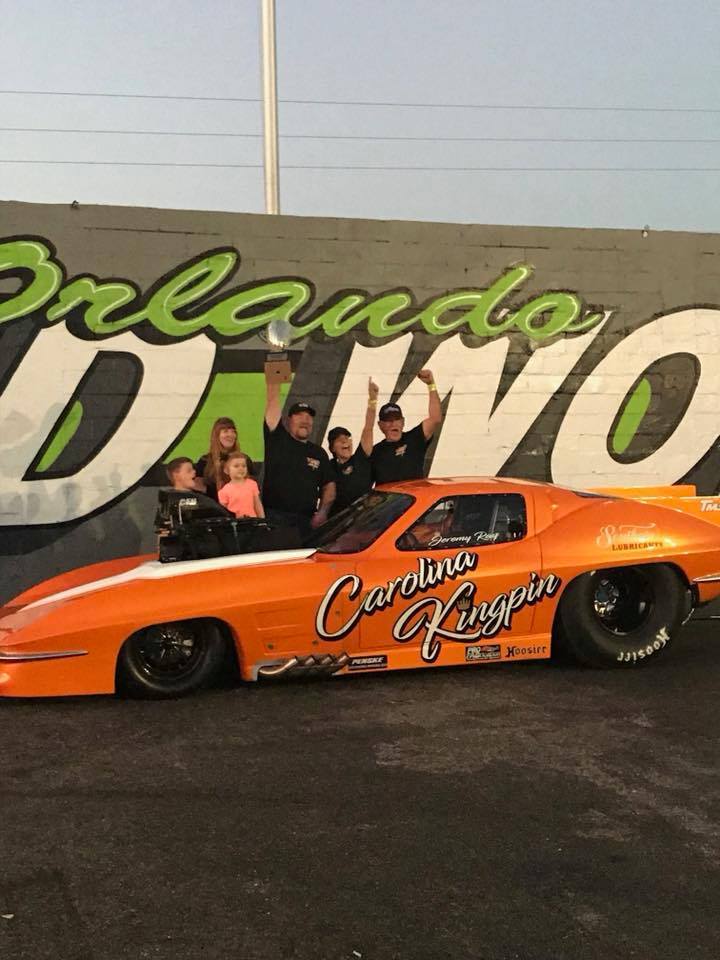 If Jeremy Ray’s victory over Shane Molinari last weekend at Orlando is any kind of a harbinger for the NHRA’s E3 / J&A Service Pro Modified Series, the already wildly popular class is growing and buzzing like a swarm of bees.

The exhibition race, which took place in conjunction with the NHRA’s Lucas Oil Drag Racing Series Division 2 meet, was a shakedown opportunity in preparation for the season-opening March 15-18 Amalie Oil Gatornationals at Gainesville, Fla.

For Lugoff, S.C., native Ray, it was a splashy debut in his ’63 Corvette. For runner-up Molinari, the Washington State businessman who along with Southern Californian Danny Rowe represents the West Coast, it was a message that he might add to his 2017 laurels from Norwalk this year.

For both, it was evidence that mid-pack qualifiers are every bit as dangerous as the No. 1. Molinari started from the No. 7 position, Ray from No. 8 in the 16-car field. (Dan Stevenson, who qualified 15th, reinforced that. He upset No. 2 Sidnei Frigo, of Sao Paulo, Brazil, in the first round.) Veteran racer Pete Farber anchored the field with a 5.95-second pass at the end of Friday qualifying that saw the bump spot change seven times in the last session.

“That worked out pretty good, didn’t it?” Ray, 38, who made his mark driving the “Carolina Kingpin,” said with a quiet laugh. “That’s what I came there to do. I won the last race in 2017 – that’s how I finished the season off. I didn’t expect to do any different. The last race [at South Carolina’s Darlington Dragway] I qualified No. 1, set the record, and won the race and wrapped up the championship for one of the eighth-mile series I ran in, the Carolina Extreme Pro Mod Series.”

Molinari, who set low elapsed time of the day at 5.799 in the quarterfinals, said of his final-round effort, “I just went up there and blew the tire off, shook the tire at about 330 feet. And there he [Ray] went. There’s not much you can do about it.”

Brad Personett is beginning his second full season of tuning Molinari’s turbocharged ’68 Pontiac Firebird. And what better person could Molinari have acquired? Personett earned his career-first NHRA Pro Mod victory at the 2010 U.S. Nationals for the first turbo-car victory in series history. Molinari is sold on Personett: “He’s a smart dude. He’s definitely the s---.”

So were Ray and so many others in Orlando. Stevens led the field with a 5.76-second, 256-mph performance in time trials in Jim Bell’s turbo entry. In testing, the tuner-driver-engine builder posted a 5.681-second E.T. at 258.67 mph. No. 3 Rowe put his brand-new Rick Jones-built car into the No. 3 starting spot. Chuck Little drove his Dan Page car to No. 6, behind the son-father tandem of Steven and Jim Whiteley. Kenny Lang and Billy Glidden made the field at Nos. 13 and 14, respectively.

Molinari said the competition is stiff. “It’s tough,” he said, recognizing a Pro Mod racer must endure two races at each event – qualifying and eliminations. “No. 16 can win as easy as No. 1. The whole objective is to get in the field,” the S&T Truck Repair owner from Battle Ground, Wash., said.

That certainly was true at Orlando. Bob Rahaim, a two-time winner and three-time top qualifier, was among the best in testing with 5.80-second times, missed the cut at No. 19.

Had Pro-Line’s Eric Dillard, crew chief Steve Petty, and driver Jose Gonzalez chosen to compete, the order could have been scrambled and the results different. The brand-new “El General” Chevy Camaro was so quick and fast that the ProLine brain trust decided to save it for the Gatornationals and avoid risking any possible damage. They withdrew it from competition. (Pro-Line also is affiliated with Molinari, Michael Biehle, Frigo, and Montana racer Derek Menholt. Three-time, reigning, and recently retired Troy Coughlin Sr. was a Pro-Line headliner.)

Ten cars took advantage early of the pre-event testing opportunity, and that increased to the 22 who competed for spots in the 16-car field.

Beyond those healthy numbers the other NHRA pro classes surely envy, the Pro Mod class has another staggering statistic. At least 17 more drivers who have been regulars in the series were absent from Orlando, many of them overseas at Doha, Qatar. Missing from the Florida scene were Khalid al-Balooshi, Mike Castellana, Jose Gonzalez, Chad Green, Rick Hord, Harry Hruska, “Stevie Fast” Jackson, Mike Janis, Chip King, Eric Latino, Brandon Pesz, Rickie Smith, Brandon Snider, Richie Stevens, Ruben Tetsoshvili, Todd Tutterow. No stranger to Pro Mod but rejoining the party will be Calgary’s Rick DiStefano, with his twin turbo ’70 Camaro. Talk is that Erica Enders and Lizzy Musi will race with the Pro Mods this season, as well.

Jackson was on hand at Orlando, not as a driver but rather in a support role for two-time and reigning NHRA Top Sportsman champion Jeffrey Barker. When Jackson won the Pro Mod finale Toyota Nationals last October at Las Vegas, he declared, “Next year is mine.” Later that night at the awards banquet, he took back his season-starting opinion that “I thought a bunch of you were a joke, to be honest with you.” Jackson said he concluded early on, “You guys are an awesome bunch.” And he still wants to be the best of all of them – and that’s a slew of them.

As of March 1, the Pro Mod class had 35 entries for the Amalie Oil Gatornationals, more than the Top Fuel and Funny Car classes combined – and nearly double those two nitro classes altogether. Put another way, the Pro Mod class could fill nearly two fields, while Top Fuel has attracted just 13 drivers, three dragsters short of a full grid, and Funny Car barely has enough to race a maximum 16.

(Surely both the Pro Stock and season-premiering Pro Stock Motorcycle class will gain some entries before the Gainesville race opens March 15. However, two weeks out, only a dozen have registered they’re coming in Pro Stock, and the bikes have just 11 racers.)

Molinari said of Pro Mod action, “This is the class people want to watch right now. There’s a variety of so many cars. I think there’s so many varieties of people – it’s not just John Force Racing and Don Schumacher Racing against each other. That’s what I think.”

And anyone who follows the series thinks this is going to be one intensely crazy year of competition.