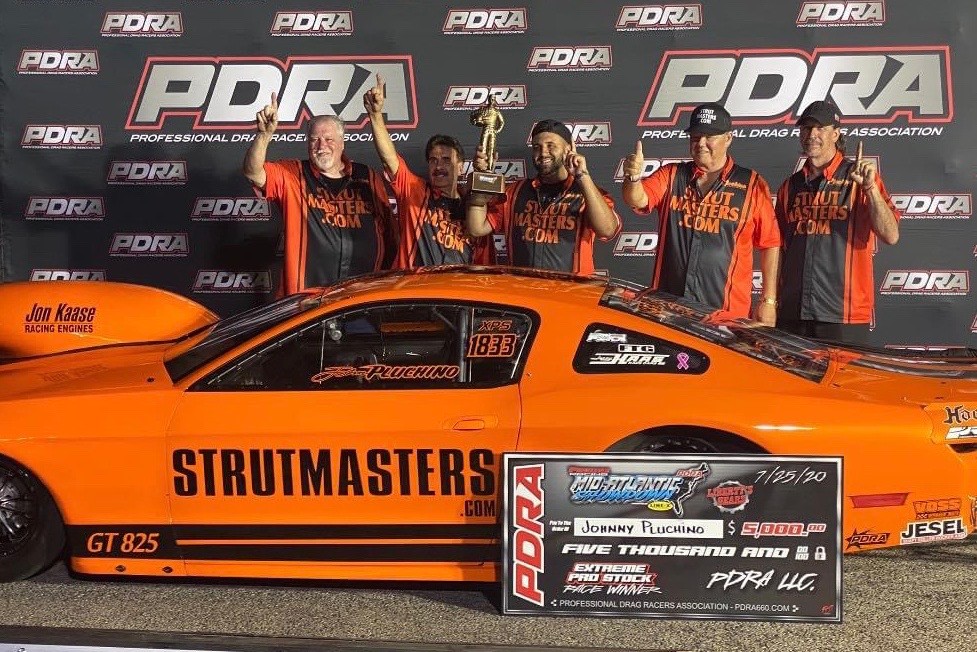 Johnny Pluchino’s quest for his first PDRA Extreme Pro Stock world championship received a major boost on July 25 when the second-generation driver scored his second event victory of the season at the PDRA Mid-Atlantic Showdown at Virginia Motorsports Park.

The win gives Pluchino extra confidence as he prepares for his first quarter-mile NHRA Mountain Motor Pro Stock race of 2020 at the NHRA Indy Nationals, Aug. 6-9.

“This is just another brick in the road to the championship,” said Pluchino, a two-time PDRA Pro Outlaw 632 world champion. “It's one race at a time. You keep stacking trophies, you'll get a big one at the end of the year. That's the goal.”

After bowing out in the semifinals at the PDRA Carolina Showdown in June, Pluchino started looking for ways to step up his performance at Virginia. He found what he needed during a prerace test session in his Kaase-powered Strutmasters.com ’13 Mustang.

“Me and Dad loaded up and went to GALOT [Motorsports Park] two weeks ago and made a couple runs on a 140-degree racetrack,” Pluchino said. “We bolted Voss wheelie bars on it and tried a couple things to fix it early, make it a little better and it worked. We came out to Virginia, didn't even test, and we were fast.”

Pluchino flexed the performance gains he found during qualifying and eliminations. He qualified No. 2 in the eight-car field, then recorded a 4.10 at 177.23 and 4.099 at 176.65 to defeat Elijah Morton and John DeFlorian Jr., respectively.

Low qualifier and Carolina Showdown winner JR Carr was waiting for Pluchino in the final round. Ready for battle, Pluchino left the starting line first with a .018 reaction time and held the lead through the eighth-mile finish line. His 4.079 at 177.14 defeated Carr’s 4.323 at 163.08.

“I was .050 and .039 on the bulbs the rounds before,” Pluchino said. “A guy like [Carr] makes you step up, makes you let the clutch out a little sooner. You expect him to make a killer run. I said if I'm going to win, it's probably gonna have to be on a holeshot. You do what you've gotta do.”

Strutmasters.com founder Chip Lofton was at the race to enjoy the win with Pluchino and his father, 2016 PDRA Extreme Pro Stock world champion John Pluchino, and the Pluchino Racing team.

“It was great to have Chip there for another win,” Pluchino said. “I always thank my sponsors, but I have to thank my team here. They're a bad group.”

With two wins in three races, Pluchino is confident in both his abilities as a driver, as well as his car’s performance in the eighth-mile series. He’ll put that combination to the test in quarter-mile competition in a couple weeks at the NHRA Indy race.

“We have probably the best car we’ve had in a long time, we just need to go another 660 feet,” Pluchino said. “Hopefully that success translates over. We’re really confident in the car we have, and I feel like I’m hitting my stride as a driver inside the car as well. Last year, I was also still driving the 632 car. As much as I didn’t like to admit it at the time, I don’t think I was able to drive the Mountain Motor car as well when I was driving both. This year, I’ve really fine-tuned my driving and we have a really good car. I feel like the Strutmasters team is one of the favorites to hold the Wally on Sunday.”

With hot summer conditions expected at the NHRA Indy Nationals, Pluchino feels his Mustang has an advantage after making several strong runs in hot conditions recently.

“We feel good in the heat, we feel good in the cold, and if Hoosier came up with a snow tire, we’d feel good in the snow,” Pluchino said. “We really feel we have a good handle on it. We saw 140-degree tracks at GALOT and Virginia and the car didn’t stumble one bit over the heat. It’s important to have a tuneup in all areas. I think we’re well-rounded right now.”