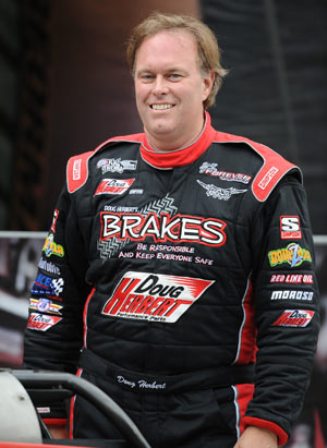 Herbert, from Lincolnton, N.C., raced in Top Fuel from 1992 to 2009. He won 10 national events in 28 career final round appearances. Herbert broke through multiple performance barriers in Top Fuel as well. He was the first driver to run in the 4.80-second range with a 4.880 at the 1992 Winternationals in Pomona, Calif. In 1993, he became only the second driver to exceed 300 mph (301.60) and the first to run that fast during eliminations.

“It’s a real honor for me to serve as grand marshal for the NHRA Summernationals at Raceway Park,” Herbert said. “I’ve got 25 years of great memories racing at Englishtown, and in addition to seeing all my friends in the area, we’ll also be announcing the return of the B.R.A.K.E.S. teen driving school to the track. We held our first school in Englishtown back in April and the response was fantastic, so with the support of Raceway Park and the New Jersey Motor Vehicle Commission, we’re coming back in October and several more times next year. Together, we’re going to make New Jersey roads safer for everyone.”

In 2008, Herbert suffered every parent’s worst nightmare – the loss of his two sons, 17-year-old Jon and 12-year-old James, in a car crash. Out of that terrible personal tragedy Herbert created the 501(c)(3) non-profit B.R.A.K.E.S. (Be Responsible And Keep Everyone Safe) Teen Pro-Active Driving School.

In the past eight years, more than 20,000 teens from 31 states and three countries have graduated from B.R.A.K.E.S.’ intensive half-day training course, which is free of charge and features hands-on skills exercises taught by professional instructors in a fleet of new vehicles donated by Kia Motors America. The course maintains a low three-to-one student-to-instructor ratio and requires at least one parent to attend with each teen.

B.R.A.K.E.S. has seen tremendous success and according to a recent study, B.R.A.K.E.S. graduates are 64 percent less likely to be in a crash in their first three years of driving. For more information or to register for a school, visit www.putonthebrakes.org.