MILLICAN, KLOEBER REUNITED WITH OLD DRAGSTERS BUILT AHEAD OF THEIR TIME 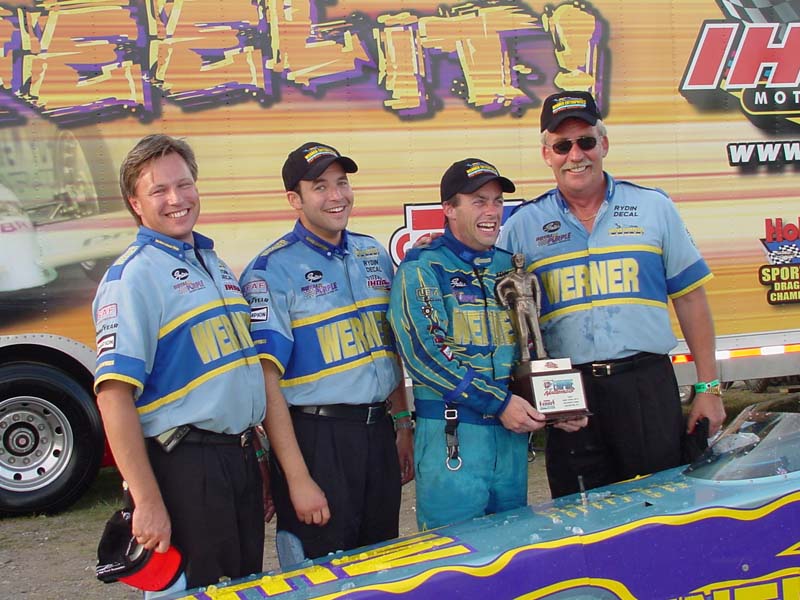 Clay Millican and Mike Kloeber hadn’t laid eyes on a pair of old friends for more than 13 years when they were reunited in McLeansboro, Ill., as autumn 2019 approached.

Yet when each racer walked into the room and saw those with whom they had enjoyed record-breaking performances, it was almost as if they’d never been apart.

Those ‘friends’ were the Top Fuel dragsters campaigned by Millican, Kloeber, and their team in 2001 and 2002 -- vehicles they won the first of what would eventually be six consecutive IHRA Top Fuel crowns.

But not since 2006 had Millican and Kloeber actually seen those cars, run their hands across the frame, engine and wing struts, and, in Millican’s case, actually slid back into the driver’s seat. The dragsters had spent more than 15 years in a massive museum at the headquarters of Werner Enterprises in Omaha, Neb. The blue Werner-sponsored entries were iconic cars of the decade, regardless of sanctioning body, and they showed up in victory lane at IHRA events a whopping 50 times.

The team earned such renown that Millican was chosen to appear on the cover of his hometown phone book in Tennessee.

When Millican and Kloeber last saw the cars in ’06, they were part of a massive in-house museum at the trucking company’s headquarters; behind glass, in fact.

“They had the first and second cars we won championships with,” Kloeber said. “There was even a ‘driver’ beside them, fully dressed: driver’s suit, helmet, a fake Clay Millican waving to the crowd and all that.”

But Werner, in the midst of a remodeling of its facility, decided that its renovation plans wouldn’t include the 25-foot-long vehicles, and Millican was asked if he could find a new home for them. His answer was something like, ‘Don’t let them go! Don’t let them get away! Those are near and dear!’ 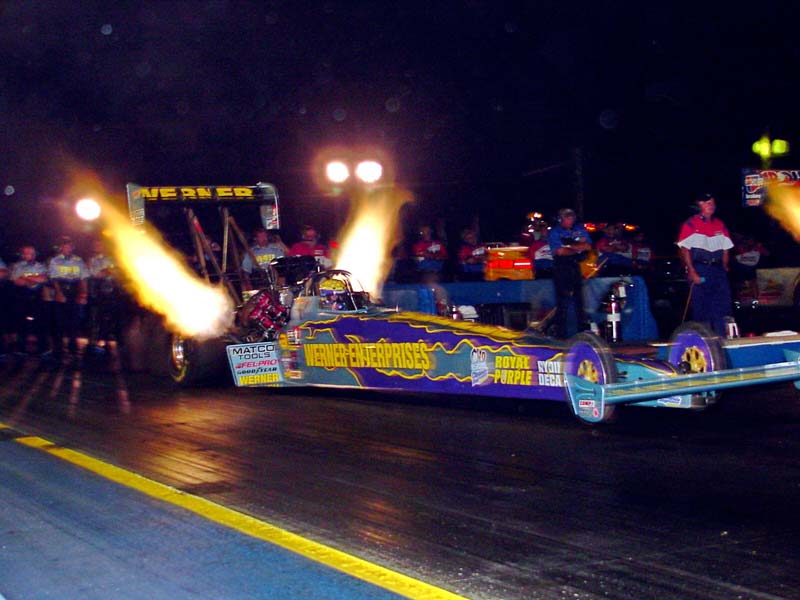 One the Werner dragsters is being dusted off and “spit-shined,” as Millican put it, before it is transported to the Don Garlits Museum of Drag Racing in Ocala, Fla. The eventual fate of the other car is still undecided, said Kloeber, who added that he’d be pleased to see it find a home at a motorsports museum in Wilsonville, Ore.

Millican saw the dragsters before Kloeber had a chance to once they arrived at the Stringer Performance headquarters in Illinois. Millican was moved, to say the least.

“Awwwwww, man, it just made me start grinning,” Millican said. “It did not take long before I hopped in the seat and sat there, looking around and thinking, ‘Man, this feels so familiar.’

“It was a little bit strange because that was before the days of seat inserts. We just had a carbon fiber bucket in there for a seat, but it still felt just like home. There was no Racepak dash to look at it, just a piece of carbon fiber with a couple of gauges in it. I could have literally hopped in there without any thought and made a run, no doubt.”

Millican’s been able to unearth the mind-boggling record of the 2002 car built by Hadman Chassis.

That particular piece was the No. 1 qualifier at 11 of IHRA’s 12 national events that season. But that was only the beginning: Millican won 11 of those 12 races, falling short only in a tire-smoking, first-round duel against Jack Ostrander at Budds Creek, Md.

A close inspection of both dragsters brought memories flooding back for Millican and Kloeber, the crew chief throughout that dominating IHRA run and again his crew chief this past year and in 2020 for team owner Doug Stringer.

“I’ve been able to tell all my current crew guys all the innovative things we did 20 years ago with Clay’s dragsters. Some of that stuff, I don’t think they believed me,” Kloeber said. “We did a lot of things that have since become standard. For instance, had extra protection on the rollcage when nobody else did because of the cockpit intrusion.”

That event occurred at Rockingham (N.C.) Dragway and Kloeber was curious as to what had gone wrong with the car after a scintillating launch.

“It’s on a great run, chassis arching -- and he shut it off. So I get on the radio and ask, ‘Why’d you shut off?’ “Kloeber recalled. “He said, ‘It broke the blower pulley.’ I asked him how he could know that because he’s sitting 3 feet in front of the engine. He said, ‘Because it’s in my lap!”

By the time Kloeber and the team’s tow vehicle had reached the top end, the PTS safety/rescue crew was walking the track, flashlights illuminated in a search for debris. Millican was standing by the car, his firesuit’s top half-peeled down and its arms knotted around his waist.

“But he didn’t have his Nomex shirt on, and blood’s running down his back,” Kloeber said. “The pulley piece went through the suit and cut him. The blower driveshaft was still bolted to the blower pulley, but it was a ‘barber pole fracture,’ so it was sharp and jagged and pointy. When it left the blower, it was going about 11,000 RPM”

Before the team left its shop for the next race, Kloeber had installed a titanium safety plate on the backside of the rollcage for protection from the shoulders down. Some two years later, after the death of Darrell Russell from cockpit-intrusion injuries, NHRA ordered all teams to install a full plate to reached the top of the cage. 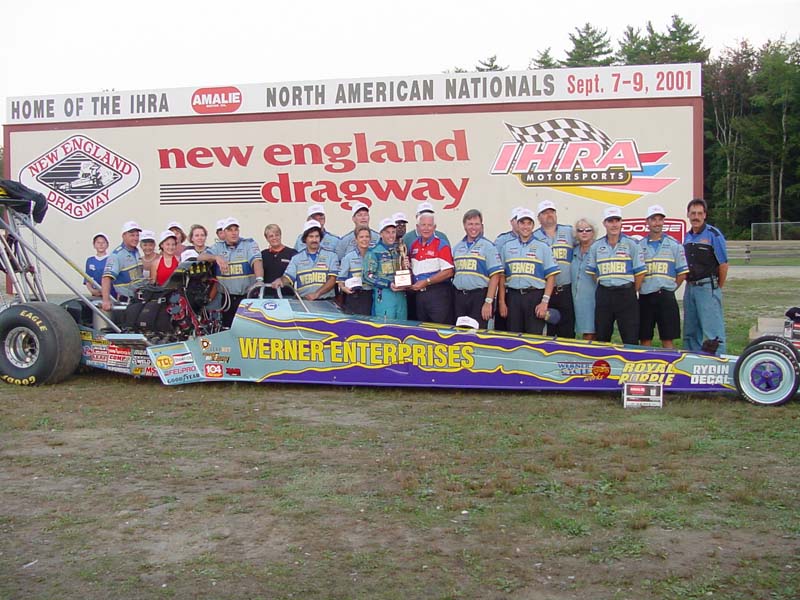 When Millican saw that dragster a few months ago, he noticed a particular set of scratches on the chassis and driver’s seat. He snapped a photo with his phone, sent it to Kloeber, and asked if the shot rang a bell.

“It took me about 10 seconds, but then I realized it was the permanent marks to the chassis from that deal at Rockingham,” Kloeber said.

Another innovation was the addition of a belly pan and side panels to the car’s back half. Those were crafted and installed to deal with strict penalties IHRA had put in place to deal with track oildowns.

“We did everything we could think of to keep oil off the racetrack so that if we did hurt the engine, we wouldn’t get an oildown penalty,” Kloeber said. “I still think we did a better job on that Werner bodywork than the carbon fiber stuff people put out today.”

NHRA didn’t look kindly on that particular upgrade and ordered Kloeber to uninstall it.

“They thought of it as ground effects or whatever,” Millican said, “but the bellypan eventually became an NHRA rule.”

Even so, Millican said there was some initial animosity toward him until the sport’s teams got accustomed to dealing with the new piece in their maintenance between rounds of competition.

“I had the nickname of ‘Clay Bellypan’ for a while after that,” he said.

Only a few upgrades would be needed to bring the 2001-02 cars in compliance to compete in the upcoming season, Kloeber said.

“But if we had to, they’re current enough where we could back-half them and make them legal. We’d probably have to add a couple of more tubes in the front where there’s an additional crossmember now, but other than that, they’re pretty much the same as what we’re running today.

“Seeing those cars again was just like seeing an old friend you hadn’t seen in a while.”