LIFE IS GOOD FOR LUIGI 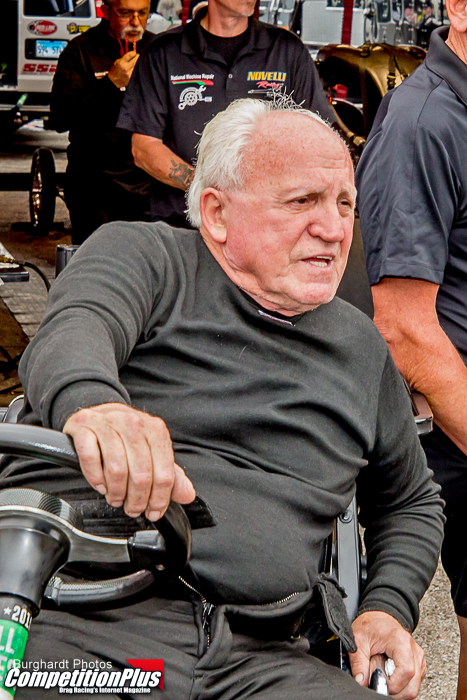 Luigi Novelli has no real complaints. Business is strong at his National Machine Repair shop at Crete, Ill., just south of Chicago. Evidently plenty of massive mechanical and hydraulic presses are breaking down with enough frequency to keep the longtime drag racer – and his Top Fuel car – fed. At age 77, he’s still wrestling with heavy equipment, such as one with a 58,000-pound flywheel that he serviced last month.

And even though he – along with Pat Dakin, Cameron Ferré, and Lex Joon – didn’t qualify at the NHRA U.S. Nationals back on Labor Day Weekend, Novelli was at peace.

Novelli, known as “The Rodfather” and recognized for years by his long, braided ponytail, did describe his life as “crazy.” The ponytail is gone, sacrificed because he reached a performance goal – officially. Truth be told, Novelli said, “I can tell you – I got sick of combing and braiding. Then on the weekend when you race, you sweat like a dog, and it smells. You’ve got to have it [tied] up. By the end of the day, cut if off, that’s it.”

Yes, life for Luigi Novelli is crazy but good.

He nodded his head at his dragster that builder Murf McKinney recently front-halved and said, “This is one crazy part.” Novelli, who divorced after 49 years of marriage, denied he was going steady these days with his dragster. Teased that the car was his girlfriend, Novelli shot back, “That’s not the only one!” With a wink, he said, “You’ve got to get in trouble a little. You can’t live in a cocoon, right?”

He recalled that in 1980, the final year that the Top Fuel class had a 32-car bracket, it also had 103 entrants. And the entire qualifying procedure, the atmosphere, was completely different than today’s regimented one.

“You never did this,” Novelli said, glancing around the pits, where teams had their designated workspaces with expensive awnings and hospitality “suites.” He said when he first started competing in the U.S. Nationals, in 1967, “you made a run – you got back in line. You serviced your car in line. But you didn’t have to do hardly anything: run the valves, change the oil, cool the clutch. You got enough time to check on the bearings. That’s what we used to do.”

Novelli has been drag racing for more than a half-century, starting with a ’53 Ford A-Gasser in 1962. He moved to an A-Fuel Altered, then in the mid-1960s to a ’33 Austin Bantam with a 392 blown Hemi. By the end of that decade, he was racing a front-engine dragster that he built, using a 392 Chrysler Hemi he salvaged from a car that was headed to a junkyard.

Times have changed. And despite the fact he’s still in the Top Fuel mix, Novelli said, “We don’t belong here. Well, we do and we don’t. We qualify and we do good. Then we get in the middle of the race and we’re all out of parts.”

He said the sponsorship race and big money came into the sport and that has “made it impossible.” He called that new era “the beginning of the end.” He said, “It’s not peaches and cream. When Tony Schumacher doesn’t have a ride, something’s screwy.”

But he has no immediate plans to walk away from this sport he has loved for so long. He said, “I’ve only got 20 years to go.”

In the meantime, he’ll keep working on broken mechanical and hydraulic presses and on his nitromethane-burning race car. He said the machines in his 9-to-5 line of work are “dangerous if you don’t pay attention.” Is the dragster a piece of cake after working with huge machines? “They both can kill you,” he said nonchalantly.

Neither has yet. So for Luigi Novelli, life is good.