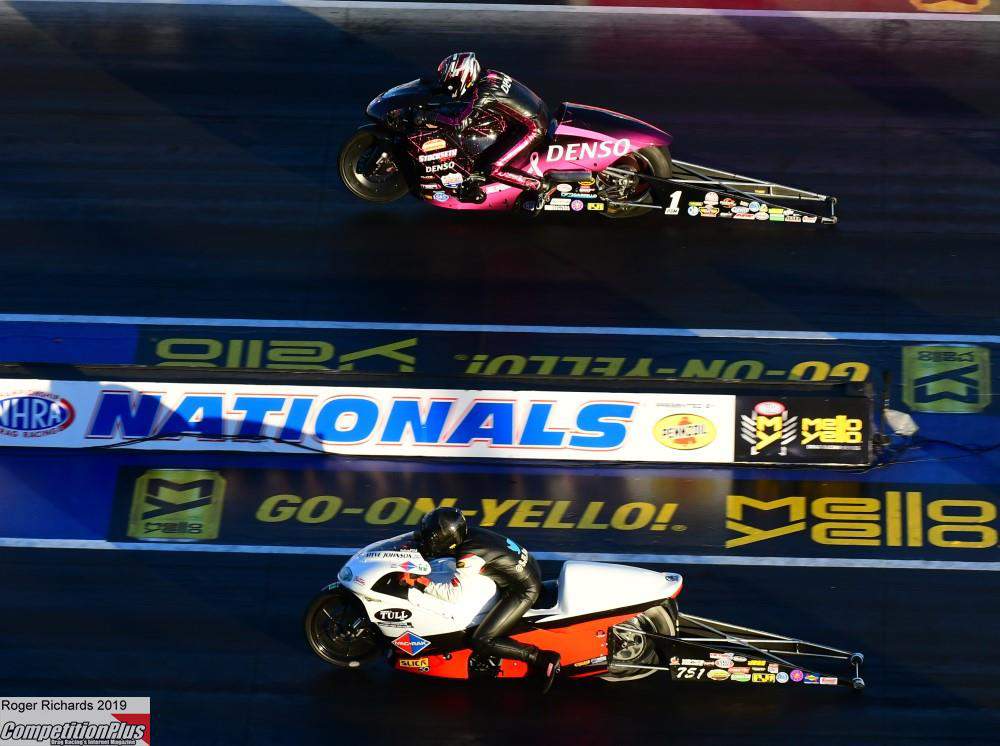 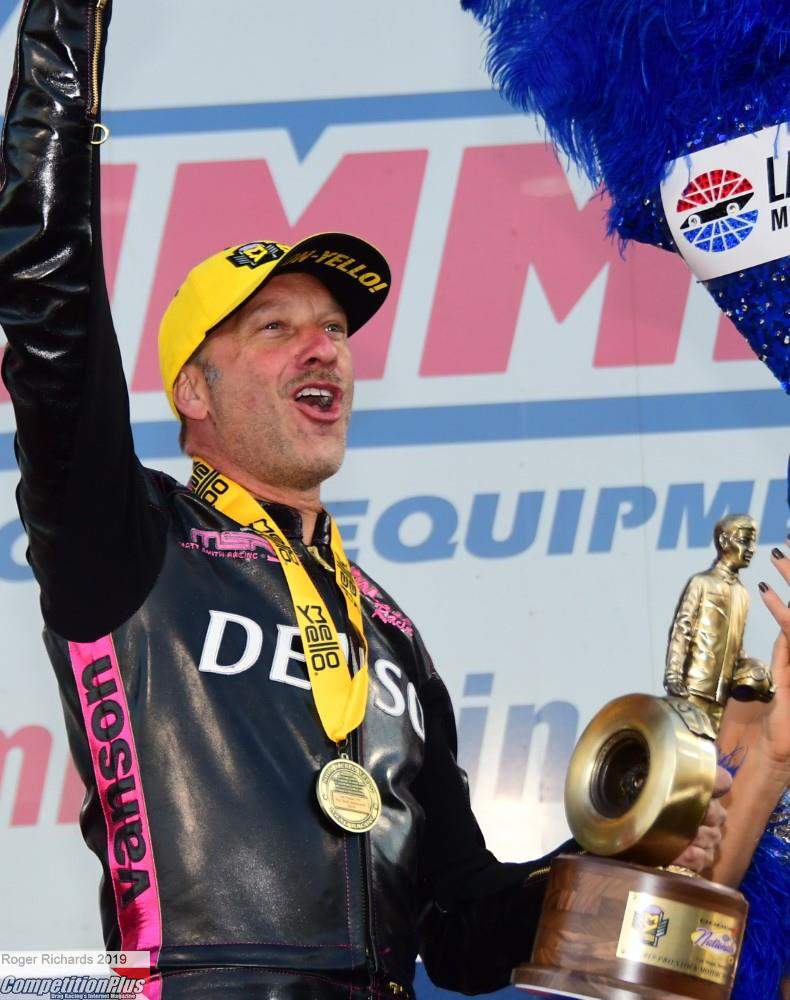 Just when the chirping started to die down between NHRA Pro Stock Motorcycle veterans Steve Johnson and Matt Smith about “hobby racers” and whether Suzuki bikes could be as competitive as Harley-Davidson and Buells, their final-round showdown Sunday at Las Vegas – which Smith won – started another round.

Up until Sunday, Johnson had been on the offensive, insulted at Smith’s labeling of some of his Pro Stock Motorcycle colleagues as “hobby racers” with fulltime jobs away from their bike teams versus “professional racers” who have no other source of income and who work at nothing but perfecting their racing programs.

Smith urged Johnson in a public battle carried out on social media and at the racetrack to focus on making his Suzuki the best it can be and reassuring Johnson that his brand can be competitive. Johnson took his advice, stepped up his program, toned down the verbal banter, and has started to excel during the Countdown to the Championship. As the No. 2 qualifier at Las Vegas, he met No. 1 qualifier Smith in the final round. After winning, Smith playfully dredged up the rivalry.

After earning just his second victory of this season, the reigning and three-time series champion gave these parting remarks to the media Sunday: “Suzuki has had the best bike this whole Countdown this year. Between Jerry [Savoie], Karen [Stoffer], and Steve, I mean, they've had the dominant bikes. The V-Twins are a little bit behind, and we just pulled it off. I mean, it was close: [6.]85 to [6.]86. That's a heck of a race. We just did our job – and isn't that the way it's supposed to go? A professional's supposed to win the race, right?”

That’s a topic for another day. The major focus for Smith is what he might be able to accomplish in two weeks at the Auto Club Finals at Pomona, Calif., where the maximum points a racer can earn (with the points-and-a-half system in effect) is 190.

The picture for the last-chance effort has Andrew Hines in the lead with a trio of contenders in tow who are within two points of each other No. 2 Jerry Savoie (a two-time Countdown winner and victor at the U.S. Nationals) is 115 points off the pace, and No. 3 Eddie Krawiec is 116 away from a fifth championship. Smith moved up from fifth place in the standings to fourth, cutting Hines’ advantage over him from 167 to 117. Karen Stoffer fell from second to fifth but trails Smith by only seven points. 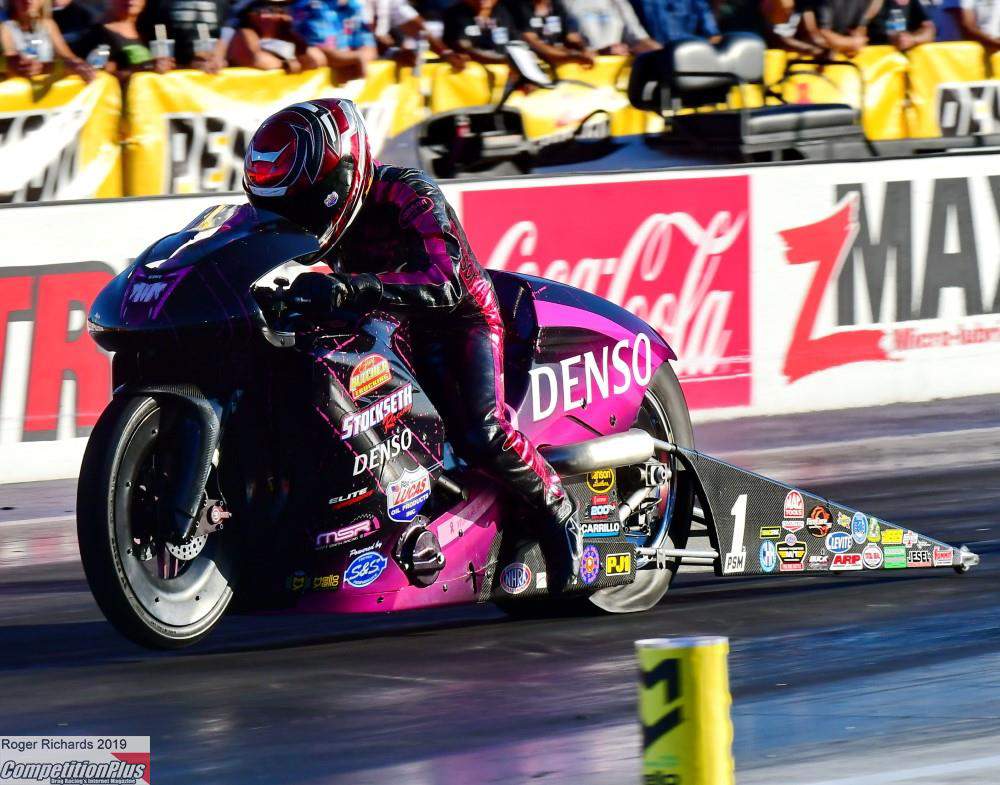 Smith said his semifinal match-up Sunday against Hines was pivotal.

“I was aware of that,” Smith said. “It's disappointing that Jerry [Savoie] didn't put him out second round to give us all a better shot. All in all, we took it in our own hands and did it, and then it's not totally over yet. It's not mathematically over, but he's got a pretty big dagger in it. We're going to do our best to try to pair up against him in the first round and knock him out.”

Actually, the 24-time winner had so much going on all throughout race day that it’s hard to imagine he would want to wind up Johnson. One would think all he wanted to do would be have a beer or take a nap or both.

“Race day was kind of hectic,” Smith said. “I kind of messed up first round. I didn't let the clutch go when I was supposed to and kind of pogo'd the bike when it left. We got the round win over Katie [Sullivan], but second round I had to run my wife, and I did my job, went .020-something on the tree, and ran a good number.

“Come back, had to run Andrew [points leader Hines] in the semis, and when we got back to the pits, I told her, ‘Download my run while I checked on Scotty's bike. I hear him hollering the bike’s on fire.’ A piece of the carbon fiber got against the main wiring harness and caught the bike on fire. I had to cut eight pieces of wire and strip it and piece it back together, and we didn't have time to start the bike up. Luckily the bike started up. We did a burnout and beat Andrew in the semis and went on to race Steve in the finals,” he said. “Can't say enough about my guys, just our team, the Denso, Lucas Oil, Mark Stockseth, everybody who helps me, Greg Butcher. I couldn't do without them.”

He acknowledged that Johnson “had a little bit better bike all day long, by a hundredth, two-hundredths every round. I told everybody, ‘We're going to shoot for the moon in the finals, like we did in qualifying and you know, it stuck. We went 1.04 in 60 foot and everybody knows I have the best bike from the eighth-mile to the finish line. It's just, we have not been successful down low this year. When it's stuck, there's nobody going to catch us when we run like that.”

He got some pushback from his own bike in the final round. He said it “was shutting down about 80-90 miles an hour. The bike got in a tank slap with me. Luckily, it didn't pitch me off but we just, the steer dampener just come a little loose . . . celebrating a little bit too much and it just happened. All in all, it's all good. We'll fix that for Pomona.”

But does he have the tools to claim a fourth total and second straight Pro Stock Motorcycle championship?