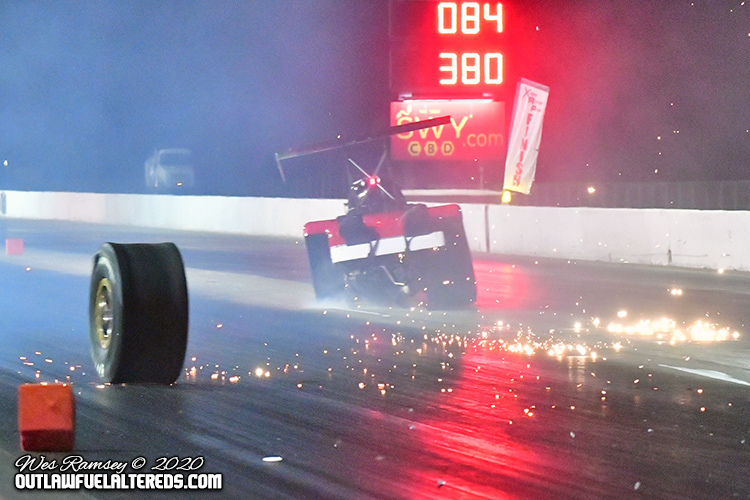 Like most, members and fans of the Outlaw Fuel Altered Association were just thankful for the ability to get some racing completed during 2020. It was a four-race effort this season for the Good Vibrations Motorsports OFAA Championship series, presented by Lone Star Forklift. This marked the 24th consecutive season for the group, which has stood the test of time and remains the main attraction for fans across Texas, Oklahoma, and Missouri. The start was delayed until May, but once the pipes were lit it was business as usual. 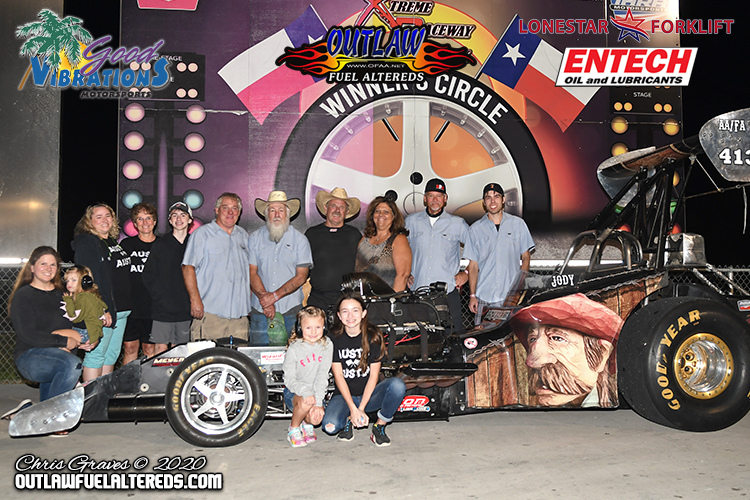 At the May 23rd season opener hosted by held at Xtreme Raceway Park in Ferris, Texas, Jody Austin and team “BushWhacker” got the winning started by defeating Donny McSwain’s “Wild One” with a 3.82 to a 4.00.  Going rounds was a trend we’d see more of from Austin and company as the season progressed. The next stop on tour brought the series back to Mo-Kan Dragway in Asbury, Missouri for the first time in five years and again it was Austin in the final round, this time facing veteran and multi-time series Champion Jimmy Jones. Jones’ “Texas Tremor” was forced to shut off with a leak on the starting line and Austin took the solo to victory earning more precious points before heading to a summer break in the schedule.

Racing resumed Labor Day weekend as the Outlaw Fuel Altereds rolled into Ardmore Dragway in Ardmore, Oklahoma, to headline their annual Hot Rod Reunion event. Austin’s win streak ended in the semifinals while Aaron Morrow wheeled Terry Darby’s “Nitro Relapse” entry to the last dance against Raymond Dawson in the “High Octane” entry. Morrow took this one with a 3.83 to a 3.95, which set the stage for what looked to be an epic three-way points battle to conclude the season between Austin, Morrow and Jones.

September 18th and 19th the series returned to Xtreme Raceway Park in Ferris, Texas, for the two-day Championship Finals event. Coming into competition, only sixteen points separated number one Austin from number three Jones, with Morrow comfortably in second within striking distance. With two rounds of qualifying on tap for Friday night, the pressure was on, but by the end of the night, things would look a lot different for Morrow and Jones.

Morrow’s troubles started right off the bat with engine troubles on his first pass which slowed him to a 4.40 and the damage sustained prevented him from making the call for the second session, losing those valuable points and qualifying a disappointing tenth in the twelve car field. For Jones, it was worse, as on his first pass the car went into tire shake and suddenly shot across the centerline, simultaneously shooting the left side rear slick out from under the car, sending it down the track with sparks flying into the night sky.

Jones walked away under his own power and was uninjured in the incident, but his efforts at the Championship Finals were over. Morrow and team, led by car owner Terry Darby, thrashed to get their engine repaired for Saturday's first round of eliminations, but the odds were stacked against them. Despite a strong effort, Morrow’s troubles continued with major engine damage in his winning semifinal match. Meanwhile, Austin had clinched the title by winning his first round pairing over Rick Lewelling, then defeated Donny McSwain in the semis to move into the finals against the “Magic Dragon” owned by Jody’s father Raymond Austin and driven by Mark Billington.

The season ended with a win by Billington, as Austin’s car went up in immediate tire smoke at the hit of the throttle, but not to worry, the championship was in the bag as Jody and his team celebrated their first Outlaw Fuel Altered Championship while father Raymond and driver Billington visited the winners circle with their win at the season finale.

2021 looks promising for the OFAA series as it heads into its historic 25th consecutive season of racing and with six events planned, should be a showdown to the end as Austin and team “BushWhacker” look to defend their title against a strong field of heavy-hitting winged warriors from across the southern states. A big thanks to series sponsors Good Vibrations Motorsports, Lone Star Forklift, Littlefield Blowers, Taylor Motorsports Products, Meyer Enterprises, Entech Oil and Precision Reprographics. Find out more about the series at www.ofaa.net.