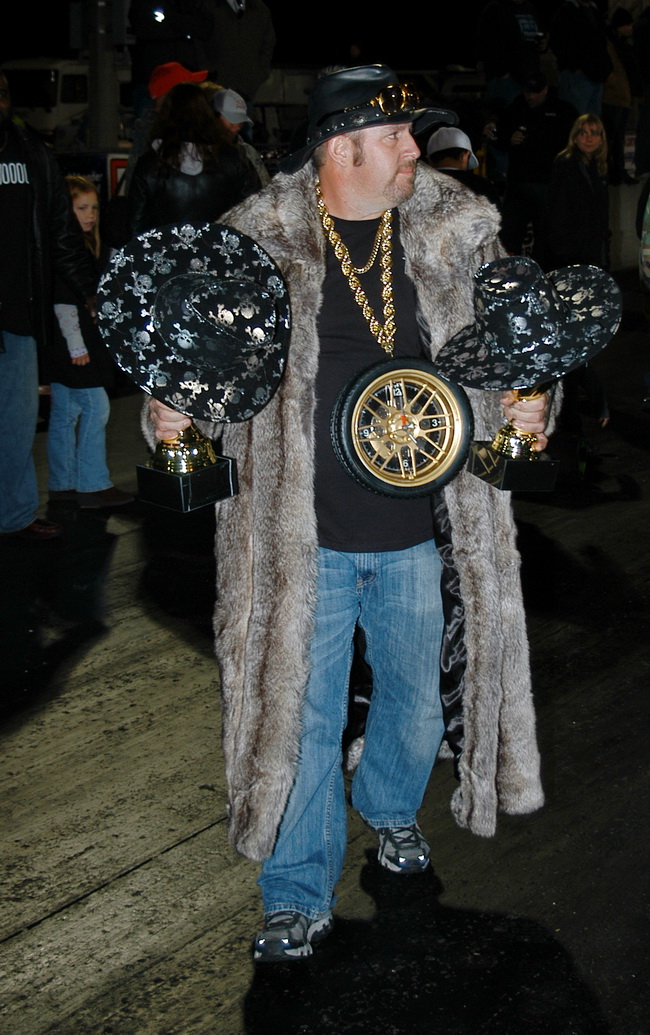 In the wake of Lights Out 9, the first of two annual drag radial celebrations he’s staged since 2011 at South Georgia Motorsports Park (SGMP), Donald “Duck” Long has precious little time to regroup. His sister event, No Mercy 8, isn’t scheduled until this fall, but Long is experimenting with a unique, limited-access third race this year, with his inaugural Sweet 16 going off Mar. 22-24, at the track just a few miles north of Valdosta, the southernmost city in Georgia.

Long awarded “Stevie Fast” Jackson a cool $50K Feb. 11, after he capped off Lights Out 9 with a final-round win over Keith Haney in Radial vs. the World, the 3.7-second, 200-mph headlining class for Duck’s events, which routinely draw 400-plus entries and well over 20,000 spectators each time weekend he visits SGMP. Ironically, it’s that kind of success that led Long to create a new, more intimate format for Sweet 16, one that not only drops the RvW qualified field from his traditional 32 to 16 cars, but makes it the lone official class (though 16 No Time grudge racers will battle it out, too), and even limits admission to a paltry 500 tickets sold.

“So this is the deal,” Duck explains, “I’m tired of putting on races where I can’t be involved and be out on the starting line, having a good time. Me and Lenco (Jim, Long’s longtime right-hand man), we don’t have time anymore to just mix it up with everyone. That’s why with this deal here, I wanted something to where I can throw on my fur coat, my hat, my sunglasses and chains, and Lenco can throw on his green jacket, and we can go out there and have a good time.”

As of the start of March, Long says he’d already sold more than 400 spectator tickets, mostly to race teams wanting to bring in extra crew members. He’s holding the remainder for late team purchases, but says he’ll probably release the final 20-30 tickets in a last-minute online sale. Regardless, he stresses, once they’re gone, they’re gone. “I’ve had a thousand people call about general admission, and I hate it, but we’re just not doing any general admission.” So it may be a tiny crowd watching a tiny group of racers in person, but in front of what Long hopes will set records for his online live streaming audience, the drama and excitement should be bigger than ever.

“It’ll pay a winner-take-all $101,000 for Radial vs. the World,” he declares. “When we first put that out there, people jumped all over it like an impulse buy kind of deal. We had like 60 people going, ‘We’re committed, man, we’re committed,’ but when you get right down to it, you’ve got about 35 guys that are really committed, you know, which is all the heavy hitters anyhow. So we’ve got about 35 of them and we’re pulling in 16 of the No Time guys, and that’s it. We’ll be looking at probably 50 or so race cars on the grounds and we’re not adding anything else.”

Both finalists from Lights Out 9 are expected to attend, plus RvW stars Barry Mitchell, Dwayne Mills, Mark Woodruff, Jamie Hancock and Daniel Pharris, among others. After testing on Thursday, there will be two rounds of qualifying that night, then five rounds of qualifying on Friday, and Saturday will feature eliminations for the Radial vs. the World Sweet 16, the No Time Sweet 16, and if enough RvW cars are available a 16-car RvW second-chance race that Long expects to pay up to $20,000 to the winner.

If that sounds like potential for a lot of downtime between rounds, Long promises online fans shouldn’t worry because he’s also putting together a stick-and-ball-like, big-game show involving trackside announcers Brian Lohnes, Lee Sebring, “Willie Dog” from the No Time crowd, himself and Lenco Jim, and perhaps a few surprise guests.

“We’ve got all kinds of different costumes for our announcers, a lot of cool stuff for Brian and Lee and Willie Dog, and we’ll have our booths set up out there close to the starting line. We want to interview the drivers when they come up, do all the top-end interview stuff, pit interviews, we’re wanting to have some fun with it. And honestly, I hope the pay per view does well, but I’m going to be honest with you, I don’t care if I make $10 or $10,000 off it; I’m going there to have a good time,” Long insists.

“I don’t want to deal with 4,700 golf carts, a thousand people parking cars in the fields; I don’t want to deal with any of that. I don’t want to have 20 security guards, I don’t want to take any cash at the gate, I don’t want to have to be worried about someone stealing money, nothing. That’s why we’re doing all ticket sales online, 500 total. There’ll be, total on the property, let’s just say maybe 700 people total on the whole property. And everybody’s going to have the same VIP status. Nobody has to worry about buying food, drinks; everything’s going to be in the VIP tent. You know, everything’s included in this deal. The only extra thing that we’re doing is if somebody wants to buy some event shirts, we’re going to do maybe 500 of those. But honestly, we’re going there to have a good time, to try to put on a good show and entertain people that are going to be tuning in.”

Beyond everyone having fun, though, Long reveals he also wants to shine a strong spotlight on the Radial vs. the World class because rumors sometimes pop up about drivers and team owners wanting to sell their cars simply because there is a limited number of truly good events for them to attend each year. “So we're trying to bring another elite race to them; that was the original goal,” he admits.

“But honestly, I also just want to see the baddest of the bad go down the absolute best track we can give them. We’ll have an hour, hour-and-a-half between rounds and I want Wade Rich to be able to just prep for RVW cars without worrying about anything else. I want to be able to go out there and get that right while we’re doing interviews, letting people get their cars cooled down and not have to be pressured into doing stuff.

“We’ve already got the money to pay everybody, all that’s a done deal. Now it’s just about going there and having a good time. And if the live feed goes great, then hey, that’s awesome. You know, if it doesn’t, then I’ve still done what I wanted to do and that’s go hang out with these guys one on one, share the camaraderie, have a good time with them, and you know, see them race. So yeah, it is a little different, but if we don’t try it we’ll never know if it can work or not. But I really think it will.”