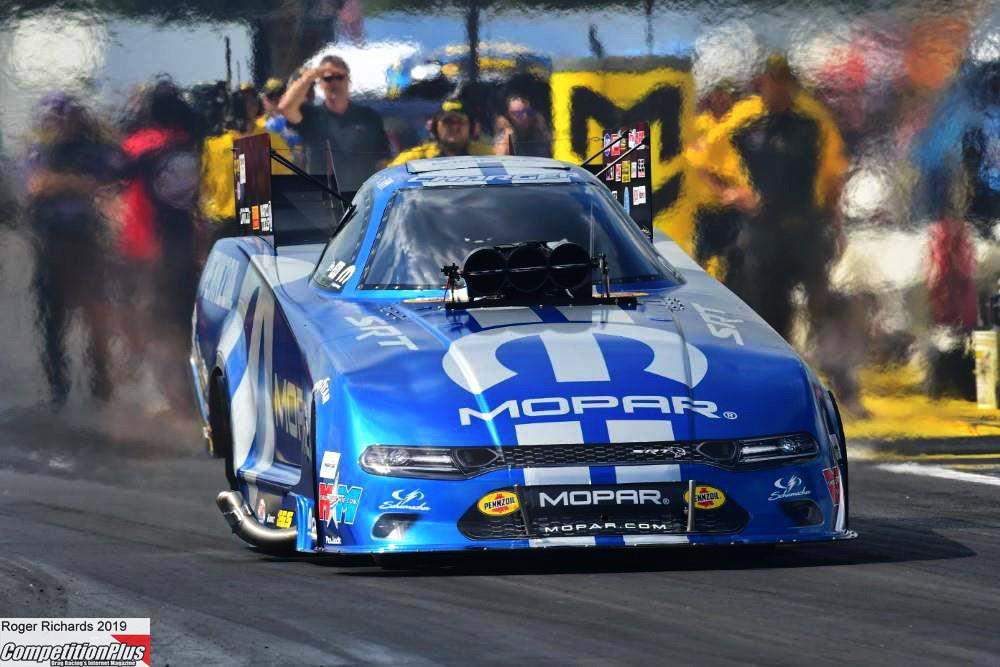 It has been a roller-coaster kind of year for Matt Hagan.

From a string of early season success that saw him as high as second in points, to a summer stretch of six first round losses in eight races, and back to the top again, Hagan is ready for a little consistency on the race track.

And he thinks he may have finally found it.

With two finals and a semifinal in the last four races, Hagan has once again found his foothold in the class and continued that momentum Friday at the 38th annual Lucas Oil NHRA Nationals as Hagan found himself sitting atop the Funny Car class at Brainerd International Raceway.

Hagan, who hasn’t secured a pole all year, put together the only run in the 3.80s on Friday with a very quick 3.890-second pass at 328.46 mph to grab the provisional top spot with two more runs on Saturday.

“We have a hell of a race car right now,” Hagan said. “We have just come off of some semifinals and finals on the Western Swing and, if you throw Denver out of the mix, we’ve had a great combo that has gone a lot of rounds.

“We just have a lot of confidence right now. We roll in here and have two great laps right off the bat. The car was digging early and had a lot of wheel speed and it washed out early, so you know it is on a good run. Dickie (Venables) has a lot of confidence in the combo that we’ve got and the window is a lot bigger right now.

“This is the momentum we need heading toward the Countdown. If we can make up a couple of points and a couple of rounds here, maybe we can move ourselves up to fifth or fourth or something like that. Right now we’ve got a really good shot at coming out here and hunting hard for this championship.”

Hagan was third quickest in session one before blasting to P1 in his second hit at the track in his Mopar-sponsored Dodge Hellcat Charger. Hagan’s Don Shumacher Racing teammate Jack Beckman was second on Friday with a 3.908 at 325.53 mph and current points leader Robert Hight was third with a 3.924 at 326.48 mph.

It was a brilliant run for Hagan who is seeking his first No. 1 qualifier in over a year.

“When you have fast wheel speed that early and it washes really hard and doesn’t come loose, you know (the crew chief) is getting all of it out there,” Hagan said. “As a driver you are just trying to pull it back into the groove. It is a fine line bringing it back and letting it settle into the groove. You are trying not to drive these cars too much, but in a Funny Car you have to drive them no matter what. I didn’t see the scoreboard, so I knew it was a good lap when I saw my guys and they were clapping and high fiving.”

After dipping as low as eighth in the NHRA Mello Yello Drag Racing Series standings, Hagan has used a string of solid runs to put himself back into the mix as he seeks to gather additional momentum with only two more races to go in the regular season.

“My confidence is huge right now,” Hagan said. “My lights have been great, the car is running well and the window that our crew chief has found now has opened so much more. The car is so forgiving that he can make wholesale changes and it is not such a razor blade that we are walking all of the time. He can miss a little here and there and the car still goes down the race track.

“I think that, for us and what I have seen these last three or four races coming off of that Epping win, we are just really getting everything where it is finally clicking and jiving and we have that ball now rolling in the right direction.

“This is one of the most exciting end-of-the-year finishes I have been a part of. A lot of times we start off really hot and then we kind of fizzle, but I think we are starting to peak at the right time. Right now we need to look at Sunday and try to win this race. But to have the confidence to be able to go up there and make two great runs on this race track, go down both lanes and have some good data to work off of both, I think is really good going into tomorrow.”