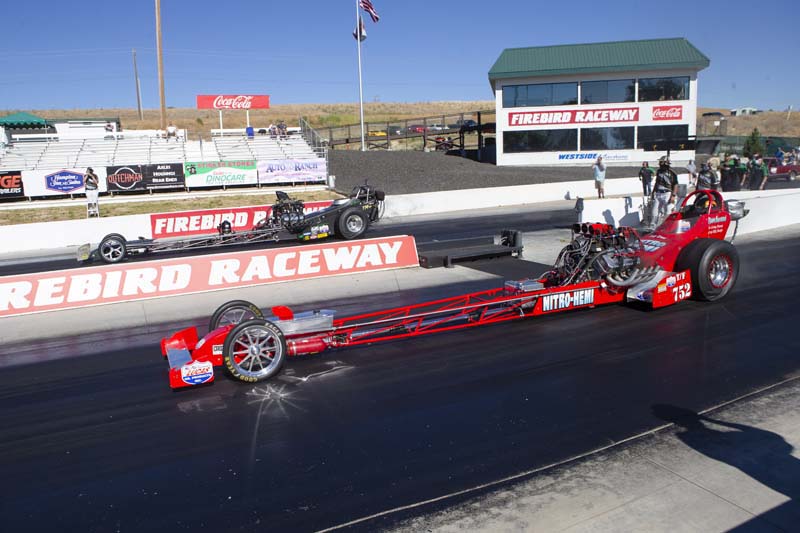 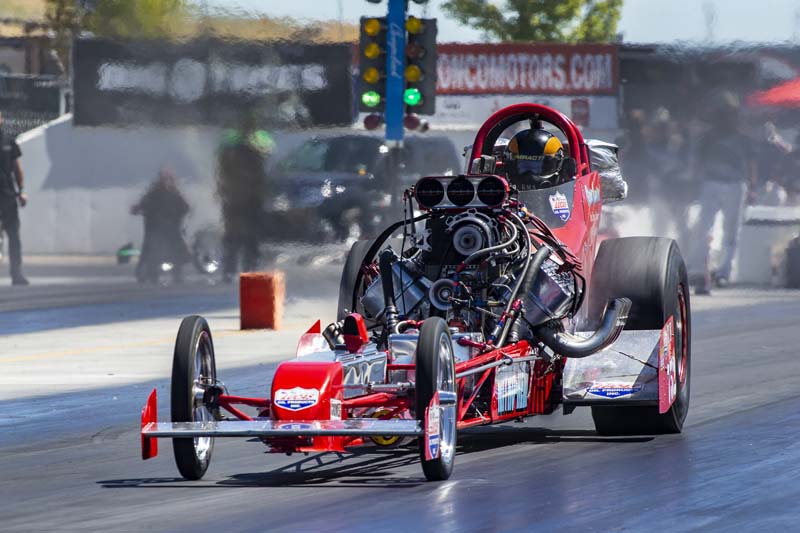 Six cars made the trip to Firebird Raceway in Boise, Idaho, for the annual Nightfire Nationals. Santa Rosa, California’s Jim Murphy led the field into eliminations. Murphy would face sentimental favorite Tyler Hilton in the family Chevy powered dragster. Murphy nearly had disaster happen as admittedly lost focus on the starting line and had a .228 light and was noticeable behind Hilton at halftrack. However, Murphy was able to overcome the lead and take the win. 5.77, 230.21 to cover the Ohio’s runners 5.99, 242.32 effort.

Then the surprises started. Number five qualifier Dusty Green, who was driving Steve Harwood’s Nitro Hemi entry, faced number two qualifier, Brett Williamson in Mike Fullers Forever Young. Harwood decided literally at the last moment to make the trip to Boise, and the team showed up about two hours before Q1 on Friday. According to Green we have very few spares, a few pistons and no heads, and the block in the car. They made the session on Friday ran a decent 5.88, 238.38 and went into wait mode.

Green left on Williamson, but Williamson drove around the red dragster and started to pull away, and then, surprise. Williamson’s engine pushed the burst panels out deploying the chutes and Green drives around the Gilroy, California driver, 6.07 -237.50 to 6.14-164.17. However, Green and team had to use a couple of their precious few spare parts to make the next round.

Round two saw Green and Hall match up, with low qualifier Murphy drawing the bye to the final. 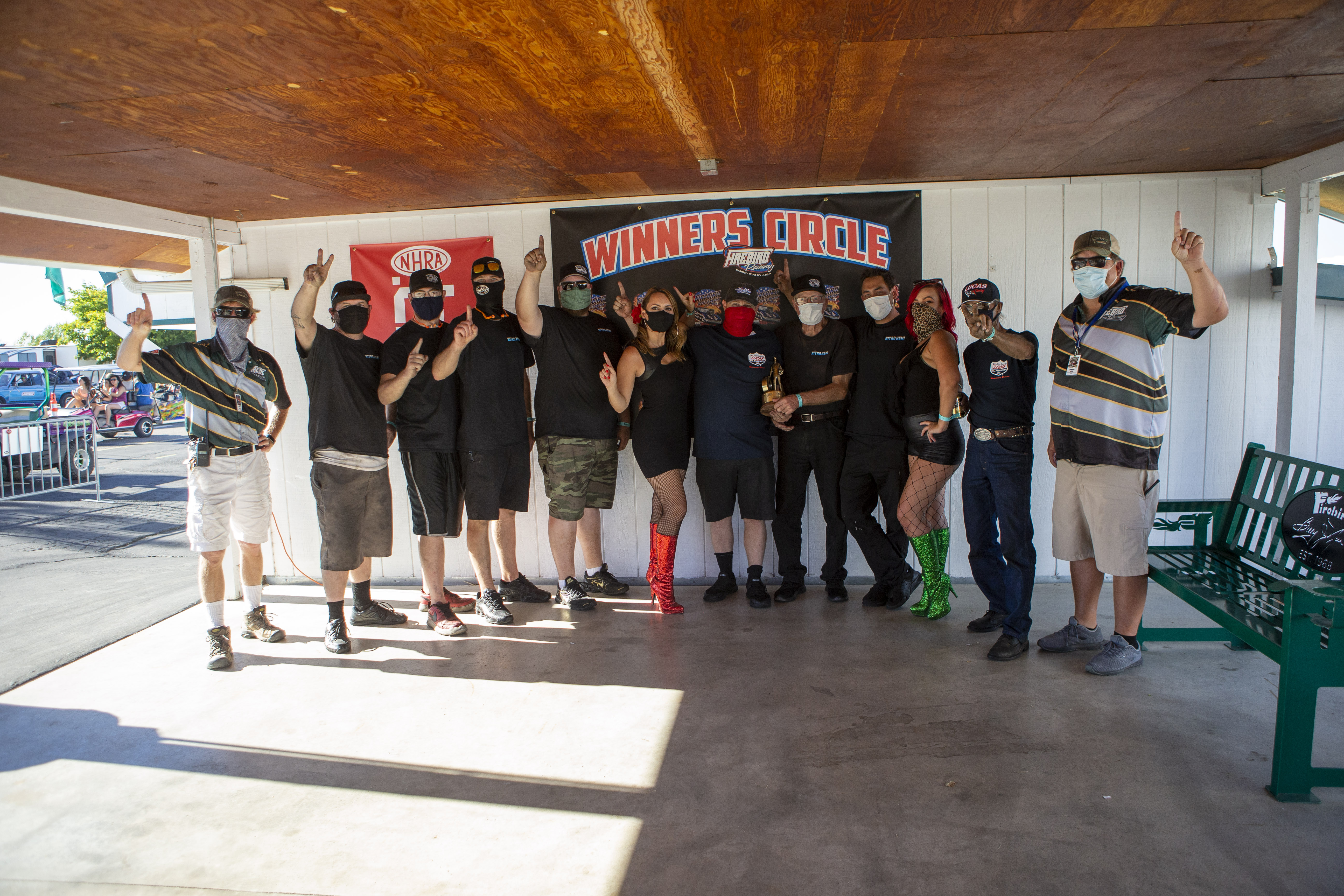 Murphy had been on a rail all weekend and in his bye round, surprise, he smoked the tires. “We tried something, and it didn’t work," Murphy said.

The final round would be a David versus Goliath affair. Green and Harwood, would have to face the giant in Murphy. Murphy was hyper focused on the starting line and was .014 as Green would be second to leave with a .079.

The victory is Green’s first as a driver. It would be Harwood’s second Nightfires win as a car owner.

The car Harwood owns is the former Jack Harris, Nitro Sheriff. Which had at least three other Nightfires victories when Harris owned it. 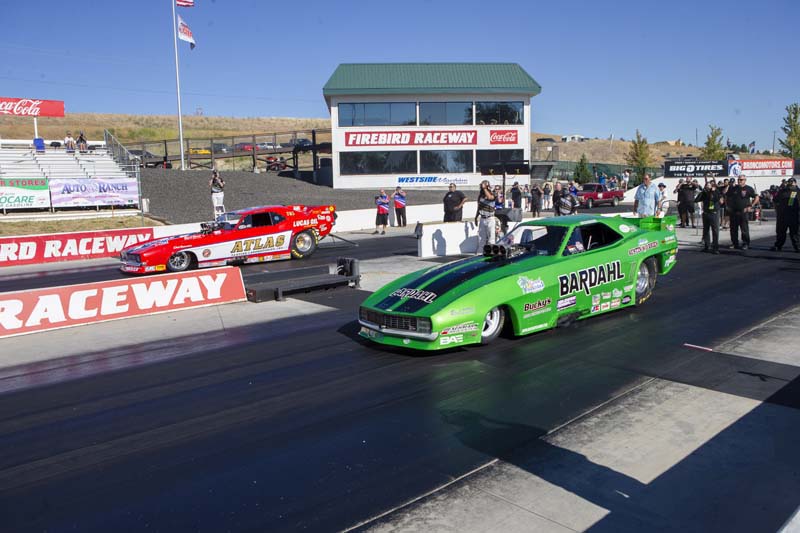 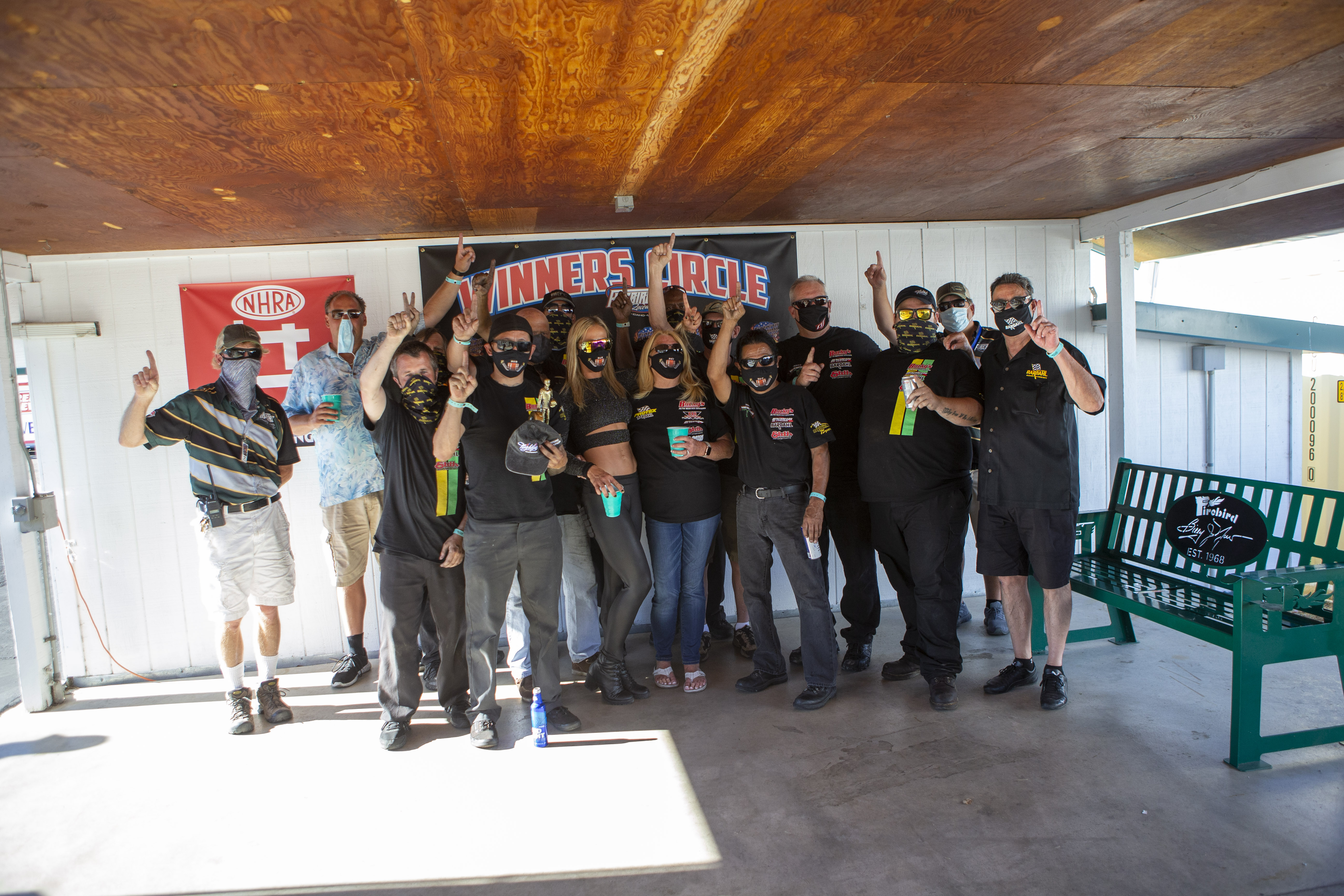 The surprise theme was not isolated to the long skinny cars, it was prevalent in the funny car fraternity as well.

It started in with the first pair out as number six qualifier Bobby Cottrell would take out number three Jeff Arend. Arend would have a .025 light however a couple of bad spark plugs slowed down the California Hustler and allowed Cottrell to squeak by at the stripe. 5.78, 249.03 to 5.86, 246.39.

Surprise number two qualifier Michael Peck would again raise some eyebrows as his 5.67-254.86 would cover James Day’s 5.82-244.83 The next pair would be number one qualifier Billy Morris and number eight qualifier Jerry Espeseth.

Espeseth upset Morris in a very crazy way. Morris left first with a .144 light, as Espeseth's comatose .269 light didn't have any adverse effects. However, for some reason Morris’ Problem Child Camaro was just that, and slowed to a 5.82-244.83 and watched Espeseth streak away with a 5.69-252.33.

The final pair of round one saw Tony Jurado take out Geoff Monise who experienced some mechanical issues on the starting line. Round two saw Cottrell and Peck match up. Again surprise, Cottrell was solid on the starting line and ran a very solid 5.79, 252.66 as Peck double stepped the throttle and red lighted. 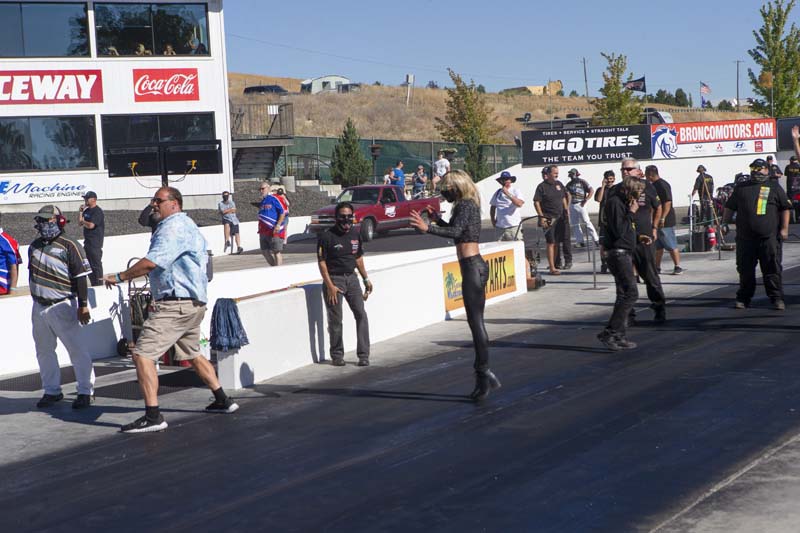 The other pair found number eight qualifier Espeseth facing number four Jurado. Espeseth was pulling into the pre approach area with Jurado nowhere in sight. Then Jurado and team where hauling the mail down the staging lanes to make the call. However, it as all for not as a rear main seal would fail on the burnout, and Jurado would be shut off. It wasn’t smooth sailing for Espeseth either as when he left the starting line the crew forgot the throttle stop and then the parachute pack fell off the back of the car.

In the final it was the battle of two '69 Camaros; Espeseth’s old school and the other the swoopy Victory Race Cars body driven by Cottrell. 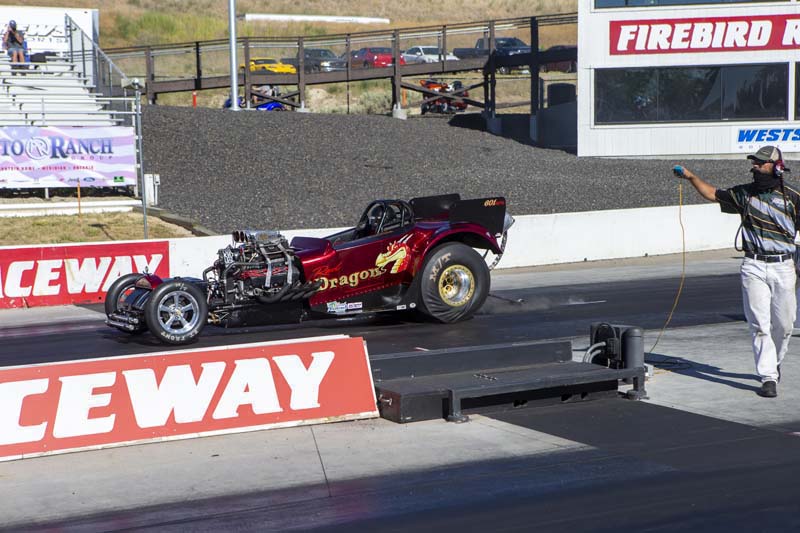 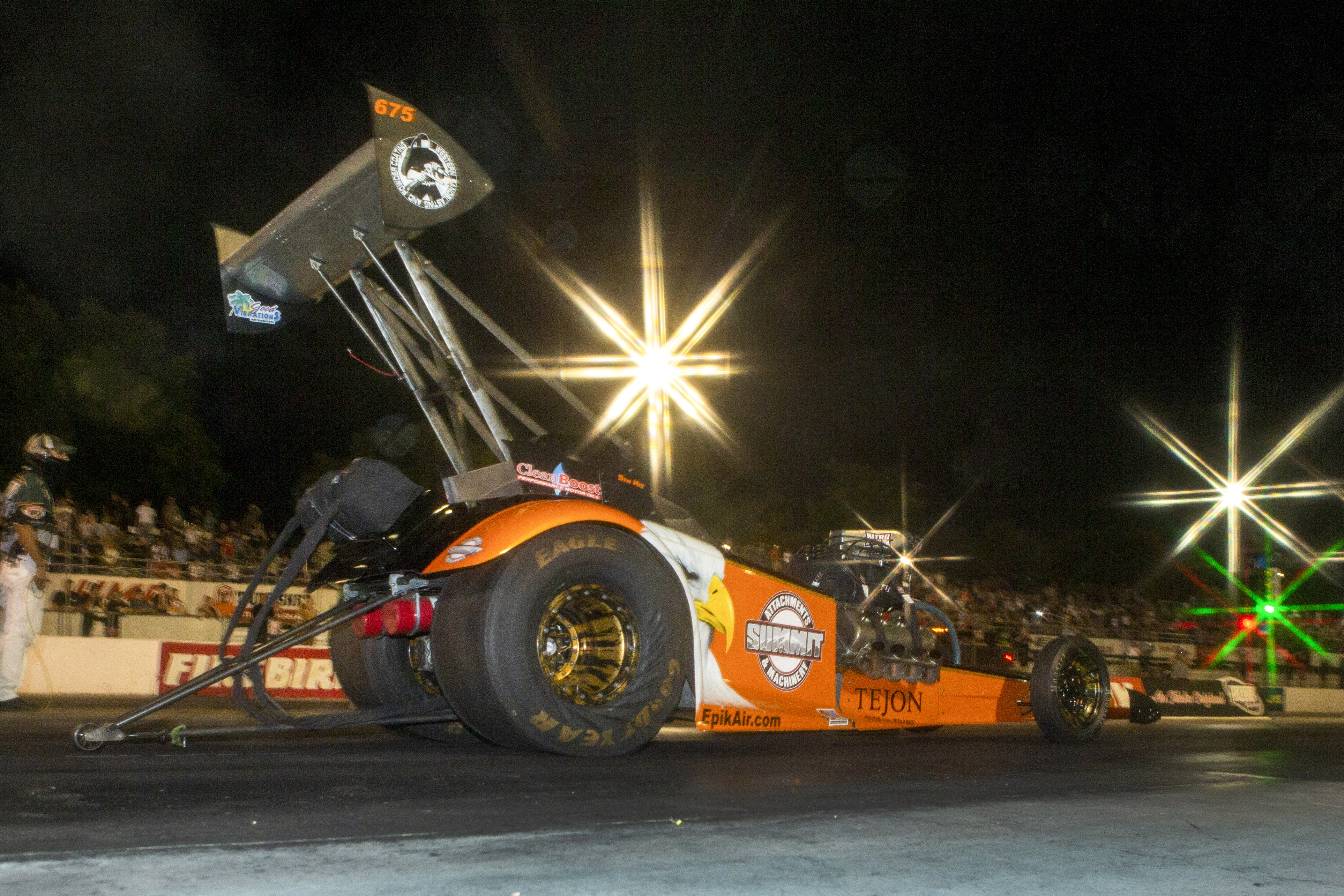 Eight fuel altereds showed up to compete for four slots in the six-second index contest.

Tom Padilla who was the number one qualifier was to face David Benjamin in round one. However, Benjamin had mechanical issues, which allowed for Dan Hix to take his spot. In a weird twist of fate and what appeared to be a quick tree Padilla was first to leave with a .166 reaction time. While Hix was a surprising .263 both cars cleared the light at 6.04 with Padilla taking the win with a speed of 221.38 while Hix went booming by his opponent just past the finish line at 243.11 miles per hour.

Number two qualifier Jason Pettit would take on the legendary Bradford family altered with Randy Bradford at the keyboard. This was one of those wild and wacky fuel altered races with Pettit prevailing 6.87-201.70, to cover the Camano Island, Washington driver 7.06-208.10 In the final it would pit number one Padilla versus number two Pettit. Unfortunately for Pettit it was over before it began as it appears there was issues with the injector or barrel valve causing the idle to be very high and he was forced to shut off, leaving Padilla to take the win 6.19-223.47

There was a nice number of cars, and a very responsible crowd who followed the directions set forth by the state to ensure the event went off smoothly.