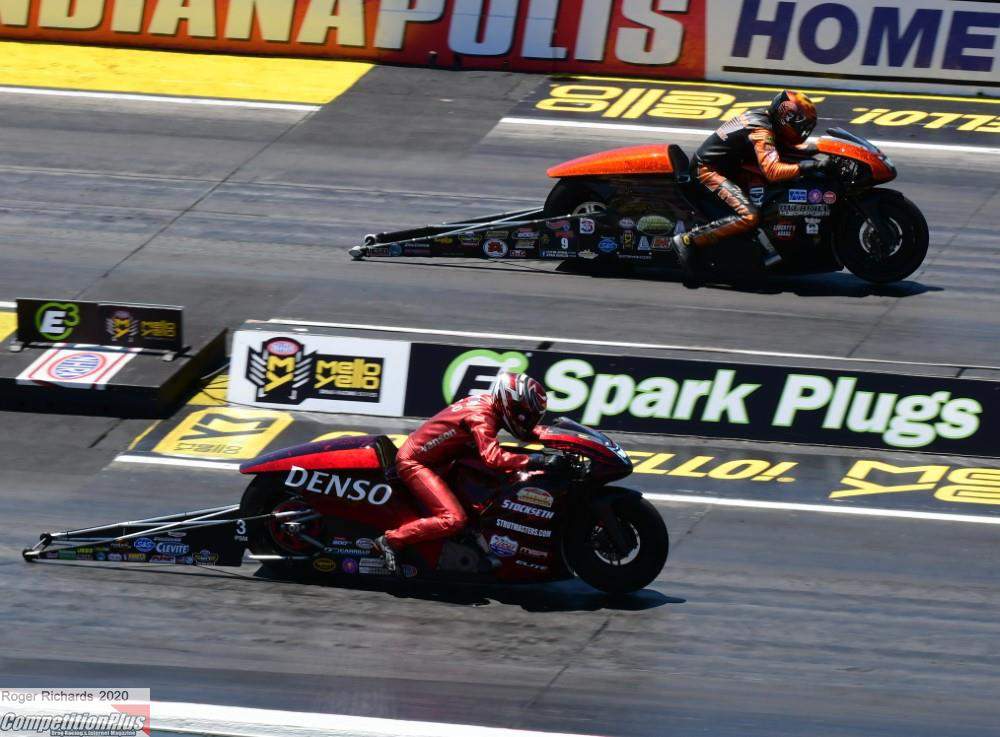 Having all of your career firsts come at the first race of the season following an eight-month gap between races brought on by a worldwide pandemic causing unprecedented change and disruption? Check. 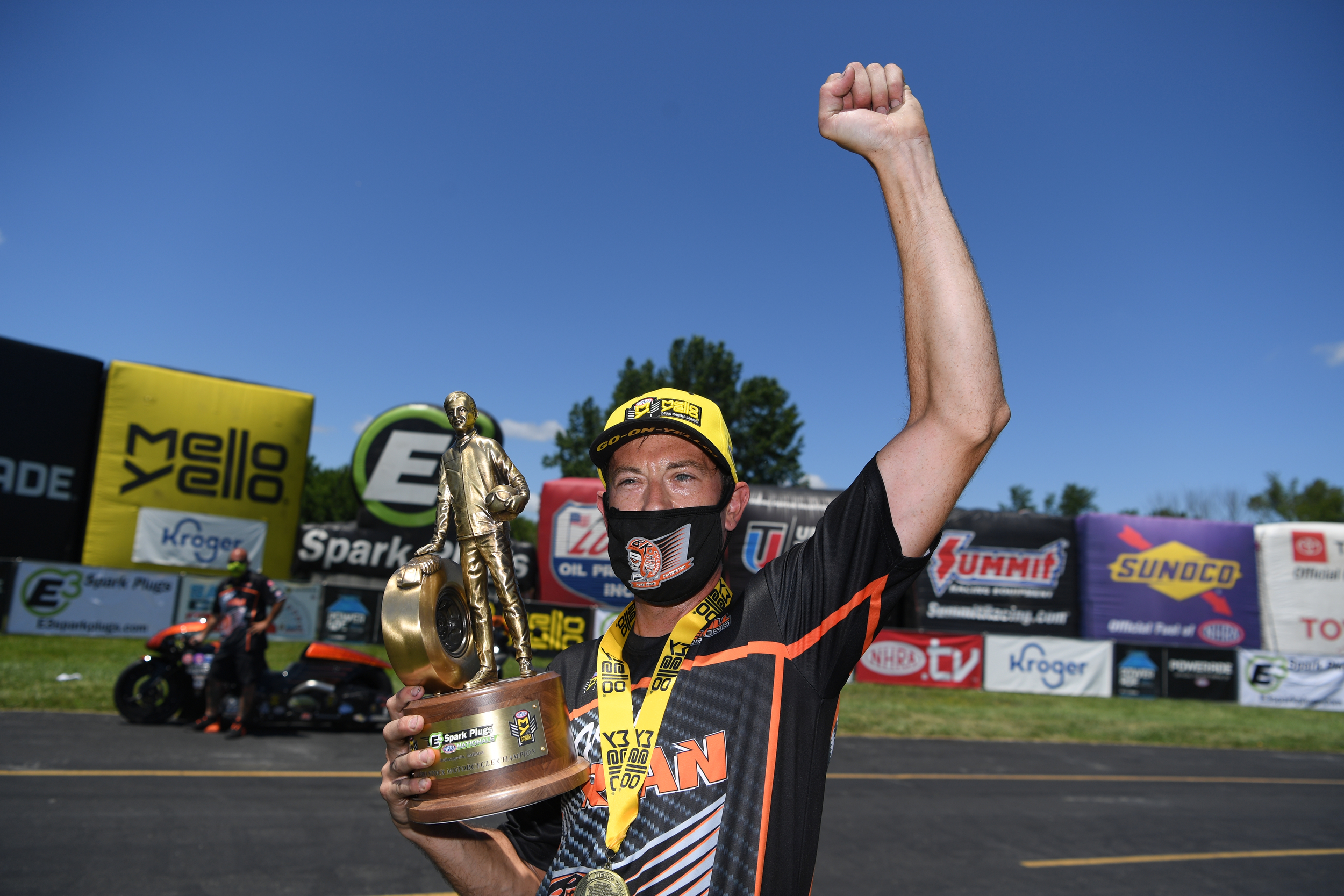 Coming into his third season of NHRA Pro Stock Motorcycle competition excited for big things, Ryan Oehler never could have imagined that things would turn out the way they have. Just hours from turning a tire in his first round of competition in 2020 at the Gatornationals back in March, the season was indefinitely delayed due to the onset of the COVID-19 pandemic.

That meant packing things up and entering into a wait-and-see approach for the rest of the year.

But four months removed from that decision and eight months since the season finale back in November, the teams were finally able to get back out on track. And that led to an upset win by a truly underdog team in the first race of the year for the two-wheel category at the E3 Spark Plugs NHRA Nationals at Lucas Oil Raceway.

“Man, this feels good. I can’t tell you how hard we have worked for this,” an ecstatic Oehler said. “We have put in the hours. Every week, every day, my dad is in the shop seven days a week, 12 hours a day, working on our engine program. And I’m out here working my butt off with our team and my wife. And we just have so much support for our team because everyone knows we’re the underdogs.

“Well, the underdog showed up today and whooped some butt!”

Oehler matched up with three-time Pro Stock Motorcycle champion Matt Smith in Sunday’s final and used up everything in his “luck jar,” as he called it, with a string of lucky breaks in the deciding round.

Oehler entered the matchup with clutch issues that led to his bike rolling out from under him, forcing him to adjust on the fly. But the young rider made it work, posting an .010 reaction time and cruising to a 6.974-second pass at 194.16 mph aboard his EBR to earn his first career victory. Smith, on the other hand, saw his bike bog down at the hit as he limped across the stripe with a 10.126 at 83.38 mph.

“That was an epic final. When we left the pit, Terry (Sutton) told me that the clutch was a little out. I assured him it was fine, but when we got up to the line, as soon as it starts, it starts dragging me out of the water,” Oehler said. “I knew if I was going to even remotely have a chance at beating Matt, I had to wait until the very last second to go on the two-step. And it did pull me, it was trying to pull me through the lights, but we pulled it off.”

Of course, the final was not the first time Oehler was lucky on Sunday.

After qualifying fifth on Saturday, Oehler faced an eventful afternoon from start to finish. It started out innocently enough, with Oehler outmatching Marc Ingwersen in round one with his quickest pass of the weekend - a 6.921 at 196.33 mph - but it only got more difficult from there.

In round two Oehler was simply outmatched against Scotty Pollachek, but a red light from Pollacheck by one-thousandth of a second negated a much quicker and faster run. In the semifinal, Oehler outpaced Hector Arana Jr. with a close 6.901 to a 6.984 to advance the young rider to his first career final.

Matt Smith had wins over Chris Bostick, Angelle Sampey and Andrew Hines to make his first final of the year.

“We have had literally zero luck in the last few years. So when Scotty (Pollacheck) runs that 6.85 with a double-zero-one red light while I’ve gone the wrong way on the tuneup, I thought that is the first time that we’ve gotten lucky in the last couple of years we’ve been out here,” Oehler said. “At that point, I said, ‘well, now it’s up to me.’ And then we went and ran Hector Arana Jr. and laid down a good, solid pass with low ET of that round and things are looking up.

“Then knowing that we had that trouble with the clutch and knowing it was trying to drag me through the lights, I thought now my luck jar is empty. Then Matt had a little trouble. I mean, that’s luck right there. But I think you have to have a little bit of luck to win these races. These are tough people out here.”

With a tiny, family-run team, Oehler credits the hard work of his family and team members for Sunday’s win, led by his father who puts the power into their engine program.

“We really laid it down this weekend. We came in and we tried to strategically plan what we had going,” Oehler said. “We had three motors we brought. We had A motor, B motor, C motor. We came in and tested with C motor thinking that C motor would be good to knock the dust off. The next day we put the A motor in and we made one hit on Friday and everyone was wondering what was wrong, why did we make just one hit? We kept that motor back and it worked perfect all weekend. I mean, we got a little bit of luck, but we haven’t had any luck in the last few years so I think we were due.”

So with the first win behind them, how will the team celebrate? Carefully. Afterall, we are in the middle of a pandemic, right?

“Hey, I won in a pandemic,” Oehler exclaimed. “We went to go test at South Georgia when this all broke loose and everyone was a little nervous, telling us it is dangerous. I said, ‘I am about to go 200 miles-per-hour on a motorcycle. I really don’t think I’m too worried about it.’ This is certainly a serious thing. We’ve all got to protect ourselves and keep everyone safe, but at the same time we’re drag racers. We love the thrill and that is for real as well.”