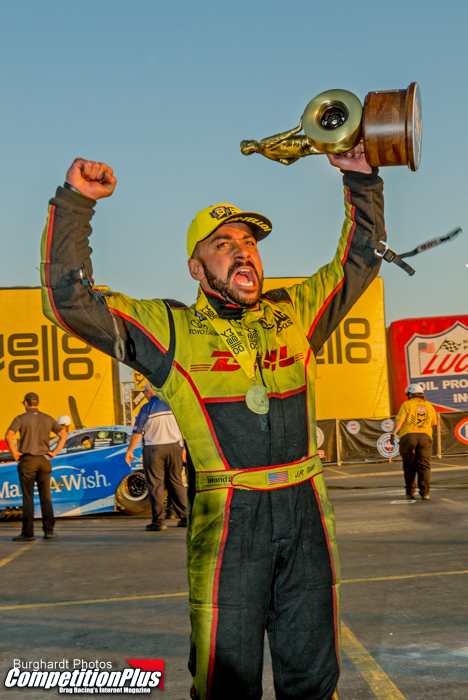 It has been a career that would make even the most stoic of individuals feel like giving up.

Bouncing from one ride to another, watching as often-times less talented individuals advanced up the ladder while you sat helpless from the sidelines, you wouldn’t have faulted J.R. Todd for giving up on his dreams of driving in the big leagues and settling into a regular 9-to-5, watching others do what he felt he was always destined to do.

But he never did.

Despite watching one promising opportunity after another dry up due to lack of funding, or teams folding, or even an entire race shop burning to the ground, Todd kept with it and on Sunday, was rewarded with the sport's ultimate prize.

Nearly two decades removed from jumping straight into Top Fuel from the Junior Dragster ranks as an 18-year-old fresh out of high school, Todd claimed an NHRA Mello Yello Drag Racing Series championship on Sunday behind the wheel of the famed DHL Toyota Camry Funny Car for legendary owner Connie Kalitta. It was the kind of result you typically read about in cheesy sports-themed movie scripts, but on Sunday it became a reality as Todd’s perseverance and passion for the sport of drag racing finally paid off with a result straight out of Hollywood.

“This is what you live your whole life for when you start racing Junior Dragsters at 10-years old. You hope that you can get to this point in your life and your career, but you never really think it is going to happen,” an elated Todd said. “There were definitely some tough times when I got my start with Top Fuel, and I didn’t know that I would ever be back at this point. I have so many people to thank, especially the Kalitta group as a whole. They have your back no matter what.”

Todd capped a dream season with a win Sunday at the 54th annual Auto Club NHRA Finals at Auto Club Raceway at Pomona. He defeated Tommy Johnson Jr. in the final on Sunday, but the championship was actually decided much earlier in the day.

In what was billed as a showdown between two of the best Funny Car drivers in the sport today, defending champion Robert Hight, needing to go three rounds further than Todd to claim back-to-back championships, saw his title hopes literally go up in smoke when he lost traction during his first-round matchup with Bob Tasca, knocking him out of championship contention and handing the title to Todd. Todd then went on to add wins over Jim Campbell, Tasca, Ron Capps and, eventually, Johnson in the DHL Toyota Camry Funny Car to earn the title and the Wally.

“Seeing Robert smoke the tires was instant relief. You hate to wish bad things on anybody, but that was just instant relief. I was trying not to show it, but it was definitely a stressful time between Las Vegas and when we got here,” Todd said. “The DHL Toyota guys are great at what they do. Todd Smith and Jon Oberhofer really have a handle on the tune-up. They were almost calling their shots today. They just have a really good handle on the car, racing smart. The Yella Fellas just do a great job of preparing our Camry. They definitely stayed focused with a lot of distractions around our pit area.”

Todd concludes a whirlwind season with six total wins in 2018, two more than any other Funny Car driver, with eight final round visits. He also added one No. 1 qualifier this season, but it was on Sunday where this team really made its mark.

Todd bounced around the championship standings during the regular season, winning three times in the season’s first 18 races all while dipping as low as ninth and as high as first in the points. But it was a dominant weekend at the sport’s biggest race that really set the course for the team’s championship run.

Todd swept the Chevrolet Performance U.S. Nationals – his second-straight win at Indianapolis – to garner plenty of momentum heading into the Countdown to the Championship. From there, Todd took over the points lead with a win the following weekend in Reading. Finally, in a battle that saw Todd and Hight trade the lead a handful of times, Todd took the lead for good following a victory at Las Vegas, giving the team three wins and four total final round visits in the six-race Countdown.

“It was at Brainerd when things really turned around for us,” Todd said. “My crew chiefs Todd Smith and Jon Oberhofer hit on something there. We carried that into Indy and won the race. We just stuck with that basic set-up and they’ve done a really good job of maintaining it.”

Todd led the category in both event wins and round wins in 2018, collecting a sterling 44-18 round record over the 24-race schedule.

Since switching to the flopper class at the beginning of last year, Todd now has eight Funny Car wins, each coming in the last 34 races. Overall he has 17 career triumphs in Mello Yello Drag Racing Series nitro competition. And it was the switch to Funny Car that provided, perhaps, the biggest joy on Sunday as Todd proved a number of doubters wrong that said he couldn’t be successful in the class.

“In my opinion, Funny Car is the toughest category in our form of motorsports. I grew up idolizing guys like John Force. It’s still surreal to me that I’m racing against guys like Force and Ron Capps. Then getting text messages from guys like Gary Scelzi and Snake (Don Prudhomme) and Kenny Bernstein,” Todd said. “To me, when you win any Funny Car event, you feel like you’ve accomplished a major milestone. It’s really cool to do.

“I understand why (people questioned me). I questioned myself last year if I could drive one of these things. My big thing is I was carrying over all of my dragster experience to Funny Car and you can’t do that. Now I see Shawn (Langdon) doing the same thing and it is tough. He is getting mad at himself, but he is doing a good job. It’s hard to get used to and it comes with time and patience. I didn’t want to give up on it, but I was really getting frustrated with myself. I still get mad at myself driving that thing because I feel like I can do a better job then what I am doing.”

But more than anything, Sunday marked the culmination of nearly two-decades worth of grinding. Todd, who began driving junior dragsters at 10, lost his first job as an 18-year-old Top Fuel driver after his team owner’s shop burned down. He landed another gig in 2006 after five years as a crew member, but saw that opportunity dry up due to a lack of funding. The same thing would happen again and again over the next few years, leaving Todd wondering if his big break would ever come.

Then, sitting at a Buffalo Wild Wings in 2014 with some friends watching the NCAA basketball tournament, Todd got a call around 10 p.m. The man on the other line was none other than Connie Kalitta. A few hours later, he was on a plane to Las Vegas to help qualify one of Kalitta’s Top Fuel machines. By Monday, Kalitta had offered Todd a contract to drive with his team full-time. In 2017, Todd completed the transition to Funny Car and, as they say, the rest is history.

So, immediately after securing the championship on Sunday, the first person Todd went to see following his first round victory was Kalitta, whom he thanked for the opportunity he thought might never come.

“I went over and thanked him after first round. He just told me good job and that’s all he’s got to tell me. To see him smile and telling me good job is what it’s all about,” Todd said. “It’s an honor to drive that Funny Car. That’s Scott Kalitta’s car and it always will be his car. When they asked me to drive it, I thought that was the coolest thing ever. Connie said he thought I was the right guy for the job and I just didn’t want to let him down.

“Last year it was a struggle. Funny Cars are hard to drive. They will show you who’s boss. But each run you learn something new down the track and I’m still learning how to drive these things. A lot of things have happened within the last two years and I’m really fortunate and lucky to be in this position.”

Knowing what this team was capable of watching Del Worsham do the very same thing just a few years earlier, Todd said he just didn’t want to be the one to mess it up. Although, he admits, he may have had a little bit of additional help behind the wheel on Sunday.

“I saw these guys do this with Del in 2015, so I knew that the opportunity was there. I just didn’t want to be the reason for it not to happen,” Todd said. “It’s pretty special. I think we got some help from up above with guys like Scott Kalitta and Eric Medlen. Things happen for a reason I suppose.”

Just 36-years old, Todd now has an opportunity for the first time in his life to enter a new season as a champion, instead of as an underdog. But after a lifetime of heartache and struggles, Todd said he will not take this moment for granted.

“When I was 18, I got into a Top Fuel car the week after I graduated high school. I was young and dumb. I thought I was going to do this forever. Well, it wasn’t that easy,” Todd said. “All those tough times we went through are worth it now. It makes you respect this opportunity more and more. There were lots of challenges along the way and a lot of times I felt like giving up. My parents were dedicated to me racing. This is the ultimate way to pay them back.”