A HEARTBROKEN PRITCHETT PLANS TO FORGE AHEAD 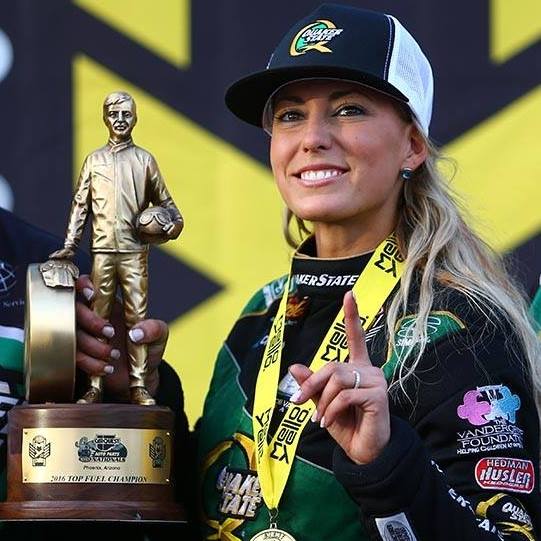 Leah Pritchett said at the onset of her 2016 tour she planned to take her fans with her on the highest of highs and if necessary, the lowest of lows. With little over a month between winning her first NHRA Top Fuel event until losing her ride earlier this week, she has remained true to her word.

"I've always tried to be the real person I am on social media with the fans," said Pritchett. "As a fan, I used to look back on situations and watch them unravel, and there were so many unanswered questions. At the end of the day, I feel obligated to let my fans know where my mental state is."

Simply put, Pritchett, while heartbroken, is admittedly not the type willing or able to throw herself a pity party.

"I only know how to pick that ball up, no matter how heavy it might be and run with it," said Pritchett. "Whatever strength I have, when the chips are down, I am never going to lift off of the throttle. At the end of the day, no one will print the money for me.

“I've got to make it or find it some way. What the timeline is, I'm not sure."

Pritchett has burned up, which she says it’s no exaggeration, hundreds of minutes on her cell phone trying to keep her dream alive.

"Just trying to make something happen that makes business sense for our sponsors and the crew," said Pritchett. "I have to keep moving forward because there is no other option. I want my fans to know, even if I do miss some races I am not giving up."

Team owner Bob Vandergriff Jr. notified his teams on Monday of his decision to retire from drag racing.

"It was really the only decision he could make," Pritchett admitted. "Bob held out and tried as hard and long as he could to make the program sustain."

Initially, Pritchett believed the death of C&J Energy's Josh Comstock would lead to some adjustments to the teams by possibly skipping some races to finish the season but never imagined the whole program would be parked, and put up for sale.

"We spent much of the day Monday considering options for the team and thanking one another for the heart and soul they invested into making this team what it was," explained Pritchett.

And no, the driver who had fought her way from Junior Dragster to Top Fuel didn't break down in tears after the disheartening news.

"I am not a crier," Pritchett admitted. "Going through this kind of thing before, I immediately went into Def-Con 1. I didn't have time to shed a tear; we needed to find someone willing to buy this team and keep what chemistry we had built intact."

Only later after all efforts to sell the team and keep the flame of hope intact were extinguished did she let her guard down in a Facebook post to her followers.

"Yes, there was a tear, and members of the team around me let me know we are still all in this together," said Pritchett. "I wasn't crying about the race car being on the track, or the racing stuff. I think it was only then that all hit me we were no longer going to be able to finish our goal.

"It's as if when you are finally happy, sometimes life comes in and says, 'not so quick."

"It's a quick reminder never to get complacent in this sport; a reminder it can all change in a minute. So, I guess you could say it was more of a tear of appreciation for what we all had been fortunate enough to experience."

Pritchett admits there's a spot in her heart which will always wonder what could have been.

Pritchett said she still has her relationships intact with Quaker State and FireAde, but regretfully there's just not enough capital at this moment to take to another team. She said they are just as heartbroken as she is.

This setback won't stop her from trying to make something happen as long as she is able.

"I'm still on the gas like never before. I don't know how big my tank is, or how much fuel is in it. But I do know it's a lot. It's going to run for a long time."