FIRE ON THE MOUNTAIN, FORD STYLE

The team of Jerry Williams with driver Dale Brinsfield had another strong Fun Ford appearance as they qualified atop the pack with a 6.528/216.69. Following him was defending class champ David Schorr with Bert Kelkboom, Dan Saitz and Doug Mangrum rounding out the field. There was truly something for everybody as this group of drivers represented all parts of the rulebook with naturally aspirated, nitrous, blower and turbo engine combinations. 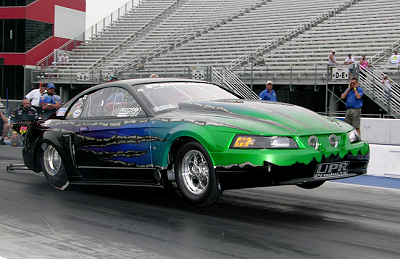 Eliminations in Probe Pro started off in dramatic fashion as Doug Mangrum pounded the tree with a great .004 reaction time to jump out on David Schorr only to watch in dismay as his car slowed when the blower belt shredded. Schorr tripped the lights with a 6.612 at 211.47 while Mangrum slowed to a 7.007 at 180.14 mph. Bert Kelkboom got a 6.645 single after Dan Saitz lost oil pressure  in the pits while Brinsfield flexed his muscle with a 6.522 at 216.69 mph. In the second round, Brinsfield continued his winning ways when his 6.581/214.45 knocked off Kelkboom’s 6.663/211.10 after a brief rain delay. Schorr eased his way into the final round with a 13-second single bye run. That might have been the smartest move of the day as he saved his parts while Brinsfield’s car was slowing down with every consecutive run. Schorr played his cards right as he used the best reaction time of eliminations to jump out to a .057 second head start over Brinsfield off the line. That proved to be the difference as Brinsfield’s 6.617 couldn’t make up that deficit when coupled with Schorr’s 6.661 at 210.24 mph. The winning margin of just .013 seconds proved to be monumental in the race for the season championship as this gave Schorr not only his first victory of the year, but also a tie with Brinsfield in total points. With just one race to go, this sets the stage for what will surely be one of the most dramatic championship battles ever seen in Fun Ford competition. 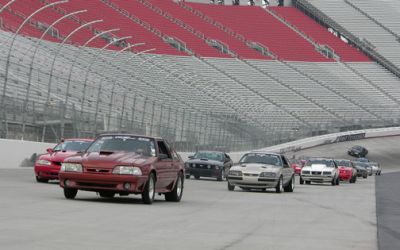 The action in Precision Turbo Street Outlaw was just as spectacular. With all the accolades the team of Steve Petty and Tim Lynch have received in recent years, it was a mild surprise that the duo had just won their first event of the year two weeks prior at Norwalk. At Bristol, they returned with a vengeance as they qualified 0.247 of s second ahead of anybody else. Have a quarter of a second advantage is almost unheard of, especially when you look who else was in the field. Defending class champ Conrad Scarry was there as were former event winners Jimmy Keen and Jared Brunner. Jim Brown and Dennis Lugo rounded out the six car field. 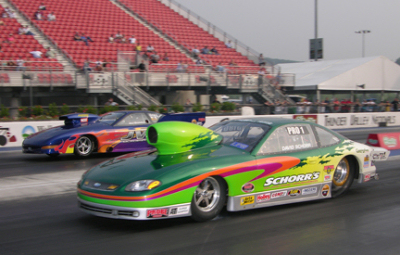 Eliminations began with Conrad Scarry post a 6.975/205.82 beating of Jared Brunner, who was fighting electrical gremlins. Jimmy Keen then took a 7.090 to 8.055 decision over Jim Brown while Lynch pounded Dennis Lugo with a 6.823 to 7.470 victory. In the semifinals, Keen recorded a 7.087 to 7.119 victory over Scarry, which wasn’t as close as it seemed as Keen left with a .189 holeshot advantage. Lynch then posted his best time of the day with a 6.801 at 210.60 mph. The finals saw Keen having the challenge of trying to find a way to defeat the Lynch Mob juggernaut for the second event in a row. Keen did his job as a driver by launching off the line first, but then lifted as Lynch powered by in dominating fashion towards the finish line. The scoreboards showed Lynch with a 6.827/211.26 victory over Keen’s slowing 8.570 at just 135.32 mph. In the span of just two weeks, Lynch left Bristol with the point’s lead on the strength of two consecutive victories and class ET records.

If that wasn’t enough, ProCharger Street Renegade had the closest heads up final of the day. Half a dozen drivers  showed with points leader Travis Franklin leading the charge with a 7.740 at 183.07 during qualifying. Defending class champ Ronnie Wilson made just his second appearance of the year a good one with a 7.903 with Joe Morgan just a tick behind at a 7.919 at 173.99.

On Sunday, the drivers got down to business. Wilson ran an improved 7.877 to overcome Tony Akin’s .060 holeshot while Franklin posted a 7.736 to 8.365 over Ron Cox, his closest rival in the championship points chase. Joe Morgan then advanced over Reggie Burnette, Sr., who did not make the call to eliminations. In round two, had a horrific .696 reaction time which gave Wilson a 7.884 second ride to the finals to meet Franklin, who got the bye. The championship round was one to remember as both driver left the line glued together with just .001 of a second separating their reaction times. Both drivers  motored down the quarter mile door to door with Franklin taking a narrow 7.852 to 7.867 win for his third win of the year, which effectively wrapped up the season championship with two events to go. 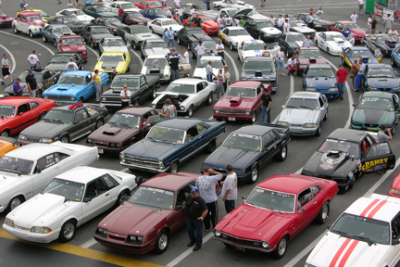 In the heads up index classes, Mac Sibley continued to enjoy a career year as he posted his 4th win in as many appearances to widen his season points lead in Borla Street Bandit. Running off a 10.60 index, Sibley only needed a 10.803 at 122.62 to take the win after Allen Hurley broke out with a 10.566 while trying to make up a .254 second starting line deficit. In Street Stang, Mark Anderson made his second finals appearance in a row count as he assumed the championship points lead in Saleen Speedlab Street Stang with a victory over Craig Sheppard.

The ET Bracket classes saw Dyno Joe Crum take a popular win in his first ever appearance in the finals in Ultra Stang as he defeated P.J. Justus.  Shane Williams used what was essentially home track advantage to grab his first victory of the year in Mod Comp and the season points championship points lead. In the last championship category, Paul Gamino made the long trip from Texas worthwhile as he grabbed his second win of the year in just three appearances – not a bad batting average!

When it was all said and done, there were a lot of grins and back slapping Fun Ford’s 16th Bristol appearance left almost everyone with a great event to relish and remember.