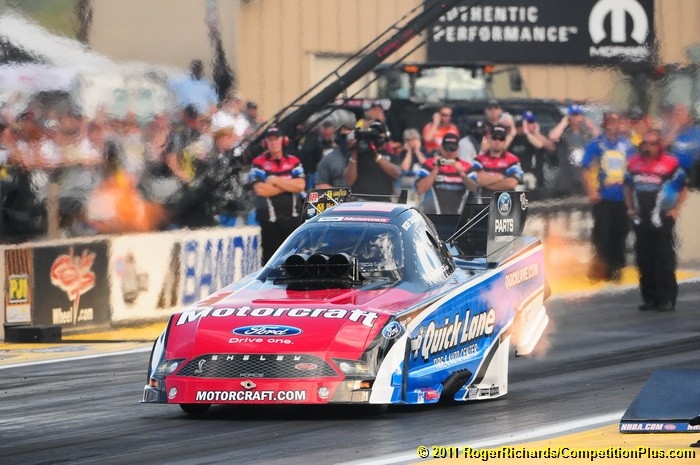 There’s no question safety is a top priority for the NHRA.

This weekend at the Mopar Mile-High Nationals is the three-year anniversary of the sanctioning body having both Top Fuel dragsters and Funny Cars race to 1000-feet, instead of the traditional quarter-mile (1,320 feet).

The move to 1,000 feet by the NHRA came shortly after Scott Kalitta, the legendary Connie Kalitta’s son, and a two-time NHRA world champion, died on June 21, 2008, during qualifying at Englistown, N.J.

Scott Kalitta's Funny Car, traveling about 300 mph, burst into flames and crashed at the end of the track during final qualifying for the Lucas Oil SuperNationals Old Bridge Township Raceway Park.

There’s no question safety is a top priority for the NHRA.

Bob Tasca III supports the NHRA's decision to go 1,000-foot racing and would have no problem returning to quarter-mile if the facilities were upgraded to the proper shut-offs for the 330 mph speeds the traditional distance would present.

This weekend at the Mopar Mile-High Nationals is the three-year anniversary of the sanctioning body having both Top Fuel dragsters and Funny Cars race to 1000-feet, instead of the traditional quarter-mile (1,320 feet).

The move to 1,000 feet by the NHRA came shortly after Scott Kalitta, the legendary Connie Kalitta’s son, and a two-time NHRA world champion, died on June 21, 2008, during qualifying at Englistown, N.J.

Scott Kalitta's Funny Car, traveling about 300 mph, burst into flames and crashed at the end of the track during final qualifying for the Lucas Oil SuperNationals Old Bridge Township Raceway Park.

Kalitta, 46, was pronounced dead a short time after being taken to the Old Bridge Division of Raritan Bay Medical Center in Englishtown, N.J.

The majority of nitro racers support the NHRA's decision to shorten the racing distance. 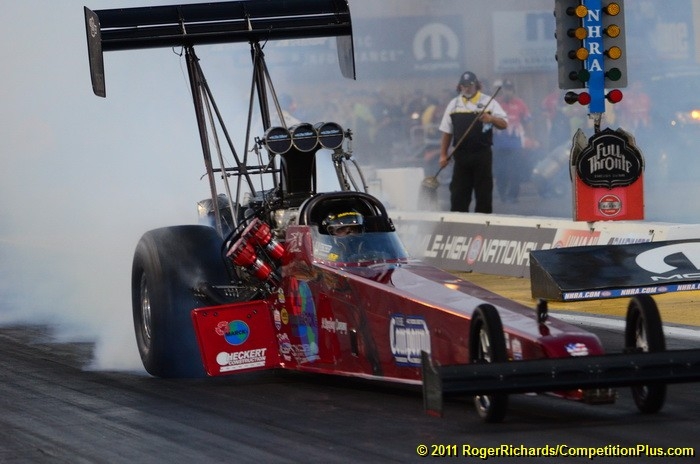 Scott Palmer views the 1,000-foot racing as easier on the budget for low-dollar teams such as his.
“I would go back to a quarter-mile tomorrow morning providing they had all the proper shutoffs necessary for these cars going 330 mph,” Tasca III said. “That is unrealistic. They had a decision to make in my opinion and that was have us slow down to a quarter-mile substantially or let us go as fast as we can go to 1,000 feet. I feel NHRA made the right decision and if you look back three years, the proof is in the results. We have had the closest side-by-side racing in the history of the sport. We have had fewer explosions from a severity standpoint because we are only going to 1,000 feet.

"At the end of the day, it is about bringing the drivers home. No fans that I know want to see drivers get killed, and when everything goes wrong there’s no greater gift you can give the driver than that 320 feet on these short tracks and there are a lot of short tracks out there. I think it is a mute point. You look forward and not back and at the end of the day I do not see a scenario other than dramatically slowing these cars down to ever go back to a quarter-mile and I do not see that scenario happening.” 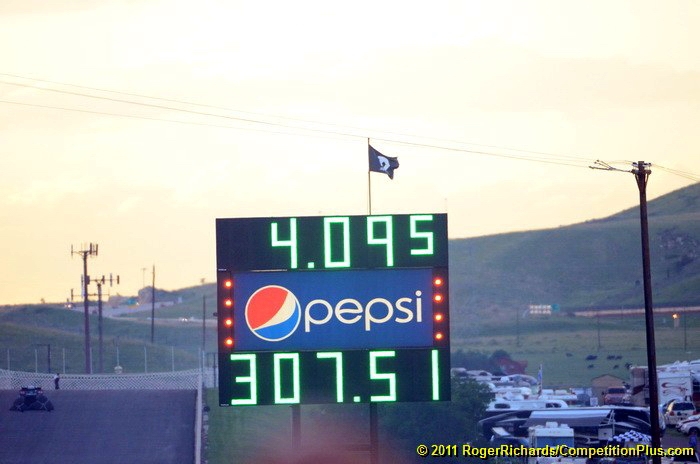 Despite fast runs, in excess of 300 miles per hour, many race fans would rather have slower cars and run to 1320.

Mike Neff also thinks when NHRA made the switch to 1,000 it made sense and still does.

“I think it was the best thing to do with all the options at the time,” said Neff, who is leading the Funny Car standings this season while driving for John Force Racing. “Safety comes first and the racing is closer than it has ever been.”

“My thoughts from day 1 on 1,000 foot were positive,” said Worsham, who is leading the Top Fuel season points chase. “I thought that was the way to go. These tracks were built years ago to not go nearly this fast. If every run was perfect and you didn’t have problems of course you would go to a quarter-mile. The fact is there are problems and no matter what anybody says 1,000 foot is safer than a quarter-mile. I would rather run very quick and fast to 1,000 foot than be handicapped to a quarter-mile.”

The NHRA performed a number of tests in the last two seasons in an attempt to slow the nitro cars. The objective was to apparently return nitro racing to 1320 feet. Testing was suspended last season and hasn't resumed as of July of this season.

Outside of the safety aspects of racing the shorter distance, 1,000 foot is easier on parts. At least Scott Palmer, a small-budget Top Fuel racer, sees it this way.

“From a driver’s standpoint, everybody would like to go faster, but because I own the team it is definitely easier on the budget running to 1,000 foot,” Palmer said. “Back when it was a quarter-mile I ran a few 4.50-second times and that was a 3.87 1,000-foot time, and that was pretty quick for an independent team. Now, the parts last longer and it is easier on equipment. We all like to run a quarter-mile, but safety-wise I just think 1,000 foot is here to stay.” 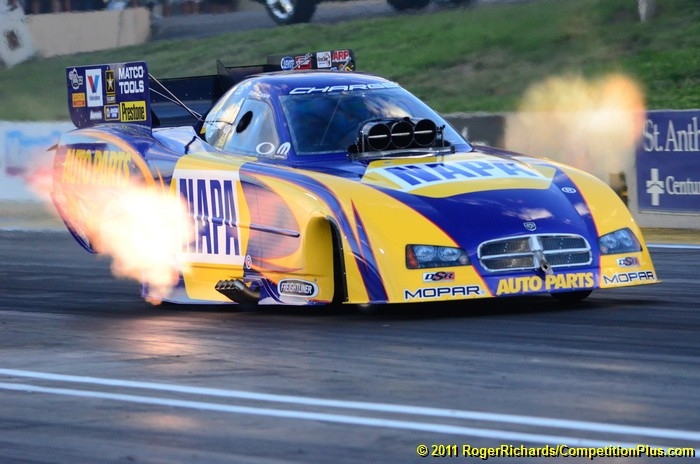 The NHRA suspended its data gathering efforts last season and because of this, 1000-foot racing for the nitro cars appears to be in place for the long haul.

A fair amount of traditionalists still aren't keen on the shortened distance. Tony Pedregon considers himself part of this fraternity.

“Normal is a quarter-mile for me,” said Pedregon, who won Funny Car world championships in 2003 and 2007. “I’m not going to argue with 1,000 feet because it sure makes a lot of sense when we have a limited shutdown area. The way that I thought three years ago and the way I think now hasn’t changed. I would still love to see quarter-mile racing where we have adequate shutdown areas. I think the biggest problem that existed then and now is trying to regulate fuel volume, just the power across the board. They really haven’t done anything to pull power away from these cars. At 1,000-feet in good conditions, Top Fuel cars 325 mph and Funny Cars are running 315 mph. Some of the drivers are still shutting the cars off at 1100 or 1200 feet. I would just go back and say I do not think they have fixed much other than give us a little additional shutdown area. By all means, we do need it, especially at some of those tracks. If I viewed this strictly to benefit me, I would say 1,000 feet is good, better yet how about 600 feet? Because that is going to save us a little bit of money and parts.”

At the onset of 1,000 foot racing, many race fans threatened to boycott until 1320 foot racing returned. Many took their arguments to various message boards.

The bottom line, Pedregron admitted, the 1,000-foot racing hasn’t had an impact on spectator numbers.

“It doesn’t seem to deter the fans,” Pedregon said. “They still stand up and they still come. I think long-term it would still be better for us to look at maybe having both quarter-mile racing and 1,000-foot racing. I’m not saying going back to quarter-mile everywhere because you just can’t do it. They did make a lot of upgrades to shutdown areas and safety nets, but that was one of the issues. Somehow it just seems like they (NHRA) wait for something to happen. I know they (NHRA) are testing restrictor plates, but the proof is in the pudding. They haven’t done much.”