The craziness and contradictions of this fifth fuel-ban season were exemplified by one star racer's exasperation. Since both of his home tracks, Lions (Saturdays) and San Fernando (Sundays), went all-gasoline in 1957, Tommy Ivo had become a force with injected-Buick dragsters. His first Kent Fuller car won Top Gas at the inaugural '59 Bakersfield March Meet and set track records all over California. In 1960, its twice-motored successor extended the domination nationwide during the actor's maiden eastern tour (with teenaged Don Prudhomme crewing). For this year, TV Tommy calculated that one nailhead was real nice, and two were nicer, so, four ought'a be just right for wowing fans anew on the return tour.

NHRA figured otherwise—but not until chassis-builder Kent Fuller had nearly finished the four-wheel-drive monster. Wally Parks, still serving as both NHRA president and Petersen Publishing Co. editorial director, supposedly viewed Hot Rod photographer Eric Rickman's buildup negatives and freaked out. So did studio execs who saw the car on the set during HRM's cover shoot and suddenly realized just what kind of "hot rod" their boy had been driving on weekends. Thus, an innovative gas dragster inspired by the fuel ban was banned before it smoked its four slicks by NHRA, as was the intended driver by the studio paying Ivo to costar in ABC's short-lived Margie series. Stranger still, an overweight orphan that couldn't run within a second of some single-engined AA/Gas Dragsters became the unlikely exhibition attraction of the year, even stealing the show at Indianapolis Raceway Park's first NHRA Nationals.

The California sanctioning body flexed new muscles this season, despite a fourth full year of NHRA-wide fuel deprivation, while battling new controversies. Parks successfully introduced a second national event and a new, permanent home for the first in Indy. One year after uncomfortably partnering with Bill France in Daytona for the inaugural NASCAR-NHRA Winter Nationals (two words), he brought the concept home to California as the first NHRA-only Winternationals (one word).

Simultaneously, Wally was drawn into an uncharacteristically public pissing contest with Scotty Fenn, the sport's most-prolific dragster builder and his loudest critic. Tech inspectors may have been justified for rejecting Fenn's unique front-end "biscuits" as potentially unstable and unsafe. However, when NHRA imposed a minimum-wheelbase rule for rails, nearly all of the approximately 2000 "kit cars" ever welded by Fenn's pioneering Chassis Research Company came up just short.

Not so the standard Dragmaster slingshots newly manufactured by Dragmaster partners Dode Martin and Jim Nelson, Wally's dry-lakes buddy and NHRA's original tech guy. A simmering personal feud boiled over after Fenn publicized a letter asking Parks the infamous "20 Questions." Ultimately, those questions and Wally's respective answers were published in March editions of both Drag News and NHRA's own fledgling weekly, National Dragster.

Another public controversy erupted early into the seventh-annual National Drag Championships, newly relocated from Detroit. Through two days of time trials, IRP's PA speakers mysteriously fell silent following runs by a rookie Georgia dragster driver named Pete Robinson. Only later was it leaked that unprecedented-for-gasoline times as low as 8.46 had repeatedly come up on the Chrondeks, baffling officials who variously suspected rear-wheel starts or unsorted bugs in the new track's timing system. They relented and started sharing Pete's numbers only after the former gas-coupe racer convincingly won a round of AA/Dragster class competition. However, they neither accepted nor credited the earlier 8.46—even after Pete had dominated his class on Sunday and gone on to become overall Top Eliminator on Monday. Drag News would reveal that the 8.58 given as Robinson's low e.t. of the meet was actually a recalculation made arbitrarily by officials who stubbornly resisted giving the young engineer due credit.

While NHRA was hogging headlines all season, a newly aggressive American Hot Rod Association was noisily expanding beyond its Midwestern base. This growth by the first serious challenger to NHRA's sanctioning network was being fueled, literally, by the drug that Wally Parks refused to deliver: nitromethane. Stay tuned as a fierce rivalry unfolds in coming columns. 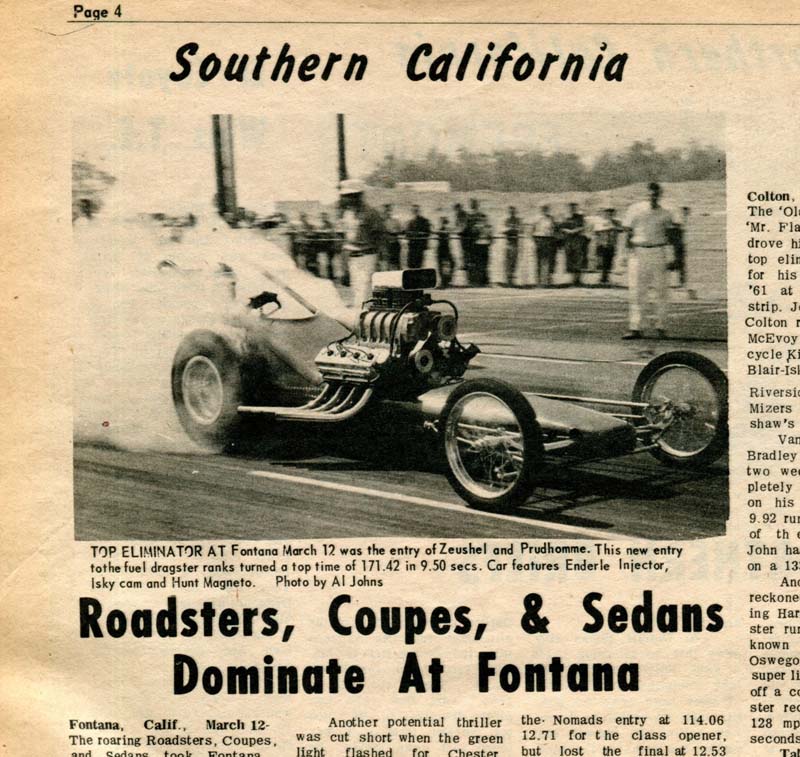 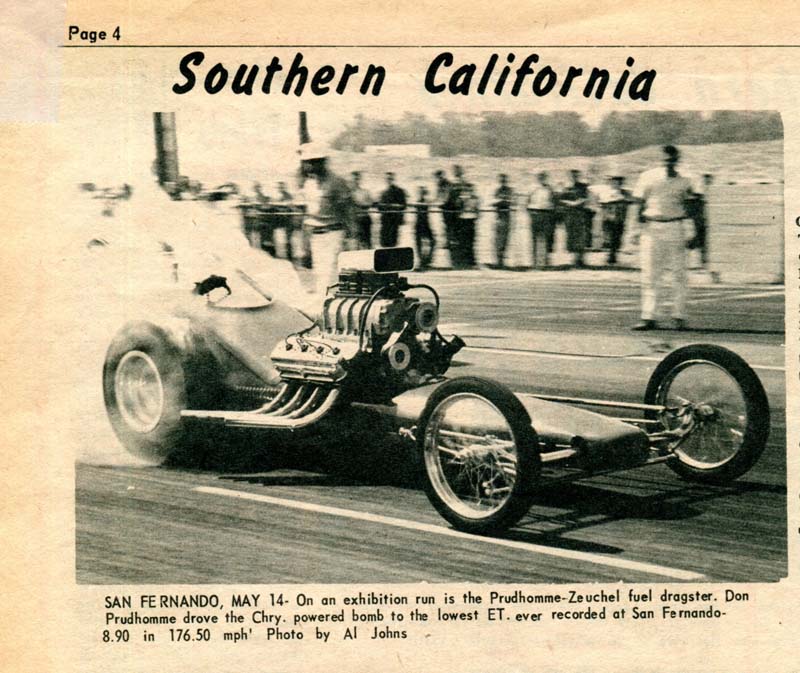 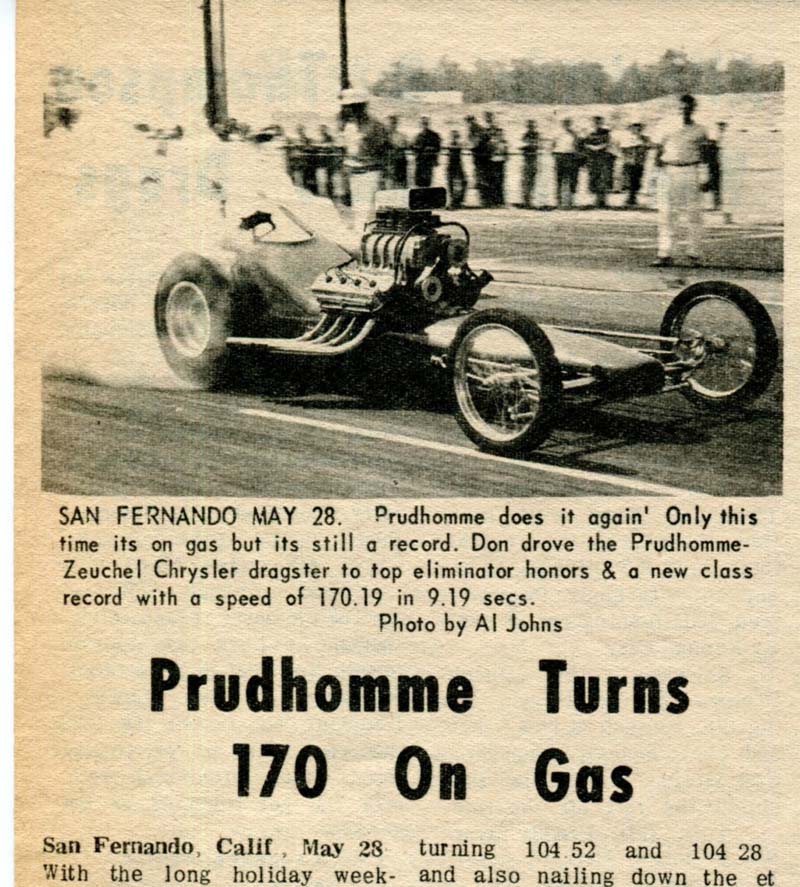 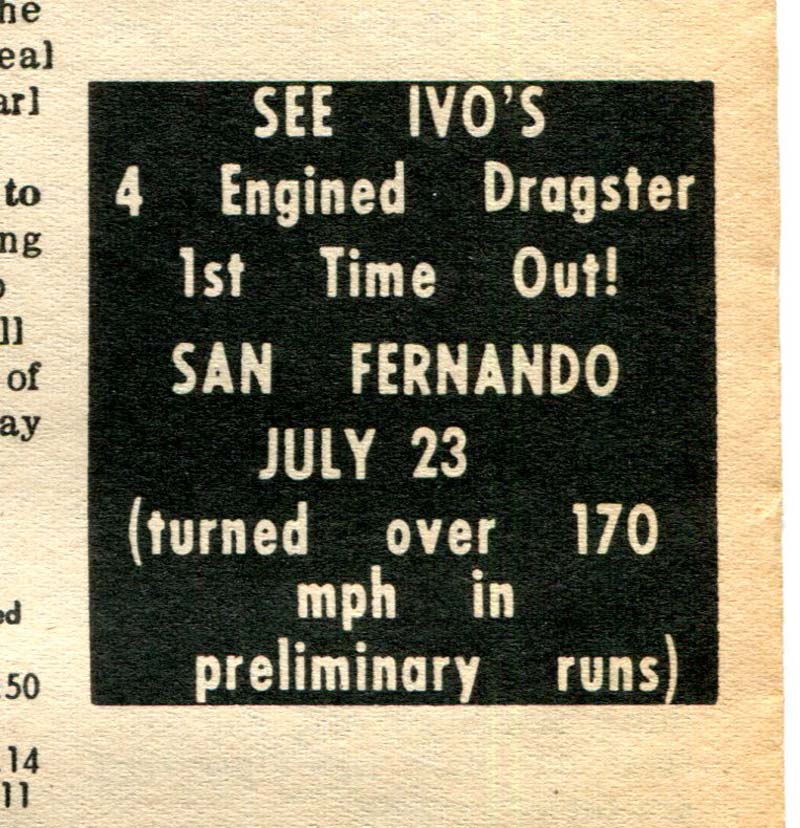