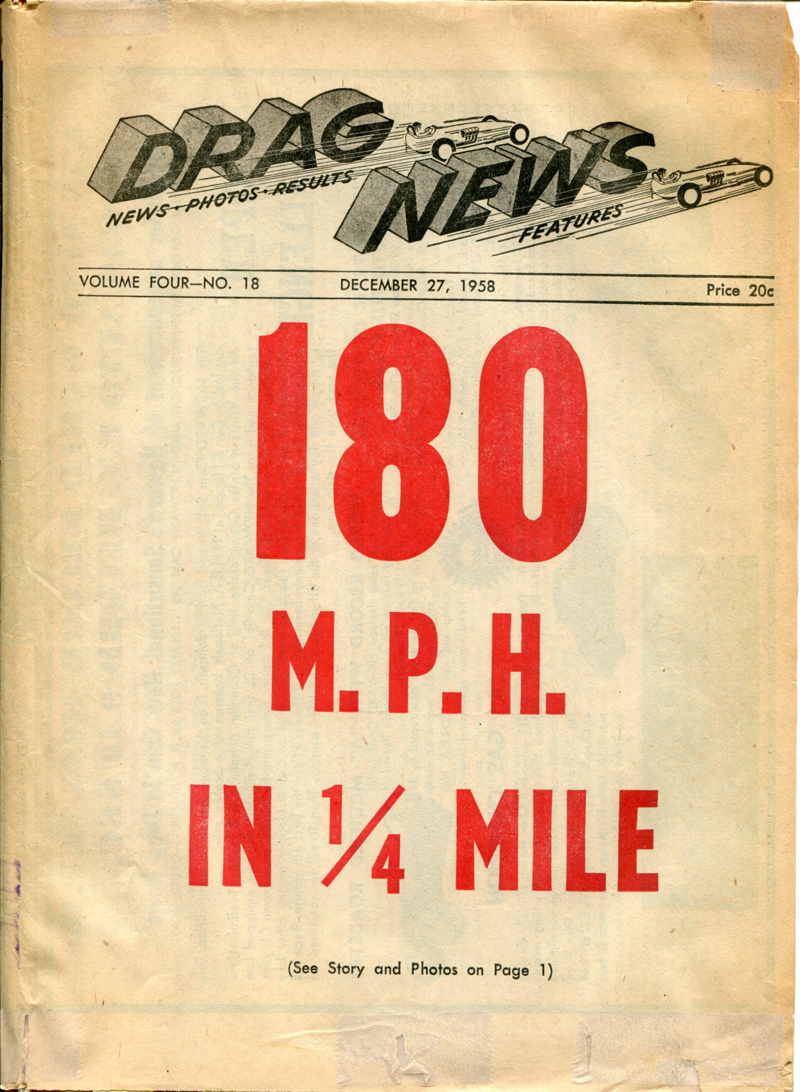 Two individuals from opposite coasts who’d yet to meet in person, Don Garlits and Ed Iskenderian, dominate this installment just as they did Drag News throughout 1958. The season opened to full-page “hero” ads shouting that the 170-mph barrier really had been blasted by some unknown Floridian in a crude, homemade fueler built from Chevrolet frame rails. The year ended with a controversial Dec. 27 cover story declaring that the 180-mph barrier had just tumbled to the same guy, at—suspiciously—the same Florida track.

Of course, nobody out west swallowed either speed; possibly not even the savvy L.A. camgrinder promoting his newest hero in full-page Hot Rod and Drag News ads. If Ed Iskenderian did have doubts of his own, deep down, he’s never admitted to any. A time slip showing some big number was documentation enough for Isky’s promotions, whatever the prevailing track conditions and timing system. Never mind the customary backup run required of a track or “world” record (within two percent, at that time).

This is not to suggest that either run advertised by multiple Garlits sponsors as the first 170 and the first 180 was bogus (as implied by editor Wally Parks’s infamous July ’58 HRM editorial). Years later, when Garlits owned records everywhere, even Californians conceded the possibility that a combination of the Brooksville strip’s concrete bite and prototype M&H slicks might’ve done the trick—maybe? Their skepticism was understandable in an era notorious for inconsistent clocks and unscrupulous promoters. If not for Isky’s “hero” ads, we wonder how many folks outside southern Florida would’ve even heard of these times, let alone accepted them as “world records” (or kept debating them in bench races for six decades—and counting!).

Meanwhile, manufacturers on opposite edges of America were introducing two of the most-significant innovations ever developed for drag racers: M&H Tire Company’s purpose-built, non-recap Racemaster and Chassis Research Company’s mail-order slingshot kit. Some of the earliest ads for these historic product lines follow.

A third publication joins these print pioneers next time, when COMPETITON PLUS resets the time machine to 1959. Among other milestones, we’ll be revisiting the utter humiliation—then glorious revenge—of “Don Garbage” in Bakersfield and Lodi, California.