As if his dominant win at Las Vegas wasn’t enough for Martin Truex to prove he wants the NASCAR Monster Energy Cup Series championship, he had to go and do the same at Richmond Raceway at the Federated Auto Parts 400.

Brad Keselowski started on the pole with Kevin Harvick beside him. No issues on the start as Keselowski gets ahead and Harvick slots in behind him. As the leaders already started catching lap cars, Denny Hamlin and Martin Truex Jr. started making their ways to the front; using the slower cars as picks. Keselowski said that his team struggled with long-run speed and it began to show for him as he started to falter and Truex passed him for the lead. After the pass, Truex wasted no time hurting the chances of other playoff drivers as he lapped Joey Logano and then lapped William Byron, Alex Bowman, and Ryan Blaney in the last two laps of the stage on his way to the stage win.

Kyle Busch got the lead for the stage restart as the action began to heat up. Bowman tried to cut low below Austin Dillon into the corner and ended up running into him which sent Dillon into Byron and gave him a bad tire rub. Byron was saved though as Dillon caught back up to Bowman and spun him in retaliation. Busch got to the lead again and began to catch lapped cars after a few laps. One of the cars in his way to lap was Bubba Wallace, who was racing hard with Bowman, as Bowman was trying to stop from going two laps down. The two battling let Truex catch back up to the rear end of Busch as Wallace finally got away from Bowman; the move possibly set up Wallace for his twelfth place finish later that night, another needed good run for the Richard Petty Motorsports team. Truex went for the lead on the outside but got held up by Michael McDowell running in the same lane; he came down for a crossover and made a little contact with Busch. The two kept It under control and Busch was able to win the stage while Erik Jones got fourth and some points he badly needed at the time.

Busch kept the lead and went on to pull away again as Ryan Newman snuck into the top five and was looking strong. Caution out for Reed Sorenson having a brake issue and getting into the wall; Keselowski got the lead again after pit stops. After a short run, Keselowski’s car started to drop again and Truex took the lead while the field settles until the near disaster for Truex. As green flag stops began, many drivers on fresh tires began to pass the leaders until Ricky Stenhouse Jr went to pass Truex and ended up locking the brakes and got into Truex and spun him. Truex was fine as he only lost a few positions and had no damage, but he was a man on a mission now on the restart. Busch and Denny Hamlin fought on the restart for the lead; Busch was able to get away but not for long. With thirty laps to go, Truex got on the back bumper of Busch and after a short battle he got the lead on his way to a repeat win at Richmond and set up a nice berth into the next round of the playoffs. Meanwhile, Erik Jones was able to rebound to fourth and was only 3 points out of making the next playoff round, but the bad news struck a little later as his car failed inspection, meaning all the points he made up during the race were gone and he is now in a must-win situation going into the Bank of America Roval 400 next week at Charlotte Motor Speedway. 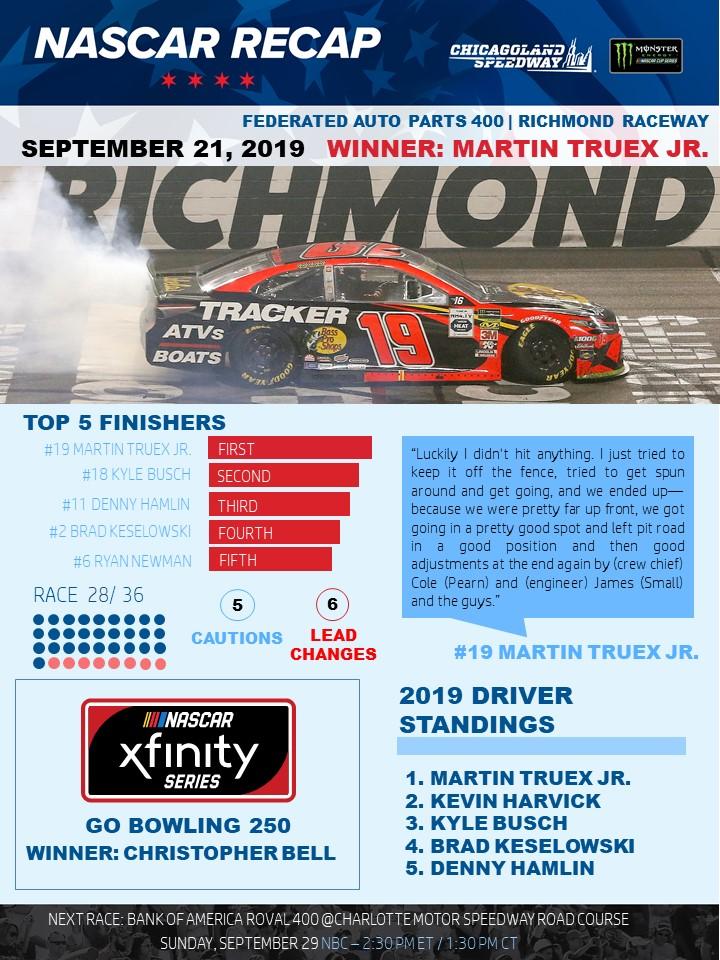